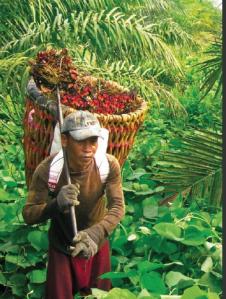 "Significant prosperity", according to the State Secretary - on RM 15 a day?

BN bloggers have been boasting that the State Secretary, Mohamid Morshidi bin Abdul Ghani, got a letter into the UK’s Sunday Times newspaper claiming “the rainforest is not devastated” and that “logging licences are awarded after due process and are not in the personal gift of the Chief Minister”.

However, we can reveal Ghani’s own family are among the state’s top land-grabbers!  Not only that, they have been charged ridiculously preferential rates for the vast tracts of land, which they have been given (by the Chief Minister)!

Abdul Ghani is Sarawak’s top civil servant and should therefore remain strictly non-political.  However,  he is in fact known to be one of Taib’s closest allies and he leapt to his boss’s defence after a top Times journalist reported on Sarawak’s environmental catastrophes last week.

Echoing Taib’s own laughable claims, he announced that “70% of the country is under forest cover” (attempting to imply it was virgin jungle), a contention which has been dismissed as ludicrous by all respected international experts.

So it is all the more reprehensible that we discover that the State Secretary’s own brother, Mohamid Taufik Abdul Ghani, has walked away with over 14,000 hectares of plantation titles for the give away price of just RM 110,000!  No conflict of interest there? 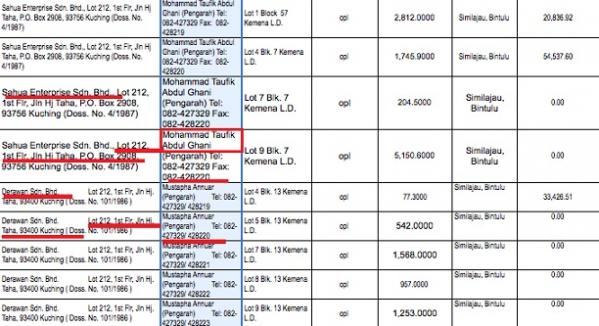 Even more outrageously for a person, who claims to ensure “due process”, the land records show that Mr Ghani has been given the full 60 years of the lease before he has to pay up on the money ! What amazing leniency from the State of Sarawak to the brother of the State Secretary and key political ally of Taib Mahmud!

Most of the plots were offered for no payment. For the others he was given 60 years to pay it back – [2008 Land Registry records

We will be fascinated to hear Mr Abdul Ghani demonstrate fully in this case how “due process” was followed.  Also, how this land could not be seen as having been “in the personal gift of the Chief Minister, Abdul Taib Mahmud”, given such a valuable asset was given effectively for free.  Perhaps he would care to do so in a follow-up letter to the Sunday Times?

The true value of these land titles has been proven

Our researches have shown the true value of the land that was handed to the State Secretary’s brother, because the two companies concerned Derawan Sdn Bhd and Sahua Enterprise Sdn Bhd (which are shown in the Land Records for 2008 as being controlled out of the same office with the same telephone number as that of Mr Ghani) were sold soon after to a subsidiary of Sime Derby called Austral Enterprises.

Details of the two purchases, available on-line via Alacra Store. Derawan went for RM5.15 and Sahua went for RM10.44!

Austral Enterprises Sdn Bhd bought the two companies back in the 1990s for a total of RM 15.5 million.  The Ghanis had therefore managed to make RM 15 million on the land half a century before they have to pay the RM 110,000 they were charged for it by the State of Sarawak!

Note the same address and phone number for both companies, demonstrating the link with Mr Ghani

Sarawak Report would suggest that the ordinary citizens and voters of Sarawak are entitled to feel very angry and outraged indeed at such blatant theft from the state, master-minded through the Land and Survey Office, which is directly controlled by the Chief Minister, on behalf of the family of his top civil servant.

How very objective the civil service must be under such circumstances! 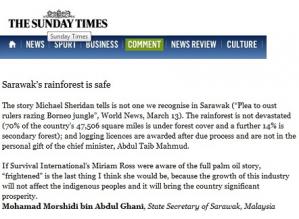 In his letter to the Sunday Times the State Secretary continues to opine that the growth of the palm oil industry is “nothing to be frightened of”.  In this way he dismisses the environmental impact.

However, it is relevant to point out that the very company that is linked to his family, Derawan Bhd Sdn, was last October fined RM 20,000 after pleading guilty to “discharging effluent into inland waters” from its mill.,

Plantation pollution is, of course, one of the worst environmental problems faced by the people of Sarawak, who have found their drinking water contaminated and fish killed by the chemical effluents and mud erosion.  Yet Mr Ghani’s parting point in this letter to the Sunday Times, that:

smugly ignores these dreadful problems, along with the near starvation caused to so many tribespeople by the loss of their lands to this vast agro-business in which is family is engaged.

So once again BN’s top cheerleaders stand condemned by their own preposterous remarks.  As everyone can now perfectly well see, the “significant prosperity” to which the State Secretary refers has not come to the ordinary people receiving RM 15 a day working on palm plantations, but to himself and his family – starting with the RM 15 million that was made selling on the land titles, which Taib Mahmud kindly handed to them!

So much for pompous pronouncements about “due process”!