There is a sprinkling of  Sarawakian women who have gone into the plantation business according to the land records.  One can’t help noticing how well-connected they are!

For example Datin Thersa Toyat, who is a relative of the Chief Minister.  Theresa is also married to the former State Secretary and CEO of the company managing SCORE (Taib’s pet development concept) Wilson Baya Dandot.  In such an important position Dandot should of course avoid conflicts of interest, so presumably this is why the large plantation way over in the Baram region is registered in the name of his wife?

Proper spelling is Theresa Toyat (according to the Register of Companies). Theresa's daughter owns 10% of Amazing Greens and Theresa herself 90%

Theresa is also the highly successful owner of the company Saredah Sdn Bhd (which is the address given for Amazing Green).  Saredah is a cleaning company and has managed to get many lucrative contracts handling the cleaning of state government buildings and offices!

So, it is not hard to understand why so many people in the state complain that there is no chance of getting on in business or of landing contracts or concessions without being connected in some way to the Taibs or their cronies!  Take Sarawak’s top plantation women Raziah and Eliah Geneid – sister and niece of Taib, of course. 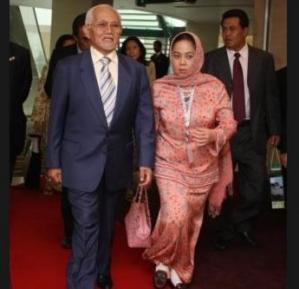 Another lady who features as a plantation owner is Fatimah Abdul Rahman.  She has managed to acquire a very large plantation title in Sri Aman region, according to the records.

Norah is the MP to the Federal Government for Tanjung Manis, which Taib has been pushing as a major industrial region, focused around his vision of creating an international ‘Halal Meat Hub’.

This is planned for after the Chief Minister has generated another fortune clearing the region’s 77 thousand hectares of remaining mangrove forests of course, which he describes as ‘pristine agricultural land’!

As ever mixing politics with business, Taib has also found it appropriate to appoint Norah Executive Chairman of Tanjung Manis Industries, the state-supported initiative that runs the Halal Hub.

Fatimah's land title - note the telephone number.. if you ring it you get through to Tanjung Manis Halal Hub Sdn Bhd!

So what is the distinction between private business, state initiatives and Taib family interests in Sarawak?  None it would seem, because if you ring the telephone number registered for Norah’s sister Fatimah above in the land record (which we did) you will find that you have been put through to the Tanjung Manis Halal Hub Sdn Bhd!

We have referred to another form of female influence in Sarawak, the power exerted by the Bomoh Stella,, who was until recently a trusted advisor of Taib and his household!  Should anyone question the central role she played over the years we attach this picture of the regal family, published in 2003.  The only non-family member featured in the picture is Stella (Australian Kharleen Tashman).  This was before Stella started dying her hair to become the ‘Blond Bomoh’!