Laila Taib, the late wife of Chief Minister Abdul Taib Mahmud, passed away over two years ago and the Chief Minister has subsequently re-married.  Yet, her estate evidently still possesses a multi-million ringgit stake of 13 million shares, which represents 11.32% of the company.

Some latitude can be given for a period of mourning and re-alignment, but the point of an Annual Report for a public company is to make such key facts as key shareholders public.  Two years on it is not appropriate to list a ghost.

How did she get them?

Indeed, Sarawakians are further entitled to know how Laila Taib managed to acquire such a vast shareholding in the first place.  Not least because CMS is largely made up of ‘privatised’ former state assets. Furthermore, the taxpayer maintains a very large investment in the company, with an 8.19% shareholding.  All owing to decisions by the Minister of Finance, none other than Laila’s former husband, Abdul Taib Mahmud, in one of his many key political guises. 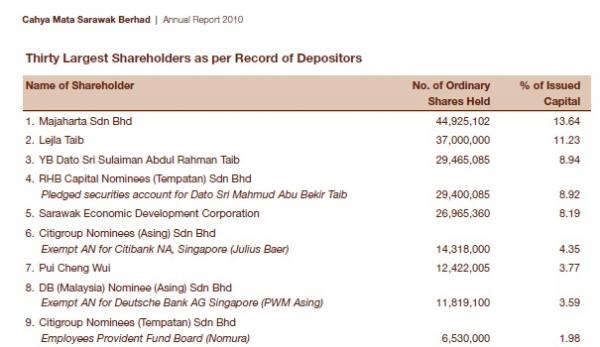 Family business. Laila still has the lion's shares of the shares!

So it is time to cough up the information.  Who IS currently the owner of the largest number of CMS shares?  In particular, is the Chief Minister himself the beneficiary of his wife’s will?  Or, is he the executor of her estate?  Given his key political positions these matters should be made open. 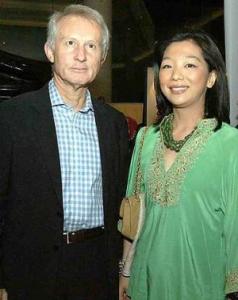 CMS MD, Richard Curtis. Time to print what is going on in his Annual Report?

The truth is of course that the whole of CMS is the most dreadful sham, riddled with outrageous conflicts of interest that the Managing Director, a UK national named Richard Curtis, is obviously only too clearly aware of.

He may have acquired the honorary title of “Dato”, but has he acquired honour from this role?

For not only is the former Mrs Taib the largest individual shareholder of CMS, but the largest company shareholder is Marjaharta Sdn Bhd, which is now widely known to belong to the Chief Minister/Finance Minister/ Planning and Resources Minister’s two daughters, Jamilah and Hanifah.

Glancing down the list of shareholders we can further see that the next two biggest shareholders are Taib’s two sons Abu Bekir (also the MD) and Sulaiman!   At current stock-market prices the Taib family have comfortably over RM300 million worth of shares in the company, which acquires the lion’s share of Sarawak State contracts every year (thanks to the decisions of Abdul Taib Mahmud).

Which returns us to the question of where they got the means to acquire these shares?  Taib was a famously impoverished graduate of Adelaide University, who spent a mere two years in the State Prosecutors’ Office, before embarking on a modestly-paid political career.  Laila came to Sarawak without independent means.  The children were mere students when they acquired their original stakes in this company, made up of the State of Sarawak’s key assets.

Given these circumstances it is a plain as daylight that Abdul Taib Mahmud, who negotiated on behalf of the State of Sarawak the for the ‘privatisation’ of all these assets, ensured that privatisation was very private indeed, right into the possession of his own private family! 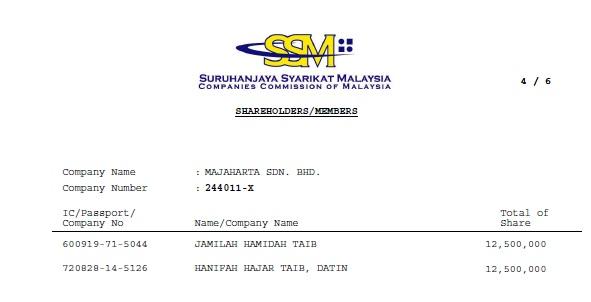 Majaharta - owned by the Taib daughters

So who owns the shares now?

The failure to announce the outcome of the execution of Laila Taib’s will and the destination of her shares in CMS leads onlookers to the conclusion that this matter must present something of an embarrassment to the Chief Minister.

The ownership by his wife and young children of huge chunks of CMS was a thin enough disguise as it was and, were the MACC a genuine anti-corruption body, it would never have passed scrutiny.  But, now the old boy has had to decide where to put these shares next?  Of course, he has just now acquired a brand new young wife, but these are early days and there is a major issue of trust involved. 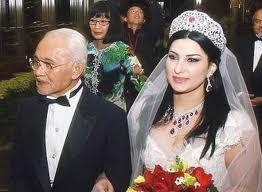 Women are not what they were.  Taib’s own son, Abu Bekir, iis testimony to that, as he battles a RM400 million settlement claim from his own recently discarded first wife.

Sources have also revealed that Taib himself had been so hasty to wed this second time around that he only discovered after the wedding that the buxom Ragat (a relative of his brother-in-law Robert Geneid) was already the proud mother of two children!  Some discovery to come after a fancy wedding by the Head of State!

Indeed, news has been slipping out of rows.  It appears the newly-weds are not only mismatched in years but in interests.  Sarwak Report has learnt that on a recent occasion Taib terrified those around him in his mansion in Demak Jaya by pulling a golden pistol and firing it into the air in frustration, on learning that Ragat had disappeared once more on an outing without consulting him!

It is likely, therefore, that he may be resisting passing Laila’s shares on to his new bride.  But, they have to go somewhere!

Time to return what belongs to the State of Sarawak?

Election poster - is this how Taib wants to be remembered?

Taib must be aware that where Laila has gone he too must travel and that those shares can never go with him.  How Sarawak would have cherished and honoured him had he followed his chosen career and been content all those years with the modest, but adequate salary and pension which are set aside for public office?

Thirty years of disinterested and honest government could have brought so many benefits to his people, instead of the hardship they now suffer as a result of his personal greed.  It is telling that in the end he doesn’t even seem to know what to do with the money and the shares he has taken.  So, why not hand them back and earn at least some respect before it is all too late?