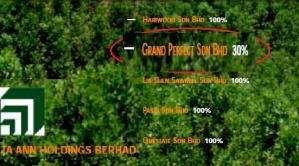 Prompted by the outburst of his own lawyers, Sarawak Report has now dug up further details about Hamid Sepawi’s dubious dealings over the plantation company Grand Perfect Sdn Bhd.

They raise questions of potential criminality on the part of the Chief Minister’s cousin and negligence of the rules of disclosure by two companies he runs, Ta Ann Bhd and Grand Perfect.

It was earlier this week that Ta Ann, the logging and oil palm conglomerate of which Sepawi is Executive Chairman, created a great fuss because the Sarawak PKR leader, Baru Bian, had allegedly said it owned 30% of Grand Perfect.

The lawyers threatened to sue Baru Bian, because they clearly implied such an association was damaging to Ta Ann’s reputation!  They demanded he apologise “for making a gross error in my statement and for any embarrassment, damage to their [Ta Ann’s] reputation and credibility caused“.

Ta Ann up to its neck in improper dealings

However, what the complaining lawyers had failed to acknowledge, was that until recently Ta Ann DID own that 30% of Grand Perfect.  The alleged remark by Baru Bian was merely a little out of date.

They also failed to point out that the two companies continue to share the same Director in Hamid Sepawi.

So why was it so insulting to the publicly listed company that a former subsidiary, which they acquired in September 2002 and sold in February 2003, should be associated with them now?

Is It possible that Ta Ann no longer wishes to be linked to the notorious human rights and environmental record of Grand Perfect, which has torn down villages and grabbed native lands in order to set up a vast acacia plantation subsidised by the Government of Sarawak to the tune of RM180 million?

Nevertheless, Ta Ann’s lawyers should have reminded their Executive Chairman, Hamid Sepawi, that those with embarrassing situations would do better not to draw attention to themselves by protesting too loudly. For, as we have exposed, the shares Ta Ann got rid of in Grand Perfect are now owned personally by Hamid Sepawi, who remains a Director of both the companies.

Furthermore, our researches show that Ta Ann’s handling of the transactions regarding the disposal of the Grand Perfect shares was decidedly questionable.  At the very least the company failed to disclose proper and adequate information to the Stock Exchange authorities and to the Register of Companies.  It also appears they may have misled shareholders as well.

In the stock exchange (Bursa Malaysia) announcement of the disposal made in February 2004, Ta Ann declared that its 30% holding in Grand Perfect had been sold for RM 900,000, which was exactly the sum it originally bought it for in 2002 (see Annual Report above).

Hamid Sepawi is both the Executive Chairman of the Board of Directors of Ta Ann and the company’s major shareholder, owning around a quarter of the multi-million ringgit, publicly-listed company.

Sepawe is BOTH a Director AND a substantial shareholder of Ta Ann!

So we ask Sepawi and Ta Ann how it is that the shares Ta Ann sold in Grand Perfect ended up in Sepawi’s personal posession ?  For, as we disclosed yesterday, Hamid Sepawi is the owner of Gasijaya the private Sarawak-based company that is now the 30% shareholder of Grand Perfect.

As a Director and Executive Chairman of Ta Ann, Hamid Sepawi is charged with protecting the interests of the public shareholders who have invested in the company.  This is why a public company like Ta Ann is obliged to disclose who it is selling assets to or buying assets from. It is also why the law damands disclosure if any of the company’s Directors has an interest in any such transactions.

Nevertheless, in the case of the sale of the Grand Perfect Ta Ann failed to disclose the purchaser, despite claiming that no Director or Shareholder had any interest in the deal.

Below is all that shareholders were informed about when the announcement of the 2004 sale was tucked into the previous 2003 Annual Report as a late addition.

No information about who the shares were sold to! Annual Report 2003

But no mention was made as to the identity of the cash buyer!  And it is clear the stock exchange and registrar of companies were also kept in the dark – for reasons which should surely be investigated. 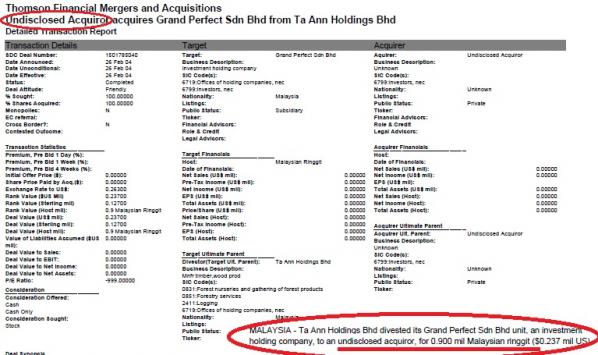 Why the mystery buyer?

So why such secrecy?  We know now that the present owner of those Grand Perfect shares is Hamid Sepawi.  If he was also the mystery purchaser in 2004 or had any form of connection or interest in that sale, then this would represent a serious breach of trust in his role as Director. It would also mean that Ta Ann’s assurances to the stock exchange denying any interests on the part of Directors or shareholders in the deal would have been untrue.

In this context, it should not be forgotten that Grand Perfect Sdn Bhd was a multi-million ringgit company, which had been handed a huge Sarawak State commission by Hamid Sepawi’s own cousin, the Chief Minister, to launch a half million hectare Acacia Plantation

Yet, our researches indicate that Hamid Sepawi was indeed heavily interested in the deal, despite a number of unacceptable gaps in the records

Gasijaya Sdn Bhd was set up as a RM100 in 2001 with 99 of the 100 shares owned by one Laila Binti Suhini.   By June 2004, just four months after Ta Ann sold its shares in Grand Perfect for RM900,000 to the mystery cash buyer, Gasijaya was registered as their owner in Register of Companies documents. 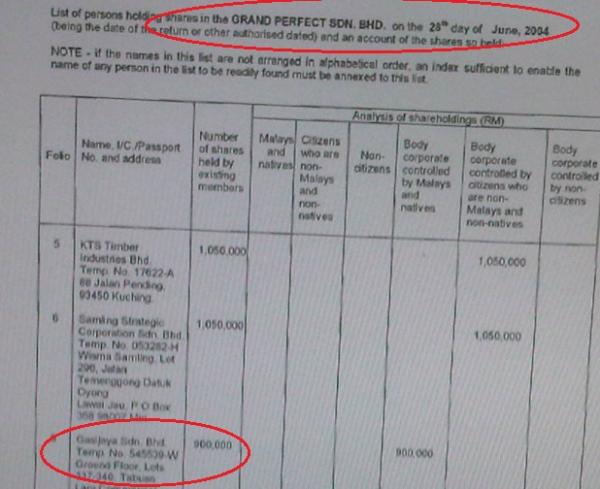 Then, it can be seen, just a few months later in March 2005, Hamid Sepawi bought into the company!  900 new shares were issued at RM1,000 each and were all awarded to him…. for the convenient price of RM900,000, the exact sum for which Ta Ann had sold its shares in Grand Perfect. 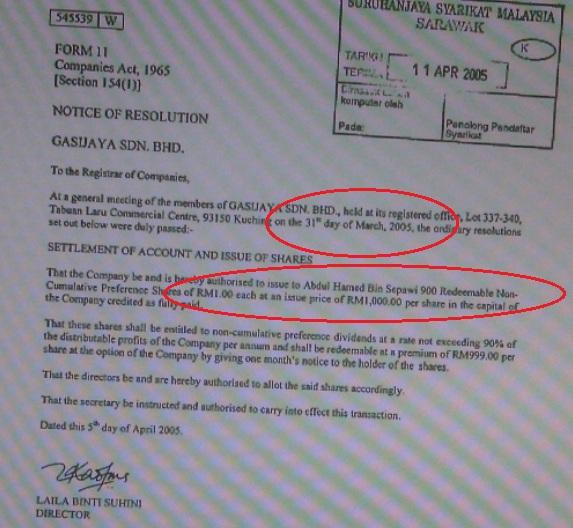 Mr Sepawi paid for the new share issue in cash apparently.  The deal completed the transfer of the lucrative shares in Grand Perfect Sdn Bhd, from the public company Ta Ann, of which he Sepawi is the most senior Director, into his own private hands in little over a year.  And all for exactly the same price that Ta Ann originally invested in the shares. 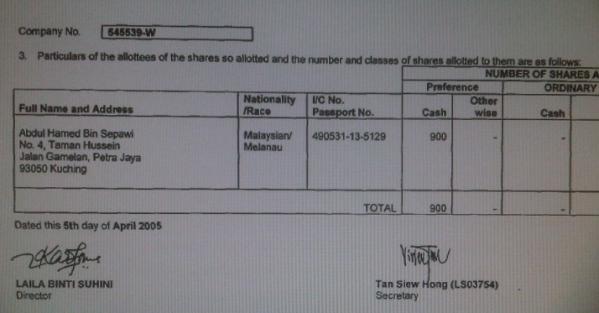 Transferred from a public company, of which he was a Director, to his own hands.

It is also highly significant that at no time during the entire period from 2002 till the present day has Hamid Sepawi ceased to be a Director of Grand Perfect, even during the period after Ta Ann had sold off its shares.

He had duly become a Director when Ta Ann acquired 30% of the company in 2002, alongside representatives of the other main shareholders Samling and KTS, but strangely, he did not hand over the job to the new shareholders after Ta Ann had given up its interest in the company!

Thus, he continued as a Director of Grand Perfect during the months when Gasijaya owned the shares, although he was not officially registered as having any connection with that company.  And, of course, he currently continues as a Director now that he has officially bought into Gasijaya as the dominant shareholder. 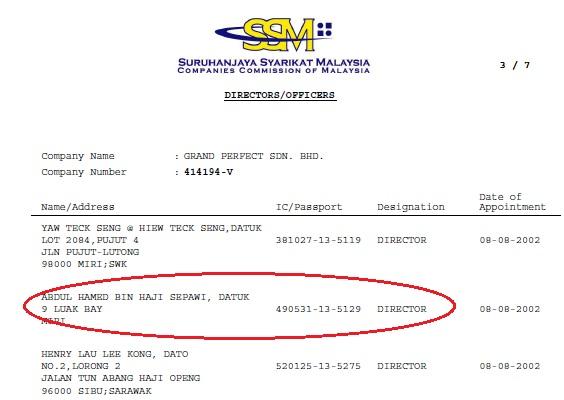 Still a key Director of Grand Perfect, alongside Samling’s Mr Yaw and KTS’s Mr Lau – even though Ta Ann gave up its interest in 2004!

Ta Ann shareholders should surely have been alerted to the fact that their Executive Chairman,  who had sold off their interest in Grand Perfect was himself continuing with his position as Director within that company – a position that must surely have been paid, unless Sepawi was seeking his compensation in some other way?

Show us the documents!

Such dealings are at the very least unethical.  By engineering such a quick transfer of lucrative shares from Ta Ann into his own pocket Mr Sepawi has put himself under suspicion of criminal behaviour.  The Board of Directors of Ta Ann and its leading executives, as well as its legal team, are also implicated in authorising this secretive and clearly improper deal.

Ta Ann should therefore reveal all the information and documents surrounding this suspicious sale immediately.  They should disclose the identity of the cash buyer in February 2004 and Mr Sepawi should explain in detail his links and relationship to Laila Binti Suhini prior to his buying into her company Gasijaya in 2005.

In particular the terms under which he agreed to continue to act as a Director of Grand Perfect after it ceased to be a subsidiary of Ta Ann and became the property of Ms Suhini should be placed in the open for shareholders and the stock exchange authorities to consider!