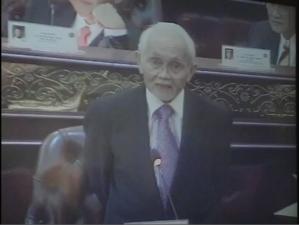 “Not me Govenor!” – Taib is finding himself in the dock time and again as he comes to the DUN to deny corruption!

Taib Mahmud is betraying big weaknesses with his useless attempts to shut up questions in Parliament about his family corruption and then to have those questions removed from the official records.

The first thing it shows is how dangerous he knows such questions are.  To sell a huge area of valuable state land worth RM225 million to a company owned by his own kids for just RM2 million is plain, dirty corruption for all to see.

This is exactly what YB Wong King Wei most recently revealed in the State Assembly with his question about the scandal of Shoreline Development Sdn Bhd.

As we know, there have been plenty of similar thefts linked to other scandals, such as Monarda Sd Bhd and the land round Kuching airport; the handouts to Naim Cendara; the World Heritage site of Borsamulu given to his sister and of course the scandal of the contracts and plantation licences given to Taib’s son Abu Bekir’s Titanium Management, which YB Chong also drew attention to in a series of separate parliamentary questions last week.

The Chief Minister is already suffering the indignity of a public investigation by the MACC, as well as questions over money laundering in Germany, Switzerland, the UK and Canada. Those investigators are not going to have to work very hard with such evidence as the Shoreline Development deal revealed in broad daylight! 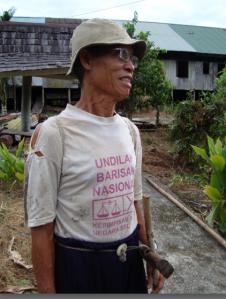 I voted BN and all they ever gave me was this lousy t-shirt!

And what are voters to think with an election just round the corner?  Remember, it has just been announced that Taib’s administration has only been able to allocate a tiny RM3.47 million to help alleviate the hard core rural poverty that afflicts so many Dayaks in Malaysia’s richest state.

It is now easy to see why there is no money to help the starving poor, since Taib has just stolen land that could have raised RM222 million and given it to his own mega-rich children instead!

The second great weakness that Taib’s behaviour reveals is that he clearly has not realised how times have changed. He now faces a real and strong opposition in the State Assembly and in his appearances there he is looking increasingly like an old man in the dock!

He can no longer control the opposition by simply trying to silence it.  Furthermore, his old tactics for suppressing embarrassing information can no longer work. Because, whatever the tame Speaker tries to do in the way of altering parliamentary records and shutting up speakers, the Chief Minister and his cronies can not wipe this information off the internet!

YB Wong pointed out that the lucky owners of Shoreline Development Sdn Bhd, who were able to walk off with a RM 225 million plot of 90 acres for just RM 2 million, were two companies, Plieran Sdn Bhd and Sarawak Land Sdn Bhd. 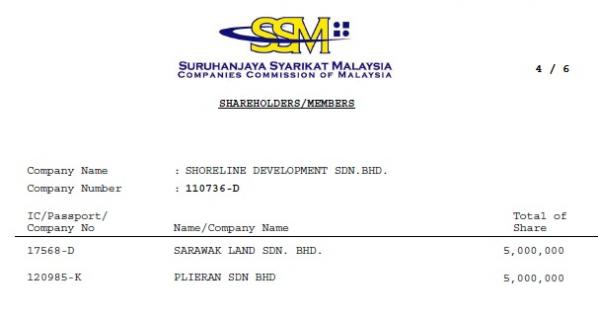 Behind closed doors. Deals involving State Lands should be open and everyone should be allowed to bid. Then it would not end up going cheap to Taib’s family!

So, who are the other shareholders of KBE Malaysia Sdn Bhd?  They turn out to be the logging tycoon Yaw Teck Seng of Samling and Wan Morshidi bin Tuanku Abdul Rahman, a close proxy for Taib’s own uncle and predecessor, Abdul Rahman Ya’kub.

My people are poor because they are stupid!

At this point it is surely right to remember Taib’s own statement just before the election, made in a recorded interview and released on his own website, in which he claimed that he and his family “never do business in Sarawak”, because if they did they would be “hounded by accusations of conflict of interest”.

“If I do business inside the country people will say I use my influence to enrich myself. So, we did it outside” [Taib Mahmud March 2011]

Sarawak Report duly accuses Taib Mahmud of gross conflict of interest and of lying.  He has abused his influence by engaging in a secretive land deal, handing his wealthy children a huge area of state land for almost nothing.  This and numerous other similar corrupt deals have deprived his people of money that could have made their lives better. 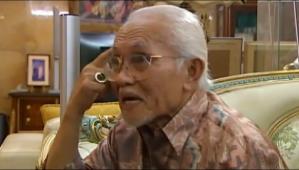 Tap Tap - "If people haven't got it up there, then there is nothing we can do!" - Taib claims his people are poor because they are stupid!

Taib added insult to injury in his interview by saying that his children were rich only because they were so “clever” compared to others.

He claimed that “anyone” who is clever could make themselves rich over 30 years, whereas (tapping his head) he explained that the thousands of desperate people in Sarawak remain poor because they, by contrast,  are stupid!:

“for those who haven’t got it up here (taps his head)there is nothing we can do!”.

So, there we have it.  Taib believes there is nothing he can do to help the poverty of his people because they “haven’t got it up here (tap, tap)”! 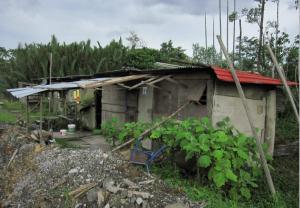 Poor - so you must be stupid !

Sarawak’s Chief Minister clearly thinks money is wasted on his people, since they are stupid.  This must be why he could only find RM3.45 million to help all the rural poor and yet gave his own rich (‘clever’) children over RM200 million in a corrupt land deal.

With such an open statement it would indeed be stupid for any of his people who have heard such heartless and lying insults to willingly vote for BN.

It is no wonder, therefore, that Taib had to blackmail, bully, bribe and cheat to produce a so-called ‘win’ at the last election.  No wonder either that his tactics were so dirty that tens of thousands of people came out on the streets of KL a few weeks later to protest in the Bersih 2 rally for clean and fair elections.  And no wonder that even BN Malaysia are desperate to get rid of the corrupt and arrogant ‘White Rajah’ of Sarawak. 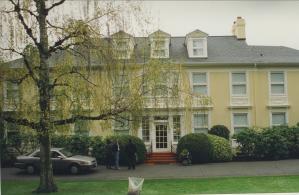 From Samling to Taibs – US mansion

Meanwhile, the connection with Samling goes much further.  Its timber tycoon boss, Yaw Teck Seng, has turned his company into a massive global empire thanks to the many, many logging concessions that he managed to obtain from Taib Mahmud and before that his uncle, the same Abdul Rahman Ya’Kub whose associate has such a big interest in KBE Malaysia, Plieran and therefore the Shoreline Development deal.

Given what we already know of Taib’s corrupt practices, who is willing to believe that he and his uncle distributed all those favours on Samling for nothing?

Plieran (owned by Yaw/Taib’s children) and Sarawak Land are also major shareholders of Borsamulu, the controversial World Heritage site snatched by Raziah Taib from the Berawan and Penan people. 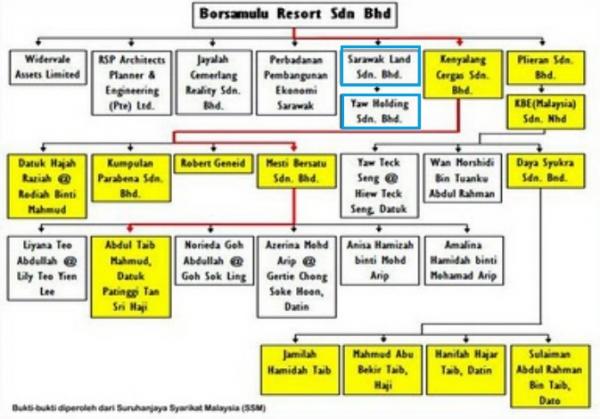 The Taibs and the Yaws are the major shareholders in Mulu.

Plieran is likewise involved in family ventures with the Raziah and her husband Robert Geneid in numerous property deals in Miri, made possible by land grants from Taib’s government.  These include Miri Properties and the Marriott Hotel Miri development.

Meanwhile, Plieran is also one of the largest shareholders in Samling’s key logging subsidiary Lingui. Once again this raises the very conflict of interest that Taib was admitting he would be accused of. 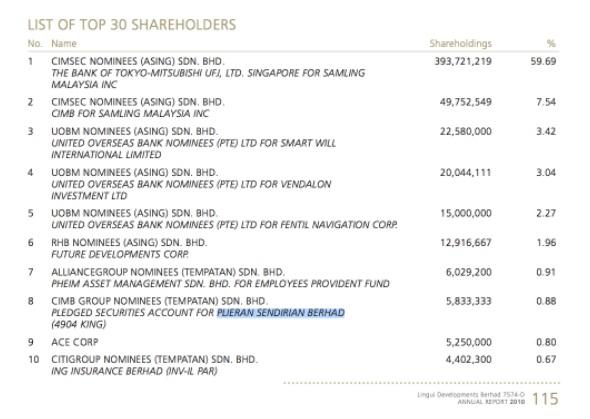 And, of course, as Sarawak Report has previously pointed out, Taib’s cousin and proxy Hamed Sepawi, his Bomoh Ahmed Suiit and the same Wan Morshidi bin Tuanku Abdul Rahman, who is so close to Abdul Rahman Ya’kub, are the three largest shareholders of Samling’s main company, Samling Global, apart from the Yaw family themselves! 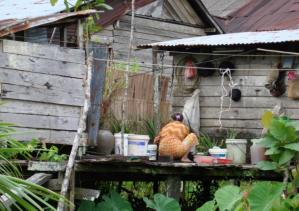 No money from BN for ‘stupid’ poor people in Sarawak

How did Taib’s black magic man, his cousin and his uncle’s proxy manage to gain 5% each of one of the world’s largest logging companies? Was it because they are so clever, or because of Taib’s misuse of his influence as he handed out logging licences behind closed doors to the Yaw family and Samling?

Likewise, how is it that two large mansions in Seattle, North America, so conveniently slipped from the ownership of the Yaw family into the possession of the Taib family for the apparent transaction of just $1 dollar?

Taib puts the success of himself and all his family members down to their cleverness and the stupidity of other Sarawakians.  But he has lied about not doing business in Sarawak.  To the contrary, thanks to his influence the Taib family do almost all the business there is in Sarawak.

The rest of the country are not stupid… they just aren’t related to the Chief Minister.  Taib may not like it, but his corruption is being exposed and he can no longer stop it from happening.