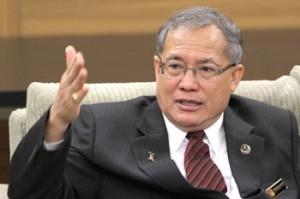 The roads never get built in Riot's constituency - even though his own company was awarded the money!

We can demonstrate that Malaysia’s Deputy Foreign Minister, the BN/SUPP MP for Serian Richard Riot, has also been involved in the disgusting practice of profiting out of projects meant for his own constituency.

In this case a RM9.3million ringgit road building project has been awarded to a company he controls through his son, Akjaemura Jaya Sdn Bhd. 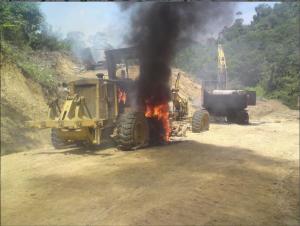 Set on fire - one of the trucks in Tebedi

The issue of roads is particularly sensitive in Richard Riot’s constituency.  The Bidayuh communities of this border area have seen their lands badly destroyed by logging and oil palm, all in the name of ‘development’ by BN.

However, time and again roads that have been promised before elections have not been built.

Indeed, just before the state elections last year, road building equipment was even rolled into the constituency and voters were told to vote BN to guarantee the start of the work – only for all the equipment to be taken away again straight after the election!

How long does Richard Riot, who is now Deputy President of BN’s crony party SUPP, think he can get away with a game like that? 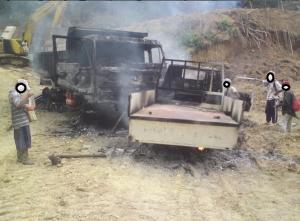 Enough is enough in Serian?

No wonder SUPP lost so many of its seats at the State Election last year, if that is how they treat their constituents!

There is no doubt about the anger in Serian.  It burst into flames not long ago in Tebedu when logging trucks, which had been encroaching onto native lands with the full support of Taib’s government, were dramatically set on fire.

The Bidayuh are famously good-natured and tolerant types, but how often can you lie to them without them coming to some inevitable conclusions? 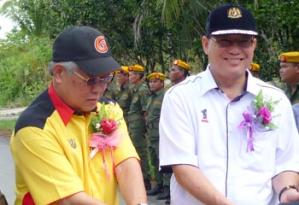 Another road scandal in the area has been recorded, as possibly the most expensive ever stretch of road that was never built.

The Terbat-Mapu 5 kilometre road has seen two ribbon cutting ceremonies, as BN politicians have helicoptered in to take credit for the award of development money for the project.

But it remains unmade!

Look at Richard Riot and his state counter-part Michael Manyin here again boasting of their road-building efforts in the Borneo Post!  Did this project (managed by the Taib/Hamid Sepawi owned company Naim Cendera) ever get beyond the ribbon-cutting stage?

‘Projects for my area’

So, it is particularly sensitive that Richard Riot has his name on the contract for one of these most recent ‘proposed’ road projects in his constituency. 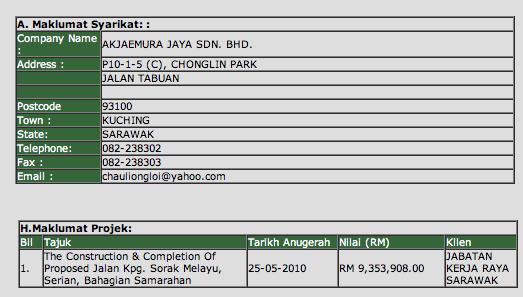 This job has been awarded to Akjaemura Jaya Sdn Bhd, a private company that this MP for Serian and Federal Deputy Foreign Minister of Malaysia controls! 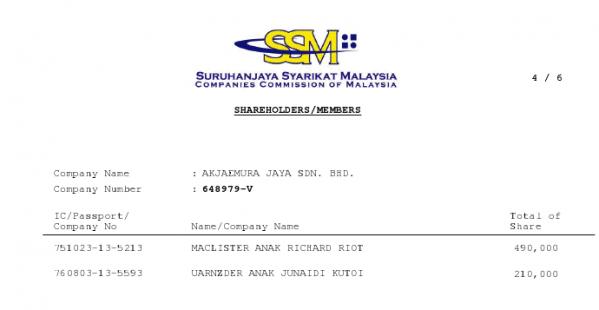 Richard Riot is the big cheese shareholder in this company handling the road project!

For BN politicians the logic of such projects is compelling (as long as no one exposes them). They get to take the credit for the project in front of all their constituents, while controlling the budget!

This means that they can sub-contract the work to another grateful constituent and political ally (for a lot less) and use any spare money for themselves, political hangers on, party business, bribes for headmen etc etc.

If the road actually gets built, well that is an added bonus, but not guaranteed!

We don’t know the details (yet) of how Deputy Foreign Minister, Richard Riot, has spent the money for this particular project.  However, we do know that he should never have been given the opportunity.  Politicians should NEVER take money awarded for state contracts into companies controlled by themselves or close family members.

It is corrupt and we all know why!