How Taib 'SCORES' Mega-Millions From His Dam Projects - Expose ! 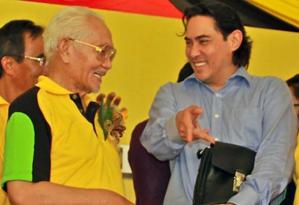 Taib has handed Abu Bekir the Jackpot contract at the Murum Dam!

If you follow the money, the real motive behind Taib’s mega-projects becomes clear.

We can now expose how the Chief Minister has managed to ensure that his own son, Abu Bekir Taib, has won the jackpot contract for the current dam construction at Murum!

And we can further demonstrate that Abu Bekir is also poised to win an even bigger jackpot, when the power for the dam needs transmitting to customers in the so-called ‘SCORE’ industrial region.

The key to their family scheme is Abu Bekir’s major shareholding of the company Sarawak Cable Bhd. 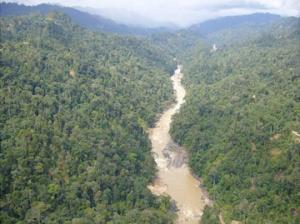 Earmarked for destruction - the next region on Taib's list is Murum, a project currently led by Hydro-Tasmania

This massive contract, awarded by Sarawak Energy, to build a transmission line to take electricity from Murum, represents a major jackpot for the winner.

The advertised recipient is a company called Universal Cable (Sarawak) Sdn Bhd, which describes itself as part-owned by Sarawak Energy itself, Leader Universal Holdings Bhd and Central Paragon Sdn Bhd.

However, our analysis shows that the main real  beneficiary of all state contracts handed out to Universal Cable (Sarawak) Sdn Bhd is none other than Abu Bekir Taib, through Sarawak Cable Bhd.

And, Universal Cable has in fact received numerous other multi-million ringgit contracts from Sarawak Energy, which is 65% owned by the Sarawak State Government and controlled by Chairman Hamid Sepawi, Taib’s cousin and business proxy. 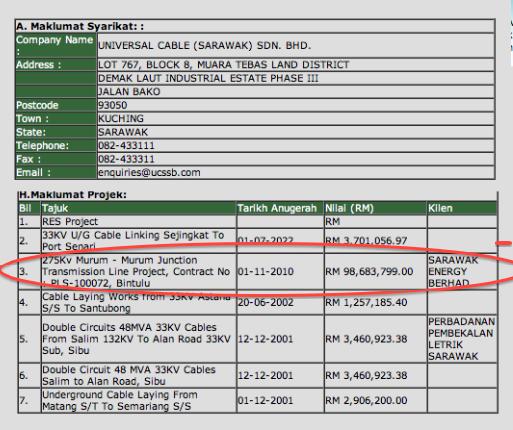 So what of Universal Cable’s, claims that it is a subsidiary of three other concerns, Sarawak Energy, Leader Universal Holdings and Central Paragon?  We can show that it is in fact it is directly owned by Sarawak Cable.

So who owns Sarawak Cable? Taib's son Abu Bekir is the dominant shareholder!

Now that we understand that the real beneficiary of these contracts is Sarawak Cable, let us take a closer look at the ownership of that company.

While Sarawak Energy and Leader Universal and Central Paragon do have shares, we can see that the biggest individual shareholder is the Chairman of the company, who just happens to be Taib’s son, Abu Bekir Taib.  Abu Bekir is also the 52% shareholder of Central Paragon! 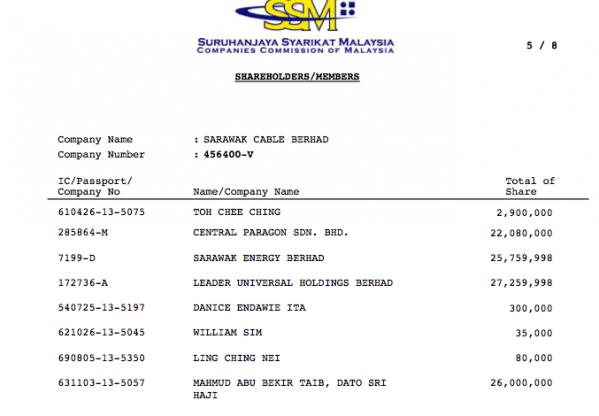 Indeed it has been recently reported that with his latest acquisitions and portfolio of indirect shareholdings in this company, Abu Bekir’s holding in Sarawak Cable Bhd comes to a staggering 42% of this supposedly public company, quoted on the Malaysian Stock Exchange. 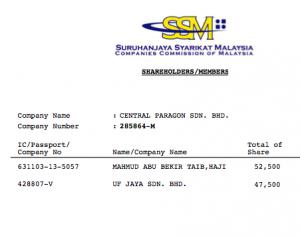 One rule for us and another for Taib

This 42% ownership breaks the stock exchange rule that no single shareholder (let alone the Chairman of the company) should own more than 33% of a public company’s shares.

But, it has been reported that Abu Bekir has made representations to the stock exchange authorities in KL to make an exception in his case!

This may leave little protection for the ordinary shareholders,  but it certainly explains why state bodies controlled by Taib, like Sarawak Energy, are leaning over backwards to give contracts to Sarawak Cable and subsidiaries like Universal Cable (Sarawak) Sdn Bhd! 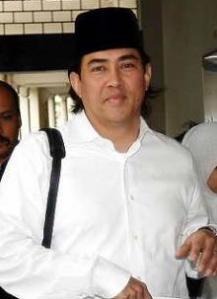 It is clear that the Taibs have developed Sarawak Cable into a company that is in pole position to take on the lucrative infrastructure projects associated with their hydro-electric plans and with SCORE.

Its CEO is already boasting that he is confident that Sarawak Cable will next receive the enormous 500kV Bunuk-Kuching trunk line project, the main electricity conduit for SCORE, worth RM3bn!  With the Taibs in power, that confidence is justified!

However, let us not allow ourselves to imagine that young Abu Bekir’s skill in business or electrical engineering is behind his Chairmanship and dominant shareholding of this now enormous concern.

This modest student would actually surprise acquaintances if it was discovered that he could change a fuse, let alone mastermind a high voltage infrastructure project!

In fact Abu Bekir took a classic Taib route to riches in this case.  His company Central Paragon muscled into the established business of Universal Cable (UCS Sarawak), with the crucial backing of Sarawak Enery’s subsidiary SESCO, in 2008.

The vendor, Leader Universal Holdings accepted a share deal in anticipation of a launch on the Malaysian Stock Exchange and the obvious potential for good contracts, given the ‘impeccable’ connections of its new partners!

The whole company was re-named Sarawak Cable in February 2009 and a month before its flotation, in September 2009, Abu Bekir and his partner in Central Paragon, Yek Siew Long, were parachuted in as Directors.

Shortly after the stock market launch Sarawak Cable issued several million more shares, most of which seem to have ended up in the hands of the company’s new Chairman Abu Bekir! 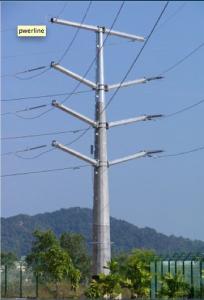 And Sarawak Cable and its dominant owner Abu Bekir Taib has continued to swallow up more companies, thanks to strange decisions by Sarawak Energy to hand over state assets.

In 2010 Sarawak Energy ‘sold’ Sarawak Cable its manufacturing subsidiary Sawarja Timur for what was described as a mixture of cash and shares at a value of RM1.20 a share.

Sarawak Cable forked out RM16million and saw its profits leap the following year by RM3million thanks to the acquisition.

At the time of the deal the company gushed at the possibilities from SCORE:

“With the implementation of the Sarawak Corridor of Renewable Energy (“SCORE”)…..  and the glowing prospects of utilities sector in East Malaysia, the future of this merged entity is undoubtedly bright”[Sawarja Timur]

Now Abu Bekir’s Sarawak Cable has set about acquiring the remaining 25% of Sawarja Timur.  So consider these nice contracts that are now coming the way of Sawarja Timur from Sarawak Energy: 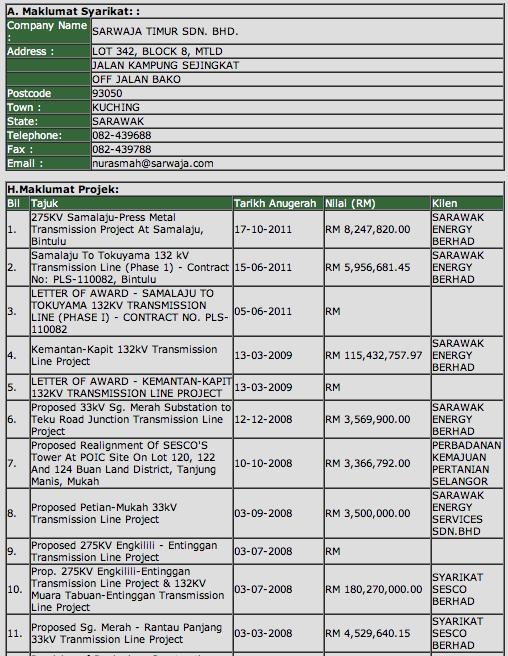 Fat contracts for SCORE from Sarawak Energy are being channelled into its former subsidiary Sawarja Timur - now handed over to Abu Bekir Taib!

These fat contracts to Sawarja Timur mean that, once more, profits that would once have gone back into Sarawak Energy, a largely state-owned concern, have now been privatised into the pocket of Abu Bekir Taib!

Rest assured that Taib will be making sure that as much as possible of all the other profits to be made out of SCORE and his 12 planned new dams will also be going into companies controlled by his own family and then on into their multi-billion dollar foreign bank accounts!

What good for the people of Sarawak?