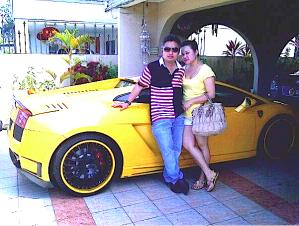 Fast cars - Snowdan poses by his Lamborghini, but most people in Balai Ringin are still waiting for water and electricity

The UK has changed government 11 times since the date that Malaysia was given independence and in the same period France has had 20 Prime Ministers.

However, during that entire 55 years UMNO/BN has grasped onto power, while at the same time calling Malaysia a democracy.

The result has been predictable.  The few families in power have become ridiculously rich, while paying little attention to the often desperate needs of the rest of the people

So, it is hardly surprising that when BN’s old men start talking about handing over control of government they are thinking in terms of inheritance not elections! 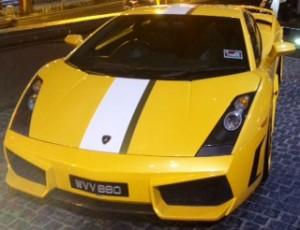 Snowdan Lawan is a typical example of Sarawak’s second generation brat pack of spoiled young men, who have received political positions because their fathers are cronies of Taib Mahmud.

He likes to pretend that he is keen for fast action in his constituency, but his record shows that all he really knows about is fast cars.

His father, ex-Assemblyman Donald Lawan, got rich thanks to hand outs of concessions and vast numbers of privileged Approved Permits (APs) for cars via his company M & D Enterprise.

M & D gained its status in 1980 and is estimated to have received between 200-250 import AP permits for importing luxury foreign cars every year since.

Such AP permits are valued at around RM30,000 each! 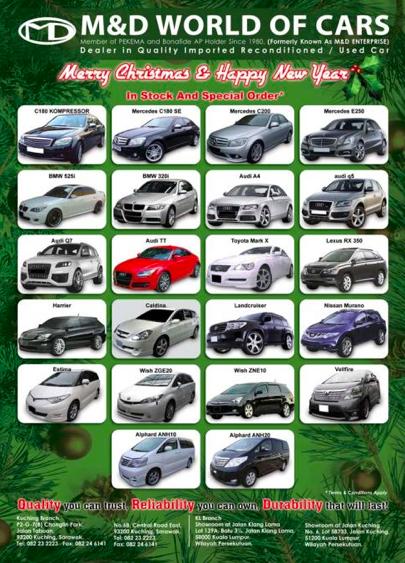 Fancy foreign motors courtesy of your friendly local politician - the Lawan family have been getting the lucrative privilege to sell them for decades. 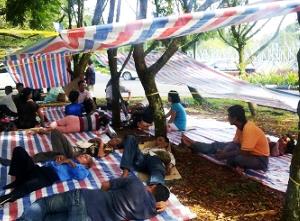 DAP's YB Chong has called for a debate about the land snatches that have forced these protests by Balai Ringin natives in Kuching - but there has been no sign of support from their own YB Snowdan Lawan!

Sadly, Lawan’s record on fast cars is far more visible than any speedy achievements in terms of progress or development for his own constituents in Balai Ringin.

Balai Ringin is notoriously poor and what its people once had is being snatched by Lawan’s land grabbing BN cronies.

Indeed, just this week Mohammed Asfia, Taib’s crony Speaker in the DUN Assembly, banned a debate called for by DAP about the land grabs in Balai Ringin.

Poor residents of the constituency have been camped in Kuching in protest for days, calling for justice against the plantation companies involved.

One of those plantation companies is owned a former BN state assemblyman, Frederick Bayoi Manggie.  Once again, an example of BN politicians licensed by Taib to snatch the land of Sarawak’s people for themselves!

Of course, pop guitar enthusiast Lawan himself wasn’t around himself to support his constituents in their struggle to save their lands.  He left that to the opposition politicians whom he despises. However, even he has started to admit how very poor and desperate his people have become.  In a recent interview with the Borneo Post he acknowledged it was:

‘basic facilities including road, electricity and water supply in his constituency, which was still the main issue among the people of Balai Ringin’.

“The road connecting Simunjan from Spaoh junction to Punda junction is in dire need of attention”, observed the local assemblyman.

Such poor roads must indeed be frustrating for the Lamborghini driving boy-racer YB, whose father is on record as having bribed his opponent to step aside to ensure his election in 2006! 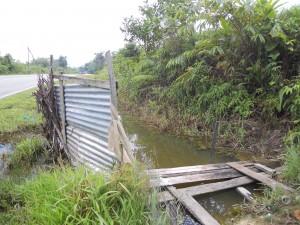 Drinking from a dirty ditch - is this what Lawan refers to as 'speedy development?'

But, there are even more vital necessities of life that this vastly wealthy YB has been in fact very slow to deal with on behalf of his impoverished constituents during his six years in office.

Many of them have no access to clean water, let alone electricity.

Free Malaysia Today has documented many of the instances of the slow pace of development in the constituency of this speed-loving assemblyman.

In a country where people once had access to clean rivers full of fish, his constituents are reduced to drinking from ditches like this.

It was also in Balai Ringin that last year residents discovered to their fury that RM200million government sponsored pig factory had been built, providing the animals with electricity and air conditioning 24 hours a day, while all the people around have yet to receive electricity themselves! 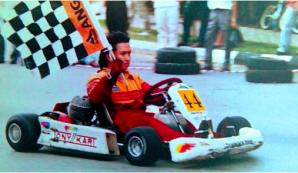 Who is getting the benefit of this pig factory the locals are wondering? Because it certainly is not them.

Of course, everyone knows that the beneficiaries of that factory will be individuals who are closely connected with politicians from BN – how could it be different in Taib’s Sarawak?

However, the pampered multi-millionaire boy racer, who has been placed in charge of this mess by his Dad, has nothing to offer his people except his determination to shut up anyone who criticises BN.

This week he has gone on record to demand that ‘action should be taken against‘ the Iban radio station Radio Free Sarawak, which champions the rights of local people and condemns BN’s corrupt practices! 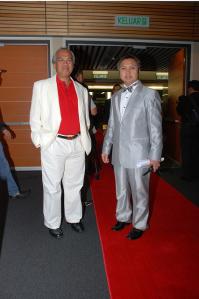 But, shouldn’t Lawan be using his position to take action in favour of doing something about the backwardness of his own area, rather than trying to take action against those that point out his failings as a YB?

Clearly, Lawan is convinced he has inherited a right to rule, because he knows no better.

After all, this is the man who created laughter when he declared that BN should never be voted out of office, because he believed it had ruled so long that it had become like a prestigious ancient university, like Oxford, Cambridge or Harvard!

Such silly comments and attacks on rightful criticism are a poor substitute for dealing with his community’s problems.

They class him in the same category as all the other lazy-minded, car loving, spoilt brats, who are stepping into top positions as their fathers become too old to keep going.

Such boy racers include both Taib Mahmud’s own sons.  Rahman Sulaiman, who inherited Kota Samaranhan and then ran away to Europe and Abu Bekir, whom the Chief Minister is now trying to give the seat to, despite the RM400million divorce case against him by his former wife.

Lawan should stop trying to attack his critics and start doing something for his people.

But, he won’t, since he knows no better.  The only way that the people are going to get any of their needs met is to get rid of BN and do what other countries do, which is to remind the politicians who is boss.

It was Lawan’s own PRS party boss, James Masing, who made the mistake of lecturing voters that he was the ‘Towkay’ after he was also caught robbing the people of Serian.

People in real democracies have learnt that it is only by changing governments and voting politicians out of office, that they can limit corruption and force those politicians to remember to do something to meet their needs, like providing them with water and electricity instead of taking all the money themselves to buy cars! 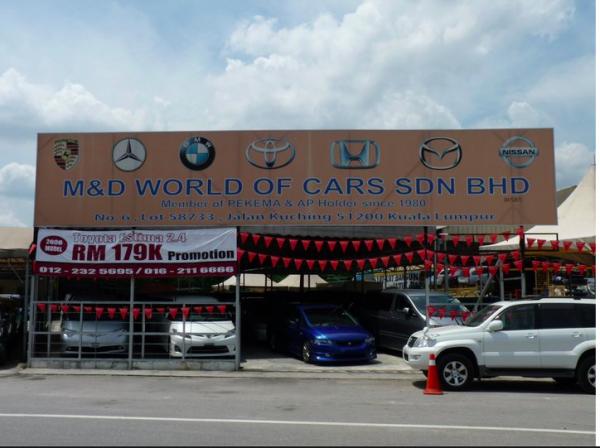 Privilege - Lawan's Daddy's car outlet. AP status makes millions each year for the BN political cronies and YBs who are favoured in return for their political support..