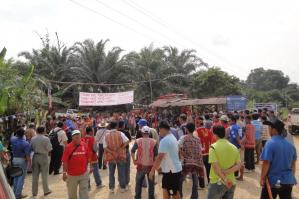 Save our longhouse! The people of Ulu Niah demonstrating against today's eviction deadline from WTK who had given the 2 weeks notice.

To tell people they must give up their ancestral homes: to bulldoze whole longhouse communities and insist these families move elsewhere without fair cause or compensation, seems an inconceivable thing to allow.

Yet in Sarawak it is happening everywhere and often, just in the same way that native lands are being taken and sold from under the feet of the rightful owners.

Many, many communities have already lost their lands in this way, with their beautiful longhouses destroyed to make way for plantations.

There is usually no legal basis for the evictions, yet under Taib these impoverished communities have had no protection or support, whilst the rich and powerful plantation companies have benefitted from the secret backing of their BN political cronies.

Fighting back in Ulu Niah 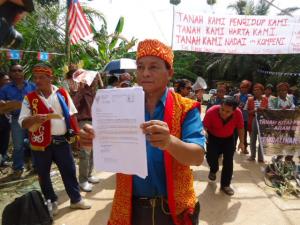 The scenes of protest today in Ulu Niah, not far from Miri represent just one typical example of the sort of outrage that is perpetrated by plantation companies, who seem to think they can get away with anything they like in Sarawak.

People who have lived in the same longhouses at Rumah Umpol for over 40 years were defying a sudden eviction order to move within 14 days, expiring 26th June, today’s date.

Such people appear powerless in the face of the march of Taib’s ‘progress and development’ and police officers were on hand with guns to prevent violence.

However, at Rumah Umpol today there emerged something new and threatening in the attitude of these once downtrodden and exploited communities.  Press onlookers expressed a wave of fear as this community of people, who have been passive for generations, dressed for war at the longhouse village and vowed that it will be destroyed only over their dead bodies. 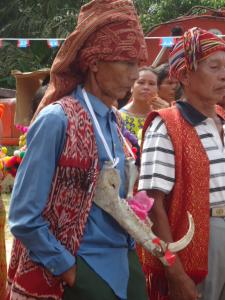 Don't mess with me - the Ibans remember their past and hold to their traditions and are skilfully lethal with their parangs.

Farmers had returned to their warrior roots and donned the chilling apparel that reminded all around of the ferocious capability of these people in their not so distant past, as fighters and headhunters.

Deadly sharp parings, with which any Iban can still in a second strike down a sapling tree (or remove a limb or head), hung threateningly around many waists.

Villagers had strung up traditional amulets and talismen that cursed anyone who dared to enter with instant death. Laid out on the ground were sinister skulls and symbols, ancient signs of spiritual evocations.

Dangerous, ancient ghosts have now been summoned from their graves to launch against the enemy, in this case the drivers of the modern bulldozers expected at any minute.

No surprise, that these have not yet turned up!

Looking at such naked and desperate anger one wonders, have the depredations of the Chief Minister at last gone too far for the Iban population? Could he and his land grabbers have finally sparked a real fight back? 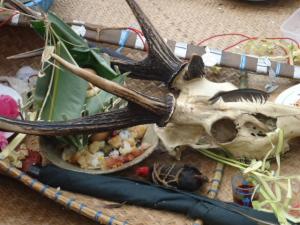 Enter at your peril - sinister traditional spells await the uninvited

Shockingly, the plantation company WTK is seeking to turf the 300 people out of their 60 door longhouse and to snatch their farmlands without offering a single ringgit of compensation.

Neither are they attempting to seek permission or even to include the villagers in their plans to turn the pretty area into another vast oil palm plantation.

The people of Rumah Umpol know well enough what is in store for them and their lands if WTK have their way.

There will be nowhere to live, nowhere to farm and the area will be polluted with pesticides and fertilisers, which will disturb the waters of their rivers and remove all wildlife.

The plantation will cause massive soil erosion and the rivers will clog up and the fish will die. And their home for generations will be bulldozed.  They will have to join the shanty squatters around Miri or Kuching. 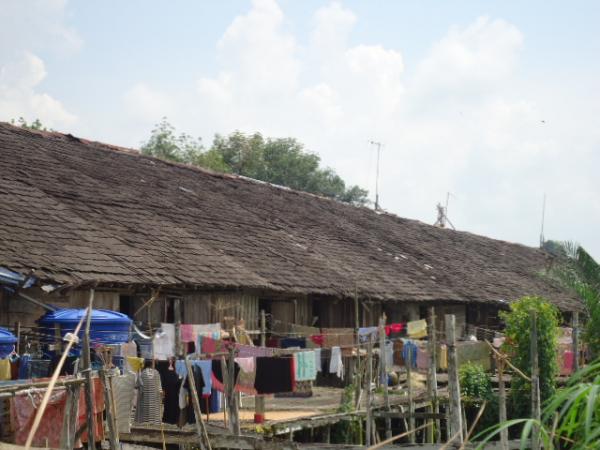 The 60 door longhouse at Rumah Umpol is home to around 300 people. The billionaires from WTK propose to make them homeless and without compensation.

Because, of course, all the back-breaking jobs on offer at these oil palm plantations are always offered to gangs of immigrants from Indonesia, who are prepared to work for ridiculous low salaries, because of the far lower prices back home. 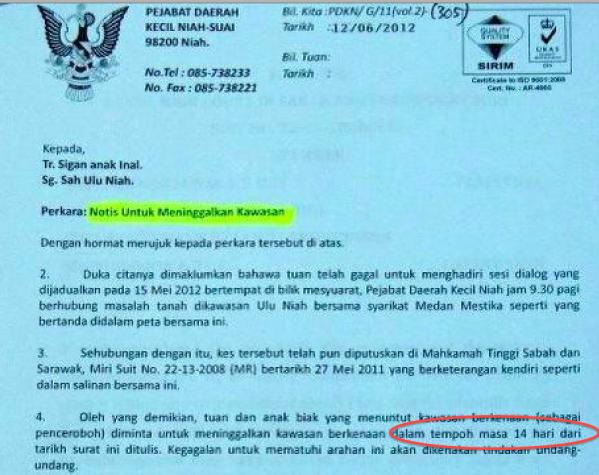 You have 14 days to get out - no compensation, no alternative place? Not our problem! (Best regards, WTK)

The people of Ulu Niah have every reason to be fearful – Click here to see what was done to the people of Rumah Nyawin not so long ago.  These people were unprepared for the ruthlessness of the palm oil companies, a lesson that has been taken to heart by fellow communities. 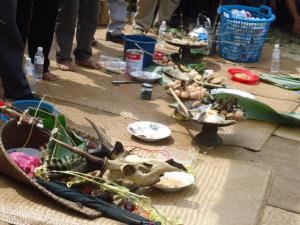 Preparations for war - the Iban community have laid out their talismen and their emblems of war and have summoned up the spirits. Greedy planters have been warned.

Taib’s friendly tycoons of WTK, known as ruthless loggers and planters, have certainly pushed the boundaries in this case beyond all possible excuses.

The Iban community concerned consists of 3 longhouses not far from Miri.  Their ancestors had migrated from Skrang and Sri Aman, back during the period of British rule, in search of more lands for farming and eventually settled in the area of Ulu Niah.

These are not mere squatters. Their acquisition of the land was recognised and documented by the British and the areas were mapped and zoned into specific native areas.

When Sarawak formed the Federation of Malaysia, the State Government of Sarawak actually re-mapped the area and issued boundaries between the longhouses in Ulu Niah. All these maps are stored at the Resident’s Office in Miri. 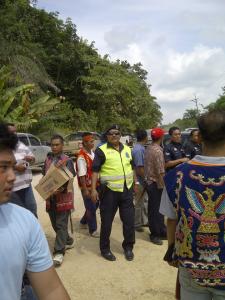 Police - but who has committed the real crime?

So suffice it to say these people have their established Native Customary Rights in the area!

Taib in his management of Sarawak should also remember that Malaysia is one of the many signatories to the United Nations Declaration on the Rights of Indigenous Peoples.

This recognises the rights of the local people to remain unbothered in their territories.

However, thanks to the outrages against the native peoples in Sarawak and in Sabah, Malaysia breaks its commitments under this declaration time and again.

Consider Article 10 of this Declaration that Malaysia has signed up to:

No forceable removal from their lands and just compensation....

Despite these commitments, Taib’s Land and Survey Department (which he personally has charge of in his capacity as Minster for Resource Planning and the Environment) saw fit to hand a provisional oil palm plantation licence for the area belonging to the Ibans of Ulu Niah to his key timber tycoon cronies, the Wong family of WTK and their company Medan Mestika Sdn Bhd.

From the Land & Survey Department. An oil palm lease for the land was handed to WTK's Wong Kei Nai back in 2000

The premium was just over RM2million, according to the Land & Survey records (above), but of course 4,047 hectares of prime oil palm could later sell for hundreds of millions.

Take the land that Taib’s own brother Onn Mahmud has up for sale as a guideline. Onn has been asking RM31,000 per acre, for his own vast plantation.  Since 4,000 hectares is 10,000 acres, this would make the mature WTK plantation in Ulu Niah worth over RM300million!

One must surely ask, therefore, if Taib Mahmud is so keen on ‘development’ for his people, why did he not assist the locals in benefitting from this ‘development opportunity’ rather than handing it at a cut price to one of his key timber cronies and political funders? 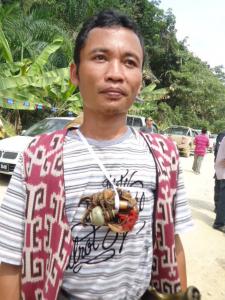 Even the sophisticated business people of Miri dislike being targeted by traditional magic - this is a real weapon that the natives have and they know it!

But of course a provisional licence on Native Customary Rights land is by no means a legal entitlement to do as you please.  It is Taib’s method for allowing the law to be abused at arms length.

Such licences supposedly depend on the agreement of the NCR landowners, although Taib’s government never does its duty in informing people about their rights.

It opens the way for companies, like WTK, who have a shameful record in exploiting people’s ignorance to pretend they have been given the right to snatch all they want.

Dirtly tactics, like paltry payments, shares for headmen, bogus claims, expensive legal suits, false accusations to the police have also been used to bully and bribe native people into giving up their valuable rights to their land once provisional licences have been granted.

In this case WTK’s ‘eviction notice’ turns out to be a document that has no legal authority, according the the lawyer assisting Rumah Umpol, the veteran native rights campaigner, Harrison Ngau.

The plantation company did win a first round in a legal battle for the land in the Miri High Court. This may have been because the presiding judge did not understand the history as to how the natives in the Ulu Niah areas, acquired the lands in question, or it is possible that the High Court of Miri rejected the maps.

However, the matter has been appealed and the case is far from over.  So, as Harrison Ngau has confirmed, the Wongs have no right at all to demand the people be thrown out of their homes and he has advised his clients to stand firm against such threats.

And like more and more communities in Sarawak the people of Rumah Umpol are standing up for themselves. 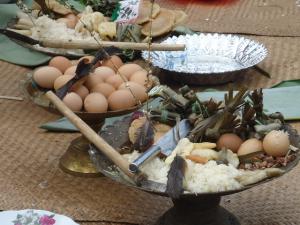 A non-stop Miring ceremony has been launched to keep out the intruders.

Even so, WTK have tried to give the impression their ‘eviction notice’ held legal status, as if authorised by the courts. In fact it has now been revealed it was drawn up by a minor functionary in the local administration.

Harrison Ngau has now confirmed that this so-called ‘eviction notice’ holds no legal standing and is merely a letter issued by a compliant low level official.

What better example of a mean dirty trick to attempt to cheat and bully the local people – and how badly it seems to have backfired!

The villagers, who had called Radio Free Sarawak to publicise their plight, now say they will stay on full alert to prevent any unwanted disturbances. As dark fell they told reporters they were prepared to guard the longhouse all night as they were expecting the wreckers to come and bulldoze their longhouse at any time. 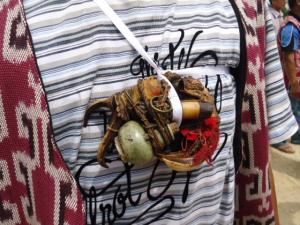 They confirmed that men of the longhouse are armed with parangs and prepared to go to war, equipped with “pengaroh” which are amulets and talisman worn at times of “ngayau” war.

They have also begun a non-stop Miring ceremony at their longhouses to prevent any disruption of their homes. The ceremony included the slaughter of two pigs and feasting was offered to friendly onlookers, including reporters.

The eyes of many in Sarawak are likely to remain on this defiant little community and to watch how they fair against Taib’s bulldozing business cronies.

It is not the sort of resistance Taib’s tycoons have been used to up to now.  But maybe times are changing in Sarawak.