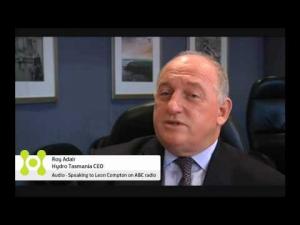 Hydro-Tasmania hit the airwaves in Australia yesterday, in order to defend their involvement with Taib Mahmud’s schemes to flood Sarawak and destroy its major rivers with twelve new unwanted dams.

Roy Adair, the Chief Executive Officer, was responding to concerns raised about the issue on Australia’s TV programme Dateline on Wednesday night.

First, Adair sought to play down the company’s involvement in Taib’s insane master plan  by claiming the company was just advising in a peripheral role.

Despite the fact that their man Andrew Pattle is the ‘Project Leader’ on the Murum Dam and the planned Baram and Belaga Dams, Adair told ABC radio in Australia that Hydro-Tas was just:

But, speaking for the Government of Sarawak, Senator Idris Buang had already undermined such back-tracking:

“We get expertise, we get guidance, we get 100 years of experience from Tasmania…. if there’s any image boost, it just comes naturally, but that is not our intention”.[Dateline, Last Frontier 22/8/12]

Second, Roy Adair made another key claim, which was that Hydro-Tasmania had thoroughly vetted Sarawak Energy Bhd (SEB), headed by Chief Minister Taib Mahmud’s cousin, Hamed Sepawi, before agreeing to take up any role in helping Sarawak’s extraordinary dam projects.

He explained on Australia’s ABC Radio that this meant that Hydro-Tas had made a crucial check to ensure that SEB was a member of the International Hydro-power Association.  He said:

“Now the check that we have made on Sarawak Energy Berhad, and this is the power company that is now heading up the development of the renewable energy corridor in Sarawak .. we have checked that SEB is a member of the International Hydropower Association and following the International Hydropower Association protocol on sustainable development.”[ABC Radio 23/8/12]

When asked what this meant, i.e. what actual auditing had been carried out? Adair waffled:

ABC – And so my question is what auditing do you do? What process do you have for auditing your involvement and is that publically available?

Roy – Well the auditing that we do is that we check basically who is the entity we are involved in, what is the project involved. This is part and parcel of our initial checks on deciding whether we are going to bid for the project in itself. So this is not so much auditing as these are pre-bid checks that we undertake and these are comprehensive and they therefore decide do we wish to be associated with an entity like this. Is there any shadow over them and we have found that in dealing with Sarawak Energy Berhad they have been a company of absolute integrity.

In making these statements Roy Adair implied first that membership of the International Hydro-power Association was a badge of respectability and sufficient recommendation to do business with and second that SEB had been a member of this organisation when Hydro-Tasmania first carried out its supposedly rigorous ‘pre-bid checks’ on the company.

Were the listeners of ABC radio in Australia satisfied by these platitudes?  In which case perhaps they would care to download a membership form for the IHA?

We have established that a Corporate entitity like SEB can join this industry association for as little as a thousand pounds plus a signature in support of the demanding and stringent declaration below!

Pay a thousand pounds and sign up to the above waffle and then apparently Hydro-Tas are satisfied !

NGOs like International Rivers have consistently raised concerns about the International Hydro-power Association’s protocol on sustainability, saying that it is nothing more than a self-serving Industry body attempting to set its own flexible standards and avoid proper regulation.

With particular relevance to Sarawak the NGO complains that there are no human rights considerations or environment standards written into the recent IHA protocol:

“The IHA Protocol is a pure assessment tool. Measuring the respect for rights and standards is not the same as respecting them. The Protocol does not define any minimal requirements of sus- tainability or a bottomline of acceptability for hydropower projects. It does not even require respect for human rights, international conventions and national laws” [Voluntary Approach Will Not Resolve Dam Conflicts, Save Rivers]

Populations from the the Bakun and Batang Ai areas of Sarawak, who have been forced from their lands and tricked with false promises of compensation and wealth can testify only too clearly on Sarawak’s failings on all these counts.

Yet, Sarawak Energy Berhad in fact paid £3,000 to join the IHA, so it is classed as a Corporate 1 member.  What proof is this of anything at all?

Sarawak only joined in 2010, yet it is hosting the 2013 Annual Conference as a Board Member!

But, it appears that Mr Adair was not only misleading about the significance of membership of the IHA. We have established that what he had implied just wasn’t true.

He implied in his ABC Radio interview that Hydro-Tas had checked that SEB was a member of this International Hydro-power Association BEFORE getting involved in the projects in Sarawak, as part of the “pre-bid checks that we undertake”.

However, in fact Entura, Hydro-Tasmania’s subsidiary, has been involved in Sarawak on projects since 2008, whereas SEB only joined the International Hydro-power Association in 2010! 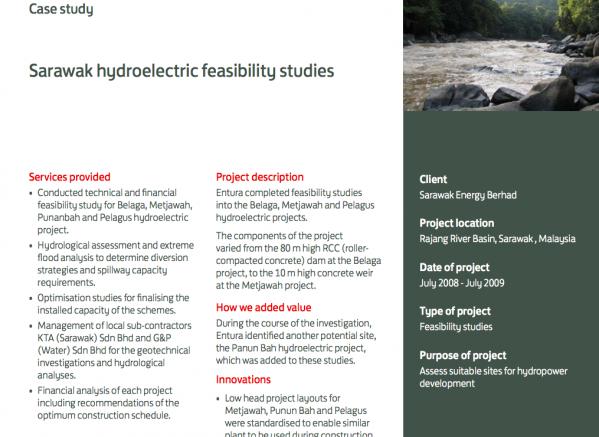 Interestingly, within just one year, by 2011, SEB’s Norwegian boss, Torstein Dale Sjotviet (who is paid a princely $4million per annum) had rocketed onto the Board of this illustrious and sustainability-conscious organisation and so in the same year did Roy Adair!

What’s more, as soon as next year, in 2013, the annual convention of this credible bastion of sustainability is due to be held in Kuching!  Preparations are already being made, according to the Borneo Post, aided by the ‘expertise’ of Hydro-Tasmania!

Indeed the Chairman of Hydro-Tasmania, David Crean, was reported as making a visit to Kuching earlier this year to visit Taib’s Planning Minister Awang Tengah as part of the preparatory exercise for the event.

David Crean is of course the brother of Simon Crean, one of the most vocal politicians in Tasmania supporting the logging of high conservation forests by Ta Ann, a firm Chaired and owned by Taib Mahmud’s cousin, Hamid Sepawi.  Hamid Sepawi is also the Chairman of SEB.  So, what is going on?! 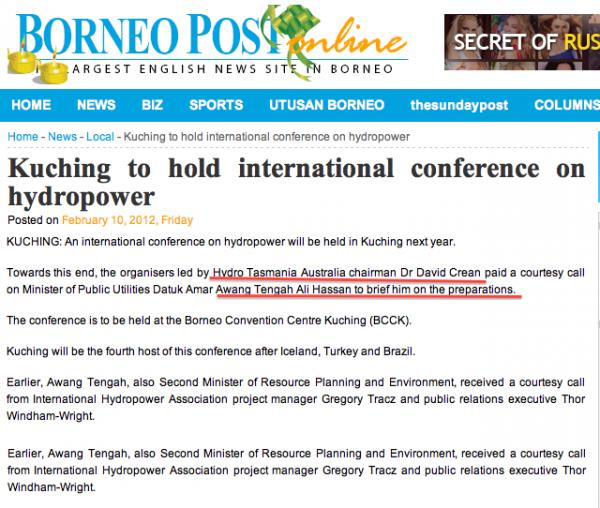 The event is to be held in the Borneo Convention Centre of course! Taib handed this project to his favourite sister Raziah to 'build' and she is now the Chairman of the events centre in Kuching!

– What audits have they made as to the integrity of SEB, the State of Sarawak and the 12 new dam projects that they have become involved in?

– Why are they refusing to give details of the environmental and social impact assessments they have made on these dams (if indeed any have been made)?

– Their Project Leader, Andrew Pattle, has acknowledged that safety, social responsibility and environmental standards are lower in Malaysia than Tasmania.  Why is that acceptable to a company that boasts that it only operates to the ‘highest benchmarks’ of international standards?

– Is it acceptable to flood hundreds of square miles of the Borneo Jungle and displace hundreds of thousands of indigenous people, who own that land for a series of dams for which there is no electricity demand and no demonstrable business plan?

– Why is Hydro-Tasmania pandering to the megalomaniac mega-projects of a depraved multi-billionaire, septuagenarian dictator, who is even under investigation for corruption within his own country Malaysia?

There are two final questions that Sarawak Report would like to put to Mr Roy Adair.  Is there anything he wouldn’t do for money and how stupid does he think we all are?