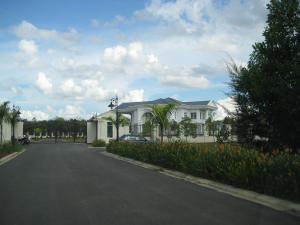 How did Tengah afford this on a few thousand ringgit a month?

Yet another ministerial mansion has sprouted up in Kuching and it tells us all we need to know about the corruption of the state.

Locals in the surrounding district of Petra Jaya have been left wondering how it is that a state minister, who receives approximately RM17,000 a month, has been able to possibly afford such an enormous construction?

How, one asks, could such a position transform a modest man into a spectacularly wealthy one? 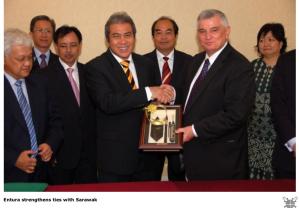 In line for succession?

Indeed, on receiving this post the youthful Awang Tengah was immediately judged by political observers to be the key new favourite of the Chief Minister and his likely successor.

In fact, it is a universal truth that mad dictators always try to pass on their jobs to their sons and we should wait for announcements shortly regarding Abu Bekir Mahmud Taib in this respect and nobody else.

However, it is without doubt that Tengah, whose brutal features resemble those of a none-too-intelligent boxer, is currently one of Taib’s right hand men, jetting around doing his deals on the demented mega-projects of SCORE.

Meanwhile, Sarawak Report has investigated the details surrounding a sensational case, back in Tengah’s home region of Lawas, that goes a long way towards revealing how the Minister manages his affairs and how he and his family have suddenly become so rich.

The case involves one Encik Sia Tangi, who together with his sons was accused of setting fire to the office buildings and staff quarters of a company named Laras Jaya Construction, at the water treatment plant which it has been contracted to build in Long Kuton, Trusan.

The destruction also included two excavators and three cement mixers on the site and the penalty for these men, if found guilty, was a maximum imprisonment of 20 years. Luckily for them the court discharged the case and they have walked free.

But, consider the background to this affair.  Sia Tangi has been complaining since 2008 that his three fields in Trusan were confiscated by the state to construct the water treatment plant, but that the much publicised compensation payments (amounting to a total of RM473,625.35) were made to somebody else!

Every time he queried and complained about the situation he was ignored by the officers of the State Government. Neither the Native Court nor the District Officer would respond to his lawyer’s letters.  In response Sia Tangi obstructed the building of the plant by all means possible, including planting oil palm on the site which was eventually ripped out. 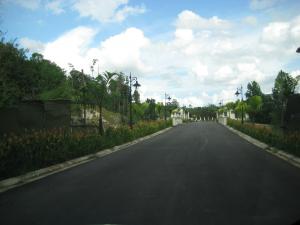 The driveway into Awang Tengah's new house is as impressive as the mansion itself!

Remember this is Awang Tengah’s own home area and the Minister clearly has found the matter extremely annoying.

Some months back he used the platform of the DUN itself to rail at Mr Sia Tangi personally for holding up the water treatment project.

However, for years Tengah and all the agents of the state government have been refusing to reply or take any notice of the valid claims and complaints of this native customary land owner.

The Lawas District Officer, who had handed the compensation to others, did not even turn up at the High Court in 2009, where it was ruled that those compensation payments should be quashed and that Sia Tangi’s complaints should be addressed.

Even after this court victory to Sia Tangi the Superintendent of the Land Custody & Development Agency and the District Officer have failed to respond or rectify the situation.  Instead they have ignored the court.

Under the circumstances few would blame Sia Tangi and his sons if they had indeed been responsible for the fire in the face of such injustice.  This land, they say, was taken from them with the payment going to somebody else! 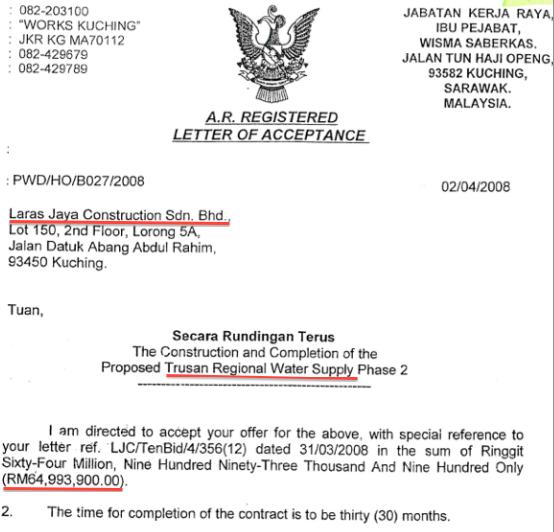 So who are the beneficial owners of Laras Jaya Construction Sdn Bhd, the company that Awang Tengah, Second Minister for Planning, has been railing on behalf of in th DUN?

People might assume they would be the same shareholders as the sister company Laras Jaya Sdn Bhd, which is owned by the construction magnates Kuo Ing Sing and Kueh Hoi Lai.  After all the companies share the same address in Kuching. 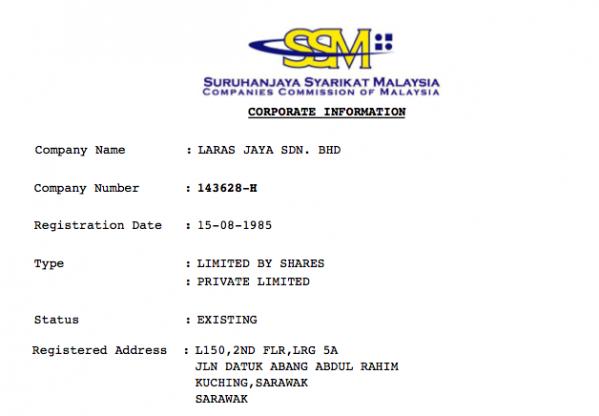 But, in fact the shareholders of Laras Jaya Construction Sdn Bhd, also based at L150/5A Jalan Datuk Abang Abdul Rahim, are completely and utterly different. The dominant owner is none other than one Awgku Jinal Abedin Bin Pgn Haji Jawa. 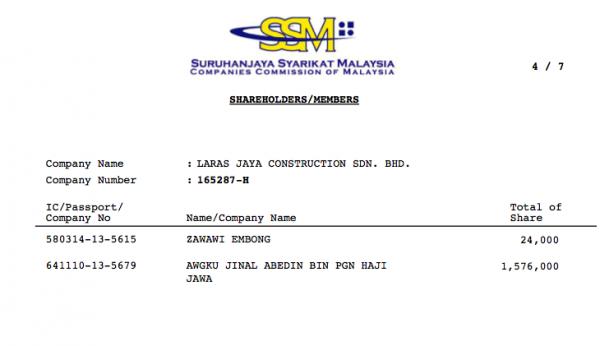 Awangku Jinal is none other than Awang Tengah’s brother-in-law (married to his wife’s sister) and the man who is widely regarded as the Planning Minister’s main business proxy!

The Laras Jaya group clearly need to explain their unusual pattern of share ownerships.  Another sister company at the same address shows a shared relationship between Kueh and Awangku Jinal, this time with Jinal acting as a minority shareholder. 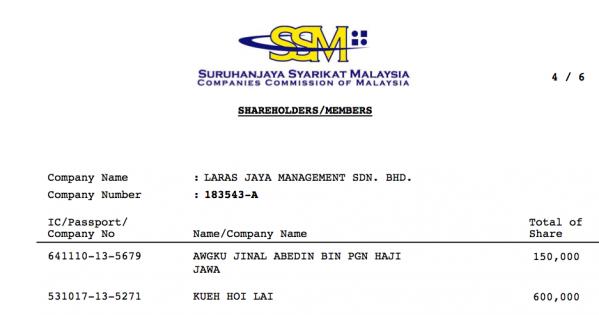 Laras Jaya Management has had its own share of state contracts, like Laras Jaya Sdn Bhd. These companies are controlled by Kuo and Kueh

So, who is getting what from this relationship and why has the State Government of Sarawak handed out a massive RM68million project to a company owned by Awang Tengah’s family without any form of proper tendering,

Man of political stature? Or just a convenient yes man for Taib?

all within the Planning Minister’s own constituency area?

How are we to know what the real costs of this project might have been when no other company was given the opportunity to bid for the work, which was all paid for of course by taxpayers?

Sadly, under Taib/BN people in Sarawak have become so used to the practice of Ministers awarding themselves and their close families these huge projects that it is necessary to issue a reminder that this is a form of blatant conflict of interest and political corruption using money from the state!

How dare Awang Tengah exploit his political position to secure his close family such an enormous project!  And how dare he build himself such a blatant monument to his own corruption as this vast house in Kuching?! 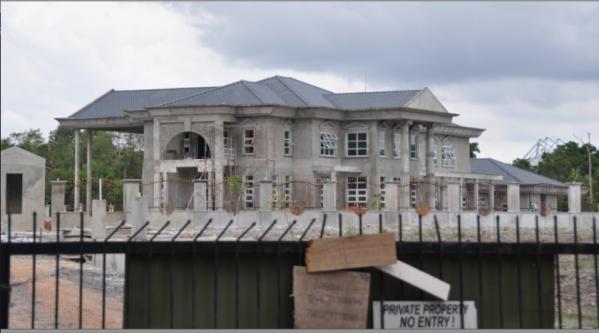 Under construction - "private property", but paid out of the public's money!

It is a clear offence to exploit the responsibilities of public office and to abuse that position of trust to make money for oneself.  However, Laras Jaya Construction Sdn Bhd has been awarded numerous other such projects by the State of Sarawak in recent years as the official records of Malaysia’s Construction Industry Development Board can testify! 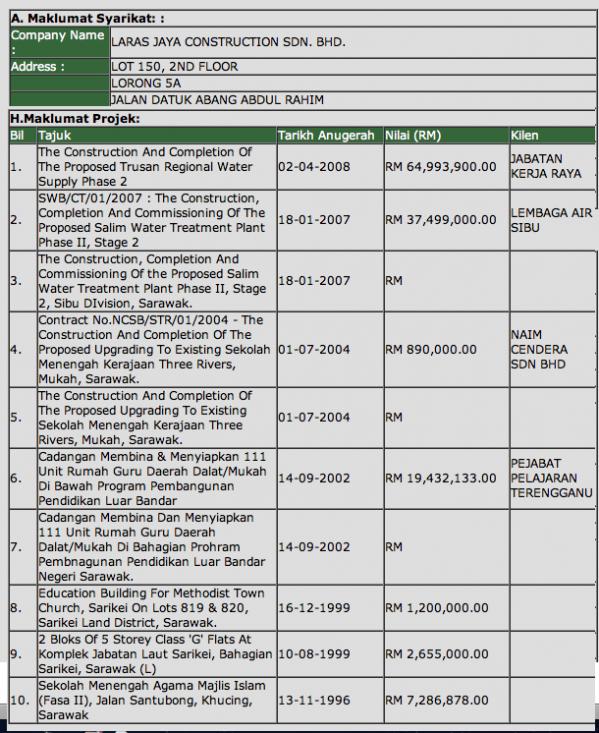 The mystery of the missing compensation

So what of the strange issue of the disputed compensation over the Trusan water treatment project and Sia Tangi’s protests, which brought this whole disgraceful matter to public attention?

The amount of money that the state agreed to award for these three fields was an extremely substantial sum.  It totalled no less than RM473,625.35 and at the time the compensation was announced owners were invited to put in their claims, which Sia Tanga duly did.

However, all this money was given to two other individuals, according to the records.  Si Tanga’s claim to the land was not even considered and he was not informed that the money had been given elsewhere until his lawyers investigated the matter long after the District Officer had disbursed RM73,967.50 to one Janny Apan, plus RM89,651.40 and a further RM310,006.45 to a certain Salli Agong.

Who are these people who received such unusually handsome rewards from the state government in return for the confiscation of Encik Sia Tangi’s land? 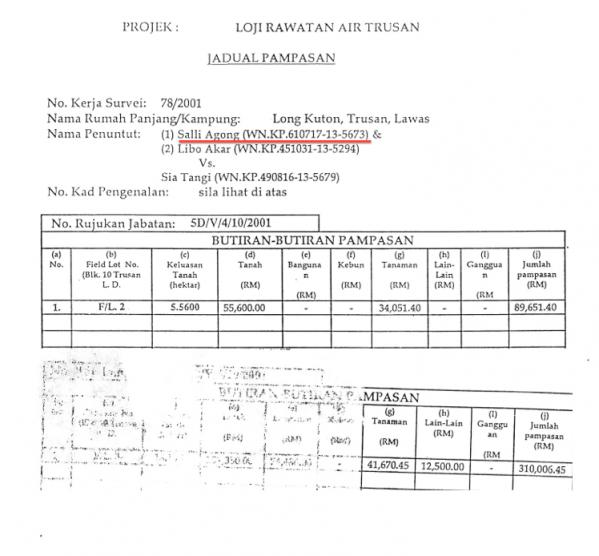 The court has quashed these compensation payments to the mysterious Salli Agong, however the money has never been recovered by Sia Tanga

Could the Lawas Member of Parliament Datuk Sum Agong please step forward? Perhaps he would care to deny  the rampant rumours that his family members have been involved in this generous deal?

Would Agong’s close BN ally from the same constituency area, Awang Tengah, also like to vouch that there is no connection between Salli Agong and Datuk Agong as is widely being said?  After all, if the Minister is getting the fat feast it does seem logical that his local side-kick might be expecting some crumbs from the table!