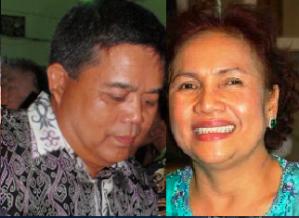 NCR landowners in Sampadi have learnt the hard way how nothing can be trusted in the hands of BN, with party top dogs now fighting with each other to get hold of their lands.

In July a group of 12 villagers from Kampung Gerunggang had decided to sell some of their NCR (Native Customary Rights) land to a keen buyer.

That purchaser, no surprise to learn, was none other than a BN politician.  Aaron Dagang is the PRS MP for Kanowit, who will be standing again for office in the up-coming federal elections.

Dagang seems to think that his salary for serving his constituents is not enough for his needs and had set about parting this poor community from their birthright lands for what is doubtless a good price that will give him a good profit.

The agreement shows he planned to buy the 77 acres, not far from Kuching, for RM231,000, which is then to be converted to yet more oil palm.

Given that Chief Minister Taib Mahmud’s brother Onn Mahmud has been touting his own oil palm plantation at RM31,000 per acre, this land should eventually be worth ten times the price that the villagers have agreed to sell it for.

So, Dagang must have been pleased at the way he was ‘looking after the interests’ of the trusting people, who had voted for BN and were then selling him their heritage for what to a poor person might seem a life-saving amount. 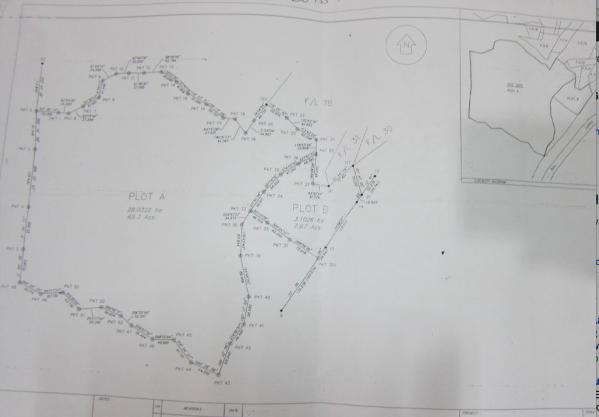 ‘Lot 155′ – expensive mapping that was to prove a waste of money!

Raziah had got there first!

However, as the parties set out to finalise their transaction concerning the purchase of Lot 155 Block 8 Samapadi Land District, they made a discovery that was shocking to both sides. 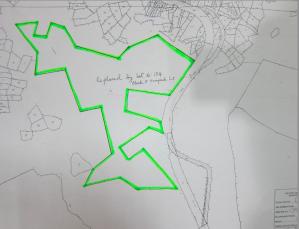 ‘Replaced’ by Lot 154 – the Lot 155 which used to belong to the villagers has been absorbed without notification or of course payment!

It seemed that Lot 155 had suddenly disappeared from the records!

After much research and many weeks it emerged that the lot had somehow become “replaced”.  According to a note in the Land Registry, this meant it was now part of the neighbouring Lot 154.

And it turned out that this very much larger Lot 154 had already been granted by the Land & Survey Department to another company in 2010.

This meant that the villagers are no longer the officially registered owners of their NCR land. Yet they had never been told a thing about it and had even been encouraged to go ahead spending money on useless plans!

So, who was the influential person that was able to achieve such an alteration to the Land Registry without even a notification being made to the rightful owners?

“Replaced” – the scribbled alteration in the Land Registry that removed these people’s land and gave it to Raziah Mahmud!

A search of the Land & Survey Department shows that in 2010 Lot 154 (now including the old Lot 155) was granted by the Department in the guise of ‘state owned land’ to the company Saradu Plantation, which grows bananas. 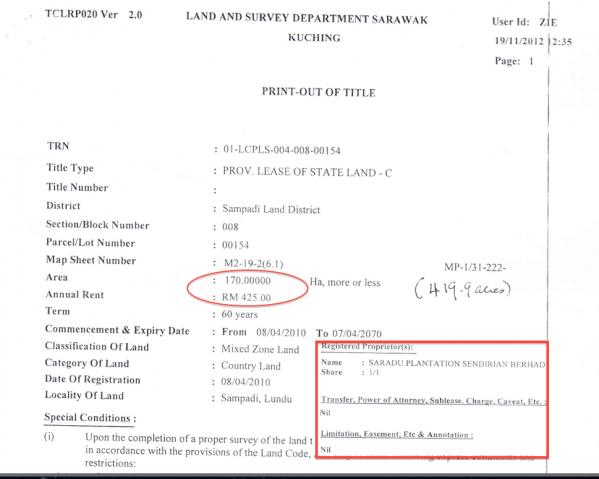 This company used to be named Emerald Discovery as can be seen in the official records and it largely belongs to Taib’s sister Raziah Mahmud! 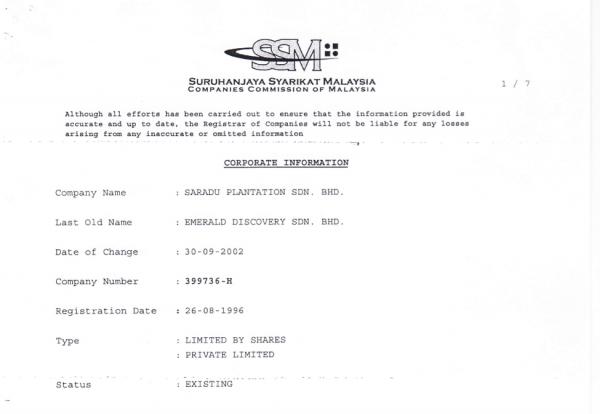 Saradu Plantation has in fact benefited from a good number of sales from the Land & Survey Department, according to our leaked copy of the secret registry, which has enabled us to at last reveal exactly who has been the beneficiary of handouts by Taib’s Planning and Resources Ministry over the past 30 years.

In case there is any doubt as to who controls Saradu, let us take a look at the entry from our leaked document.

Taib’s sister Raziah is the person listed as the contact for the company.  As in the case of Lot 154 Block 8 Sampadi District (below) there is no evidence in the registry that she paid anything at all for the privilege of taking the land.

ZERO PAYMENT! – the 170 hectares of ‘State Land’ in Lot 154 includes the 77 acres belonging to the villagers!

The Land records (above) strangely do not mention who was the recipient of Lot 154 Block 8 Sampadi, however our separate Land & Survey Department documents prove that the banana plantation refers to Saradu Plantation Sdn Bhd. 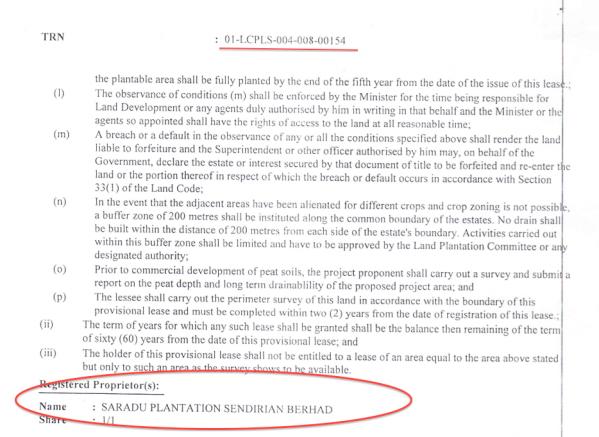 Put simply, our investigations show that this NGO land has been taken for free and given by the Land & Survey Department to Taib’s own sister Raziah Mahmud!

Official records confirm that Saradu Plantation is very clearly a Raziah family company.  In fact the first Director listed is none other than her youthful daughter Eliah, who is well-known for her party-loving behaviour and her acquisition of other large tracts of land from the State of Sarawak (and NCR landowners), thanks to her mother’s interventions at the Land & Survey Department.

Raziah’s daughter Eliah is a Director – the biggest shareholder of the company is Organic Treasure Sdn Bhd, which is largely owned by Raziah Mahmud and her husband Robert Geneid.

Raziah Mahmud is obviously concerned that her daughter should become ever more pampered and rich by taking NCR lands, even 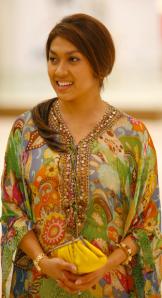 Eliah Abbas/ Geneid – has acquired a clutch of lands and directorships in her name, thanks to the influence of her mother, who is Taib’s sister. The fact that these lands actually belong to natives of Sarawak seems not to trouble the family.

though this has deprived the people of Kampung Gerunggang of the small opportunity to make some little profit out of the sale of their plots.

The main shareholder of Saradu plantation, furthermore, is a company called Organic Treasure.  Organic Treasure is largely owned by Raziah herself and her husband Robert Geneid.

Various other BN cronies also have stakes in Saradu Plantation.

With an election coming in just a few weeks, surely these Sampadi villagers, who previously voted for BN, must be starting to wonder if it was wise to put their administration in the hands of such a greedy family as the Mahmuds?

After all Taib has destroyed all the normal checks on his power, purely so he can give out lands as likes.  Why else would he take on not only his own job of Chief Minister, but also that of Finance Minister and of Planning and Resources Minister, the position that controls state lands?

For an old man to hold on to all the three big jobs in government makes little sense under normal circumstances.

However, as our many researches have shown, for the last 30 years Taib has used this unnatural power to enable him to grab more than half of Sarawak for his own family, his political supporters and business partners.

The people of Gerunggang are his latest victims amongst many others in Sarawak. 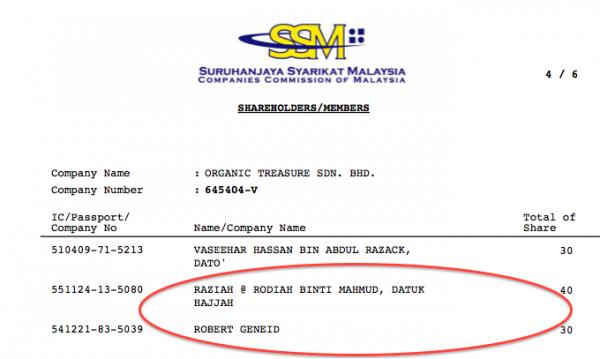 Questions are now arising as to how Raziah achieved this latest land grab?

Some are asking whether Raziah’s close relationship with Taib’s Deputy Minister of Planning and Resources, the unaccountably wealthy Awang Tengah, could have provided the crucial contact who arranged her land grab in this case?

Tengah’s own record of grabbing lands from local peoples has already been examined by Sarawak Report.

We ask at what stage are local people going to realise that the only way they can protect themselves from these notorious land grabbers is to vote them out of office and appoint a government ruled by law?

Powerful ally for Lot 155, but what about the other NCR landowners of Gerunggang? 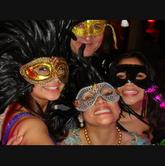 Life is such a party for the fabulously rich Geneids, who have stolen an area larger than Singapore from the state of Sarawak

At least in this particular land grab case the poor village victims may for once have a powerful ally from within the government itself!

MP Aaron Dagang is said to be outraged and furious that he has been done out of his land deal by a willy Raziah, who managed to get hold of the land not just for cheap but for free by using her influence at the Land & Survey Department!

Dagang is apparently now making representations and fighting for the Lot 155 to be removed back out of the Saradu concession, which may mean that eventually the NCR land owners are in a position to sell it over to him.

However, while the BN bully boys fight it out, this case has opened up concerns for all the other NCR landowners in the Gerunggang area.

We understand that much of the rest of the 170 hectares of comprising Lot 154 Block 8 Sampadi is also being farmed by their NCR owners, who until now were oblivious that Raziah and her husband and daughter, together with their business partners, now ‘own the concession’ and are planning to raze their rubber trees and orchards so that they can cover the area with bananas. 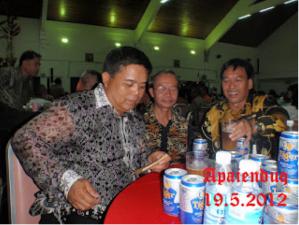 Is it time to finally call time? BN’s record of greed and excess is out of control.

The people of Sampadi stand warned and so do the people back in Kanowit, where Aaron Dagang (left) was returned to Parliament in 2008 without even having to fight any opposition candidates.

If the people do not take action this time around it is plain that their land will all be taken.

Both these areas do now have strong opposition candidates who are arguing that it is time for change, before all the last remaining trees and lands are taken and destroyed for the benefit of the jet-setting Mahmud family and their friends, who now spend most of their lives in other countries.

Of course, Taib cheats in elections, but a determined people must now resist this cheating and take their chance to end these land-grabs and restore their country. 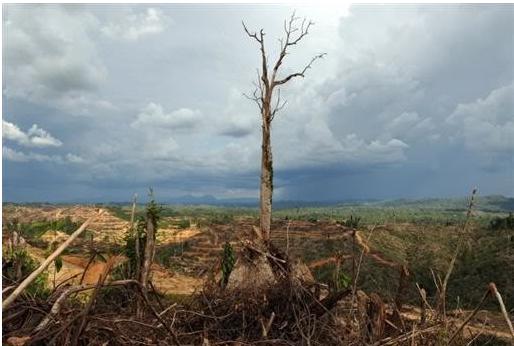 Time to save Sarawak from Taib’s land-grabbing “development policies”?