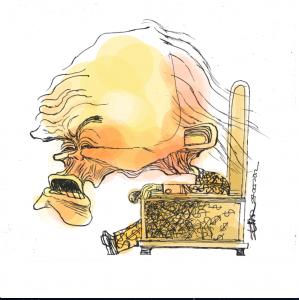 The growing international understanding of Taib’s style of corrupted and kleptocratic (thieving) government is reflected in an opinion piece published this week by Australia’s Canberra Times.

The article criticises the “destruction of the Borneo Rainforests” and Taib’s “Great Leap Forward” plans for 12 mega-dams:

“There is method in the madness. As critics repeatedly point out, the suppliers for much of the dam-building works – including the concrete – are companies associated with the chief minister’s family.”[Paul Malone, Canberra Times – an Asian Vision Blinded by Greed]

The publication of such comments in the mainstream Australian Press (and there is much more, see the full article below) is a sign of the growing recognition worldwide of Taib Mahmud’s disgraceful destruction of Sarawak’s unique environment and his plundering of his people.

Last week the key consultants for his dam building “madness”, Hydro Tasmania, signalled it was pulling out of the project in the face of growing protests.  This pressure is set to increase and organisations with reputations to consider, such as the International Hydropower Association which is scheduled to hold its 2013 Conference in Kuching, should take note of this article below.

The White paper on Australia in the Asian Century tells us that we will replace the tyranny of distance with ”prospects of proximity”. But the real objective is clear – it’s profit from proximity, or in other words, what’s in it for us.

The paper is a relentless catalogue of things Australians can do to get material benefits from the changes happening in Asia. These are seen almost exclusively in economic terms and almost always as beneficial.

You need to search long and hard to find any mention of the destruction of the Borneo rainforests; the burning, logging and the damming of rivers; sweatshops, child labour or corruption.

Lest I was reading an extract, or was too woolly-headed to find the references, I asked the department responsible – Prime Minister and Cabinet – to help me. My enquiry was passed on to the office of minister Craig Emerson. Where could I find the discussion on:

1. The broad issue of governance in Asian countries?

2. Transparency in both government and court proceedings?

5. A chapter on human rights, which might include indigenous land rights?

I should have also asked about tax avoidance, transfer pricing and emerging inequalities.

But in truth I know the paper’s writers aren’t really concerned about such matters. The poor aren’t going to buy our goods. And what the writers and the government really want is mega-rich gamblers in our casinos.

Who cares about how they got their wealth, as long as we can steal it off them?

It should be said here that I see economic growth and development as a good thing. People should not live in poverty, or in squalid conditions. Singapore today is a much better place for its citizens than it was in the 1970s.

But developing countries need to pay attention to the type of growth and how it is achieved. Dispossessing many citizens to enrich a few is not the way to go.

Take, for example, the Sarawak government’s grand plan to build an industrial state, powered largely by hydroelectricity. In what looks like an attempt to repeat the Soviet Union’s development in the 1930s, or China’s Great Leap Forward, the state government envisages a five-fold expansion in GDP by 2030, with 1.6 million more jobs and the population almost doubling to 4.6 million.

Twelve dams will do the job. One, Bakun, is already in operation and a second, Murum, is nearing completion. But at present the government doesn’t have a market for all the power generated from Bakun.

Nevertheless, with the assistance of Australians, it is pressing ahead with the next cab off the rank, the Baram Dam, which will displace an estimated 20,000 native people. There is method in the madness. As critics repeatedly point out, the suppliers for much of the dam-building works – including the concrete – are companies associated with the chief minister’s family. They in turn are able to invest in Australia.

Today the Australian government and opposition have little to say about inequality at home, so we should not be surprised if they turn a blind eye to it abroad. But whether authorities in China, India, Malaysia, Indonesia or elsewhere like it or not, inequality will have to be dealt with. So will corruption.

Combined, they raise serious questions for Australia. Are we happy to take investment from corrupt Asian business people?

Australian are not lily white in government-business operations, as the investigations into the NSW Labor government’s coal exploration licensing processes, and the Securency bribery allegations well illustrate. Could we contribute to the development of better governance processes by convening a forum to discuss ways and means to deal with the problem?

Our regional neighbours could well be interested in how we handle it.

We could promote the benefits of transparency in investigating allegations and draw attention to the role of a free media and the need to facilitate and protect whistleblowers.

The real focus of the white paper has not escaped those to our north. A writer in the Jakarta Post commented that the paper reeked of Austro-centrism and most of its points were written with the expectation that Australia would win from closer ties with Asia, without necessarily giving much back in exchange.

By way of example, the writer raised Australia’s closer ties with Asian universities in order to attract students and skilled workers.

”Rather one-way to say the least,” he said.

And he was spot on. We benefit when we take the best of the best – young Asian doctors, engineers and scientists. And the developing countries that need such people lose out. But there’s no discussion of the morality of that.

The paper claims that many Australians hold misperceptions about some Asian nations. It says a poll last year found that many believed that Indonesia was essentially controlled by the military, despite the country’s democratic system of government.

It is true that Indonesia has made great strides and has elections. But the ordinary Australian’s perception is not unfounded. Behind the scenes, the military exerts enormous power and, in regions, such as West Papua, peaceful protests are supressed by military action.

The government plans to boost our attractiveness as a regional headquarters for fund managers who will ”manage the growing wealth in the region”. This is to be done ”without risking system integrity”, whatever that means.

I hope it does not involve the deregulation that enables crooks to operate and in the past has delivered financial crises.