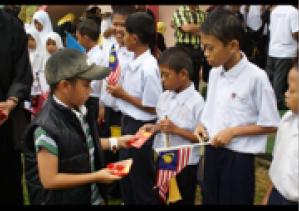 MP Norah Abdul Rahman’s nephew being trained to think he is a King of the poor – Norlia’s son hands out Ang Pow to the poor kids in Tanjung Manis.

The people of Sarawak are still digesting the arrogance of the Abdul Rahman sisters, revealed in the Global Witness expose on the land grabs this week.

Two of the eight sisters, who own companies given NCR land by their cousin the Chief Minister, explained in a secretly recorded interview how they consider their relationship with the “very, very poor” people of Sarawak.

“You know they are very very poor and when leaders come they look at leaders like their kings and they always expect some handouts”,

said the extremely well-fed Fatimah Abdul Rahman who is the contact for Ample Agro Sdn Bhd, a company given 5,000 hectares of land in Julau.

As if this was not patronising enough, consider the comments of the eldest sister Norlia, who was introduced as the person “who looks after the [Tanjung Manis] constituency” for yet another sister, the MP Nora Abul Rahman. 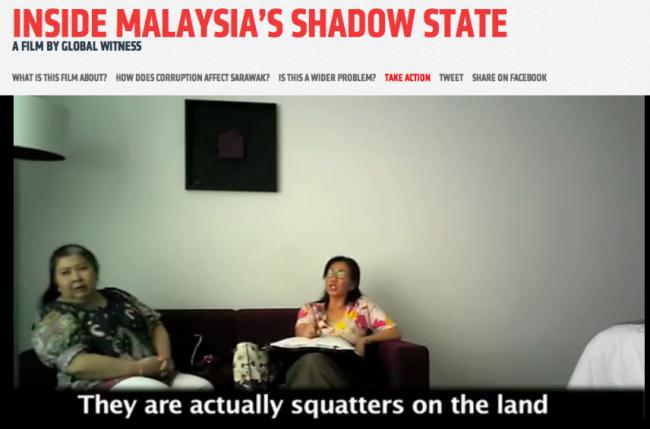 “They are actually squatters on the land because the land doesn’t belong to them it’s the government land, so they’re squatting”

said Norlia, who seems to think it is quite right that traditional people should be forced off their traditional land, while she and her wealthy sisters have some kind of entitlement to it instead.

Because they are ‘Kings’?  Even the real White Rajahs of Sarawak’s past took care not to turf the local people from their homelands. 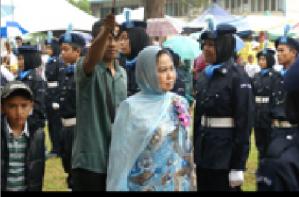 See how the guards stand to attention and umbrellas are held over our heads, little ‘King’?

The shocking remarks have prompted insiders to send us pictures of the Rahman sisters acting out their sense of ‘kingship” in Tanjung Manis, one of the last mangrove regions in Sarawak, which another of their companies has been stripping bare in their drive to turn it into a “Halal Hub”.

Now everyone has learnt their place?

The sisters’ sense of entitlement seems to come from the fact they think their family is something special, Royal even.  But they are not.  Their father was a lawyer who managed to become an elected politician and who promoted their cousin Taib another lawyer to get elected too.  They have no entitlement to anything. 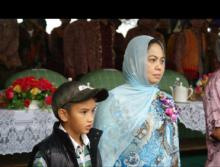 Remember we are a Royal Family here in Tanjung Manis?

As for the land, which their cousin, Chief Minister Taib Mahmud “handed” to them using his position of trust as leader of the State Government. Such favours are of course blatant corruption, public theft and abuse of public office.

However, it is clear the sisters think that they are entitled merely because of their luck in being related to rapacious Taib, whereas the people protesting about the loss of the lands they live from are “naughty”.

“You know they are pretty naughty people.  They try to make money, the moment they hear (they have people in the Land and Survey Department who tell them look this land has been given, has been titled to this company to do oil palm or what not) they plant themselves there” [Fatimah Abdul Rahman]

The sisters are clearly angry that appalled workers in Land and Survey are warning Dayaks that their traditional lands have been assigned to relatives of Taib like them, because they have their rights under the law.

In a clear breach of duty the Abdul Rahman sisters would prefer to keep the transactions secret, so they can sell at a profit before the local people even know their land has been taken.

They are very very poor you know

Fatimah openly admits her Chief Minister cousin is corrupt in the film. And she justifies it merely by assuming that everyone else in a position of leadership in the world is corrupt as well.

“I know people are talking about him being corrupted and all, but who isn’t in this world when they are leaders? (laughs)” 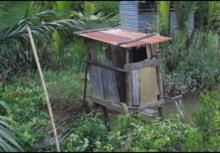 This is presumably a reference to all the BN politicians she knows in Malaysia.  With that lot as her reference point Fatimah clearly knows no better.

But, in fact most other countries punish such personal corruption by ministers with severe measures.  Generally, only backward dictatorships have leaders who get away with the same open corruption as BN.

But Fatimah even goes on to justify Taib’s corruption in the light of the “good” he has done for the state:

“I’m not making any excuses you know, but if you look at the good he [Taib] has done for the state it outweighs all the things that people have said about him”.  [Inside Malaysia’s Shadow State]

It is these remarks that have prompted readers to send in some sample pictures of the acknowledged poverty of the people of Tanjung Manis, where sister Norah is MP.

He has done so much for the State? – a home in Tanjung Manis.

This is the region that the family are stripping bare with their companies.  Grabbing the precious mangrove woods and setting up factories and ports which are benefitting from huge sums of money injected from public funds by the Chief Minister.

The familiar pattern where the state pays to set up the enterprises and then the family of Taib Mahmud are there as the owners of these enterprises to rake off the profits is being played out once more to the benefit of the Abdul Rahman family over in Tanjung Manis.

This is why Taib can count on the extreme loyalty of his MP there, his cousin Norah Abdul Rahman.

It is also why it is nonsense for the Chief Minister to try to get off the hook by saying that the sisters were acting to “frame” him in the film. 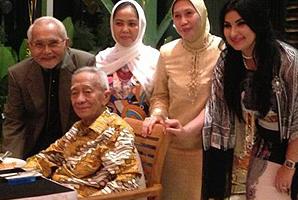 Out to “frame” Taib? The Chief Minister seen only recently with his uncle and cousins. Why would a happy family getting rich together kill the golden goose?

The Abdul Rahman sisters would never want to damage Taib when they are doing so well out of their family’s rampage of plunder in Sarawak.

The two sides of the family have been working together very closely indeed, with Norah travelling the world with Taib to get investment for their money-making ventures in Tanjung Manis.

Neither would any of the rest of the Taib family who we have shown have also made themselves fabulously rich from taking Sarawak’s lands, as detailed in scores of our articles here on Sarawak Report.

These include his sister Raziah Mahmud; the whole family of Geneids; Taib’s son Abu Bekir; his brothers; all nine of them have benefitted from vast lands handed to them as have Taib’s cousin Hamed Sepawi and all the key cronies and politicians who support him staying in power.

All these people have made themselves rich by plundering the lands of the people of Sarawak and they seem to now think they are entitled like kings.

Perhaps it is time to remind them they are not, vote them out and get all that money back? 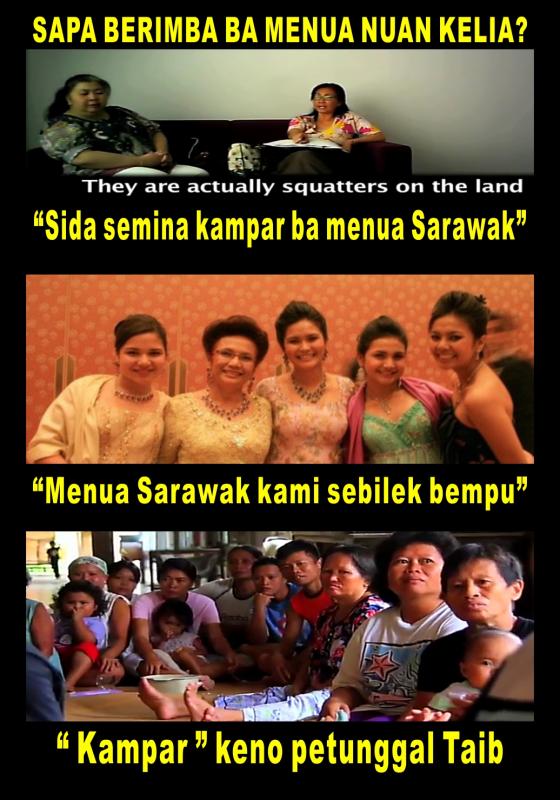 The word is getting out as the blogsphere starts to respond