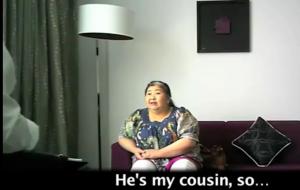 For three years Sarawak Report has been detailing week in and week out the outrageous theft and destruction carried out by Taib Mahmud and his family against Sarawak and its people.

We have been called liars and all our evidence (mostly obtained from public records) has been denied.

Lawyers have been hired to accuse us; PR people hired to defame us; technicians hired to bring down our website and jam our radio station and nasty threats have appeared in our mailbox.

But, now the world can see that everything we have said about Taib’s land grabs, his corrupt backhanders and gross tax evasion as he steals and siphons billions of the people’s money out of Sarawak is completely true.

This is because his own lawyer, Alvin Chong and his family members have detailed it all on camera (Chong has represented the Land & Survey Dept and a number of concerns linked to Taib) – they simply did not realise they were being secretly recorded at the time!

Also caught out was one of Taib’s key cronies, the Hii family, who are the owners of the Kingwood Hotel chain and have received endless concessions and perks.  If you wonder why they are so favoured, listen to them detailing how they do business with the Chief Minister.  Taib hands them the licences and they pay 10% up front for the favour. 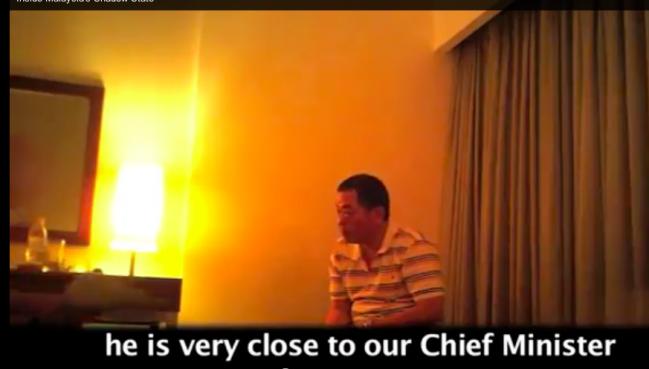 The film containing these disgusting confessions, during which both the lawyer and Taib’s nieces sneered and insulted the poor people of Sarawak who they were cheating, can be seen on Al Jazeera news and the full film secretly recorded by the NGO, Global Witness, by clicking here.

Caught Out! – “This has been done many times before”

There can have been few more devastating secret filming exposes than the confessions made by Taib’s closest family, a close lawyer and his cronies as they set about trying to sell the land handed to them by the Chief Minister in his capacity as the man who controls the Land and Survey Department and indeed the whole of Sarawak.

The territory they are selling off is described at ‘state land’, but in fact as Global Witness has established both the Hiis and the daughters of Tun Ya’kub have got hold of titles to Native Customary Rights (NCR) Lands, where indigenous people were granted rights many years ago and now face being driven from their homes.

They all make clear that it is Taib who makes all the decisions to give out the NCR lands.  They also make clear that he gave it to them because they are close cronies and that in return the greedy dictator expects a large slice of the profits.

Not only that, the entire gang of thieves conspire together to cheat the country of tax in the process.  These are the tax rules made by the very government that Taib is part of and which he enforces against everyone else! 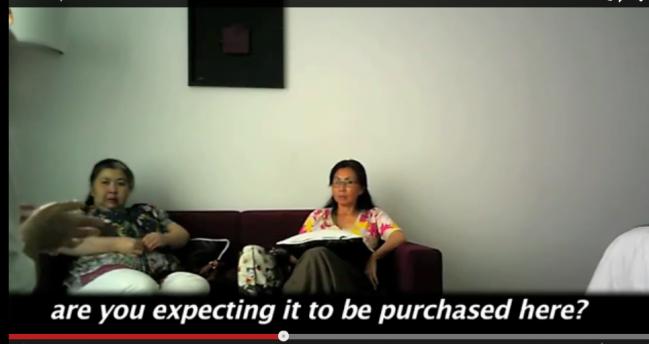 Taib’s cousins make clear they want the foreign buyer to pay for the land outside the state in Singapore, with just a small nominal payment inside Sarawak to avoid tax. It’s been done before many times they explain.

First in the frame are Taib’s cousins, the daughters of the previous Chief Minister, Rahman Ya’kub, one of whom is the MP for Tanjung Manis Nora Tun Rahman.

The women thought they were meeting with a foreign UK buyer, who wanted to acquire land for rich Arab investors interested in growing oil palm on Native Customary Lands in Sarawak.  But, in fact, they were being secretly filmed as part of an expose on Sarawak’s corruption by the environmental investigations NGO, Global Witness.

It was Sarawak State Government officials who had put the Global Witness ‘buyers’ in touch with Taib’s closest cronies, who had all been given lands they were clearly hoping to sell for a fat profit.

The 6 daughters of Tun Yakub had been handed a large chunk of land in Julau, which they own through the company Ample Agro Sdn Bhd, as we had already reported in a previous article on ‘Ladies with Titles‘, which demonstrates how so many of Taib’s female relatives and wives of his cronies have received huge lands from his departments.

The listed Director of this company is one of the sisters, Fatimah Abdul Rahman, who uses the office at the state supported enterprise, the so-called Tanjung Manis Development Hub, which her MP sister Norah has been made Chief Executive of.

It turns out that the land is contested because it belongs to Native Customary Land Owners, but more of that later.

Fatimah unwisely spilled all the beans in her discussions with the investigator from Global Witness. Most notable was her asking price, which the investigators calculate would give her a profit of USD$16million when she had paid an original premium of just USD$300,000 (not required to be paid in advance). 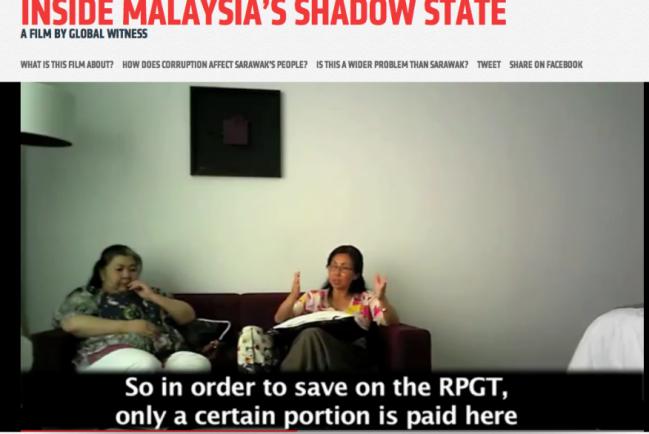 Later these women and the others who were caught out tried to deny their remarks, but that was because they hadn’t realised they had been filmed!

The whole process is described in even more thorough details by one of Taib’s key lawyers who comes to negotiate the deal, Alvin Chong.  He explains that only the “nominal value” of the land gets sold in Sarawak, to avoid the Chief Minister’s own taxes.  The “Substantial value” must be paid secretly in Singapore! 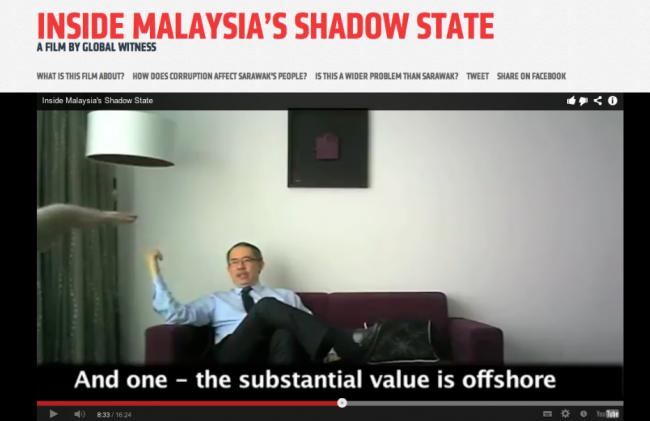 Alvin Chong is the lawyer for many of Taib’s enterprises

It is worth noting that this family lawyer, who shows himself so willing to get involved in corrupt activities that ought to land the perpetrators in prison, is one of the most prominent lawyers in the state, linked to numerous activities by Taib Mahmud and his nominee cousin Hamid Sepawi.

Chong works for Naim Cendara, Sarawak Plantations, Dayang Enterprise Holdings. Significantly he also represents the Director of Sarawak Land & Surveys.  He even managed the stock market launch for Sarawak Cable, which Taib has handed largely to his son, Abu Bekir.

“Greedy Squatters” and “blind” people who have no chance of legal advice. Taib’s cronies laugh at the “very poor” people they are robbing.

Undoubtedly, the worst part of the expose is the way that Fatimah’s horrible confessions show how she and the whole of Taib’s family regime are filled with disdain for the ‘blind’, ‘poor’ and ‘naughty’ people who are resisting them taking their land.

The land that the Abdul Rahman sisters are selling and the land that the Hii family are also selling in the film are native customary lands, confiscated under Taib’s new policies which have brushed aside the rights and protections of Sarawak’s rural and forest communities.

But chubby Fatimah has the cheek to describe the poor people of Julau from whom she has taken the land as “greedy squatters”.  She says in the film that they are being “naughty” for protesting that she and her sisters are snatching at their customary lands.

“You know they are pretty naughty people, they try to make money, so the minute they hear..from the Land and Survey Department..this land has been given to this company to do oil plan and what not, they will plant themselves there.

Fatimah admits the people are poor, but she doesn’t admit that time again it has been they and not Taib’s state government that have won in court over the rights to the land that the Chief Minister has been handing out in this way.

Technically they cannot claim at all, but they could make life difficult if you don’t accommodate them. They may harass you that’s all. They are actually squatters on the land because the land doesn’t belong to them it is government land, so they are squatting.  Now you have been out in the exterior and all you know they are very very poor. When their leaders come they think of them like Kings and they always expect some hand outs things like that. 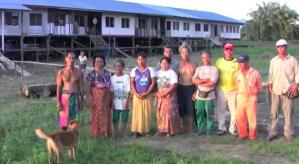 “They are very poor” – confesses an unrepentant Fatimah

Fatimah obviously does not see the irony of her own attempts to make a multi-million dollar profit from the lands where these people are asking for compensation.

Neither does it cross her mind that by these words she has destroyed Taib’s claims that he has enriched and developed his people through his logging and oil palm plantations.

Global Witness is a respected environment agency worldwide and their film confirms Sarawak Report’s statements that less than 5% of Sarawak’s original jungles remain, despite Taib’s declarations that we were telling blatant lies that over 75% remains untouched.

It is the Chief Minister who has lied and robbed his own people, since Global Witness also confirms our findings that some 200,000 square kilometres at least has been taken into the hands of Taib’s own family members, including sister Raziah, son Abu Bekir and niece Elia Abas.

Man of the law explains how to break the law

Just as devastating are the confessions of the land grabber lawyer, Alvin Chong, who also expresses disdain and mockery for the poor native land owners who he has cheated in Sarawak.

Chong explains on tape how to illegally get round the restrictions on foreign ownership.  Just put the land in the hands of a nominee he explains, but hide the whole arrangement in Singapore, because Malaysian law demands that the real ownership should be declared. 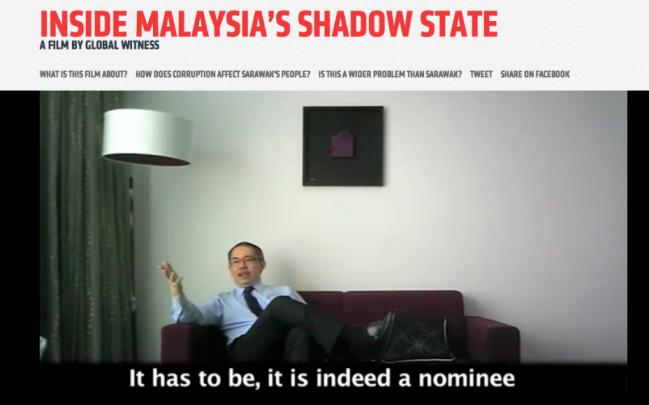 Worse Chong makes clear he wants to find the most ignorant and distant person possible. He says his “trade secret” is to locate a poor country person, who will not be able to benefit from any advice and who nobody will ever be able to find and to give that person RM10,000 to put his name to the ownership of the company. 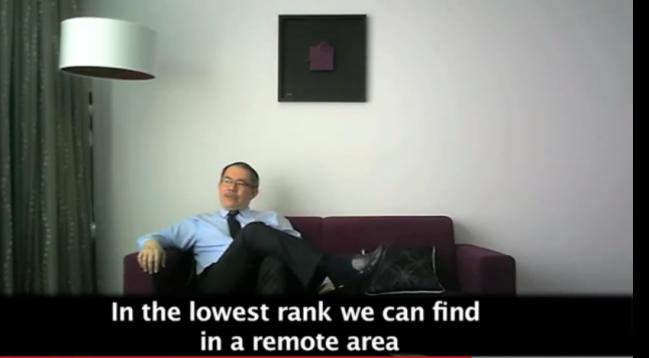 Chong’s trade secret is to find a person who is not in a position to be “distracted by clever advisors”, who could tell  them their rights and certainly not to give them a “shred of paper”.  He tells the investigator that he looks for a country person down in Kuching for a few days.

“They wouldn’t know how to find a lawyer would they?” (laughs) [Taib lawyer, Alvin Chong

“It’s cheap, it’s really cheap.  Can you imagine a villager comes to town and you say I am going to give you 10,000 bucks. My God, he is going to go back to the village you know he will be the one eyed man who is king of the blind” 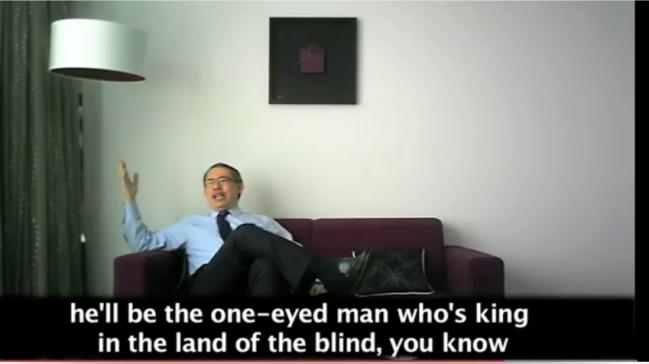 Taib’s lawyer mocks the rural people of Sarawak for their “blindness” to the robbery of their lands. Pleased with RM10,000 when Taib’s cousins are making around RM50,000,000 from their native land deal.

It happens all the time

This devastating film by Global Witness forms just part of the evidence the NGO has gathered on Sarawak’s corruption, largely thanks to the open indiscretion of key players in the regime.  Corruption is so blatant and widespread that such people no longer feel fearful or ashamed of breaking the law.

After all the worst law breaker is the man in charge.

It is a point that Fatimah herself admits when talking about Taib:

“I know people are talking about him being corrupted and all, but who isn’t in this world when they are leaders?” (laughs)

This is a film that will have Malaysia talking.  But, Malaysia will see that BN and Najib Razak will do nothing to move against this corrupted state leader, because they think that Taib can deliver them a ‘fixed deposit” of votes in the coming General Election.

Is it time to prove them wrong?