Princess Jamilah In Business Exporting Hardwood From Sarawak To The USA! 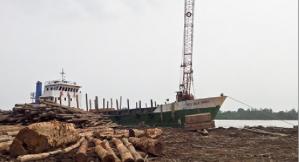 Taib Mahmud has vehemently denied that his Canadian daughter Jamilah and his other family members do business in Sarawak.

However, we can show that for decades they have been exporting hardwood straight from the jungles of Sarawak to the USA!

Also involved in the family export ring are Taib’s brothers Onn and Tufail, his late wife Leijla and his son Sulaiman.

This particular business is conducted through a web of companies linked to Bormill Wood (Trengganu) Sdn Bhd, which first started business in the late 70s when Taib’s uncle was Chief Minister. 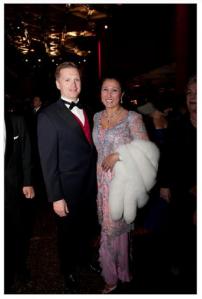 No wealth from Sarawak?

Jamilah is a director and shareholder of Bormill Wood, one of 83 companies that we have identified, in which she holds interests in Malaysia.

The other shareholders are the Taib crony family, the Hiis, who have been exposed as being willing to offer the Chief Minister kickbacks.

Jamilah has been a director of the company since May 1980, at which time she was still the tender age of 19 and a student in Canada.

Taib has been asking people to believe that Jamilah made all her money herself, through her efforts and those of her enterprising husband, Sean Murray.

However, he was forced to admit he “gave some money” into starting her property business in Ottawa, while she was still a student.

Now Taib is going to have to explain how Jamilah also was involved as a girl in a timber processing company back in Malaysia – did he put some money in there too when she was just a teenager? 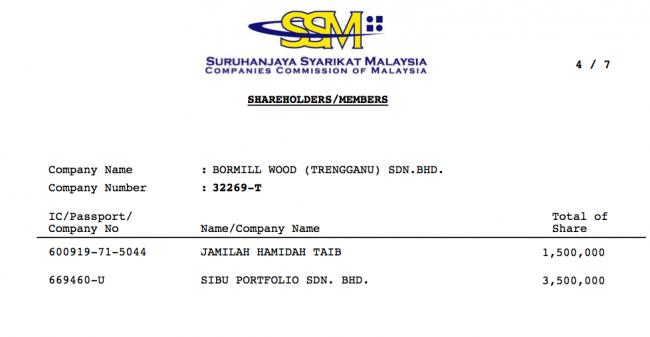 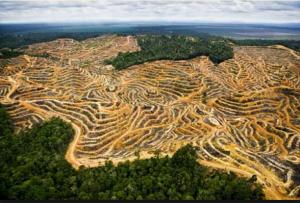 It appears that the Bormill group of Taib family companies also runs a shipping line, that specialises in transporting wood all over the world.

Among the Directors of Bormill Line Sdn Bhd is Taib’s brother Tufail and key shareholders in the company are another brother Onn and Taib’s son Sulaiman.

This company was set up in 1983, the same year that the Sakto group of companies was established by Onn in Canada with Taib’s student children Jamilah and Abu Bekir Mahmud.

During this period, shortly after Taib became Chief Minister, Onn Mahmud was regarded as Taib’s key business proxy. Onn was also behind Achipelago (again set up in 1983) to which Taib granted the monopoly over shipping export permits in Sarawak. 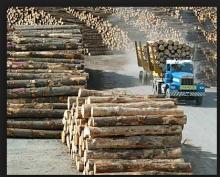 That monopoly is calculated as having earned the family two billion US dollars in kickbacks every year.

Other shareholders in Bormill Line Sdn Bhd are well known timber shipping cronies of Taib including members of the Lau family and the Tings linked to the company Sanyan.

This company, Bormill Line Sdn Bhd is also registered in Singapore at an address in Shenton Way.

At the same address and with the same directors is a sister company Bormill Line (Singapore) Pte Ltd, of which the main shareholder is a mysterious company in the British Virgin Islands called Premier Resource Holdings.

However, the headquarters of the Bormill Sdn Bhd shipping line is in Kuching, Padungan Road.  At the same address is another sister company called Universal Shipping of which the Directors and shareholders include the same two Taib brothers, On Mahmud and Tufail Mahmud. 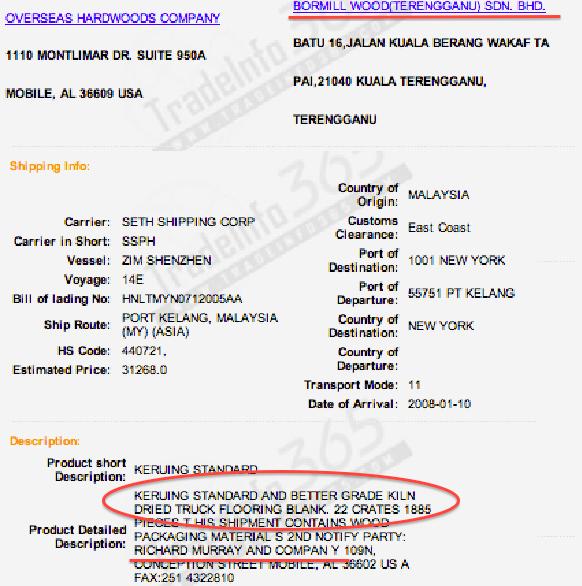 Another indirect shareholder of Universal Shipping is none other than Taib’s own late wife, Laila Taib.  The asset seems to be part of a vast empire of business interests that are now being managed by what is termed the ‘Estate of the Late  Lejla Taib’. 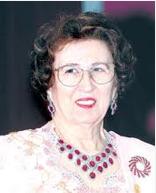 Taib’s wealthy late wife, Laila had shares (through Lau Kah Ding & Sons) in Universal Shipping. How did she get so rich?

This share portfolio includes a huge chunk of CMS shares.  We ask why doesn’t the Chief Minister come clean and tell who inherited from his wife?

Interestingly, a woman by the same name as Taib’s late mother is also registered as a shareholder, Hamidah Bt Hj Yakup. The IC number given appears to be foreign.

The Bormill Group appears to have originated in the 1970s under the Lau Family.  But, in the early 1980s slices started to be handed over to various Taib family members.

Bormill Agencies Sdn Bhd, for example, which was set up in 1981 (six months after Taib became Chief Minister) has brother Tufail again listed as a major shareholder.

The pattern fits into the most common complaint amongst businessmen in Sarawak, which is that if they are to be allowed to continue to thrive they have to hand over a large chunk of the shares in their companies, plus kickbacks, to the Chief Minister.

However, perhaps these businessmen created the problem for themselves by offering so many corrupted opportunities to their new Head of State the moment he took power?

Alpha Murni is a shareholder of Bormill Line, as is Whittaker Company Ltd in Hong Kong – one of the network of companies ‘owned’ by Onn Mahmud’s secretary Shea Kin Kwok. Another of these companies was the kickback company Regent Star, which was receiving payments for shipping permits from Japanese timber exporters.

Exports to the US

There are records showing a number of exports by Jamilah’s company Bormill Wood (Trengganu) Sdn Bhd from Malaysia’s Port Klang to companies in the USA. These shipments are described as being ‘better grade hardwood’, from Borneo’s native Dipterocarpus Keruing species, for such things as wooden flooring. 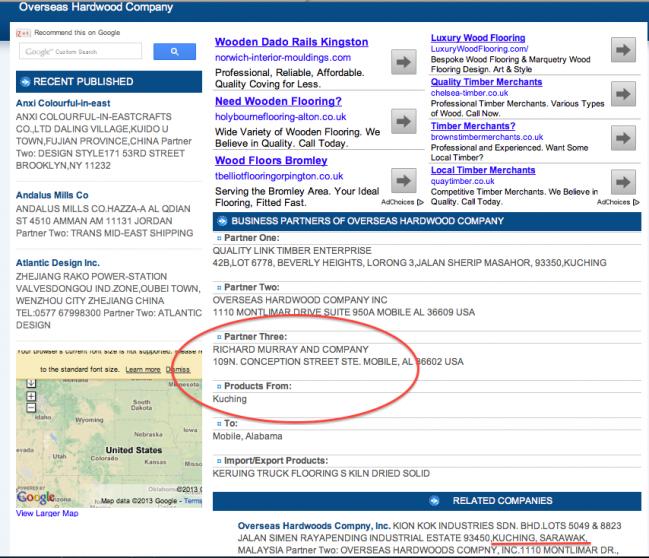 US imports of “products from Kuching”…..

Importers include Conwood Products Inc in Vancouver and Overseas Hardwoods Co in Alabama.  Overseas Hardwoods advertises that it sells “products from Kuching” and has a related company and also a partner in Kuching, Quality Link Timber Enterprise.

The contact at Overseas Hardwoods in Alabama is one Richard Murray.  Given that so many relatives of Taib’s son in law Sean (Hisham) Murray work in Jamilah’s businesses, he will surely excuse our enquiry as to whether this is yet another of his own family members working in the Taib business empire? 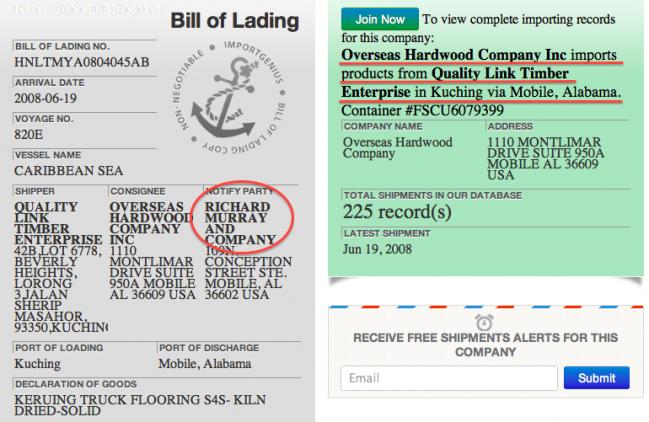 Could Jamilah come clean on just how much wood she has exported to the US and elsewhere from Sarawak?

Could Jamilah and Taib’s other family members please tell us how much of Sarawak’s forests they have exported through Bormill Wood and their many other companies?

As Chief Minister it is his duty to come clean on what he has taken from his country. 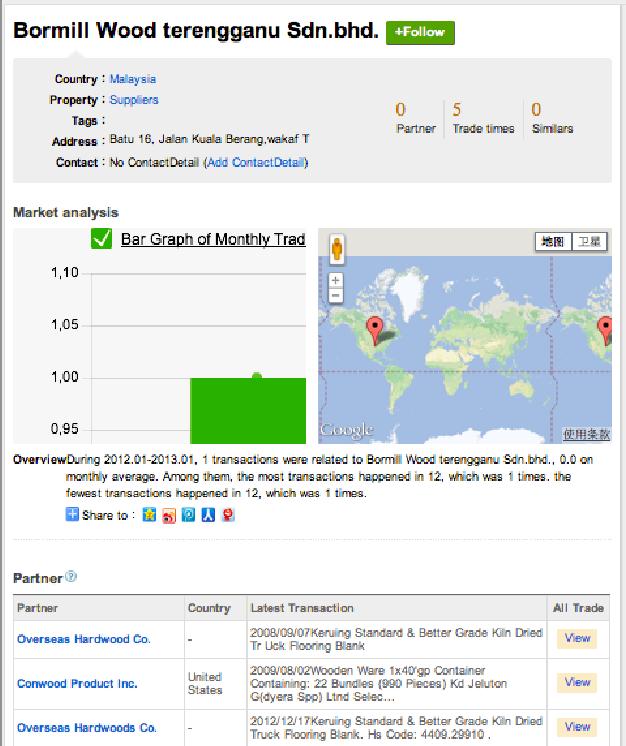