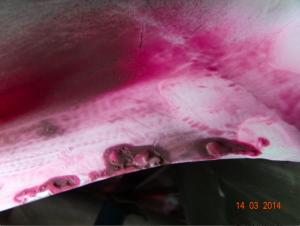 An extraordinary and potentially dangerous operation has been underway at the dam face of the Murum hydro-electric plant, according to secret documents obtained by Sarawak Report, in an attempt to repair sub-standard blades on the turbines, which have already been installed.

Leaked schedules show plans to assign construction engineers to work at great heights and in danger of gas leaks and explosions in confined spaces, as they try to covertly restore turbine blades, which have been “poorly welded” with “no grinding” carried out.

Consideration is even being given to the prospect of digging out the 4 massive hydro-electric turbines, which have already been installed in the walls of the newly-built dam – a move that would involve major demolition and the removal of huge amounts of the concrete into which the turbines have been embedded. 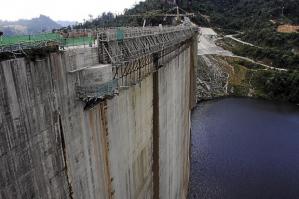 High tech repairs to be carried out to the turbine machines on site! 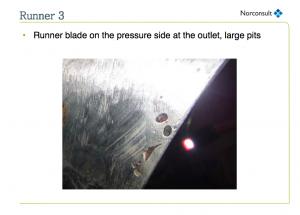 The implications in terms of costs and delays are shocking. However, so far there has been no mention by Sarawak Energy or the Sarawak State Government of any problems associated with the project.

To the contrary reports provided by SEB have led people to believe that progress on the dam is going well and on schedule, with electricity production to be expected as early as September.

Turbine blades “do not meet the contract specifications” 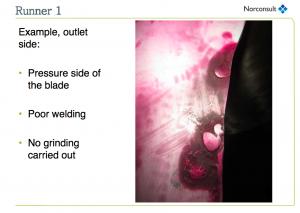 Poor welding and no grinding carried out. Metal blades are bubbly and pitted – Norconsult report March 2014

Among the documents in our possession is a full report, which reveals that the turbines supplied by the dam’s Chinese construction company, Three Gorges Development (Malaysia) Sdn Bhd, a subsidiary of the company which build China’s Three Gorges Dam, have been found to be “not suitable” and “do not meet the contract specifications”.

The report, was provided by the Norwegian company Norconsult, which carried out inspections towards the end of last year, and it was presented to Sarawak Energy (SEB) in March of this year, together with a proposed schedule for trying to bring the turbines up to standard, even though they are now already installed.

The key problem lies in the quality of the metalwork in the core of the turbines, according to a mass of detail and photographs made available to Sarawak Report. 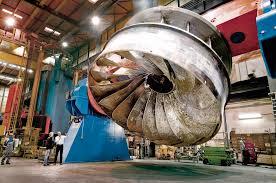 So-called ‘runners’ turn the turbines as their blades are pushed by the flowing water.

These blades need to be extremely robust and evenly calibrated, in order to last decades of heavy wear and tear without deteriorating, say experts – if the plant is to meet expected power outputs.

However, tests and inspections by Norconsult showed an substandard quality across all the runners.

Time and again the report refers to “poor welding” and “no grinding” on the blades.  It also refers to “cracks” and “pits”, which could soon become the focus of “metal fatigue”.

Numerous photographs using red dye have been supplied, which show the problems clearly, with flaws discovered in all the blades inspected in the 3 out of 4 Murum runners examined by Norconsult. The blade surfaces are also described as rough instead of smooth, giving further rise to a danger of cracks and breakages. The report explains:

“The defects are located in high stress areas on the runner outlet. Defects could likely be the starting point for fatigue cracks” [Norconsult Report March 2014]

One highly senior California based hydro-electric engineer, who is familiar with conditions in Sarawak, Professor Daniel Kammen from Berkley University, examined the evidence and told Sarawak Report that the pictures provided show that the quality of the blades was extremely poor:

“The bubbles and nicks on the blades mean each blade does not weigh the same, so as it spins over time the runner is going to wobble.  These are blades that look significantly out of balance with each other and the runners will not spin true. And that will cause a cascade of mechanical problems, with wobbles and stresses and the weakest bolts will take the most stress, which is exactly what you don’t want.  Over time they will eat through the bolts they sit on and sheer off if they are not exactly aligned and carefully calibrated.  This means that these blades and runners are not in operational condition.  These are catastrophic repairs that need doing – to an engineer ‘catastrophic’ means cannot and should not operate”, explains Professor Kammen. 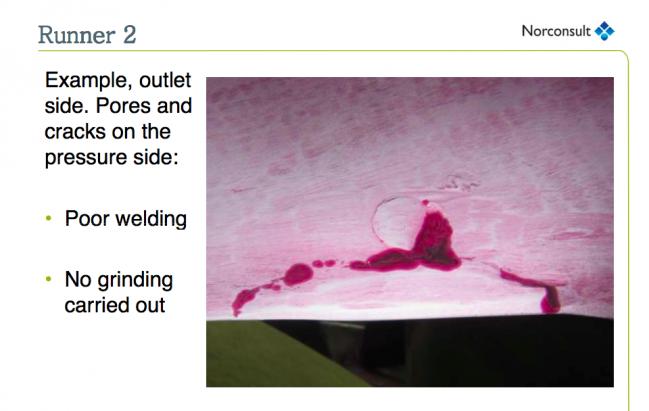 Professor Kammen’s analysis of the evidence is confirmed by comments made by Norconsult throughout the inspection document dated 20th March, which further refers to the rough surface of the blades and to cracks, which could cause lumps of metal to eventually sheer off.

Such lumps of metal can cause further damage to the machinery and the loss of bits from the blades will also impact further on the balance of the turbines.

In a devastating conclusion the official report summarises a situation where such metal fatigue could cause “catastrophic break downs” of the turbines:

“The runners do not meet the contract specifications: spot check shows that all three runners have cracks and pores with sizes that are not allowed according to the contract;  the quality of welding and grinding on the outlet is poor; the turbine runners are not suitable for installation and operation; the runners need to be checked thoroughly and repaired” [Norconsult Inspection Report 20th March 2014]

Norconsult provided a list of the possible consequences of these defects, which must have struck horror into the top management of SEB and the leaders of the Sarawak State Government when it hit their desks last March.

Outcomes could range from small to total breakdowns of the machinery and flooding and fires in the power house.  Yet none of this, known officially since March, has yet been made public: 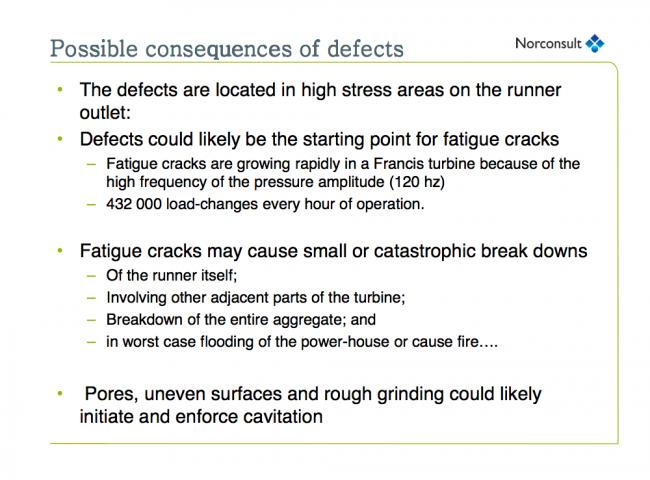 Simply not suitable, given the catastrophic defects

SEB and the State Government started this project in secrecy, poured in billions of ringgit in the face of loud opposition and what they are now keeping secret is that the turbines they have commissioned are not fit for the job of producing their much trumpeted hydro-electricity!

Damage control and cover up?

Far from admitting the problem, evidence made available to Sarawak Report indicates that SEB and their contractors in the Three Gorges Dam company (TGDCM) have opted for a highly risky and unusual attempt to secretly repair the turbines in situe at the dam site.

Sarawak Report has obtained letters and documents showing that a meeting between SEB, TGDCM and Harbin, the Chinese state-backed turbine manufacturer in March decided upon an attempt to repair the poorly constructed blades on site, while not discounting the possible need to remove some of the installed turbines. 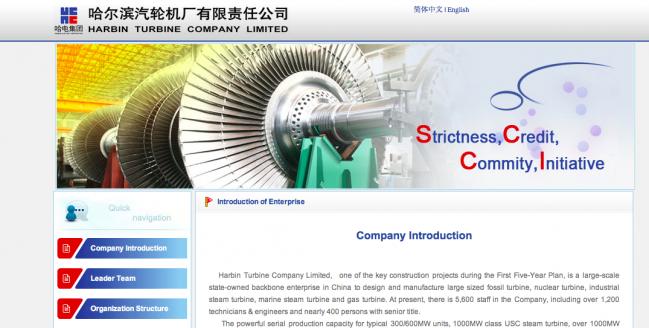 The manufacturers behind the Murum turbine failures?

A list of action points was drawn up which envisaged a controversial schedule involving doing the necessary welding and grinding on site. 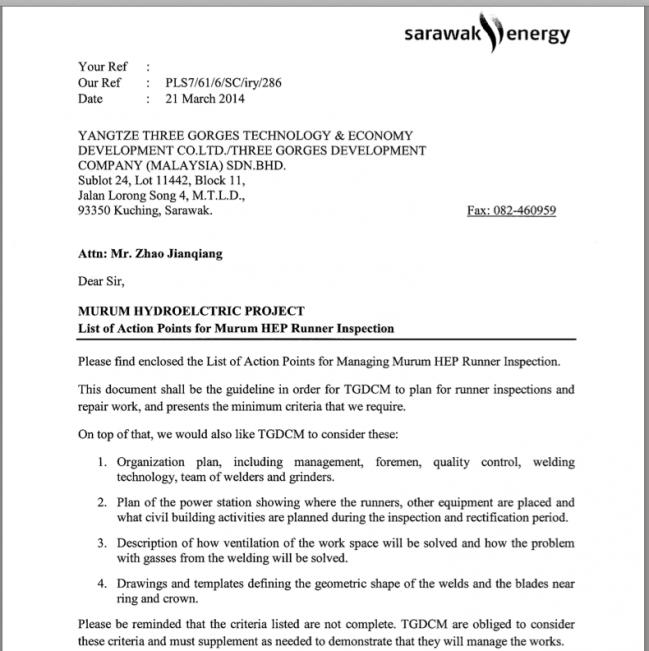 Sarawak Report has yet to obtain ground reports on whether this operation has yet been carried out or how successfully. However experts warn that SEB and their partners are undertaking a highly unusual if not unheard of path with this high-risk, on site approach to such extensive repair work.

Professor Kammen explains the risks of repairing on site are daunting:

“This is a very awkward thing they are trying to do. It will be very hard for them to align and calibrate the blades to a perfect even balance when they are not in the machine shop. I would be totally amazed if it was possible to do a proper alignment in situ. This looks clumsy, I have not seen this type of repair done in such a way before and it does not bode well for the long term performance of the dam“

By far the safer and more reliable route would be to remove the defective turbines and replace them with properly calibrated machines, says Kammen, because at least these will able to reliably produce the required hydro-power. 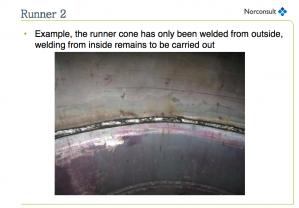 However, such a route would involve admitting what has happened to the people of Sarawak – a situation that can only be put down to incompetence in high places.

Now that the cat is out of the bag, SEB stand warned by experts that a bad situation could be made worse by the cack-handed repair job being proposed in situ.

It means poorly spinning turbines could soon grind to a total halt, leaving the controversial and destructive Murum Dam with no hydro-power capacity at all in very little time.

If the main point of building Murum was not to produce electricity but to raise billions of ringgit that have ended up in politicians’ families’ pockets, maybe the powers that be in Sarawak and SEB don’t care.

But, the people of Sarawak do care and SEB’s Torstein Dale Sjotveit owes Sarawakians an explanation as to how exactly, with all his expertise, he managed to commission faulty turbines costing hundreds of millions of ringgit without checking them properly before installing them?

FOR THE FULL REPORT ON MURUM’S TURBINES CLICK HERE 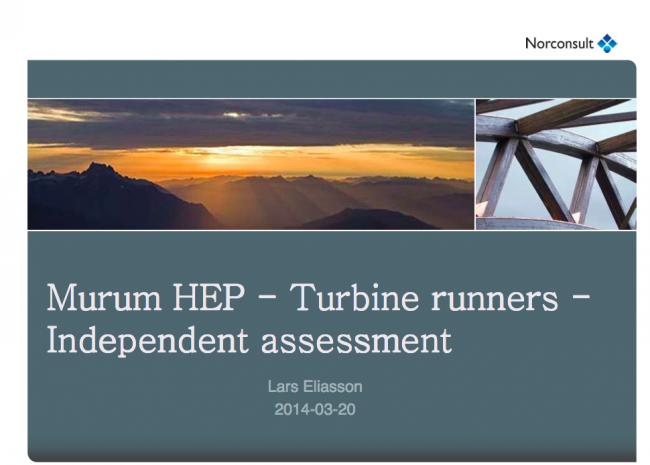