Penang born Jho Low became famous back in 2009, when photographs of him popping magnums of Cristal champagne with the likes of Paris Hilton emerged in US gossip columns. This, of course, was during the aftermath of his theft of USD$700 million from Malaysia’s development fund (1MDB).

In the following years, Jho Low was seen throwing parties the likes of which, Las Vegas, Hollywood and San Tropez had never seen before. 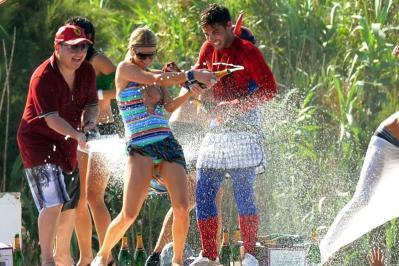 Jho Low was keen to shun his party boy image

To counter the damaging impact of this public debauchery, just as the scandal of 1MDB started to unravel and become dangerous, Jho Low evolved a PR offensive to transform his image into that of a benign philanthropist, buying influential supporters in the process.

From this point on he started to take pains to keep his wanton billionaire lifestyle secretive – in future, his lavish parties involved strict security, complete with non-disclosure forms and confiscated phones.

Attempting to keep his partying below the radar, Jho Low has since taken to social media to promote himself as a very different character. Sarawak Report has been following Jho Low’s new philanthropic activities and has compiled a list of the donations and charity partnerships that Jynwel have publicly acknowledged.

Malaysian money, but charity in the US

Although the Jynwel Foundation is based in Hong Kong, its website shows how money has been donated to organisations in the United States. Many of these charities are certainly worthy causes, but Malaysians will be asking if their money could not be better spent at home. Take for example the rural states of Sabah and Sarawak in East Malaysia, where communities are in dire need of basic infrastructure, healthcare and education.

Malaysians have been taking to Twitter to ask Jho Low why he isn’t supporting worthy causes in Malaysia.

So who have Jynwel Foundation been supporting since 2012?

Among other causes, Jynwel Foundation have committed to saving the world’s wild cats and their eco-systems (Panthera), protecting the ocean (National Geographic), supporting cancer research (MC Anderson Cancer Center) and enhancing and influencing global communications and reporting on issues related to the United Nations global goals and the post 2015 development process (with the UN Foundation).

We believe the following list is not comprehensive and therefore invite our readers to add to the growing list. 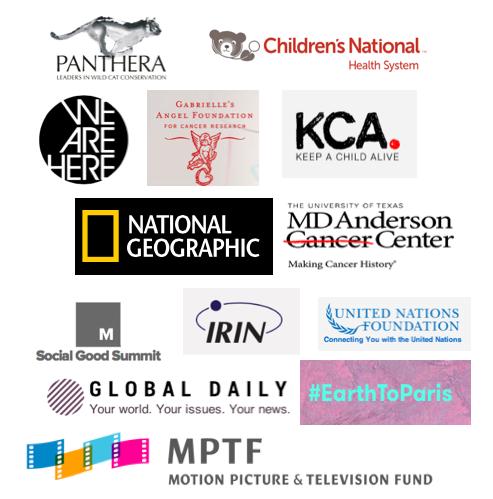 Worthy causes but could money have been better spent in Malaysia?

Jynwel Foundation do not publicise their donations online so it is unclear how much has been spent over the past few years, but the following information give readers an insight into how much money is finding its way into the United States.

– In 2014, a global alliance including Jynwel Foundation committed USD$80 million over 10 years to save the world’s wild cats and their eco-systems. 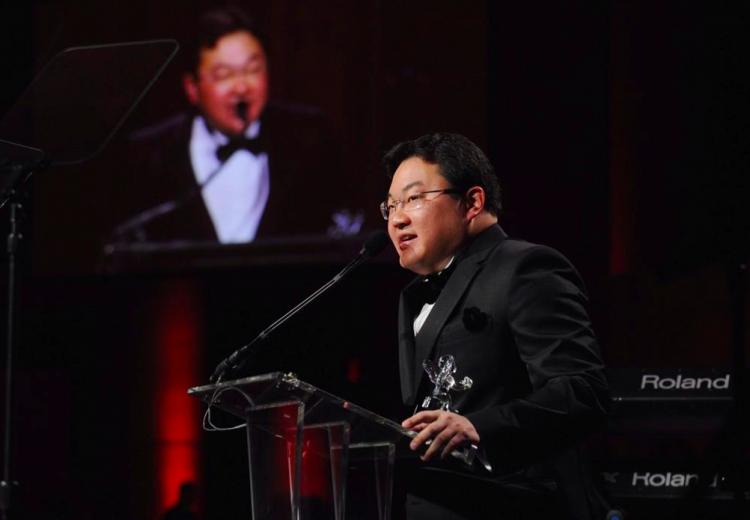 Until recently, Jho Low was making regular appearances at glitzy charity fundraisers in the United States.

Jynwel’s donations have also allowed Jho Low to position himself on the boards of many of the above organisations including IRIN, The Anderson Assembly, Children’s National Health System, Panthera, Gabrielle’s Angel Foundation and even National Geographic’s Council Of Advisors. 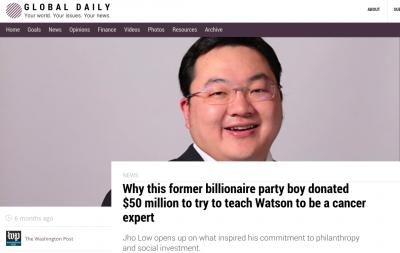 Jho Low is featured as a philanthropist on the website he funded.

In April 2015, Jynwel Foundation and Thomson Reuters announced a partnership with the UN Foundation to “enhance and influence global communications and media reporting on issues related to the new global goals and the post 2015 development process.”

Among other projects, the website Global Daily was launched and it wasn’t long before Jho Low’s philanthropic activities were being mirrored on the site.

Malaysians are therefore entitled to ask what kind of due diligence was taken by the above organisations before they accepted financial support from Jho Low and the Jynwel Foundation.

Sarawak Report have contacted the UN Foundation and Global Daily on a number of occasions but received no response.  We have even posted on their Facebook page: 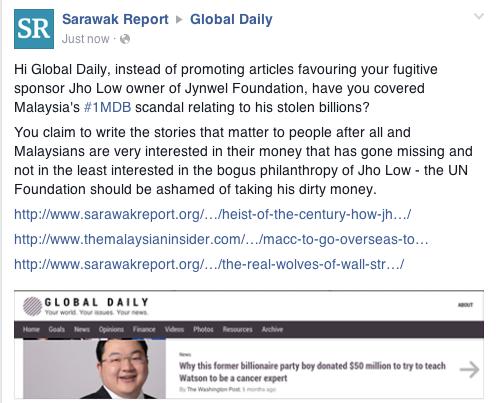 In December, Sarawak Report pointed out to Global Daily that by promoting Jho Low, they could well face criticism from the Malaysian public.

Their response was to swiftly remove our post…. so we know they have noted our warnings but are refusing to listen. In fact, they are still happily working hand in hand with this thief, who dares not suing us for calling him what he is.

The UN Foundation must now be aware that Jho Low and his involvement in one of the largest recorded acts of kleptocracy in history is being closely investigated by law enforcement agencies, including the FBI.

When this crime is finally brought to book the officials responsible will be exposed for having wilfully and hypocritically looked the other way, while taking as much of Mr Low’s stolen money as they can get.

It is not enough to say that Jho Low has not yet been convicted in a court of law. Their due diligence should have by now delivered a red light warning that this young gentleman and his money come with a barrage of concerns over the origins of his wealth.

Tweeting happily together as Jho Low funds the UN Foundation

The slightest investigation would have shown the existing evidence over his role in the plunder of Malaysia’s development fund, 1MDB.

Sarawak Report will not remain silent about how the UN Foundation, which purports to work for the benefit of the under-privileged and to campaign for the environment, has knowingly taken money from a bunch of kleptocrats who have feasted from the destruction of the Borneo Jungle and the exploitation of its indigenous peoples. 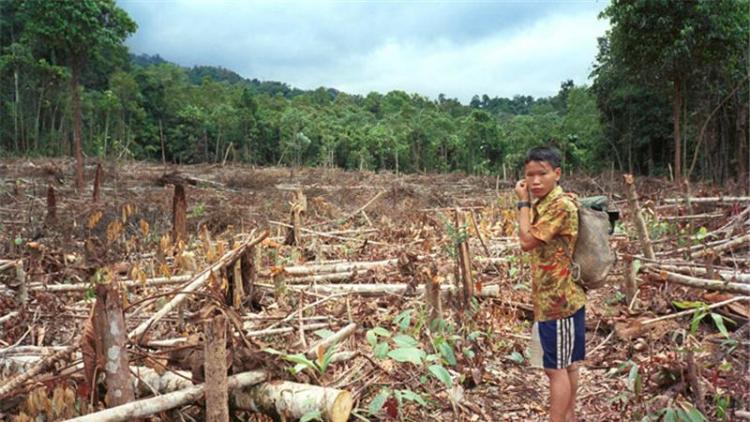 What about Malaysia’s rural communities who are dire need of access to adequate healthcare and education?