Back in February of last year, when Sarawak Report released the PetroSaudi Papers, we pin-pointed the Zurich subsidiary of Britain’s best connected bank, RBS Coutts, as being at the centre of this scandal.

It was RBS Coutts, which had facilitated the transfer of US$700 million into the account of Good Star Limited into its Zurich branch on September 29th 2009 from 1MDB.

This was despite a frantic exchange between the bank’s own compliance officers and 1MDB’s Deutsche Bank, because Coutts said they could not identify the beneficial owner of that account.  That exchange was secretly emailed by 1MDB CEO, Shahrol Halmi, to the Directors of PetroSaudi, then back-copied to Jho Low, who mailed back to his co-consipirators at PetroSaudi not to worry, because “it should be cleared soon”. 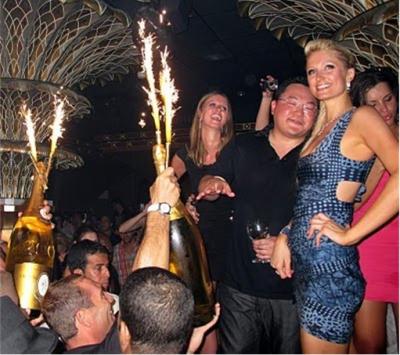 Jho Low was the owner of that account, meaning that Coutts was faced with a highly politically exposed person, with a close connection to this public deal, because of his role as official advisor to the Prime Minister and active orchestrator of the joint venture.

It was therefore about as suspicious a transaction as any bank could expect to ever encounter, involving vast sums, politically connected operators and a government deal being conducted at breakneck speed.

Nevertheless, Jho Low was right and it was indeed swiftly “sorted”.

For those of us who face the petty inconvenience of ‘anti-money laundering’ regulations by these self-same banks on a daily basis, with regard to small sums, it is an outrage that such a vast and crooked sum of money was readily processed by Coutts, even though it had been picked up as a red flashing light by its own compliance staff. 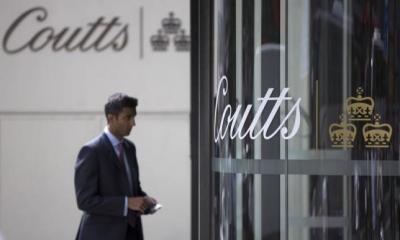 London HQ is not being investigated….

Coutts is the UK’s poshest bank (they hold the Queen’s account): their then Zurich Chairman was Earl Hume, son of an ex-Prime Minister and (coincidentally?) a patron of the British Malaysia Society.  At the time Coutts was ultimately owned by the UK Government controled RBS Bank (it had been bailed out by the public after profligate management had brought it to its knees in 2008)..

Yet, when Sarawak Report exposed this shocking action on February 28th last year there was stony silence from all concerned. It has taken a year of dogged campaigning and increasing international publicity before we have reached the stage where the Financial Times was able to break the news yesterday that Coutts has announced that it is pleased to be cooperating with the Swiss regulatory authorities on this matter.

It is for this reason that Sarawak Report has identified a barrage of ‘foreign helpers’, without whose willing law-breaking the likes of Najib and Jho Low would never have been able to plunder their fellow Malaysians.  These rogue bankers, accountants, lawyers, PR people and other ‘professionals’ behaving as crooks should be identified and properly punished, in order to warn others tempted to make their fortunes from the kickbacks on dirty deals.

So, what appears to have happened at Coutts?

The Swiss regulators will eventually unpick the sequence of events. However, there is always concern that such ‘white collar’ crimes are conventionally settled behind closed doors, with a negotiated fine of the bank (paid for by their innocent customers), the details kept secret and a mere rap on the knuckles for the crooked bankers.

Why are bankers thus immune from punishment, when ordinary thieves are sent to jail, we might ask?  Is it because they seek to control our politicians and have wrapped their tentacles around our institutions and our legislative processes?  The simple answer is yes and it should stop. 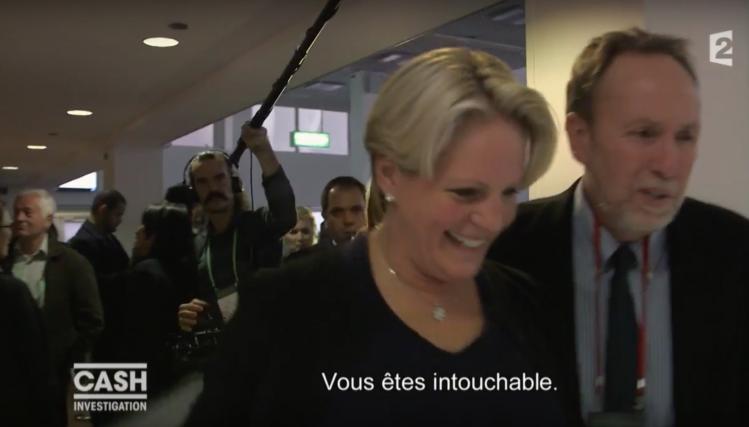 “Don’t worry – you are untouchable”! -1MDB thief Khadem Al Qubaisi’s banker Arriane de Rothschild is comforted by a companion after being questioned by journalists. She plainly agrees that she and all her fellow bankers are indeed immune from the consequences of laundering 1MDB’s cash!

Just a week ago the outrageous crooks at Goldman Sachs were fined just US$5 billion by US regulators for bringing the global economy to its knees, thanks to their money-grubbing and illegal behaviour during the sub-prime mortgage crash.  It is of course, the customers, who will eventually pick up that fine, not them. Indeed, not a single banker has been jailed for the illegal and irresponsible behaviour that till this day is causing suffering amongst the poorest in all of our societies, who are bearing the brunt of cut backs and ‘belt tightening’, caused by the impact of this crash. 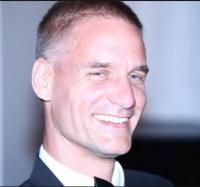 And, of course, just a couple of years after that mega-crash of 2008, Goldman Sachs and their bogus South East Asia boss, ‘Dr’ Tim Leissner, were already turning their attentions to Malaysia in a new money-making venture, namely the rape of 1MDB. We all now know what went on there…. but we are still to hear exactly how the global regulators are going to deal with these bankers once their investigations have been completed.

Back to Coutts and what happened to “clear” the Jho Low, Good Star payment.

Sarawak Report believes that it is significant that it was Coutts Singapore which had participated in the incorporation of Good Star just a few months earlier in the Seychelles.  Their Singapore branch was cited as the “principle client” of the beneficial owner, named as Jho Low, in the Seychelles company register.

So, when things got a bit sticky at the Zurich end, was it to his Singapore Coutts contacts, such as HansPeter Brunner and Yak Yew Chee, that Jho Low turned to smooth the process?

What we do know is that the following month HansPeter led the biggest ever defection in private banking history in Singapore, marching over to the ambitious new branch of rival BSI bank and taking Yak and no less than 70 other employees with him in the process. 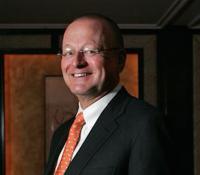 We also know that HansPeter (who incidentally decided to retire a month or so back, as temperatures have risen around BSI) then started, together with his relationship manager Yak, to absorb a great deal of Jho Low’s business, including the transfer to BSI Singapore of no less than US$530 million of that US$700 million payment to Good Star, originally lodged with his previous employers at RBS Coutts, Zurich.

Brunner’s BSI department also took on accounts for 1MDB, SRC, Aabar and Brazen Sky, covering the whole panoply of dubious operations being managed by Low to extract and launder money from 1MDB.  These BSI transactions are now at the centre of a massive investigation by Singapore’s Commercial Affairs Department (CAD), who have arrested no less than two of the bank’s employees and are questioning others.

The CAD last week described it in a court hearing as by far the most complex cross border money laundering operation they have ever had to investigate, involving “staggering amounts of money” – money belonging to Malaysian taxpayers, of course.

We therefore believe that the Swiss national, Mr HansPeter Brunner, who carried away various awards for being Asia’s top banker at the time, might have some very helpful insights to share on the matter generally.

After all, the 1MDB story is throwing up a rather tight circle of key players as matters come to a head – including himself, PetroSaudi’s directors, the now arrested former executives of Aabar, plus of course Jho Low and whoever it could possibly have been who engaged Mr Low to do all this plundering and then allowed him to splash away hundreds of millions in champagne, yachts, paintings, parties and dodgy ventures….

The full Financial Times story is available here, with an excerpt below: 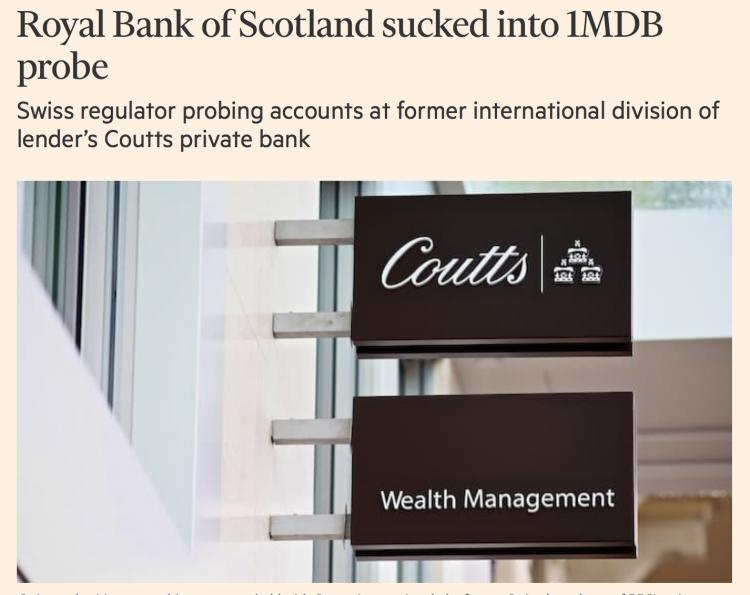 Royal Bank of Scotland has become embroiled in the global investigation into alleged corruption relating to Malaysia’s state investment fund, 1MDB, with the Swiss financial watchdog opening a probe into the lender, according to two people familiar with the matter.

The Swiss authorities have launched an inquiry in relation to “certain client accounts held with Coutts,” the former Swiss-based arm of RBS’s private bank, the bank disclosed on Friday, adding that it is also co-operating with regulators in other countries in relation to the same accounts.

The people said both statements referred to accounts connected to alleged wrongdoing in Malaysia. RBS sold Coutts International to Union Bancaire Privée last year but the bank said on Friday that Finma’s enforcement proceedings were focused on the period when it still owned the Swiss private bank.

Switzerland’s attorney-general said in January he had found “serious indications” that at least $4bn had been misappropriated from Malaysian state companies, following a criminal investigation related to 1MDB. The affair has rocked Malaysia’s ruling elite, and embroiled the prime minister Najib Razak, who chairs 1MDB’s advisory board.

Swiss authorities say a small portion of the $4bn was transferred to accounts held in Switzerland by former Malaysian public officials, and former and current officials from the United Arab Emirates.

Those familiar with the situation told the Financial Times that two payments totalling $860m were made between September 2009 and September 2010 from 1MDB to an account in Coutts’ Zurich branch, known as the Good Star account…..