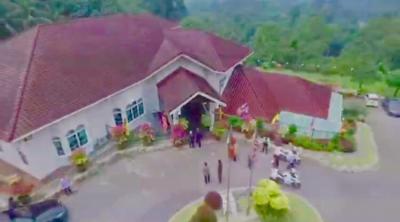 Speaking in Sarawak at the weekend, Najib called Adenan a “member of the gang”.

In the context of Malaysia’s criminalised political scene, it did not make for much of a joke.

So, why has Adenan, after months of keeping his distance from Najib’s unravelling scandals, now signed up to bless his federal ‘gang’ boss, the very moment that it has become evident the PM is about to get busted?

The answer is the usual one, which is that money in the form of mixed denomination notes is now flowing through the Sarawak BN party machine, as Adenan sets out to fix this election in the way that it has been done all his political life.

Insiders have told Sarawak Report that the operations centre for the bags of cash is none other than the Chief Minister’s luxury home in Santubong.  Senior members of SUPP have already been round there to pick up their share.

The source of the cash? Sarawak’s timber tycoons and Najib’s agent, Bustari Yusof (seen clambering out with Najib from helicoper above), say PBB insiders.

Sarawak rural voters have been educated to understand that this is how democracy works and that they are lucky to be able to sell their votes at election time.  This, BN tells them, is ‘progress’ and keeping the money flowing through Sarawak’s “safe deposit” is Najib’s priority to keep his party and himself in power.

Adenan confides in speech to friends that Malays must stay in charge in Sarawak.

Indeed, without their ability to buy votes in Sarawak/Sabah BN would have long since lost its majority in Federal Malaysia and this was the reason why Najib has openly admitted that he used money from 1MDB to channel his bogus “Saudi royal donation” into his election fighting account at AmBank in March 2013.

Otherwise, the PM would more sensibly have kept all of his 1MDB haul safely off-shore. 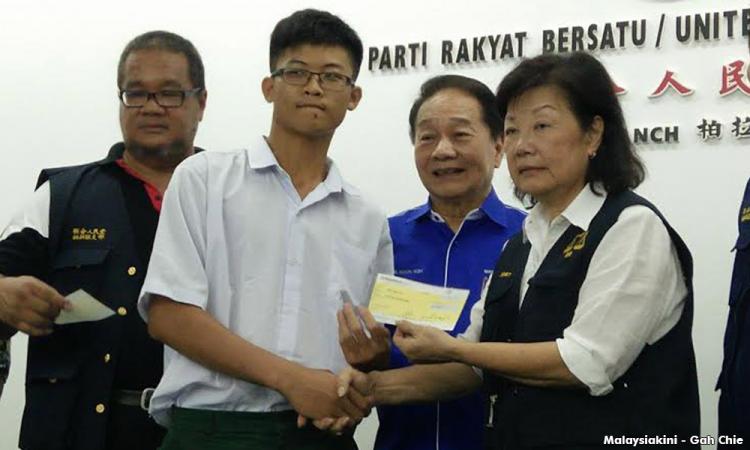 Satem’s timber tycoons are up to the same thing – elderly Janet Lau of the KTS family has been appointed as a ‘direct’ candidate by Adenan and is handing out mega-cheques, claiming it is merely a charitable coincidence!

Insiders have confided that Najib pump-primed his KL AmBank account to over a billion dollars in March 2013, because he had feared he might lose the BN majority and have to shell out extremely large sums of this taxpayers’ cash to buy over individual opposition MPS.

In the end he was able to save on that money and, as Sarawak Report originally revealed back last year, he returned most of the money back out of Malaysia shortly after the election.

This having been exposed, Najib has tried to argue that he gave the money back to the unidentified “Saudi royal donor”.  The account he used from the company Tanore Finance Corporation, has emerged as having been set up by Jho Low’s fixer Eric Tan. Why did the ‘Saudi Royal’ donate his billions through such a route? 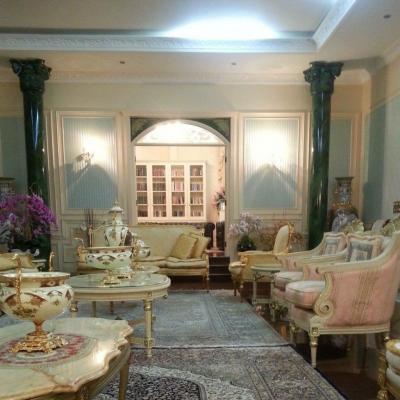 Now the same game is on again, in the same Sarawak state, and Adenan playing ball with both Najib and Sarawak’s traditional timber tycoons to make sure of victory.

After months of acting the reformer and showing a cold shoulder to Najib, he has now embraced the Prime Minister and all the money that is being handed out in his own living room, according to our sources.

Flying in, yet again, on Sunday to check on progress (see main image), Najib was again accompanied by his key agent in this matter, Bustari Yusuf, whose brother has positioned himself, with Najib’s support, to replace Adenan, as soon as is decent after the election.

Meanwhile, Adenan was lecturing the opposition not to discuss Federal matters in an election that is being micro-managed by the Federal Prime Minister.

How Adenan is being managed by Najib

However, these developments are causing friction and concern within Adenan’s local PBB party, which has thrived for months off the new chief minister’s supposed independence from KL and his supposed ‘reformist’ stance – all now jettisoned.

Najib has adopted an aggressive strategy with Sarawak, according to PBB insiders, which goes well beyond merely supporting an Adenan win.  They have confided fears to Sarawak Report that the Prime Minister is moving together with the super-wealthy Bustari brothers to achieve an UMNO takeover of the local party once Adenan goes. 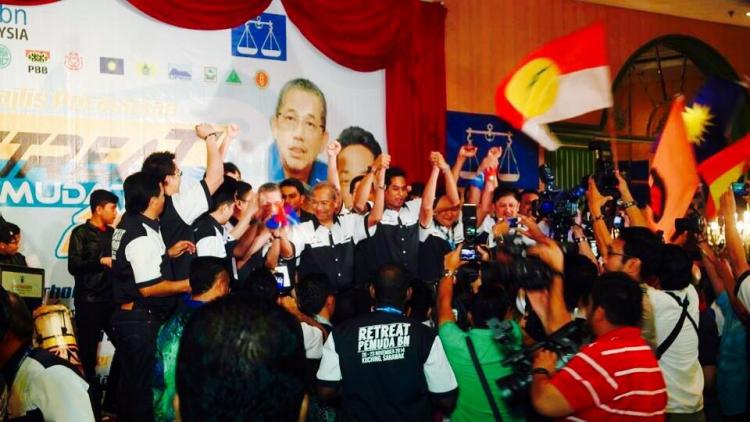 Adenan appearing at one of Fadillah’s Sarawak ‘youth gatherings’ – note the UMNO flag in the centre of it all!

The blatant positioning and channelling of funds to the Bustaris has therefore created a rift beneath the surface of Sarawak’s main BN coalition partner, which has always traded on its alleged independence from KL with local Dayak voters.  Najib wants that independence ended, say PBB defectors, so that he can get a more direct hold on the wealth of Malaysia’s richest resourced state.

To this end they say Najib has orchestrated the siphoning of  major chunks of Sarawak’s infrastructure and health budgets into companies controlled by Bustari Yusof, as we reported already this weekend.

Fadillah is frequently wheeled out by UMNO these days – how come?

Meanwhile, his brother Fadillah, head of Sarawak PBB’s youth wing, has been developing his UMNO links in KL in the course of his role as the Federal Minister of Public Works.

Fadillah finances the Sarawak youth wing, something the Bustaris have positioned themselves financially to do by giving themselves public contracts such as the Borneo Highway (handed by Fadillah to his brother Bustari with Najib’s blessing).

Fadillah has also become a promoted speaker within Federal UMNO, the same malcontents explain. Why?

The plot, they claim, concerns the candidate for Tupong, Fazzrudin Abdul Rahman (who tactlessly wears UMNO red, rather than Barisan blue).

Fazzrudin, Fadillah’s former political secretary, is one of a number of Fadillah’s placemen in the PBB list of candidates, who is believed willing to step aside to allow Fadillah to take a State seat the moment he needs it to come back and become leader.

The deal, they claim, is that Fadillah will be Najib’s man in Sarawak, much in the same way that Taib and his uncle represented the party before.

Adenan has himself bought into this system throughout his political career – after all he is on record as saying that “only Malays” must be allowed to control the non-Malay majority in Sarawak!

The PBB dissenters have provided Sarawak Report of their list of identified Fadillah/Najib controlled candidates within the PBB election list – they say they represent half, i.e. 20 of the 40 PBB candidates:

Adenan has of course moved to create his own power base within the BN coalition, using his creation of a mass of constitutionally illegal new seats in already tiny rural areas to do so.

He has appointed no less than 11 so-called ‘Direct Candidates’, in an unprecedented move to secure place-men, who belong to no party and who are therefore entirely loyal to him. 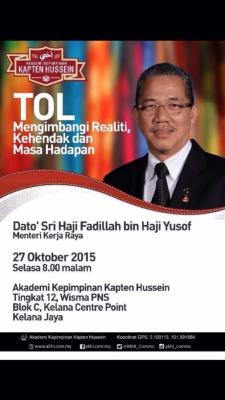 Star turn all over UMNO?

It is a further erosion of Sarawak’s already tattered democratic processes by the man who has spent the last couple of years telling the world that he is a reformer.

To rub salt into the wound, half of these candidates are blatant representatives of Sarawak’s most wealthy timber families, who have for the past half century worked hand in glove with BN politicians to plunder the state.

Indeed, Adenan “the reformer” shocked listeners when he announced a few days ago that only these families could manage Sarawak’s timber business and that was why he was backing the status quo and would resist ending their monopoly of licenses in the state.

It is why Sarawak voters must understand that elderly Adenan and his line up of elderly timber tycoons are all about preserving the present regime against change and reform and they (along with Najib’s behind the scenes rivals to succeed him) are using all the same old tactics and faces now that the gloves are off and the election battle is on.