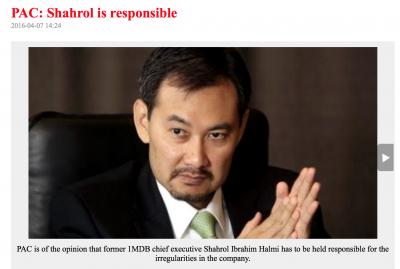 How the papers blared it out

The reason why the Parliamentary Accounts Committee (PAC) was permitted to publish their damning report on 1MDB was that it blamed Sirul Halmi (forgive the typo).

This former CEO must have further got the hint when the entire Board of fellow directors immediately resigned.

The plank awaits and it seems that Sirul Halmi has resigned himself to walk it – blindfold and believing that soon he will be rewarded by the grateful boss. Jail will open his eyes.

Of course, the PAC report doesn’t really exonerate Najib, because he was the ultimate boss and therefore responsible.  Worse, he was more than just the boss of 1MDB, because he had made sure that the articles of association of the company established him as the absolute dictator of it, with no decision possible without his personal agreement. 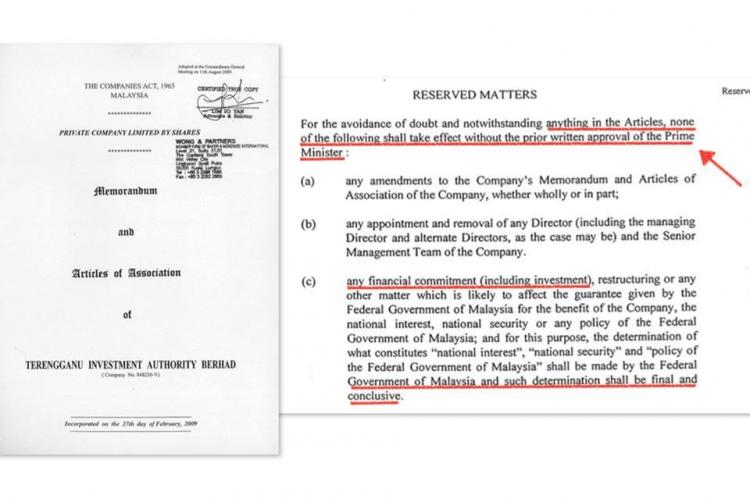 These articles of association had originally been kept hidden and when the scandal broke the PM played the distant innocent – Chairman solely of the so-called Advisory Board of notables.

Playing bewildered, therefore, Najib had authorised investigations into the scandalous revelations provided by Sarawak Report about that original PetroSaudi deal, where US$1.83 billion went missing – most of it into the Good Star bank account controlled by Najib’s proxy Jho Low.

After all, if anything came out, others could be blamed and he could say he was not directly running the fund.

However, a lot more came out than Najib had reckoned on, including the embarrassing fact that billions of dollars had coincidentally wandered into his own bank accounts at the very time they were disappearing from 1MDB.

Of course, we have had numerous changing stories of secret sheikhs and billionaires from Najib to ‘explain’ these matters, but nobody in Malaysia (or indeed the world) believes him.

In fact, one thing this carefully worded report, written by the majority BN controlled PAC, does is to fully exonerate Sarawak Report and all the other journalists and political figures, who have raised concerns about the billion dollar debts of this so-called development fund.

As PAC member Tony Pua has pointed out in his press release and statements, the investigations of the past year have shown that every single allegation made in this blog was true.

Yet, Sarawak Report remains banned by the MCMC for supposedly transmitting “falsehoods” and “lies” and for “forging” documents.  And the Editor continues to face a Malaysian warrant of arrest for “Activities Detrimental to Parliamentary Democracy”, whilst Jho Low remains free to continue to range round the world’s nightspots, spending staggering amounts of Malaysia’s development money.

Who do we think is responsible for that state of affairs?

After all, back last July the Attorney General, The Agong, The Deputy Prime Minister, and several others of Malaysia’s key establishment figures gravely agreed to take the necessary constitutional steps to remove the Prime Minister, owing to these very events at 1MDB.

Tipped off, Najib struck back by using illegal and unconstitutional methods to sack the AG and ignore the warrant drawn up for his own arrest – and then sack his leading colleagues and even change the leader of the PAC.

Guilty?  We think so!

But, even if the reserved criticisms of the PAC were correct and that Najib was merely a useless administrator, blind to the documents he was signing, thereby allowing his CEO at 1MDB to sign off billions into the accounts of Jho Low, he was still responsible.

The mega-disaster fund, which threatens the Malaysian economy (the PAC report confirms that taxpayers are liable for billions in guarantees, which Najib earlier tried to deny) just  mirrors the shocking situation with the PM’s own personal spending accounts.

In exactly the same attempt to deny responsibility, Najib has now admitted millions in SRC public money arrived in these accounts, which he spent.  His excuse is that he “didn’t know”.

However, in both cases, he was the man responsible, whether through greed or moronic negligence, take your pick… or rather leave the matter for the courts to decide.

No room for denial

What matters is that a stage has been arrived at, where there is no longer room for denial for Najib.  He can no longer say that nothing went wrong and that his critics are criminals rather than the men at 1MDB. And he was the man responsible: the sole decision-maker, the sole signatory, the PM and the FM, the man at the top.

The reason lies with key developments in the past few days:

– First, Malaysia’s own Parliament has now judged the criticisms of 1MDB to have been correct and justified and Najib’s months of denials to have been untrue

– Second, the international press has finally established a money trail for over US$100 million from 1MDB, to a fake off-shore company named Aabar Investment PJS Limited and then straight into Najib’s step-son’s Hollywood production company, Red Granite Pictures.  Just three short steps and Najib has failed to sue against the allegations.

– Third, a breath-takingly frank statement by the head of FINMA, the Swiss financial regulator yesterday proved that the global community has also concluded that 1MDB is a criminal enterprise.

With the world shaken by the money laundering scandal exposed by the so-called Panama Papers, it was 1MDB that this senior Swiss enforcer chose as his example of massive crime in this field.

Faced with such a trio of damning developments in the past few days, Najib should of course accept responsibility and go.  After all, take a look at what the normally ultra-discreet Swiss regulator has publicly said in his speech about combatting money laundering:

“We are currently dealing with a number of money laundering cases. And we are talking here not about small fry, but what looks like blatant and massive corruption.…

Money laundering is no victimless crime. It allows criminals to profit from breaking the law. It also facilitates corruption and the abuse of power and privilege. Corruption and tax fraud are the natural enemies of progress, especially in developing countries…

Two prominent current cases highlight the risks I am talking about. A number of Swiss banks are involved in both the corruption scandal surrounding Brazil’s Petrobras and the suspicious cash flows linked to the Malaysian sovereign fund 1MDB. FINMA has carried out investigations into more than 20 banks in connection with these cases, and has opened seven enforcement proceedings against institutions. There are concrete indications that the measures those banks had in place to combat money laundering were inadequate…. We know that suspect funds also passed through banks headquartered in the US, the UK and the Middle East.

There are three particularly troubling aspects to these cases:

A true leader, unable to rebut such accusations would accept defeat. However, Najib plans to sacrifice a lowly chap, namely Sirul Halmi, and blame him instead.

Malaysians know otherwise.  After all, is it Mr Halmi, whose wife buys coloured diamonds by the bagful and who organised a world-record breaking expensive wedding for his daughter?  Is it Mr Halmi, who decided he needed to buy victory in an election he looked set to lose? And is it Mr Halmi, who even as CEO had the sole power to sign off the financial decisions at 1MDB?

Najib Razak has just one last chance to win back some respect from Malaysians and world opinion and some sympathy from history, which is to step down now, in order to avoid causing the further suffering of others.

He would be amazed at how much lasting, generous feeling such a move would create towards him  – but he seems too weak a man to make it.