Why Did Najib Pay RM1 Million To SUPP From His 'Saudi Donor' Account? 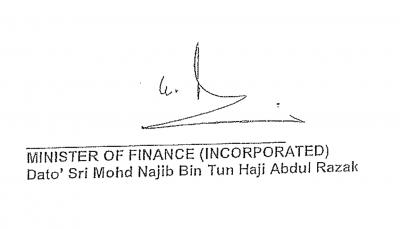 The cheques bear a familiar signature and they represent a known account.  The signature is that of the Prime Minister and the number is that of  his AmPrivate Bank account in KL.

On the eve of the Sarawak election these cheques are visual evidence of payments made personally by the Prime Minister Najib Razak to the BN affiliate Sarawak United People’s Party (SUPP) in 2012 and 2013.

It raises serious questions as to why the Prime Minister and Chairman of UMNO was making personal donations to the supposedly local Sarawak party and what was expected in return?  As one close observer suggested to Sarawak Report:

“Is this the reason why SUPP cannot leave the BN even if 6 of its seats was given away to “direct candidates?”

The fact that there seems no way in which the Prime Minister could have legitimately acquired such sums of money (whether from alleged anonymous donors or not) nor legitimately spent it for political purposes is, of course, at the heart of Malaysia’s 1MDB scandal, which BN Sarawak has been attempting to say has nothing to do with them. 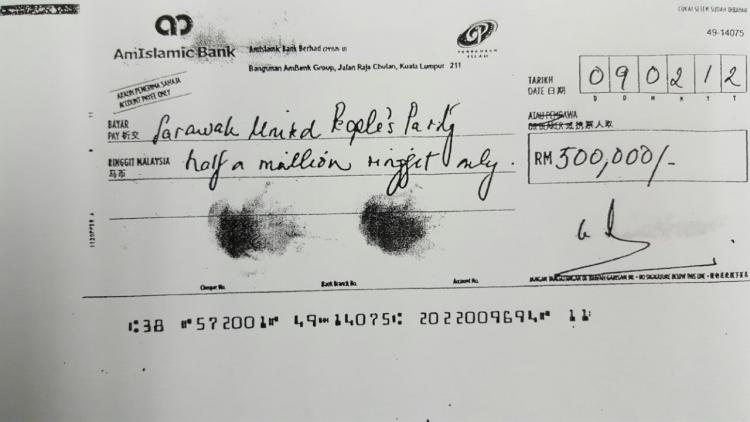 The 2012 cheque – If Sarawak BN have nothing to do with 1MDB or UMNO how come these payments by Najib?

To the contrary, the 1MDB scandal has everything to do with Sarawak, as cheques like this signify.

The fundamental importance of the Sarawak/Sabah “safe deposit” to the continuing dominance of BN and Najib in Federal Malaysia is, indeed, very well known.  In particular, these two Borneo states are regarded as easily bought, thanks to its humble folk, who feel they must obey those who have paid for their votes. 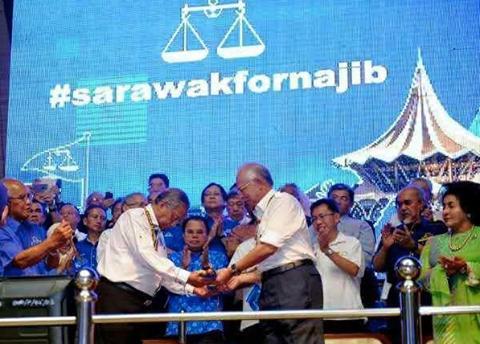 Thank you so much for the cash, said the CM to the PM

If Sabah and Sarawak had not been successfully dragooned by such bribes to support BN at the last 2013 federal election, for example, then the PR opposition coalition would have comprehensively won (after a record 50 years of single party rule by BN it was hardly surprising that they should).

However, UMNO/BN has for decades trained these East Malaysian communities to accept money for their votes, without mentioning that such payments are illegal bribes and a pittance in return for the rich lands and precious liberties of the native people.

‘Saudi donation’ was to secure ‘projects’ for Sarawak

There has been, in fact, no secret about Najib’s agenda to buy Sarawak.

When the excuse of a so-called ‘Saudi Royal donor’ was promoted, in order to excuse Najib of the humungous US$681 million payment into the above AmPrivate bank account in 2013, information was passed to organisations such as the BBC and Telegraph Newspaper, explaining in no uncertain terms that Malaysia’s PM was ‘donated’ the money in order to gain votes in Sarawak in the 2013 election.

The PM’s press chap, Paul Stadlen, directed press to read these particular ‘reliable reports‘, which gave a fascinating explanation for ‘Saudi Arabia’s’ apparent willingness to support projects in Sarawak – it was, they said, to counter ‘Islamic extremism’ in East Malaysia’s defiantly Christian states!

“The purpose of the donation was simple, said the Saudi source – it was to help Mr Najib and his coalition win the election, employing a strategic communications team with international experience, focusing on the province of Sarawak, and funding social programmes through party campaigning.

But why should the Saudis care about an election in a non-Arab country more than 6,000 km (3,700 miles) away? The answer, the source said, lay in their concerns over the rising power of the Muslim Brotherhood, which they consider a terrorist organisation. [BBC Saudi Gift To Malaysian PM Najib For Election Campaign]

Sarawak Report suggests a simpler explanation, which is that much of the money stolen by Najib from 1MDB was poured into buying votes, as usual, to secure BN’s vital ‘safe deposit’ seats in the ‘backward Borneo’ states.

Once again, we invite Najib to sue us for saying so in a UK court of law.

The cheques paid to the SUPP came from Account number 2022009694, into which Sarawak Report revealed last year the Prime Minister was paid US$681 million by the BVI company Tanore Finance Corporation. The revelation caused an international furore and has escalated the scandal over 1MDB into a major political crisis for Najib. 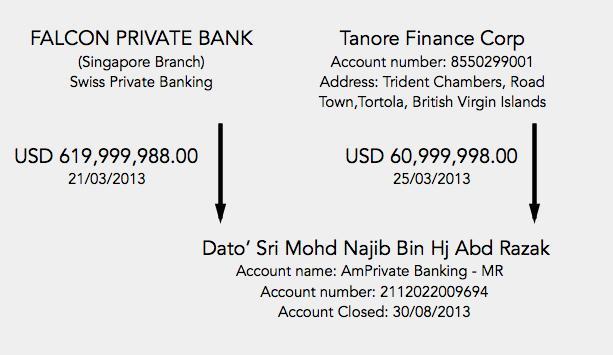 There has been considerable explanation as to why these payments were wholly illegitimate.  No Malaysian Prime Minister could legally accept such vast personal contributions, secretly into his private account, without even informing his UMNO party treasurer and deputies.

This applies, whether or not the money was stolen from 1MDB or supposedly ‘donated’ from an anonymous ‘Saudi Royal’.  Najib and his supporters have made much over the dubious letters supposedly authorising him to spend the money as he likes, but it is not anonymous Saudis who dictate the laws in Malaysia about election funding, which have been breeched.

Next, is the minor issue over unpaid tax by the Prime Minister!

Najibs new, hand-picked Attorney General has nevertheless chosen to accept his boss’s excuses and called him “cleared”, in the face of protests by the MACC, which has challenged the ruling. The Malaysian Bar Association has also condemned the AG’s action for exceeding his constitutional powers.

What is further significant about these payments to SUPP (with that very familiar signature) is that one of these two ‘half million ringgit’ cheques was paid in September 2012, well before the transfer from Tanore Finance  into the PM’s account.

This 2012 payment was also referred to by the ABC Four Corners programme, which received separate information on Najib’s distributions to SUPP and other clients.

It bears out is the information already published by Sarawak Report, which is that this AmBank account was already bursting with cash long before the supposed Saudi ‘Royal donation’ was introduced into it in March 2013.  We have detailed payments of US$170 million in 2011 and later millions more in the course of 2012, which were also substantiated by separately sourced reports by ABC Australia and the Wall Street Journal.

So, where did Najib get that money from? 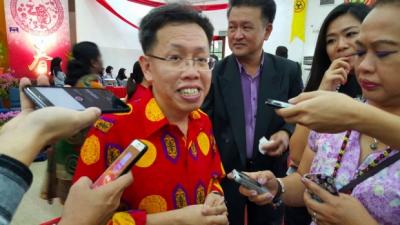 SUPP leader Dr Sim should explain these payments from Najib

We have detailed how much of it came from a company owned by Jho Low, named Blackstone Asia Real Estate Partners (BVI) and was accompanied by a series of letters from a mysterious ‘Saudi’, apparently named Prince Saud Abdulaziz al-Saudwith, who nevertheless had a bank account in a different name of Prince Faisal bin Turkey bin Bandar Alsaud .

The result of all this money that has poured into Najib’s accounts from sources unknown is that it has put the Prime Minister into a commanding position to distribute vast sums of illegal cash into buying Sarawak’s elections…. and plainly also SUPP.

Can this supposedly independent ‘local Sarawak party’ confirm how much in total it has received in such cheques personally signed by the PM, as well as what other cash payments, and, also how it believes these handouts can be justified in the context of a democratic election within the state of Sarawak?