In what appears to be a major step forward in the unravelling of the mystery of 1MDB’s missing billions, Sarawak Report has obtained records of telegraphic transfer documents, which were handed by 1MDB executives to the Auditor General’s enquiry in February.

These indicate that hundreds of millions were channelled from 1MDB, via two Swiss banks BSI and UBS in Singapore, to the fake BVI subsidiary of IPIC/Aabar, called Aabar Investments PJS Limited in the course of 2014.

And they reveal that Aabar Limited’s main bank account in Singapore was held by none other than Switzerland’s top player, UBS. 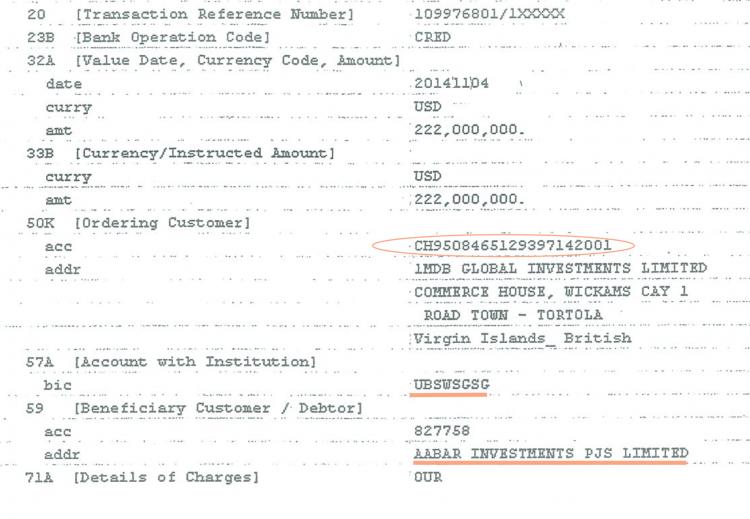 One of 9 transfer documents submitted to the Auditor’s enquiry by 1MDB. The ordering customer was 1MDB Global’s account holder BSI Bank Lugano (see the SWIFT number for BSI Lugano). The beneficiary was the bogus Aabar Limited, using its UBS account in Singapore

The discovery places Switzerland’s largest bank UBS squarely in the spotlight for the first time in the context of this global scandal – the documents show that a total of just under US$2 billion* passed into a UBS Singapore account belonging to Aabar Limited during the course of 2014.

The transfer slips, which the Auditor recorded were produced by 1MDB management at a meeting in February, also show that a major chunk of the fund’s US$3 billion bond issue raised by  Goldman Sachs in 2013 – supposedly to create the aborted Tun Razak Exchange – was in fact also funnelled through BSI Bank in Lugano to the fake Aabar during 2014, using the UBS account.

1MDB had claimed this money was being ‘invested’ by its subsidiary 1MDB Global, however it has already been queried why so much government cash was passed to the small, private BSI Bank after the bond issue by Goldman Sachs?

We can now see that no less than US$1,238,687,500 was apparently passed from 1MDB Global’s BSI Lugano account to the fake Aabar/IPIC subsidiary’s account at UBS in 6 payments in late 2014.*

According to these remittances, UBS used its United States Stamford Branch to conduct the US clearing requirements for the majority of these transfers. 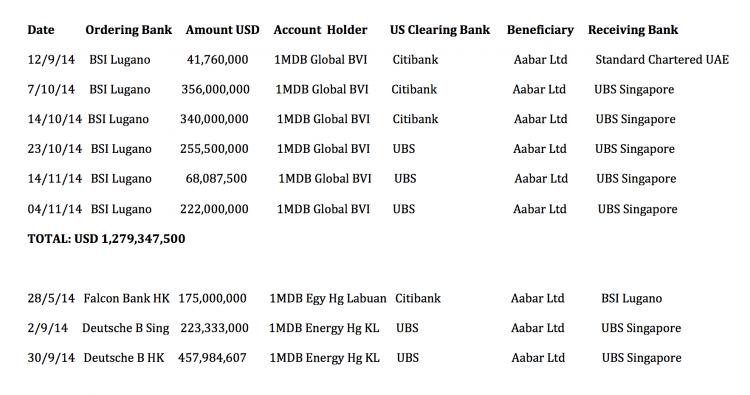 A further three transfers during the same period (May-September 2014) went from a separate 1MDB subsidiary 1MDB Energy Holdings to the same fake Aabar.

The two later payments (above) also went to the UBS Singapore account, whereas the first had been paid  by an off-shore subsidiary of 1MDB Energy Holdings in Labuan (which held an account with none other than the Aabar owned Swiss Falcon Bank in Hong Kong) to a separate fake Aabar Limited account, which was also held by BSI Lugano.

The same transfer slips (examples at base of story) indicate that the bogus Aabar Limited also held a bank account with Standard Chartered Bank in the United Arab Emirates.

The transfers from 1MDB Energy Holdings total a further US$856,317,607 paid into the fake Aabar’s accounts, resulting in a grand total of US$2,133,965,107 received by the fake Aabar through these transfers.

In his report the Auditor has referred to the payments by 1MDB Energy Holdings, which were justified in terms of terminating IPIC’s options and security deposits.  The money had been raised from a loan by Deutsche Bank based on supposed collateral held by BSI Bank in Singapore (later found not to exist).  We now know that money went to the fake Aabar, mostly through UBS.

Rejected by the Auditor!

Yet this evidence and related documents, even though it was presented by 1MDB officials, was ultimately excluded by the Auditor from his report, on the basis that it was belated information and contradicted other explanations provided earlier by 1MDB management for their payments to Aabar Limited (1MDB had been criticised claiming they had settled the same options twice over).

The role of UBS in hosting the fake Aabar account was therefore not included in the Auditor’s main report.

The relatively small private Lugano bank, BSI, has already been shut down in Singapore and is facing a fine in Switzerland and on-going criminal proceedings, owing to its apparent gross negligence in the handling of suspicious 1MDB related accounts.

This devastating new evidence produced by 1MDB itself to Malaysia’s own audit investigation will inevitably extend the same enquiries to Switzerland’s largest bank.

It leaves UBS is exposed for managing the main account for the fake Aabar Limited at its branch in Singapore and for having willingly accepted a series of staggering payments, each worth hundreds of millions of dollars from 1MDB, while failing to apparently notice that the off-shore company was not in fact officially registered under the IPIC/Aabar group of companies.

Given the sums involved, it would seem to constitute a shocking failure of compliance and due diligence by one of the world’s major banks, which recently also lost a legal bid to prevent Swiss prosecutors from examining its accounts held for the Sabah Chief Minister, Musa Aman (earlier exposed by Sarawak Report).

Indeed, it appears that a large chunk of 1MDB’s missing billions were channelled into this single UBS Singapore account, thanks to the banks apparent oversight.

There is one caveat to this information, which is that the Auditor General has described certain material, including these bank transfer documents, as incomplete and even “suspicious” in a paper issued by his enquiry, in which he explained why he had excluded the series of 1MDB papers supplied by management in February from his final audit:

“Remittance Slip regarding payments to Aabar and Aabar Ltd

There are 9 remittance slips regarding payments to Aabar (1) and to Aabar Limited (8) which were presented to JAN on Feb 2016. This important information was not acknowledged or raised during meetings with 1MDB’s management on Dec 16, 2015. The veracity of the form (format?) of documents was suspicious as it does not include written instructions to the bank nor bank statements as supporting documents.” [Auditor’s paper on additional documents presented by 1MDB to the enquiry in February] 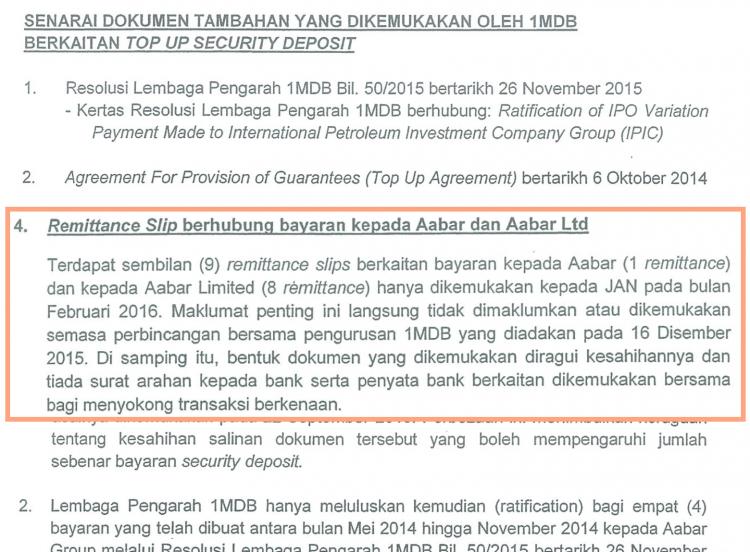 If 1MDB had indeed provided false and misleading information to the Auditor and if these papers and bank transfer documents are indeed fake or forged, then this public exposure represents an opportunity for UBS to set the record straight and deny the bank was involved with the bogus Aabar Limited as 1MDB managers have now alleged.

Either way the implications are shocking, but if what 1MDB claims is true then a huge portion of the missing billions have now finally been publicly traced to this UBS account number 827758 in Singapore held for the bogus Aabar Investments PJS Limited (see base of article).

What the Malaysian public and indeed the global regulators will want to know is what happened to the money next?

The criminal enquiries currently under way have doubtless already asked this very question of a number of Switzerland’s top banking executives. 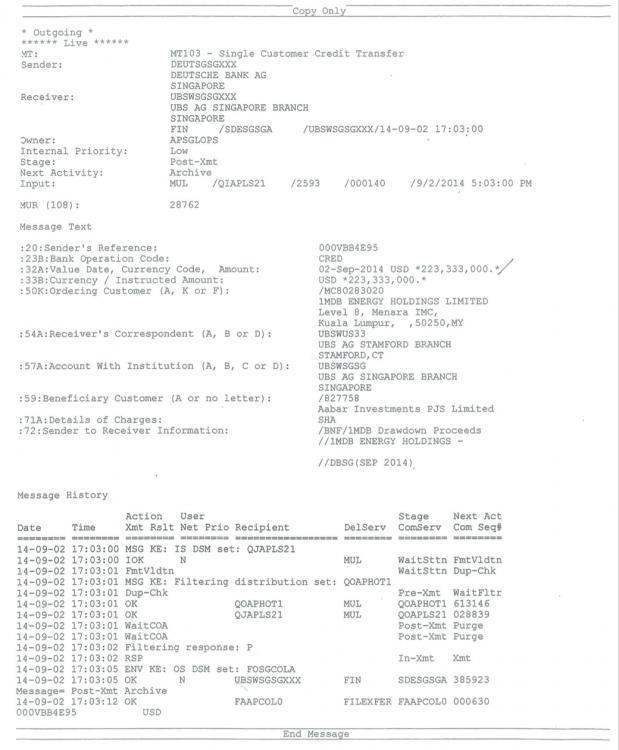 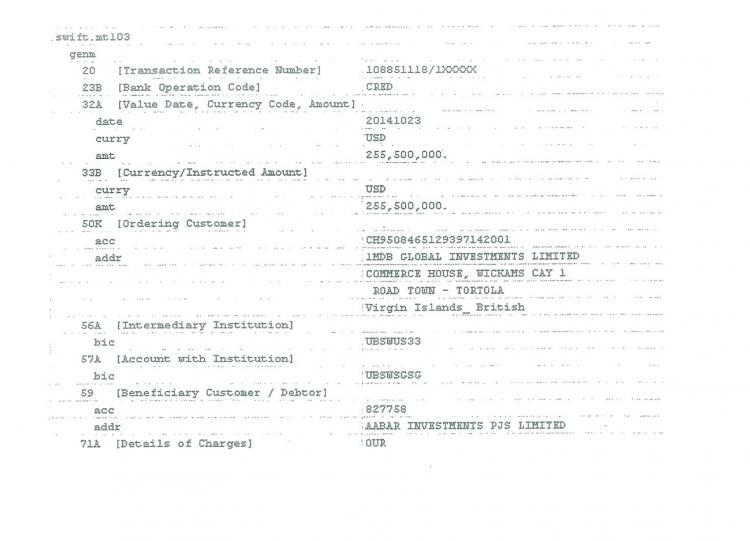