RM1.154 Million From 1MDB Was Spent On 'Anti-Ageing' Products for "B1 and Wife"! EXCLUSIVE

At that price did it work? ‘First Couple’

Further leaked documents from the Malaysian enquiries into 1MDB have been made available to Sarawak Report, which indicate that the Prime Minister and his wife utilised over RM1.15 million of the fund’s stolen cash on purchasing hormone-based, anti-ageing products via a clinic in KL!

They make clear that whilst the PM is referred to by the Department of Justice investigators at “Malaysian Official 1″, he was dubbed “B1″ by domestic MACC officials, who were investigating cash received into Najib’s personal accounts from the 1MDB subsidiary SRC.

In one particular case investigators referred to a RM1.15 million cheque that was spent on:

“2 sets of medication type External Plant Serum Food Application based softgel GH-9 Honey and Honey Food GH-9 Soft Gel at USD159,000 each set for the use of B1 and wife”

Sarawak Report has identified that the recipient of the cheque, which clearly bears the now familiar signature of the Prime Minister Najib Razak, was a doctor and Vice President of an ‘alternative medicine’ society* in KL, which specialises in growth hormone therapy to combat ageing. 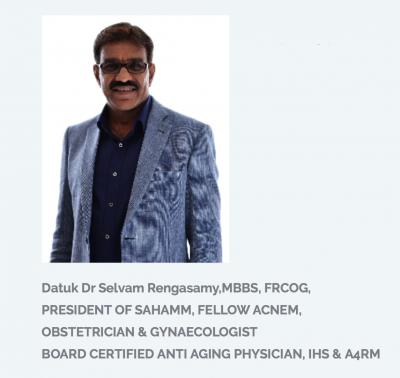 The man in charge of the society, called the “Sahamm Society for the Advancement of Hormones and Healthy Ageing”  is a Dr Selvam Rengasamy.

Rengasamy, who is also a Datuk, appears to promote himself as an ‘alternative’ health guru who has found the secret to all health problems and longevity, through cell regeneration.

Styled more like a rock star than a doctor he stands by his unusual and highly controversial treatments, which are banned in the US and elsewhere, where they are regarded as an inappropriate and dangerous misuse of drugs developed for entirely different medical conditions.

[update] Rengasamy has told Sarawak Report he does not charge personally more than RM600 a month for growth hormone treatment, but cannot speak for other practitioners and has not himself treated the Prime Minister or his wife.

The Malaysian Anti-Corruption Commission (MACC) enquiry into 1MDB focussed on the local diversions of millions of ringgit of SRC cash, which had been originally raised from a RM4 billion from the public pension fund KWAP

AG Apandi Ali “cleared” Najib, but could not deny that the money went from SRC into the PM’s account…

It has been established that altogether some RM70 million was channelled into a series of AmBank accounts belonging to Najib between summer 2014 and early 2015.

However, after sacking the former Attorney General, who was on the point of bringing charges last July, Najib installed his ally, Apandi Ali, who dismissed the charges and ruled the case was closed.

Najib has admitted he did receive the money, but Apandi accepted his excuse that he had not realised that the millions of dollars had come from 1MDB/SRC rather than his “Saudi donor” (money he originally claimed he’d never put to personal use).

The Prime Minister has not been required to pay the money back. 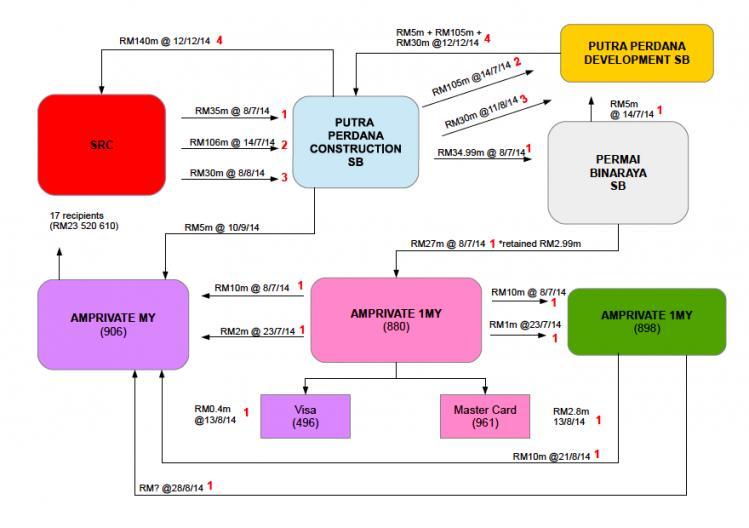 The key accounts detailed in Apandi’s flow charts include the relevant account ending in digits 906….

Such looting from SRC may seem small beer compared to the billion dollars that arrived in Najib’s bank accounts from abroad – money now also confirmed by the DOJ as having originated from thefts from 1MDB.

However, SRC was a home-based investigation and it is significant that Najib has just completed his moves to protect himself by dismissing all top three officers from their posts at the MACC after the organisation challenged Apandi’s ruling that there was nothing illegal.

The world’s most expensive beauty product?

Documents obtained from that MACC investigation show the outcome of enquiries by officials into some of the expenditures made from these accounts. 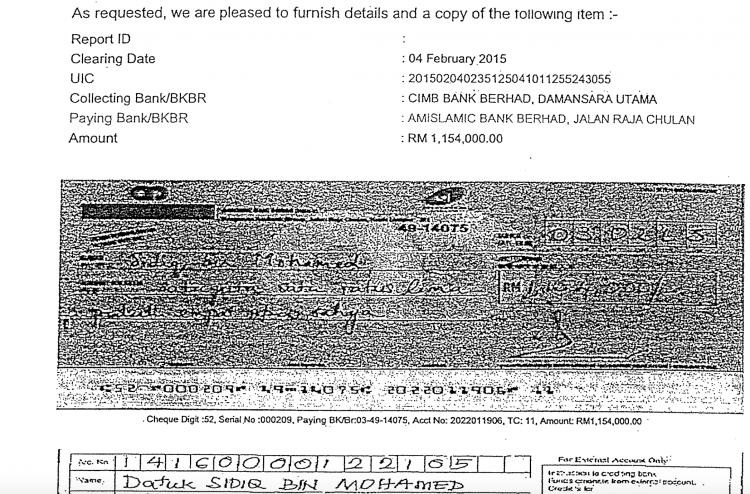 Notes attached to the photocopied cheques suggest that investigators asked Datuk Sidiq the purpose of the payment:

“The purchase of 2 sets of medication type External Plant Serum Food Application based softgel GH-9 Honey and Honey Food GH-9 Soft Gel at USD159,000 each set for the use of B1 and wife”

Who are B1 and Wife?

Familiar signature of ‘B1′ on every cheque!

As with the DOJ indictment the rest of the document leaves little doubt as to whom the investigators meant by “B1 and Wife”.

Because, the next items of expenditure examined from these accounts include several building works and alterations at addresses which are known to belong to Najib Razak and his wife.

These include, for example, RM100,000 for construction work on a police guard room and amenities at their KL residence made payable to an outfit called ABS Trend Master Sdn Bhd on 16th February 2015: 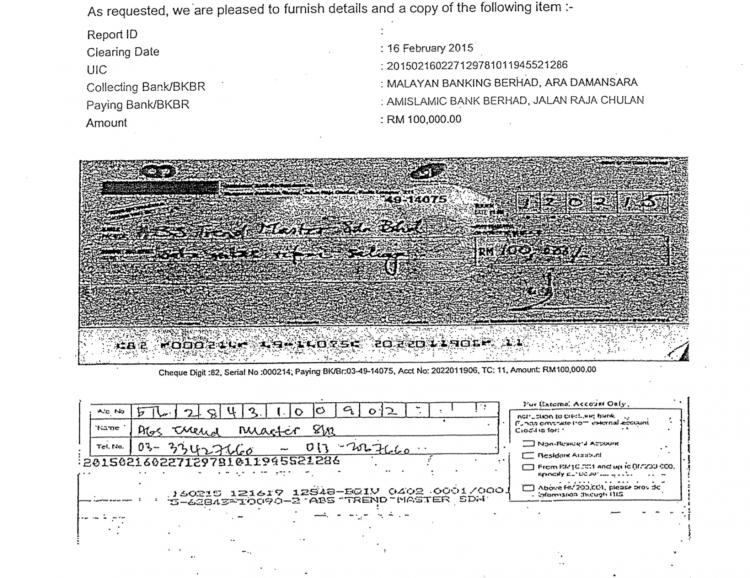 This payment also has a note attached:

It is of little surprise that the expenditures from these accounts, were for the benefit of the “first couple”, given that Najib has admitted that this and the other accounts were in his name.

His excuse is merely that he did not know where the money had come from.

However, what will leave Malaysians gasping is how two doses of serum and an oral product could possibly cost such a huge amount of money?  What possible treatment could this involve?

After some initial bafflement, Sarawak Report believes it has sleuthed the answer to this USD159,000 (X2) question.

The most likely explanation is that the ‘GH-9′ description refers to the ‘Growth Factor 9′ hormone, which is being currently touted as all the rage as an anti-ageing product for the ‘super-rich’.

The highly controversial drug is banned for athletes and illegal to prescribe in the United States, except for growth-related conditions. 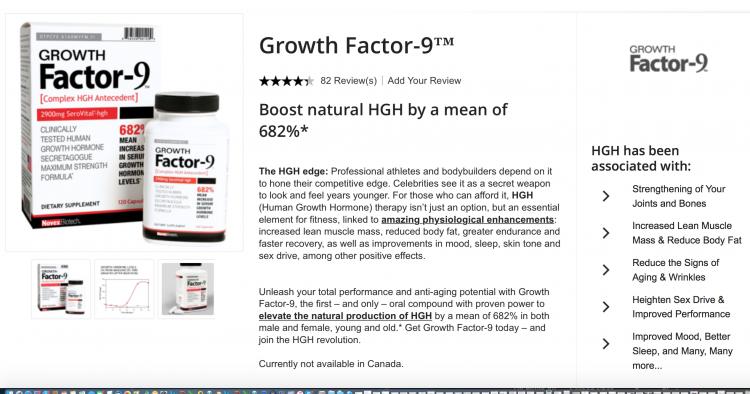 One typical advertisement for GF-9 – is this the product the Datuk shelled out for?

A series of online advertisements describe the product as being the favourite anti-ageing secret of the rich and famous…. a

For the rich and famous….

And we now believe we have tracked down Datuk Sidiq bin Mohammed as none other than the head doctor at the outfit that describes itself as a “Society for the Advancement of hormones and Healthy Ageing Medicine”, based in KL. 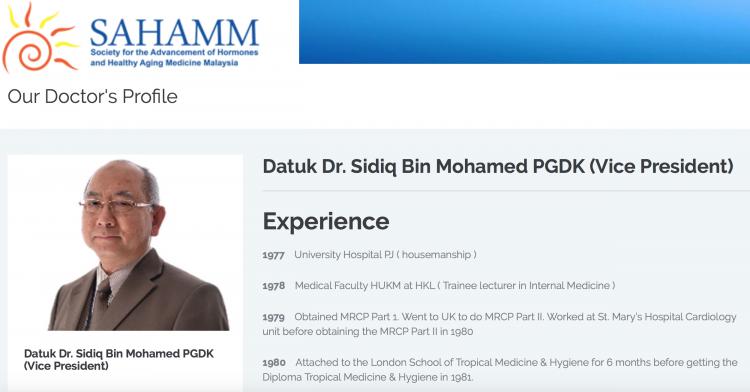 Sahamm touts itself as an ‘alternative medicine’ centre, although of course hormone treatment involves the use of powerful conventional drugs.

It is however highly unconventional to use human growth hormone to promote anti-ageing and physical strengthening.

Doctors would certainly not prescribe such medicaments in conventional medicine. For athletes it is illegal and for anti-ageing it is not an approved use of the drug by the FDA – which is to say that it is also illegal to prescribe human growth hormone for anti-ageing purposes in the United States.

Side-effects can be extremely troubling, including provoking physical and personality problems.

Nevertheless, Sahamm boasts within its copious promotional online literature that it has the secret to bring “life to years and years to life”.

Its trendy boss, Selvam Rengasamy, sums up his enticing approach to treatment and his secret to holding back the years as apparently using conventional medicine in unconventional ways (which are plainly very expensive):

Disease is but a signal from a body that has lost it’s harmony. Conventional medicine treats diseases with patented medicines which is actually a downstream medicine. Healthy Aging Medicine is an upstream medicine where the focus is on prevention, early detection and treatment of age related dysfunction which adds

“LIFE TO YEARS AND YEARS TO LIFE”

Healthy Aging Medicine is evidence based medical care substantiated by medical research and using cutting edge technologies such as Stem Cell Therapeutics, Genetic Engineering and Genomics, Nanotechnology for treatment at the most Cellular Level. 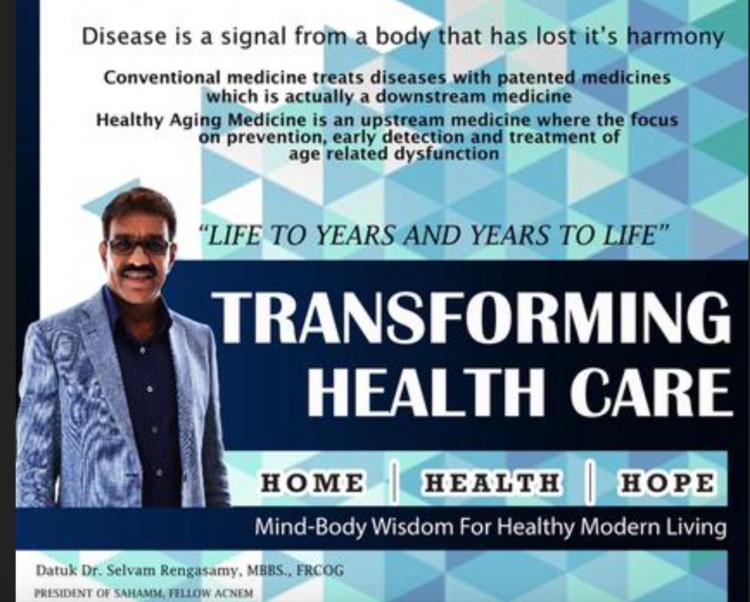 Datuk B1 and his wife perhaps do understand the difference in meaning between “upstream medicine” and “downstream medicine”, which might to others appear to represent the abusive misuse of powerful drugs?

Cautions abound to warn against the misuse of hormones to tackle age.  For example:

“Some people turn to a substance called human growth hormone(HGH) in hopes that it will keep them feeling and looking youthful. But experts say that hope is unfounded. And worse, these products can be harmful.

“Because the body’s HGH levels naturally decrease with age, some so-called anti-aging experts have speculated and claimed that HGH products could reverse age-related bodily deterioration. But these claims, too, are unproven. The use of HGH for anti-aging is not FDA-approved.

Physical side effects can include some of the very things beauty addicts are seeking to avoid, including “Swelling due to fluid in the body’s tissues (edema)”.

There are also serious mental side-effects, according to the literature, which can only be classed as worrying given we are referring to Malaysia’s top decision-makers as major users:

So, given this was public money (and a very great deal of it), perhaps the first couple can enlighten Malaysians what exactly it was spent on by Dr Sidiq bin Mohammed in his unconventional treatment plan and what effects were expected and achieved for the benefit of the nation? 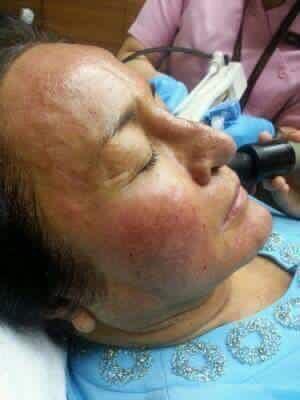 Malaysia’s ‘First Lady’ is believed to be as addicted to treatments, as she is to designer clothing and jewels.

SRC money, as the MACC investigators point out in their report, was supposed to be placed into money making ventures to support development.

Have the public gained from this million ringgit investment in pumping up the first couple with unconventional hormones or can the public conclude that this has been a mammoth waste of money, or worse impacted negatively on the appearance and mental state of Malaysia’s first couple?

If so, is there not a case to answer at the Sahamm Clinic on trade description grounds and for demanding all that money back?

* We earlier referred to Sahamm as a clinic, which is refuted.