Familiar Story Plays Out Against The Native Landowners of West Malaysia 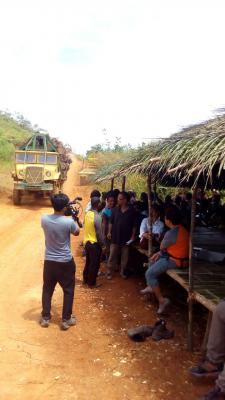 What means but a blockade were left to landowners ignored when they complained about illegal logging?

While Najib and his profligate wife wandered round Berlin talking mega-trade deals earlier this week, native landowners back home were experiencing a cruel injustice at the hands of the state.

It is Najib’s job to protect the rights of all his voters, yet according to the  Center for Orang Asli Concerns (COAC) the folk of Jaringan Kampung Orang Asli Kelantan had their blockade against illegal logging on their land dismantled by armed police, who were accompanied by a gang of 30 un-uniformed thugs.

Such scenes have played out many times in Sarawak in East Malaysia as the backdrop to the wipe-out of the third largest jungle in the world, in a matter of a mere three decades.

These lands and timber do not belong to the loggers, oil palm concession holders or to their political cronies, who had organised their licences for a price, they belong to the native people who were granted these territories as their right at the foundation of Malaysia.

What we have seen in Sarawak, time and again, is the muscling of native peoples out of their land rights by brute force, backed by corrupt political figures and agencies such as the police.  Now here in West Malaysia in 2016 it turns out that we are seeing the very same forces playing out in remaining forest areas and no one is lifting a finger from Najib’s government, it seems, to counter such injustice:

The blockade set up by Jaringan Kampung Orang Asli Kelantan (JKOAK) on the logging road at the Petei junction to Pos Simpor was torn down yesterday by a group of 3 policemen in uniform accompanied by over 30 men.
About 160 Orang Asli from the surrounding area were manning the blockade when they arrived at 2.20pm in 9 vehicles belonging to the logging company. The convoy allegedly brought media representatives with them.
When Mustafa b. Along, 29, representing the community refused to cooperate with them and remove the blockade, he was arrested and held in one of the vehicles. Manglo b. Tegau, 24, and Salim Tegau, 31, were subsequently arrested when the community stood their ground. The ordeal lasted 40 minutes before they were released after the blockade was removed.A chainsaw was used to dismantle the blockade despite the Orang Asli standing their ground. The chainsaw narrowly missed cutting the leg of one of the Orang Asli man, landing to cut his slipper. During the chaos, an unidentified young man with a rifle fired twice into the air, not far from the blockade. The Orang Asli believed that it was done to frighten and provoke them.Once the blockade was dismantled, a lorry carrying logs drove from inside the barrier, forcing the Orang Asli away from the road.

The blockade was set up on 27 September after formal letters to relevant bodies failed to halt logging activities on their customary land at Pos Simpur, Pos Gob and Kuala Bering. 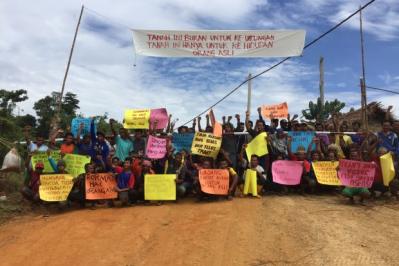 Last bid to protect their land

On 13 September, JKOAK sent a notice to the logging company demanding that they stop their logging operation.

On 20 September, a group of 31 Temiars went to to the Malaysian Timber Certification Council (MTCC), and lodged a formal protest and complaint to them. (All this while the MTCC has been certifying that the logs form Kelantan have been obtained in a sustainable and scientific way, while recognizing indigenous rights at the same time.)

On the same day, they handed a memorandum to the Human Rights Commission of Malaysia (SUHAKAM) on the issue.

The group had also lodged complaints and reports at the Department of Orang Asli Development (JAKOA), the Prime Minister’s office, Ministry of Rural and Regional Development (KKLW) and the Kelantan state.

According to Mustafa, they were not consulted before the logging started early this year. Neither have they receive a reply to any of their complaint letters.
A police report was made at 2am today. JKOAK has confirmed that they will continue keeping up the blockade to defend their customary land. [press release by COAC].

Where was the police chief for the area during such an operation carried out using transport belonging to the logging company itself?

This clear corrupt practice, condoned by people in high places, is the people’s increasing daily lot, suffered not only in the dictatorships of East Malaysia now, but clearly in West Malaysia also. 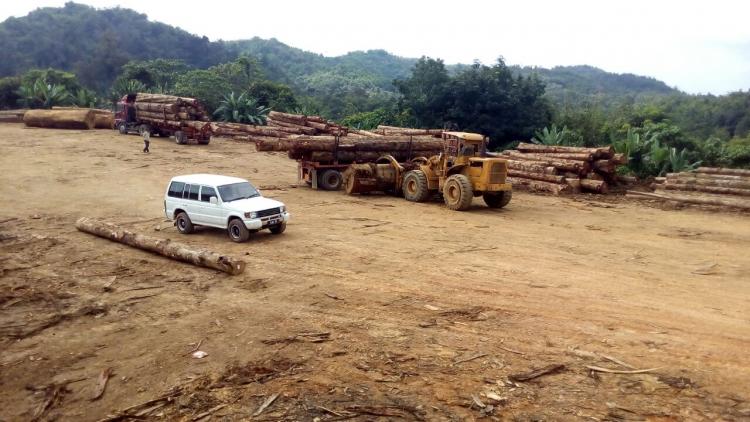 Full scale logging, destroying Malaysia’s unique environment against the wishes of the people

This scenario is exactly what happens when a government is preoccupied only by its own survival and is willing to bribe, threaten and break every rule in order to ensure it. For Najib, the actual job of governing, which is to ensure basic justice and protection for the people, has long ceased to be a priority. 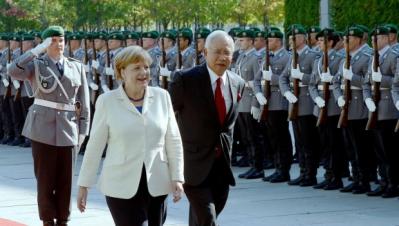 Selling more chainsaws? It is Germany’s shame that they have welcomed this kleptocrat to Berlin.

Instead, he is focussed on paying off his UMNO henchmen, so they keep supporting and protecting HIM.

Such corruption within the leadership quickly filters down, so that the smaller beasts will start looking for their own pickings, protected in the knowledge that the tainted man at the top can no longer move against their evil deeds.

Beneath them come the companies and thugs, who directly exploit vulnerable people like these landowners in Kelantan.  As for the police? They have long since learnt their role is not to uphold the law, but to service the criminal classes who are in charge – and take their cut.

This disgraceful incident is just one snapshot of the growing breakdown of law and order and exploitation of the weak that bad governance brings and which is now besetting West as well as East Malaysia.

But what does Najib care, if he can make some mega-trade deal to keep the Germans sweet?As for his wife? With an opportunity to shop in Europe, she will only have been troubled by the choice of colour of her latest hundred thousand dollar handbags.

Germany, meanwhile should keep a steady eye on their own banks and the danger that their involvement in corruption in Malaysia could fall under with widening spotlight of 1MDB, whose bankers included Deutsche Bank itself.