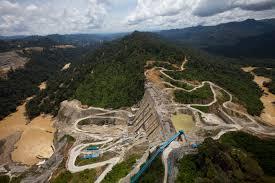 It is an irony that a country pledged to environmental and social integrity has wreaked so much misery and destruction in another country that is frankly a great deal more valuable to the planet than their own.

Norway is famously beautiful, but its northern climate limits its natural diversity, compared to the jungle jewel that was Sarawak/Sabah.

However, like Sarawak Norway has oil and its sovereign fund, though conserved for the national good, has invested over the years into some of the worst destroyers of Sarawak, such as the logging giant Samling and Taib Mahmud’s own family company CMSB. 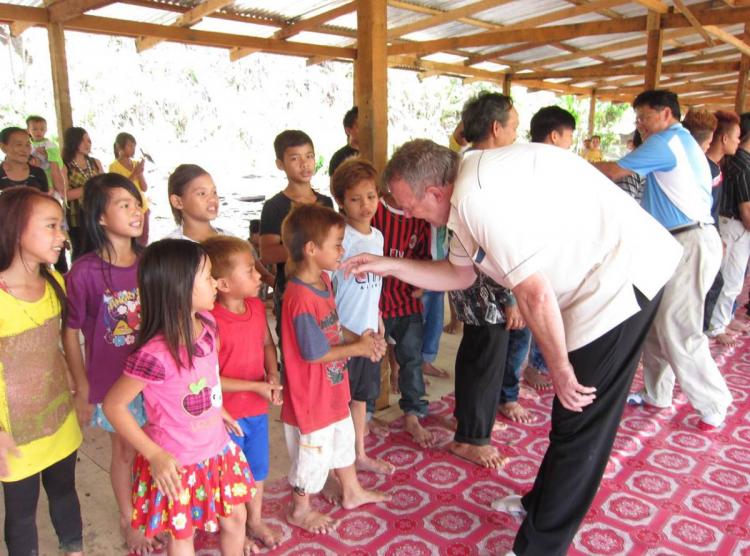 Trust me little children – I will make you all rich and happy once I have flooded your lands and sailed away – Sjotveit poses as the Savior of Sarawak, presenting his ‘Norway Dam Model’ as his symbol of progress – except there are no such mega-dams in Norway

Now, to complete Sarawak’s sad transformation from rainforest towards desertification, Norway has launched its deadliest export yet – the dam builder Torstein Dale Sjotveit together with a longboat-worth of his friends and relatives from back home, all on fabulous salaries that would cause consternation in the West, let alone Sarawak.

Torstein boasts the benefits of the modest sized dam that perches above his own modest home town in Norway, as if were some kind of model for the extraordinary environmental and social destruction he has wrought upon Sarawak – aiding a despot that no right-minded westerner should spend the time of day with, in return for his record million dollar salary.

Norway itself has rejected such mega-dams in favour of smaller projects, which are proven far more economical than the huge, destructive structures planned by Torstein Sjotveit for Sarawak. 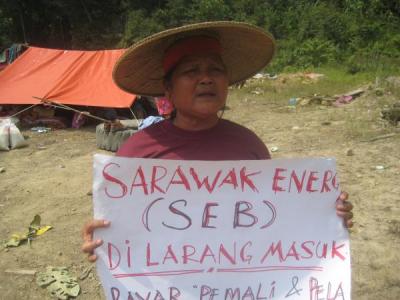 His first ‘SCORE’ dam project at Murum, as head of SEB (Sarawak Energy Board) came hard on the heels of Bakun, one of the great White Elephant projects of the world, which cost billions to build, destroyed a priceless tropical jungle and destroyed the lives of tens of thousands of displaced people, who still have yet to receive their proper compensation over a decade on.

As for all the promises of a ‘modern, progressive and prosperous existence’ take a trip to Sungai Asap were so many of those dam refugees still live.

Murum, which Torstein boasted as representing hope and progress for the Penan tribespeople is every bit as shameful, if not more so.

Torstein has brought tears to his own eyes telling the world how marvellously he was transforming the lives of the displaced Penan of Murum. Yet, in fact, these families were finally forced from their 77 day blockade against the dam only by rising waters. 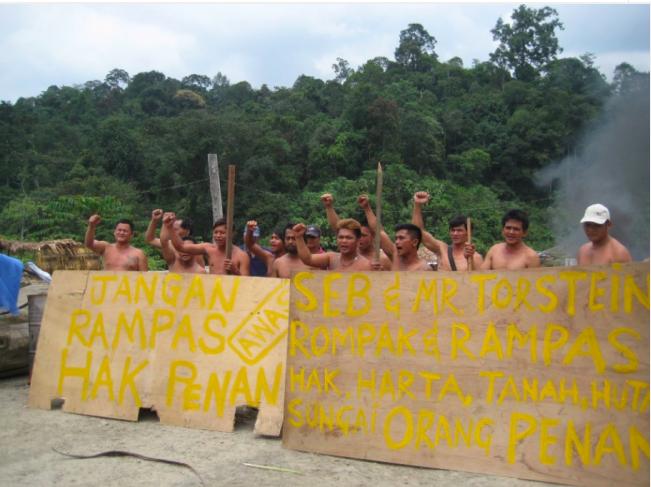 No one had properly consulted them or even informed them what was planned. Pushed into their ‘new model’ concrete longhouse villages these hunter gatherers are now living on pitiful handouts transported once a month from hundreds of miles away and subject to pilfering and short-change.

There have been water shortages, electricity is limited to just a few hours a day (despite the hydro-electric dam that shoved them from their homes a short distance away) and even crises of starvation as food supplies were interrupted. 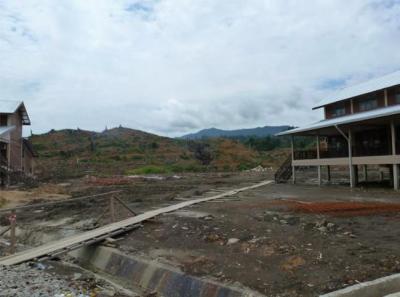 Welcome to your new home – time you learnt to farm. What SEB provided for the hunter gatherer Penan

So what about the promised wealth and compensation in return for the priceless timber and compared to the billions invested in the dam?

Each family receives only half the Sarawak poverty level income in cash – circa RM500 a month – due to run out in a couple more years.

Compare that to Torstein’s million dollar salary and ask who has really benefitted and progressed from the fruits of the Penan native lands?

Torstein has presided over the entirety of this human rights scandal, where the native people had no clue about even the miserable resettlement packages planned for them until Sarawak Report released the secret data just weeks before the impoundment of the dam, which itself had begun as a secret project, blasting out the jungle for a full two years before the rest of Sarawak had heard a single word about it. 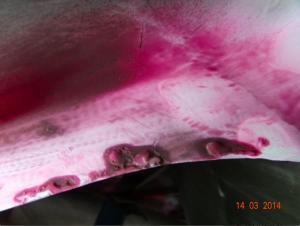 This ‘Norwegian expert’ has also presided over the catastrophic commissioning of faulty and extremely dangerous turbine engines, made in China, for Murum Dam, which he decided to install in the face of all professional caution and advice, having also attempted to keep the matter covered up.

Since Sarawak Report released the secret information about the shocking faults within Murum’s monster turbine blades, Sjotveit and his colleagues have attempted to ‘mend’ them in situ.  Experts say such manoeuvres are virtually impossible on site and the danger that these unbalanced blades will eventually wobble and shear and cause a catastrophic disaster within the turbine housings of the dam is very grave indeed.

Even more concerning under such circumstances is the fact that Murum sits above Bakun and is separated from that second highest dam wall in the world by a 70 mile gorge that would funnel any effluent from above straight into Bakun Lake.

Sarawak’s own impact assessments (also effectively kept secret until SR published the information) show that assessors were concerned that the danger of catastrophe of creating this further dam at Murum behind Bakun was “Extremely High”.

These assessors pointed out that the Murum Dam was built as an afterthought to Bakun, which was not therefore constructed to withhold the impact of the rushing tide of water from an upstream dam.

The concerns are not helped by the further information, obtained long ago by Sarawak Report, showing that major flaws in the construction of Bakun itself have undermined the integrity of the all-important concrete wall.

But, since Torstein is retiring next month and heading back to Norway (or maybe on to bring his benefits of progress to other corrupted countries) he plainly judges he will be safely out of the way in the event of any such unfortunate outcome due to hasty work and slip-shod management.

Its all about mega-money, of course 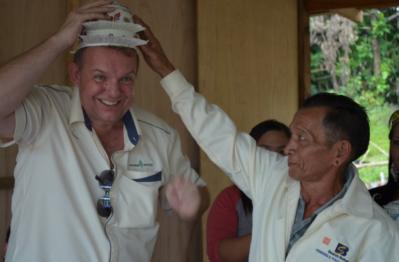 But, of course, none of this was ever about improving lives or bringing progress to local people.

Mega-projects are about channelling mega-sums into a limited number of mega-pockets, in this case Taib Mahmud’s, with suitable dedak to the likes of Torstein and other foreign and local helpers.

Billions have been borrowed on Sarawak’s future to build these constructions, which may never deliver on the ‘industrial progress’ envisaged by the Taib Mahmud ‘Master Plan’. But, those who are certain to benefit whilst the people of Sarawak are lumbered with repayments and interest rates for decades, will be the construction companies, cement monopolies and cable companies all now owned by the Taib family.

Taib and Torstein’s next project after Murum was of course the planned Baram Dam.  There were so many people affected by this dam that the revolt against it finally forced successor Adenan to move the plans to fight the state election.  However, the two years of ‘planning blight’ hanging over Baram as the natives blockaded the region for their lives, enabled all the logging hyenas of the state, including Samling itself, to move in on one of Sarawak’s priceless remaining natural regions and clear out all the valuable standing timber – hundreds of square miles of illegal logging in anticipation of the dam has left the region scarred and wrecked.

Now, the ‘modernisers’ have moved to Baleh – less people to block their plans, but plenty more vulnerable areas for the politically connected loggers to despoil.

So, what of this ‘industrial plan’ to improve the lives of Sarawakians?

Taib and his timber cronies first logged out the timber, destroying one of the lungs of the planet, millions of species and varieties of life of immense scientific value – most as yet undiscovered, let alone investigated.  That act wiped out much of the heritage of our planet in return for matchsticks, copy paper and packaging to benefit Taib Mahmud’s own bank account. 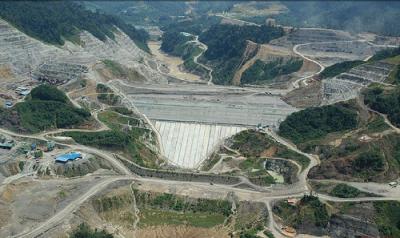 Once an unparalleled jungle and home to local people…

To work the vast oil palm plantations now placed on the shallow and fast eroding remaining earth, Taib and his successors are importing hundreds of thousands of foreign workers, most slaving under appalling conditions and under-cutting work for local people.

Now in this final stage of the old man’s Soviet-style ‘rapid modernisation plan’ no less than 12 dams are planned to plug up Sarawak’s wounded rivers, to create vast power supplies in the hope of attracting the dirtiest industries of the world to Sarawak’s shores, along with hundreds of thousands more foreign workers to service them, making one huge factory project to churn out wealth for the ruling families.

The truth is that this outdated vision is simply not working in terms of generating income. The investment simply is not needed and is creating a host of social and environmental issues that Sarawak does not need. Neither is it producing cheap electricity for those who want it and deserve it, the people of Sarawak.

However, in terms of steering borrowed money into Taib’s own bank accounts and into fat contracts and fat salaries for toadies like Torstein Dale Sjotveit, the SCORE programme has worked a treat.