Was It Some Bankers, Their Banks Or The Regulators Who Let Malaysia Down? 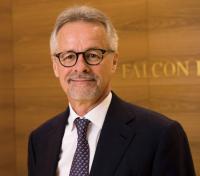 The metaphorical longhouse of 1MDB is gathering an impressive set of bankers’ skulls to hang up in the porch!

The latest head to roll is that of the former Goldman Sachs Swiss banker, Eduardo Leemann, who departed yesterday as CEO of Falcon Bank.

Naturally, as with all the rest, Mr Leemann and his bank have stated that the unexpected departure had nothing whatsoever to do with 1MDB. Indeed, Falcon yesterday announced that Leemann’s exit was long-planned since the very beginning of 2015:

“Eduardo Leemann informed the board (at the) beginning of 2015 that he wanted to retire from the operational management at the age of 60,” Chairman Murtadha M. al Hashmi said in a statement. [Reuters]

In which case, it seems a lamentable reflection on the bank’s basic organisational skills that today, almost two years after it received that notice, Leemann remains advertised on their website as the Chief Executive.

Even more indicative of a less than organised rearrangement of the bank’s affairs is the fact that still featured next to him, as the second most important public face of this private bank, is another chap who had already earlier departed in July. Chief Operating Officer Tobias Unger had been previously touted as Leemann’s Deputy and obvious successor, but took off to another job as storm clouds swirled over the Aabar-owned bank.

The man who has taken over at Falcon was only brought onto the Board last year and remains, according to the present website, as a Board Member and not top management.

The reality of course is that this confusion in the shop window is a mere reflection of what must be chaos behind the scenes at Falcon following the DOJ’s detailed disclosures of its deep involvement in the laundering of billions of dollars of 1MDB’s stolen cash.

The bank was taken over by Abu Dhabi’s Aabar/IPIC fund in 2009 under the initial Chairmanship of Aabar’s CEO Khadem Al Qubaisi, now arrested and under investigation in Abu Dhabi for massive fraud relating to 1MDB.

Khadem’s successor on the Board at the time of the 1MDB thefts was his close side-kick Mohamed al Husseiny, also named in the DOJ indictment and also under investigation by the US, Abu Dhabi and Switzerland for his role in the misappropriation of the funds. 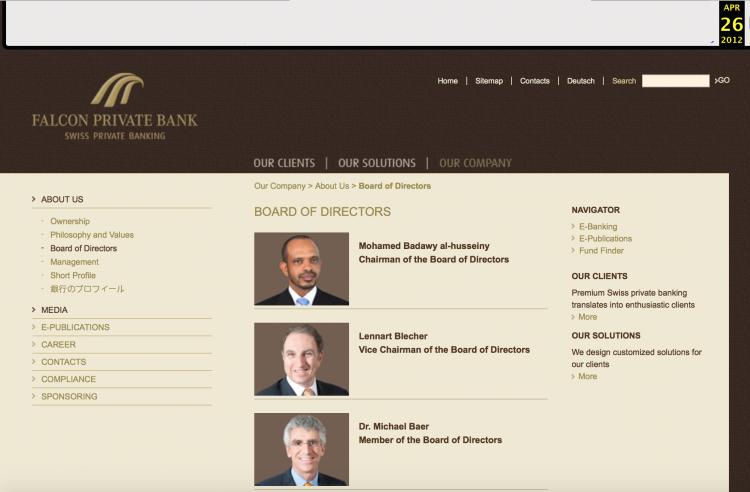 Al Husseiny helmed the Board of the bank right through the ‘Aabar/BVI’ phase of the 1MDB scan in 2012 and also through the ‘Tanore phase’ in March 2013, when huge sums were funnelled via the Falcon Bank Singapore account of Tanore Finance Corporation into Najib’s private KL account.

Straight after Najib recieved that money in March 2013 (just in advance of the general election) Al Husseiny resigned from the Board (in May 2013). The DOJ detailed millions of dollars in kickbacks he had received:

“Between approximately May 29, 2012, and December 3, 2012, Blackstone [funded by 1MDB] sent four separate wire transfers, totaling $55,000,000, to an account at BHF Bank in Frankfurt, Germany, held in the name of Rayan Inc. (“Rayan”)….HUSSEINY is the beneficial owner of the Rayan Account….

Then when crisis hit at Falcon, owing the the exposure over 1MDB and Aabar stepped in to take over 1MDB’s debts, Husseiny returned to the Board in April 2015, remaining until he was sacked from all Aabar/IPIC related posts in August.

Heading the management team through the entire period was Leemann.

Back in September of last year, long before Falcon was officially revealed as a key player in the laundering of Malaysia’s development money, Sarawak Report identified the Swiss branch of Falcon as the outfit which had facilitated the setting up of the off-shore company Tanore Finance Corporation, which had sent $681 million to Najib’s personal account.

Yet, as recently as March of this year Falcon’s then boss Leemann was still adamant the bank had “nothing to hide” over 1MDB:

Falcon Private Bank AG, owned by Abu Dhabi’s Aabar Investments PJSC, said it has nothing to hide from regulators probing possible financial irregularities at a Malaysian state investment fund and is cooperating fully with investigators.

“We are totally transparent, fully cooperative and there’s nothing to hide,” Falcon Chief Executive Officer Eduardo Leemann said Wednesday in an interview in Dubai, saying the bank’s business hasn’t been affected by the investigation. “We’re open as a book. That’s all I can say.” [Bloomberg]

Leemann was further quoted by the Wall Street Journal claiming the Aabar bosses on the Board had no influence whatsoever on his operational decisions at the bank:

On Wednesday, Falcon Private Bank’s chief executive, Eduardo Leemann, said the Zurich-based wealth-management firm operates independently from its Abu Dhabi owner and that the emirate plays only a minor role in helping it gain new business or clients.

“The owners, IPIC as well as Aabar, never until today, never have never had and never will get involved in any operational issues,” Mr. Leemann said. “It opened doors but no more than that,” he said. He made the comments at the inauguration of the bank’s new office in Dubai’s financial center.

Mr. Leemann said the bank suffered no impact from the association with the Malaysian scandal and that it has internal compliance mechanisms in place that have been audited internally, externally and by regulators.

“There’s a process about documenting each and every transaction we execute,” Mr. Leemann said. “It’s excess documentation, believe me, we have followed that process on all cases, and I’m not talking on 1MDB only,” he said.

Such talk was impossible to maintain once the July 20th DOJ court filing on asset seizures had been published to an astonished world.

That court filing shows in devastating detail how Falcon Bank was involved in the suspicious transfers of enormous sums of money linked to the activities of its Aabar Board members in both the two power purchase bond issues for 1MDB in 2012 (worth $3.5 billion) described as the Aabar/BVI phase of the scam.

It was already highly irregular that a small private bank should receive the full total of a multi-billion dollar state loan to take care of. But apparently Leemann’s due diligence then proceeded to fail to pick up that the outfit to which he was then immediately instructed to send on $1.4 billion of that money was a bogus company set up by his own bosses at the bank, Aabar Investments PJS BVI. 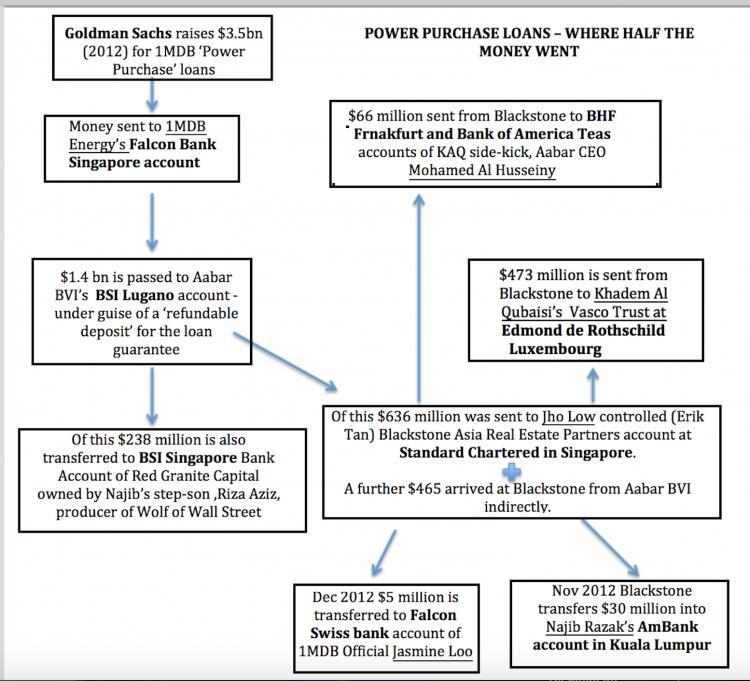 The Aabar/ BVI phase 2012 – Falcon transferred $1.4 billion from 1MDB to its bosses accounts at the bogus BVI company Aabar Investments PJS Limited. Failure of due dilligence?

In the next 2013 1MDB bond issue, called the ‘Tanore phase’ of the scam, Falcon played and even more obviously culpable role.

Tanore Finance Corporation was a shell company set up by the Singaporean Eric Tan, who was a known associate of Jho Low, a highly controversial and politically exposed associate of Najib Razak. Nevertheless, Falcon’s Singapore branch took on the account and assisted in setting up the offshore company registered in the BVI. 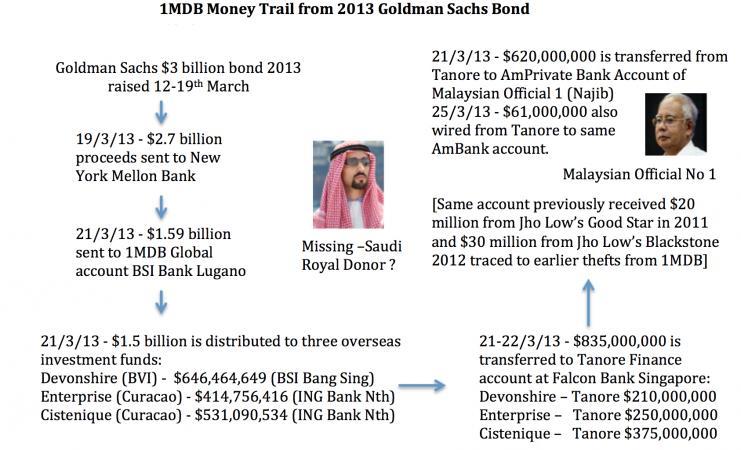 The bank then willingly received in the course of just 48 hours no less than three separate payments in Mid-March 2013 totalling a boggling $835,000,000 into this one Tanore Finance account.

A day later Falcon sent $620,000,000 of that straight on from this account to the Prime Minister of Malaysia’s account in Kuala Lumpur!

Presumably, Eduardo and his colleagues did not turn a hair that their cupboard sized branch in Singapore appeared to have acquired such a massively wealthy single client whose shell account received these enormous payments out of the blue and then transferred them on to the Prime Minister of Malaysia?

The ‘open book’ bank then obligingly followed up with a second payment from Tanore to Najib of $61,000,000 a couple of days later.

Eduardo Leemann has left his post and a bank which will have to deal with the regulators on this matter, alongside fellow institutions such as BSI, UBS, Goldman, ANZ/AmBank, Coutts, JP Morgan, Rothschild and others.

He, like the other former top players involved is likely to find that he is wanted for extensive questioning on these matters in an individual capacity, despite having retired from banking life.  Hanspeter Brunner, for example, has been denied exit from Singapore while the BSI investigation continues.

Yet is was this Swiss senior banker who not long before was quoted denouncing the idea of any further regulation of the banking system.  We quoted Leemann from an interview with the Abu Dhabi media saying he was “totally against more banking regulation”:

In fact, Leemann’s interpretation of the causes of the financial crash was of course self-serving and in opposition to what is widely agreed went wrong.

Inadequate regulation is what is widely recognised as having caused the failures of 2008. Illegal and irresponsible greedy bankers had broken all their own rules and guidelines in order to make a fast buck and lax oversight had let it happen.

Yet, over the following years more lax over-sight of banks such as Falcon had clearly allowed more illegal and irresponsible transfers to continue un-investigated, allowing global scams such as 1MDB to almost pass unnoticed.

The first enormous misappropriation of 1MDB money took place through the Zurich branch of RBS Coutts Zurich back in 2009.

Yet, nothing whatsoever had been done to investigate the matter right up until early 2015, when finally Xavier Justo released his devastating documents to Sarawak Report and Malaysia’s business paper The Edge, who both started reported on the scandal.

Either the banks did not raise the “Red Flag” money laundering alerts which ought to have been raised to central regulators in Malaysia, Switzerland, Britain and the United States as the interested parties in this particular transaction or the regulators concerned in all these countries simply failed to act.

The same applies to each and every other bloated, politically sensitive mega-1MDB transaction that occurred in ensuing years. Was it the banks who failed to notify the regulators in Singapore, Switzerland, Australia, America, Hong Kong and elsewhere or was it those regulators who failed to do their jobs?

The business media, meanwhile, did little more than muse over 1MDB’s banking irregularities. After all, who pays for them and all their adverts?

It is a huge relief for all Malaysians that at last this scandal has been addressed by all those forces. But, it well might not have been the case had the still imprisoned Xavier Justo not nailed his former bosses. 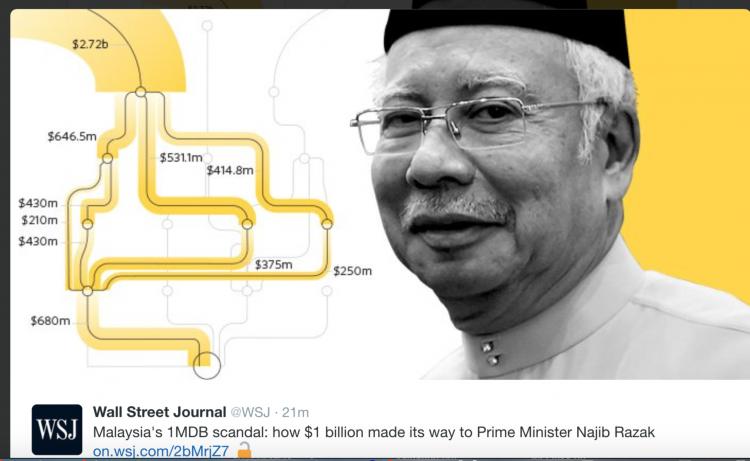 The intention behind the 1MDB money flows are illustrated by this WSJ chart showing the DOJ money trail, which was orchestrated by Malaysian Official 1, the man in sole charge of the fund,