"Don't Do As I Do, Do As I Say", DiCaprio Lectures Brits 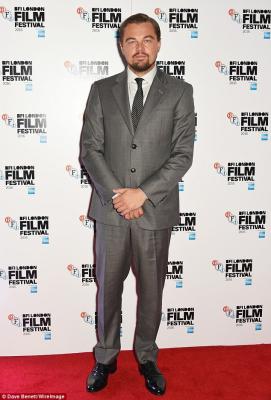 Leo poses as our global conscience

Leo DiCaprio dodged the expected ‘Red Carpet’ outside Leicester Square’s Odeon Cinema last night, preferring to creep in secretly round the back.

Meanwhile, the Malaysian-linked protestors out front, who brandished posters signalling the ‘Hollywood Actor One’s involvement in the 1MDB scandal were banned from entering the movie (to be followed by a Q&A Session), for which they had bought tickets.

The protestors wore masks of Najib Razak, depicted as having funded the Wolf of Wall Street through his step-son Riza Aziz, who produced the movie, from money stolen from 1MDB.

Say Sorry And Pay Back The Money

The growing campaign around this issue should have woken up DiCaprio finally to the fact that he now needs to say sorry for his behaviour related to the gas-guzzling, carbon-belching, gorging excesses of his crowd of friends, funded by 1MDB and pay back the money he earned from Wolf of Wall Street.

Otherwise, he must hand in his much vaunted role as Climate Change Ambassador for the UN and quit all this pretence. 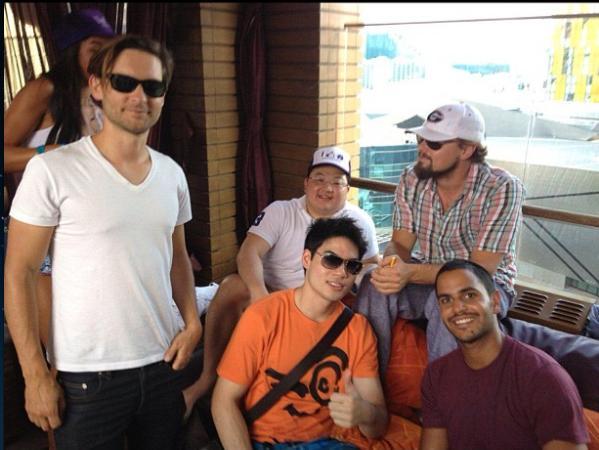 For more than two years Sarawak Report has highlighted DiCaprio’s willing participation in episodes of unbelievable excess and unparalleled waste of fossil fuels, funded by his friends Jho Low and Riza Aziz, and pointed out that this was money stolen by 1MDB.

There was no way that this actor and his team had not been alerted to the concerns over theft and the palm oil connections of his favourite hosts. 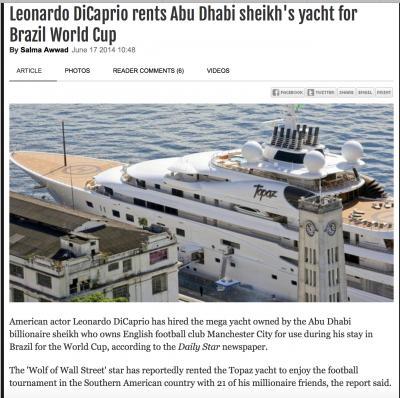 And for someone who chooses to lecture the rest of us about burning fossil fuels, his willingness to participate in excesses, particularly on a series of super-yachts, which are the single most gas-guzzling vehicle on the planet, is pretty sickening.

It was Leo who was guest of honour when Jho Low decided it would be a fab idea to hire a private jumbo jet, plus a further passenger jet (for overspill guests), in order that the crowd of hedonists could welcome in 2013 twice. First on a yacht in Sydney Harbour and then flying half the globe to Vegas to celebrate it coming in again.

Leo, who stands aloof from ordinary folk (like fellow actors on his sets) apparently liked nothing better than to party on and on with Jho Taek Low and his producer pal Riza. 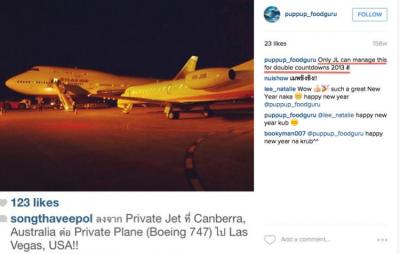 As early as 2013 Sarawak Reported  cited Hollywood sources, who said that Dicaprio was a regular guest of Jho’s Las Vegas jaunts, where the private jets, accommodation, food, all forms of  entertainment and even the gambling chips themselves were funded by Malaysian government connected pals.

The DOJ has now confirmed those jaunts were paid for by stolen 1MDB development fund money.

“On or about July 15, 2012, LOW withdrew an aggregate cash amount of $1,150,090 at the Venetian Casino: $500,000 as a withdrawal of deposit, and $650,090 as redemption of casino chips and other gaming instruments. Several individuals gambled with LOW on this occasion, using his account. These individuals included AZIZ; Red Granite Pictures co-founder McFarland; a lead actor in “The Wolf of Wall Street” (“Hollywood Actor 1”); and a former Chief Investment Officer of 1MDB. [Named as ‘Hollywood Actor 1″ by DOJ, Di Caprio is cited for gambling with stolen 1MDB money]

As long ago as 2013 Sarawak Report (in a series of articles much publicised in Hollywood at the time) had raised the worrying juxtaposition between the billions disappeared from 1MDB and the unexplained wealth of Jho and Riza, so close to the management of the fund themselves, since way back at the launch of Wolf of Wall Street, where Leo starred.

Receiving his Golden Globe for that film Sarawak Report noted that Leo had thanked Jho Low and Riza Aziz for “taking the risk” on the movie. We warned then that Leo was himself taking a risk by hanging out further in such a way with men who can’t explain their wealth.

Yet, as late as this past June, Sarawak Report was able to reveal that Leo continued to be a star invited guest to parties held by Riza at the Beverley Hills mansion, which has now been subject to a seizure order from the Department of Justice on the grounds of money laundering from 1MDB.

Leo DiCaprio was too grand to acknowledge the reports and warnings of this blog, despite the widespread reproduction in Hollywood media also. Instead, he accepted yet another starring role in a Red Granite Production, posing as America’s founding father George Washington. 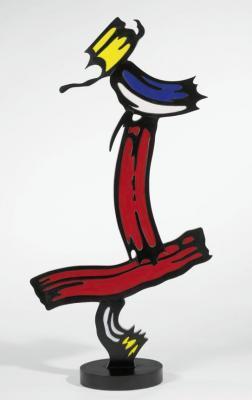 He also continued to accept huge donations to his eco-charity from Low and Co and presents like Marlon Brando’s former stolen Oscar purchased for him by Low for $600,000 (should he not also hand that back to the descendants of Marlon Brando who reported the object stolen years ago??).

Nevertheless, this jaded sybarite thought fit to step on stage last night and lecture others on how to tighten their own belts to save the world.

Whilst brave Sarawakians and Malaysia’s indigenous peoples are fighting timber corruption down on the ground, threatened by machete and chainsaw wielding thugs, Leo preferred to tell Westerners to stop buying palm oil products.

Palm Oil is produced on the space left AFTER the valuable tropical timber has been ripped out. Does Leo think that the raiders would leave the trees alone and forgo all the billions they can harvest if Westerners decide not to use the palm oil planted after?

In fact, does Leo really spend much time thinking between the parties?

More to the point, if Leo is so concerned about tropical deforestation (which certainly many are, including Sarawak Report) why has he made super-best-pals with the very pinnacle of the Malaysian Oil Palm elite, who have raided the jungles of that country, burned its oil and now planted oil palm for decades? 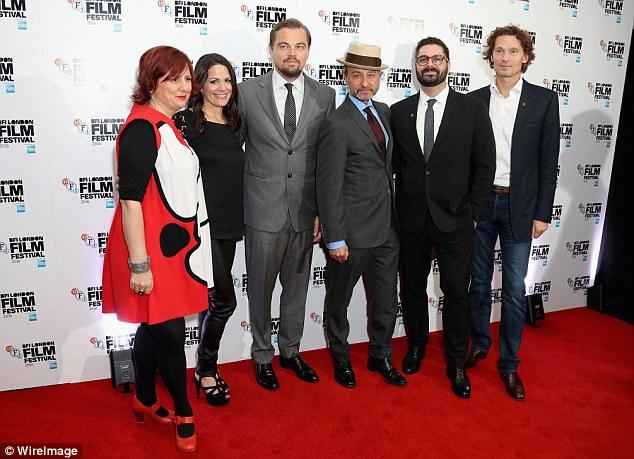 The Malaysian political hierarchy of BN are the single most destructive logging force on the entire planet, as any one who has studied the problem surely knows. In particular, Sarawak’s timber barons now threaten every other remaining timber region on earth and have propelled the palm oil phenomenon, not only in East Malaysia, in Kalimantan next door, but in Africa, South America and elsewhere.

Malaysia’s wealth and that of Malaysia’s governing elite is largely fuelled now by Palm Oil. If Riza was rich, surely Leo must have known, palm oil was in the equation somewhere? 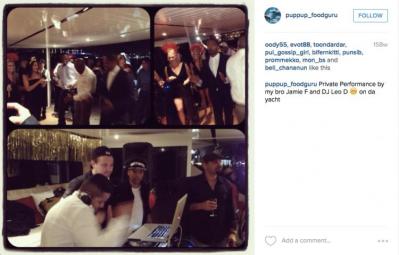 After all, Riza’s Step-Dad controls Sime Darby, the largest Oil Palm conglomerate in the entire world. Several of the other biggest global oil palm companies are Malaysian.

Yet, Leo took the party money and celebrated to the rafters, whilst telling the rest of us to stop eating digestive biscuits.

In fact, if Leo were to think deeper he would understand that Malaysia needs to sell its oil palm to keep its major income – and if the world stopped buying Malaysia’s biggest product that would harm the lives of people further and cause the money-making BN politicians to focus further on chopping down what timber is left to fill their coffers.

What actually needs to happen is that oil palm needs to be MANAGED for the greater good and not just for greedy individuals like Leo’s best pals from Malaysia’s top family.

Sober Up And Say Sorry!

If Leo really wants to change the world (and sure we would love his help) he needs to get sober and say sorry. 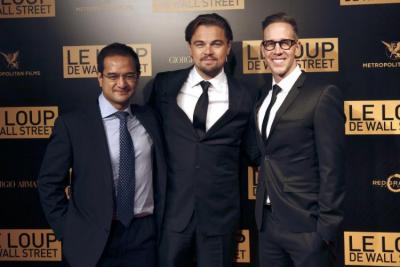 He needs to get brave too and tell it to his greedy, pillaging pals like Riza and Dad Najib, that theirs is no way to run a country.

The jungles should be conserved and former jungle areas should be restored and what oil palm plantations that do remain should be managed for the benefit of many and not the super-enrichment of a few – and to pay for Leo’s parties.

It means being rude to rich people and not succumbing to party bribes. Leo should tighten up his own belt before telling us to quit sweets and soaps. He should give the money back he received from 1MDB.

If you tot up the travel, parties, gambling chips, gas guzzling jets and yacht journeys, substances, payments for entertainments and all the rest, that would make a useful sum to support the anti-dam movement in Sarawak – SCORE (which is backed by 1MDB), which is due to destroy yet further jungle and create 12 more mega-carbon producing mega-dam lakes the world could definitely do without.

Do something really useful Leo or stop all this self-promotion!