PAGE 98 - What Is The Secret All About Prime Minister? 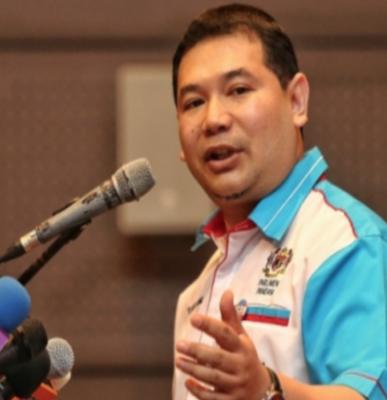 Rafizi Ramli MP, to be banged up for asking where 1MDB’s money went

An elected representative of the people has been sentenced to imprisonment for apparently referring to Page 98 of the Auditor General’s Report into 1MDB, which the Prime Minister had unconstitutionally declared an official secret.

Sarawak Report has uploaded the entire report already, so what Rafizi Ramli is referring to is known to anyone who cares to look and presumably all Malaysians are now having to get used to pretending they don’t know things they do.

Likewise, Malaysians are being threatened for mentioning what the United States Department of Justice has already confirmed, which is that billions of dollars have been stolen from 1MDB of which nearly a billion has been traced into Prime Minister Najib Razak’s own accounts.

If this was a lie then the Prime Minister would have sued Sarawak Report into bankruptsy in a British court a long time back, along with the Wall Street Journal and other news organisations which have long since reported the blatant facts. 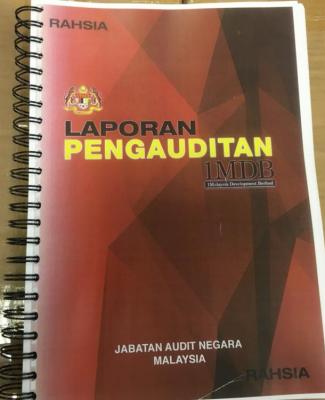 It is the fundamental point of Rafizi Ramli’s existence as an opposition MP that he is there to hold the Government to account and question issues of expenditure.

It is the duty of the government to justify those expenses by answering such questions.

That is the system in any sane and proper country governed by the rule of law.  Yet, to avoid such basic accountability, Najib has declared the audit into this public company secret (having commissioned it originally with the avowed purpose of putting the public mind at rest by getting to the truth over the running of the fund).

Rafizi had wanted to know why public money allocated to 1MDB, in particular RM288 referred to on Page 98, appears to have gone missing and also why a billion more had been allocated to 1MDB for the relocation of the military bases at Banda Malaysia, when the original deal (providing the land at a rock bottom price) had included an obligation to 1MDB to fund the move?

But, instead of providing a satisfactory answer, as ought surely to be expected, the government decided to go after Rafizi instead, saying that he had gleaned his information from the ‘secret’ pages of the Auditor General’s report – specifically Page 98.

Just to highlight the bovine and aggressive nonsense of this behaviour, Sarawak Report has provided a translation of the somewhat turgid Page 98 below. The original Malay remains available via the front page of our site.

Najib and his coterie are rapidly showing themselves to be incapable of running a civilised country or managing a modern economy. They have responded to being caught out on criminal behaviour by abandoning the rule of law and imprisoning all their critics.

Razak is a failed Prime Minister and he should do a deal and run before he turns Malaysia into a failed state:

4.4.5  According to 1MDB RE, the delayed payment to PPHM up until the date of the meeting, was estimated at RM350 million. The board of directors at the meeting on 17th August 2015 asked Mr Azmi (Chief Financial Officer for 1MDB) to explain what the amount of RM288 million was used for by 1MDB. Up until September 2015, JAN found that this matter was not fully explained to the 1MDB board of directors.

4.4.6 Checks by JAN regarding the Declaration of Interim Payments to PPHM found that 50 declarations that were claimed for development costs of 5 relocation projects ie RMAF Subang, RMAF Sendayan, RMAF Subang, Royal Artillery Regimen 31 Camp in Kajang and RMAF Kelantan that was put on hold between December 2014 and September 2015 (Declarations 17 to 26). The amount of delayed payments to PPHM up until September 2015 was RM396.41 million.

4.4.7 This situation showed that 1MDB RE was experiencing problems with paying the relocation contractor involved in the project  although RM288 million had been allocated by the government for this specific purpose but was instead used by 1MDB for undisclosed expenses, the nature of which remain unknown to the 1MDB Board of Directors.

Response from the 1MDB Management dated 9th December 2015 that explains that RM288 million was used to service the interest on a loan in order to meet the overall financial needs of the 1MDB Group.

4.5.1 1MDB RE received the resources to finance the relocation project PUKL, Sungai Besi through two loans and 1 terbitan sukuk. The 2 loans were received by the Social Welfare Body PERSEKO and Ambank Berhand (each received RM800 and RM550 respectively).

4.5.2 The allocation of the sum of RM880 to PERSEKO was approved by the 1MDB Board of Directors on the 24th of April 2012. The loan agreement signed on the 28th of September 2012, with a yearly interest rate for 10 years of MGS+0.5%, to mature on the 10th of October 2022. The purpose of the loan was to finance the relocation and installation of facilities for the Military Camp at Sungai Besi to make way for the development project Malaysia City (Bandar Malaysia) and/or for other land/property investment. The Federal Government signed an agreement to support this loan on 28th Sept 2009 and the agreement was signed between the Finance Minister II (Government representative) and PERSEKO. 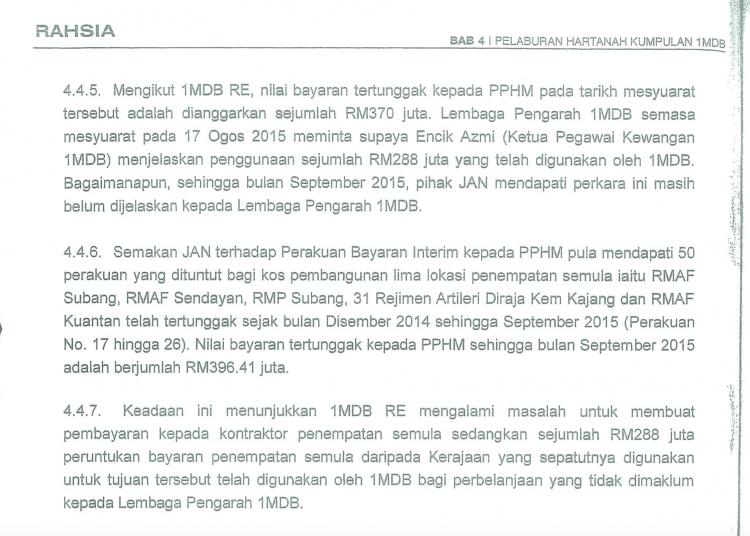 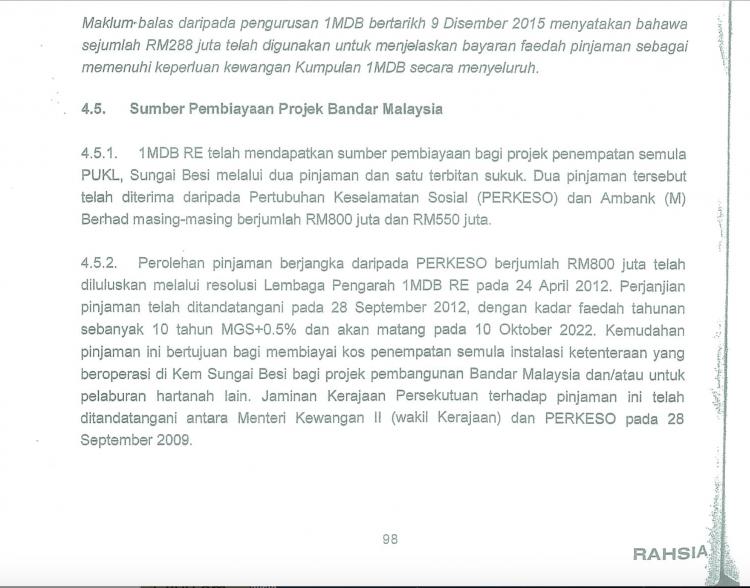 Below – How Rafizi’s concerns referred to on Pg 98 were originally reported in January: 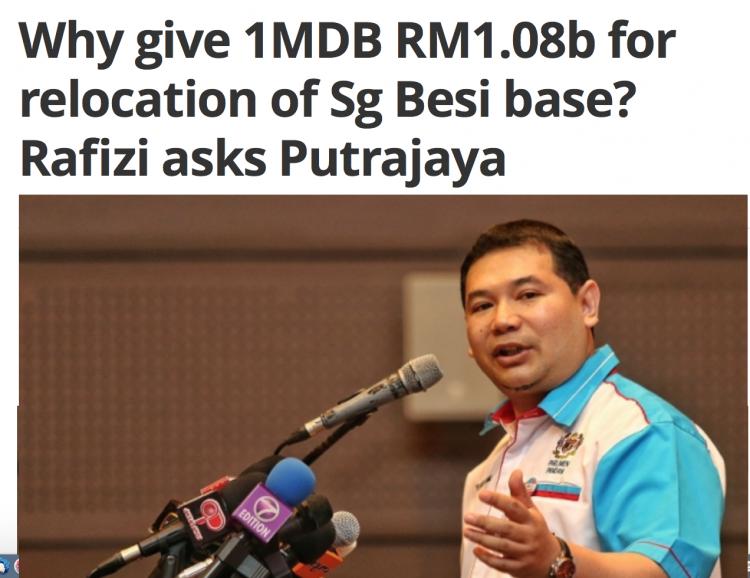 [Malaysian Mail] The government must explain why it gave 1Malaysia Development Berhad (1MDB) a RM1.0865 billion grant to relocate and upgrade the Sungai Besi military airbase as it is the state investment fund’s responsibility to bear the costs of the operation, PKR’s Rafizi Ramli said today.

Rafizi said the 2014 Auditor-General’s report showed that 1MDB was given the grant for the purpose of “building a replacement building and obtaining equipment for the redevelopment of Sungai Besi.”

“Why did the federal government approve the grant to 1MDB to finance a part of the operations when it is the financial responsibility of 1MDB according to its agreement with the federal government in exchange for obtaining the Sungai Besi military airbase lands for a low price?” the Pandan MP asked in a statement.

Rafizi said since 1MDB recently stated RM800 million had been paid to the contractor in charge for upgrading the military airbase, it must explain what has happened to remaining RM286.5 million of the grant given by the government.

“Even worse is that based on these figures, it is clear that the funds obtained by 1MDB through the issuance of sukuk (Islamic bonds) of RM2.4 billion and the federal government grant amounting to RM1.0865 billion (which in total amounts to RM3.4865 billion) is much more than the costs for the entire project set at RM2.7 billion.

“Till this day, 1MDB has not explained where is the remainder of the funds from the issuance of the RM2.4 billion sukuk bonds which was supposed to have been used to finance the relocation and upgrading works of the airbases,” he added.

On Tuesday, 1MDB said RM800 million of the sum was used to cover the costs for the relocation of military bases as part of its undertaking to develop Bandar Malaysia, while the rest was for fees of issuing the bonds and capital expenditure of its real estate.

1MDB, as part of its rationalisation programme, had sold off parts of the land in Tun Razak Exchange and also a 60 per cent stake in Bandar Malaysia to a Chinese consortium led by China-owned Chinese Railway Express Corporation Limited (CREC) for RM7.41 billion.

Part of the deal includes transferring remaining liabilities 1MDB has in Bandar Malaysia, which includes the relocation of military bases and the liability of the sukuk bonds raised for the relocation.