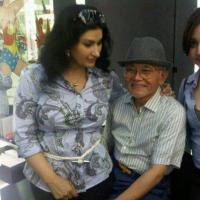 What would a wise and heavenly judge mete out as punishment to a man, who had desecrated Paradise and left its people’s destitute to fuel his own greed and power?

Would they strike him down with some cruel disease like cancer? Or arrange for him to be arrested, tried and jailed: his assets confiscated?

Or might they rescue this man from death only to subject him to an even more sobering, troubling and lengthy ordeal as he begins to realise that all he lusted for must turn to dust, like he himself?  Might they condemn this selfish monster to a prolonged taste of his own medicine, as the target of another being every bit as selfish and greedy as himself, in order to torment him as he reaches out for help, love and respect in his old age?

In which case, Governor Taib Mahmud has finally met a subtle and divine justice in the form of his increasingly powerful and domineering much younger wife Ragad.

Sarawak Report has now received extensive evidence about the situation in which Sarawak’s ageing Governor now finds himself, as the victim of an arranged marriage to a serial exploiter, who counts openly together with her family members, the days until her hated husband dies.

Syrian born Ragad makes her curses in Arabic to her husband’s face, not just once a day but several times, as her secret joke with her surrounding family members, because he cannot understand her language.  Unfortunately for her, there are others too who understand her words (unbeknown to her) and who have testified to Sarawak Report the shocking situation where a wife hands her husband a drink with such words as: 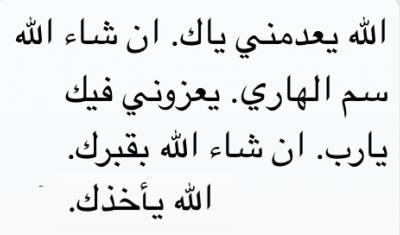 Deadly curses heard said by Ragad, according to Arabic speakers who informed SR

“She says these things whilst rolling her eyes lovingly and smiling sweetly, as she hands something for her husband to take to eat or drink“, shocked onlookers have confided to Sarawak Report.  “It is for her to vent her own fury and to amuse her mother and sister, who have ensconsed themselves in the home, which Taib plainly hates”.

Ragad was introduced to Taib through a marriage broker, whom she had used once before, thanks to enquiries made by Taib Mahmud’s sister Ragad and her Lebanese husband Robert Geneid. Taib was about to run for election once more in 2011 at an advanced age after three decades already in power and it was felt he needed a wife. 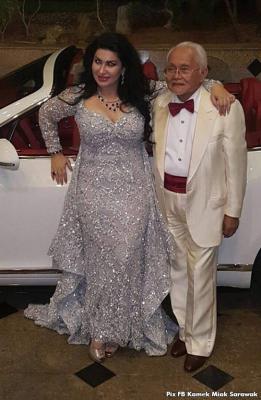 Getting what she can, but she wants security from the will….

Ragad paid 800,000 Rials (US$200,000) to the Saudi broker, nearly the entire settlement obtained from her divorce from her previous husband just two weeks before.  The agreement was in anticipation of the vast wealth of the man to whom she was being introduced, but had not yet met.

Taib was not informed that his 30 year old bride had already been twice married and had two children from her first marriage. The entire arrangement was a family enterprise organised by Ragad’s mother and is treated as such, say insiders: “They are all after their cut”.

The couple had not even met before they performed an Islamic marriage in Saudi Arabia. Two weeks later they had a wedding in Damascus and it was only a month after that people back home in Sarawak (where Taib made all his money) were treated to the information that their Chief Minister had married and a surprise ceremony was also performed there.

Keep your eyes on the prize!

“Ragad was repulsed by her elderly spouse on sight, quite understandably” one insider told Sarawak Report in an extensive interview, explaining that she had originally understood it was the Sultan of Brunei she was to be spliced with, who looked young and fanciable enough. “She was disgusted when she realised who it actually was, but her mother was firm. She said “keep your eyes on the prize” and eventually Ragad forced herself to agree to full conjugal relations, as Taib was threatening divorce if not”.

It is in many ways a sad and tragic story.  A wealthy old man looking for comfort in his old age has ended up with a woman who wishes him dead as soon as possible, so she can collect on her duties.

Ragad has widely discussed the ‘good news’ with associates, which is that Taib has already survived a serious bout of cancer and is not expected to live too much longer. She and her family are waiting on a recurrence of his disease, in the anticipation that he will die sooner rather than later.

However, whilst one might sympathise with such an awful predicament for a poorly old man, is that not the penalty he has paid for his own illicit wealth, his disregard for others and his vain and greedy decision to buy himself a young woman for his old age?  How could she have possibly have married him for anything else but his money and therefore why would her attitude be any different from this?

“Ragad soon discovered that Taib had put all his affairs in order and left everything to his four children when he was ill before” Sarawak Report has been told. “So, Ragad has been pressuring to secure herself a large settlement since there is no love lost between her and those off-spring. In fact, they are very jealous and hate her”

So, not only is Taib beleaguered with a gold-digging wife, who makes fun of him and curses him, but he is surrounded by greedy, sullen and resentful heirs who hate the person he lives with and are scrapping to get all of his money stolen from the people.  Again it is a clear penalty of illicit wealth and selfish greed, that little of the normal kindness and charity within families of more modest means features in the interactions of this rapacious ‘first family of Sarawak’.

Ragad is desperate to get pregnant to secure her cash

Ragad has been working to secure her position by falling pregnant, insiders have confirmed. However, three miscarriages have indicated what was feared, which is that chemo-therapy and age have diminished the chances of a natural child. “She has been trying to get him to go to the doctor, so they can have treatment, but he doesn’t want more children. He has accepted to take in her two already, even though he didn’t know they existed when they married. He is refusing and she is furious. She needs a child to secure her chunk of his money when he dies”.

Sarawak Report is sorry to have to impart such information, which would be private under ordinary circumstances.  However, what the Taib family are fighting over is wealth that has been stolen from the State and its people. Now that a foreign born woman and all her family have also dug themselves into the situation, all this enormous financial wealth, taken from the natural resources of the country, could be removed entirely from the jurisdiction of Malaysia and into the hands of a greedy adventuress and her distant Middle Eastern family. This makes it of public interest.

Ragad has already secured massive sums handed to her by her husband and he has promised her a home and allowance when he dies. But, people say that she and her mother and sister and brother are anxious to make much more from their advantageous match.

“They are determined to bring him under their power. They have a long history of using black magic and they are trying it out on him. She inserts bodily fluids into his drinks, this is one method”

explained one insider, who described the practices, which are too disgusting to write about in detail.

Black magic aside, Taib, who is now 80 years old is vulnerable to his far younger, larger and stronger wife, thus turning the tables on a man who was once able to bully others and did so.  “He began by showing jealously and trying to force her to stay at home and do as he wished, but these days she just does as she wants. She goes out to all hours when they are abroad as well. If he protests there are furious rows and she has a habit of taking valuables and destroying them in front of him. She is stronger than him.”

Taib used to be guarded by a long-standing secretary, who was loyal only to him:

“She sorted that. First she got him sacked and then allowed him back his job only if she does everything through her. So every call and every caller, it is now monitored and controlled by Ragad and that includes the family.  The balance of power has definitely been changing in that household over the past couple of years as he just gives up and gets frailer”.

There is a view that if Ragad cannot have her way with a child, she will use her proximity and growing influence over her now fading husband to secure the level of wealth through his will at some stage.

Taib is mean and acquisitive and it is likely he will fight to protect his wealth for his family till the end. Two greedy and tenacious characters are now locked together and fighting for the spoils of Taib’s rape of Sarawak.  But for what benefit? What pleasure and comfort? 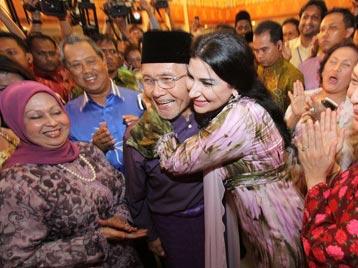 Great shows for the camera…. but Ragad cannot resist constantly abusing her husband verbally to his face in a language he cannot understand..

Taib has bought a jet, which he has put to one side for his retirement (to be presented back to him by the State of Sarawak). But how much spending and extravagance can bring solace to an old man, who like a child only needs genuine love and regard to make the difference to his final years?

As this Thief Minister is finding out far too late, the most important things in life are the things that money cannot buy. In fact, too much money destroys these things.

So, maybe there has been an act of justice here and some celestial being has ensured ‘karma’ for Mr Taib or maybe it is just the inevitable outcome of life. It seems to have been his lot to have retained enough time on earth to be done by as he did; to belatedly discover the difference between what matters and what does not and to realise that he worked all his life to obtain the latter at everyone else’s expense.

This old man in his guilded cage may soon start to wish he could escape what he has brought upon his own head. In which case he should succumb to his own poison sooner rather than later.