Falcon Bank’s Jans Sturzeneggar – to plead guilty on all charges

Najib’s spin-masters will now be forced to add the Government of Singapore to its bizarre list of ‘international conspirators’, who are allegedly seeking to topple him.

This follows today’s court developments in Singapore, where prosecutors specifically and repeatedly referred to the March 2013 transfer of $1.2 billion into the Falcon Bank account of Tanore Finance Corporation as being “suspicious”.

$681 million of this suspicious money was within hours passed into Najib’s AmBank account in KL.

Najib’s excuse that the money was a genuine donation from a Saudi Royal is not dignified with any mention from the Singapore authorities, since there is no evidence for it.

Instead, the Swiss Falcon Bank Manager Jans Sturzenegger has been charged with 16 counts of money laundering, including his failure to report the suspicious money that entered Tanore’s account number 855029901 21st-25th March 2013, which was then passed into Najib’s private account. 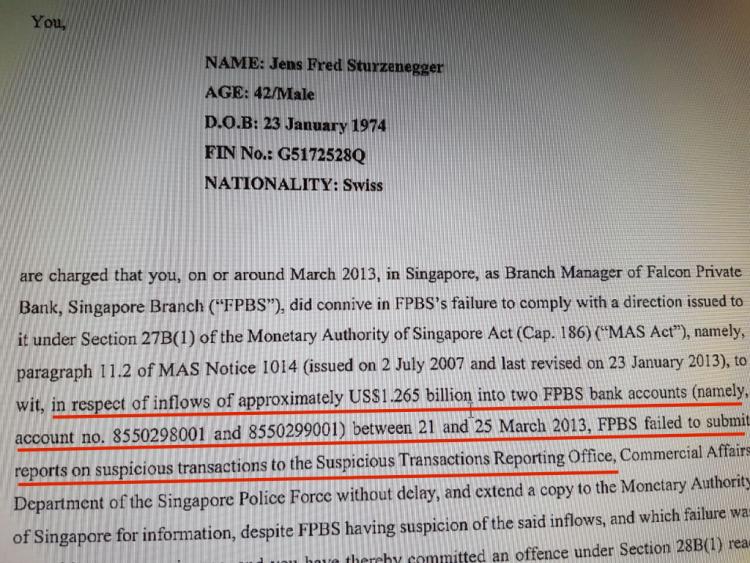 Damningly, Sturzenegger’s lawyer today confirmed that his client plans to plead guilty on all charges, meaning that Najib will also have to add his former collaborators from Falcon Bank to his burgeoning list of ‘plotters’ against him.

This guilty plea matches evidence from the US Department of Justice court filings, which specifically say that Falcon Bank staff were on record expressing concerns about the huge payments that were forwarded from 1MDB, through Tanore and on to Najib, but that they were over-ruled by the hierarchy of the Bank.

The rest of the 16 charges against Sturzenegger focus on a highly interesting matter, namely his admitted attempts to mislead Singapore investigators about the role of Jho Low in these transactions.

Time and again the Falcon local manager is accused of having lied, in order to obscure and deny Jho Low’s control of the accounts in question.  Charge 11 accuses him of lying to say he didn’t know Low, when in fact he did: 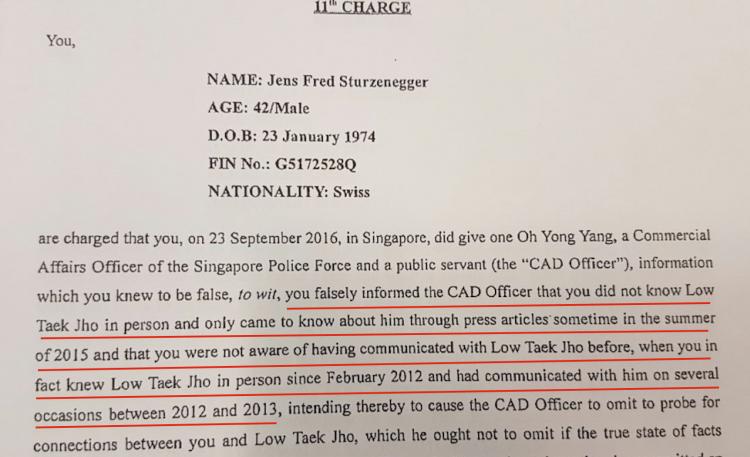 Sturzenegger had denied he knew Low, whereas in fact he had regularly communicated with him from the start of 1MDB’s involvements with Aabar (owner of Falcon Bank)

Charge 12 accuses Sturzeneggar of lying to investigators that he did not know the connections between Jho Low and Eric Tan, the individual who was recorded as being the beneficial owner of the four relevant accounts at Falcon Bank.

In fact, it was Jho Low who was orchestrating these accounts, say the prosecutors in this charge, which the Swiss bank manager has now admitted to. 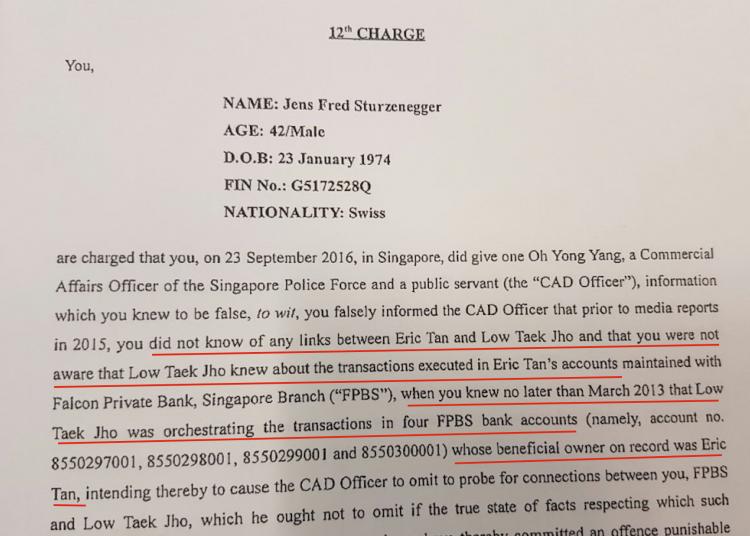 Pretended not to know the links between Jho Low and Eric Tan or to know that it was Jho who orchestrated the accounts, which were recorded as being beneficially owned by Tan

Then things get even more intriguing with a separate 7th charge where prosecutors reveal that Sturzenegger was knowingly communicating with Jho Low through an email that Jho was using in the name of Eric Tan! 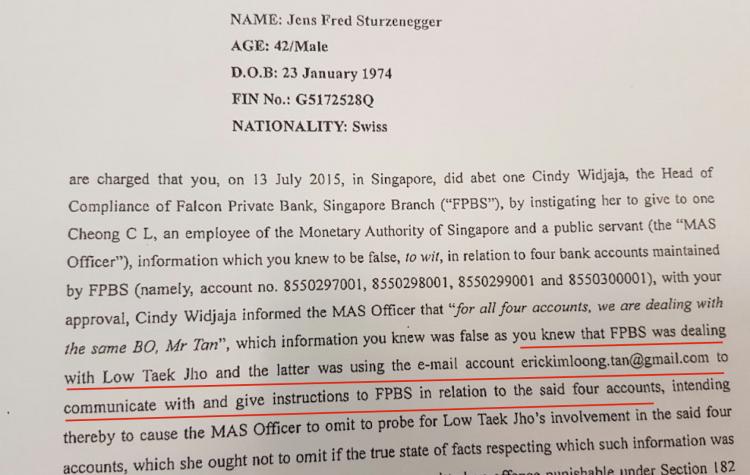 Jho Low was using an email in the actual name of Eric Tan!

By admitting to this charge also, the Swiss banker is making clear that he knew that Jho Low was controlling the accounts that were held in the name of Eric Tan and that it was Jho Low that he was actually communicating with when he received emails from an [email protected]! 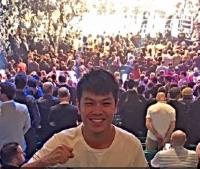 Banker Yeo Jiawei visibly enjoyed the high life, but were was Eric Tan?

At which point, observers might start to wonder who this Eric Tan actually is?

Has anyone met this person, whom the DOJ repeatedly described as “an associate of Jho Low” and beneficial owner of numerous accounts linked to the laundering of money from 1MDB and the purchase of art works in the United States?

The faces of Jho Low’s other associates like Seet Li Lin and Yeo Jiawei have all appeared in the partying pictures of Low’s fun-loving crowd, but not ever Eric Tan.  It gets more bewildering.  Two further charges accuse Sturzenegger of lying to investigators by saying that he met Eric Tan on two occasions, when in fact the man he met both times was Jho Low. 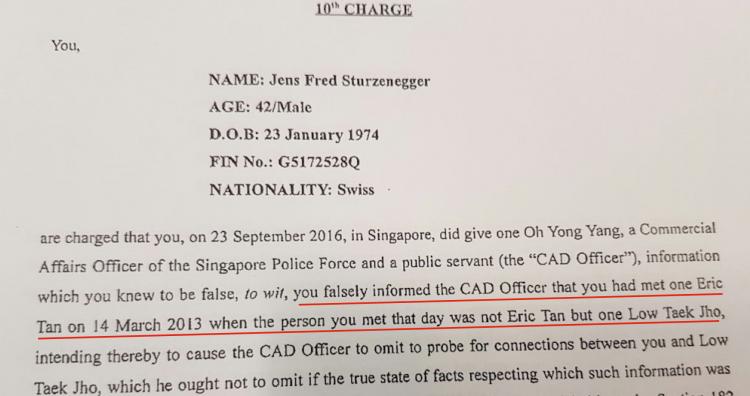 Two days after Najib launched the rushed bond issue in March 2013 for 1MDB, Jho Low met the Falcon Bank boss in Singapore who passed the money on to Najib

Charge 10 (above) refers to a pivotal meeting just after Najib signed the so-called ‘Strategic Partnership’ with Aabar on March 12th 2013, which launched the rushed bond issue by Goldman Sachs to raise $3 billion.

On March 14th Jho had travelled from acting behind the scenes at that signing in KL (where he was snapped hovering behind his key contact, the PM’s wife Rosmah Mansor) over to Singapore to meet local Falcon boss Sturzenegger, according to this charge.

It was just a week after that meeting, 21-25th March, when that money raised by Goldman was rushed into the Falcon Bank Tanore account (supposedly owned by Eric Tan, but orchestrated by Jho Low) and on to Najib’s account in KL.

The assumption has to be that the March 14th meeting with the Falcon boss was therefore connected to that transfer of $681 million into Najib’s account, which Sturzenegger now admits he should have reported for being suspicious.

There is a further such meeting detailed in Charge 14.  This was earlier in 2012, but at an equally pivotal period with respect to transfers from 1MDB to Najib and his collaborators. This meeting and a later phone call took place in early February 2012, shortly before the first of two power purchase bond issues by 1MDB.

All the money raised in those deals (a cool $3.5 billion in total) was initially sent by Goldman Sachs to 1MDB’s Falcon Bank account in Singapore. It was a huge transaction for such a tiny bank.  Again Sturzenegger admits he lied about this crucial 2012 meeting and at first told investigators that the man he met was Eric Tan. 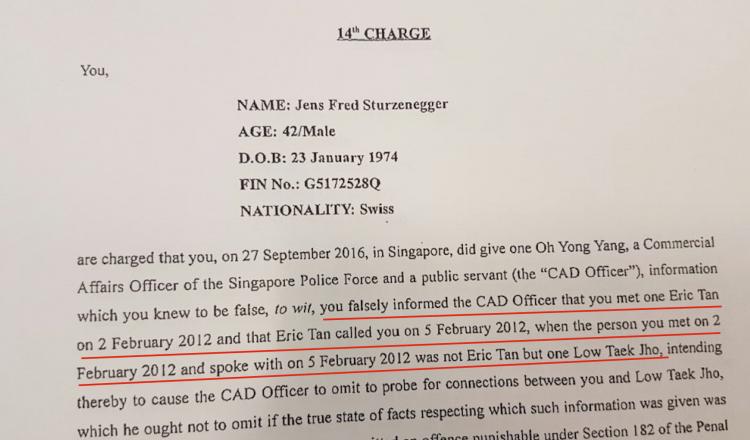 Charge 14 details a further meeting just before the first power purchase loan is raised for 1MDB – the money also went through Falcon.

So, what explains Mr Sturzenegger’s willingness to deal with Jho Low instead of the actual account holder Eric Tan?

Clearly, the Falcon boss was complicit in the use of a nominee and it would seem that Mr Tan is a very shadowy entity indeed. Unlike the rest of Jho Low’s young and party loving entourage of little helpers, Mr Tan, described as a Malaysian citizen by the DOJ, has appeared nowhere and his low key existence seems to lend little more than a name to activities managed by Jho Low.

On the other hand, consider how highly trusted this fellow Tan must be. It is Eric Tan who received beneficial ownership of multi-billion ringgit accounts, such as Tanore and Grafton at Falcon Bank and Blackstone Asia Real Estate Partners at Standard Chartered Bank, which formed the centre of Low’s operations handling 1MDB’s stolen money.

Would Jho Low or Najib feel comfortable with just anyone in that role?

Could Eric Tan be a fake ID for Jho Low?

Sometimes Malaysian crooks will use unwitting kampung folk to front companies that they themselves own.  However, Eric Tan’s name was on the bank accounts, giving him unquestioned access to hundreds of millions of dollars.

So could it possibly be that Eric Tan and Jho Low are in fact one and the same – a mask behind which Jho could conduct more sensitive business such as the laundering of 1MDB’s stolen billions?

If not, it is high time this mystery billionaire shows his face or faces a warrant of arrest from Singapore (at the same time as Jho Low himself).

Good Star had just received $700 million siphoned out of the 1MDB investment, of which $85 million was also sent on to Obaid.

Add the $20 million sent to Obaid from Eric Tan (from yet another company registered to Tan called Acme Time) to the $85 million sent by Good Star on the same day and it totals a very neat 15% of the stolen $700 million, which makes for quite a coincidence.

The letter from ‘Eric’ was not signed

Likewise, according to the FBI investigators in New York, Eric Tan and Jho Low had a very symbiotic relationship when it came to dealing with art houses, where the bosses clearly knew that Jho was hiding behind Tan in his purchases and was desperate to leave his actual name out of the deals. 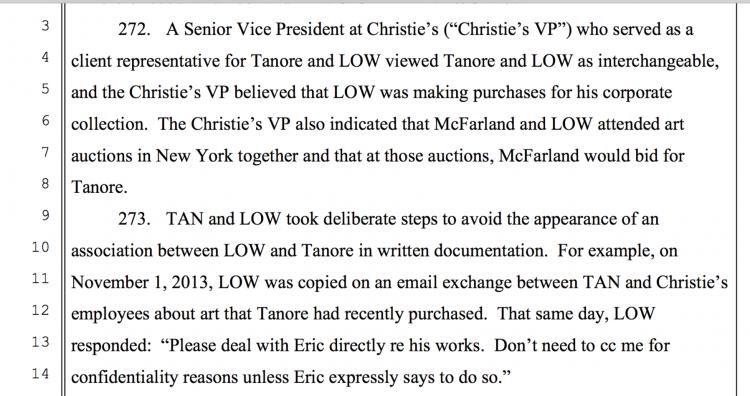 Jho Low objected when Christies copied him into an email to Eric Tan…. maybe he didn’t need to receive it twice?

In an internal email dated December 9, 2013, with the subject line “Tanore,” the Christie’s VP directed another Christie’s employee to “send an email” to Tanore about its continued failure to make payment for the art purchased on November 5 and to “please CC Jho even though he does not like it.” [DOJ court filing par 276]

Maybe, it was not just that Jho Low was being secretive. Perhaps he just didn’t like being copied twice?