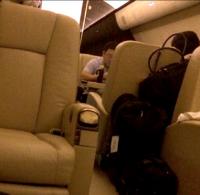 The Bombadier Global 5000 private jet, purchased by fugitive tycoon Jho Low with money stolen from Malaysia’s 1MDB development fund is confirmed as having been seized in Singapore.

It was reported in online blogs over the past few hours that the jet has been grounded for the past two weeks  (above) at Selatar Airport and the details match those of the wanted vehicle.

There is a red notice pasted across its door, implying that the vehicle has been impounded by the authorities.

The United States Department of Justice issued a seizure order on the jet last July, in a court filing that listed over a billion dollars of assets, which it said had been purchased by Low and his collaborators using the stolen money.

A total of $7 billion has gone missing from the fund, according to Malaysia’s Auditor General and numerous other financial regulators, although the man in charge, Finance Minister Najib Razak, denies this to be the case.

According to the DOJ filing, the United States authorities claim  “All right and title to Bombardier Global 5000 aircraft bearing manufacturer serial number 9265 and registration number N689WM, with two Rolls Royce engines bearing manufacturer’s serial numbers 12487 and 12488 (“BOMBADIER JET”), including all appurtenances, improvements, and attachments thereon, all aircraft logbooks, and all leases, rents, and profits derived therefrom” on the grounds that it was purchased with the proceeds of money laundering in the United States.

The filing then continues in clear and concise terms to detail over several paragraphs, how Jho Low used the money he had stolen from 1MDB to buy the jet for a total of $35 million:

333. An aircraft bill of sale dated March 31, 2010, was executed transferring title and ownership of the BOMBARDIER JET from J.T. Aviation Corp. to Wells Fargo

Bank Northwest in its capacity as “owner trustee” of a trust created by Wynton Aviation (Global 5000) Ltd. (hereinafter, “Wynton Aviation”). Wynton Aviation was incorporated in the British Virgin Islands on or about December 30, 2009.

334. On or about December 31, 2009, J.T. Aviation Corp. and Wynton Aviation executed a purchase agreement to sell the BOMBARDIER JET to Wynton Aviation less than three months after the $700 million wire transfer was executed.

335. At the time of the purchase, the BOMBARDIER JET bore FAA Registration Number N501JT and its beneficial owner was J.T. Aviation Corp.’s president.

336. Wells Fargo records indicate that Wynton Aviation is a holding company owned by LOW. According to these records, LOW is this entity’s sole beneficial owner, controlling party, and legal owner.

339. On or about December 31, 2009, the same day the purchase agreement for the sale of the BOMBARDIER JET was executed, a wire for approximately $7 million was sent from the Shearman IOLA Account to an escrow account maintained by Crowe at Bank of Oklahoma in the name of Crowe and Dunlevy Aircraft Escrow I (“Crowe Aircraft Escrow Account”). Internal Shearman records show that the $7,000,000 transfer was linked to an internal Shearman account held for client 36853 (The Wynton Group) and matter 4 (Park Laurel).

340. On or about March 26, 2010, Wynton Aviation and Wells Fargo Bank Northwest, N.A. (“Wells Fargo”) entered into a trust agreement whereby Wells Fargo agreed to serve as the “Owner Trustee” over a trust settled by Wynton Aviation for the purpose of “ensur[ing] the eligibility of [the BOMBARDIER JET] for United States registration with the Federal Aviation Administration.”

341. On or about March 29, 2010, a wire for $28,376,000 was sent from the Shearman IOLA Account to the Crowe Aircraft Escrow Account at Bank of Oklahoma. Internal Shearman records show that the $28.376 million transfer was linked to an internal Shearman account held for client 36853 (The Wynton Group) and matter 8 (General).

Singapore is in the middle of a series of court cases against former employees at BSI, Coutts, Falcon Banks, who assisted Jho Low in his money laundering activities and Monetary Authority officials have described the case as the largest and most complex case they have ever had to deal with, involving “staggering sums of money”.

Yesterday, the Swiss authorities likewise proceeded against Coutts Bank as part of an extensive operation there also related to 1MDB.

So, good luck to Jho Low (currently hiding in China) and to Najib with getting back that handy jet.

Meanwhile, Low’s even more expensive yacht appears to have likewise lost its will to move.  After a year of criss-crossing the South China Sea, it has been moored for the past several months (apart from a few battery-charging minor trips) at the yacht marina in Phuket.

Word is now circulating that 1MDB has predictably lost its arbitration battle with Abu Dhabi’s IPIC – a matter that was nearly settled privately and amicably before Christmas in December through talks between both parties and will be forced to pay out billions.

The deal was scotched, it would appear, because Najib wanted the Middle Eastern fund managers (ie Abu Dhabi’s Royal Family) to lie and pretend that diverted and then stolen guarantee payments from 1MDB had indeed been paid to IPIC/Aabar, instead of being funnelled into a bogus BVI company, controlled by Low and his collaborators, with a similar name.

In the UMNO bubble none of this would matter, except that the effects on Malaysia’s ringgit will be relentless.