Hussain Najadi AmBank Founder, who “talked too much”

Pascal Najadi, son of the former AmBank Chairman Hussain Najadi, who was gunned down in broad daylight in Kuala Lumpur, says he has a new informant on the case.

Police have failed to seek a motive for the killing, which took place in late July 2013, shortly after his son says that his father had reported concerns about the Prime Minister’s billion dollar private accounts opened at his former bank to both the police and central Bank Negara.

A car re-possessor named Koong Swee Kwan, was charged and originally found guilty and sentenced to death for carrying out the shooting, but his case is currently subject to a re-trial,.

At the time it was made public that he had been paid a sum of just RM20,000 to carry out the murder and the suspect behind that payment was named as a Malaysian understood to be linked to the gangland world by the name of Lim Yuen Soo.

A warrant was issued for Lim, who was believed to have escaped to China.  However Najadi family members have long complained that little effort was made to pursue the case once the small fry shooter had been found guilty.

Finally, in September 2015 news came through that Lim Yuen Soo had been arrested at KL airport and taken into custody, but was then let go after 8 days owing to an apparent lack of evidence, according to police.  The Najadi family have expressed outrage that they were only advised that the man accused of ordering the murder had finally been arrested after he had already been subsequently released. 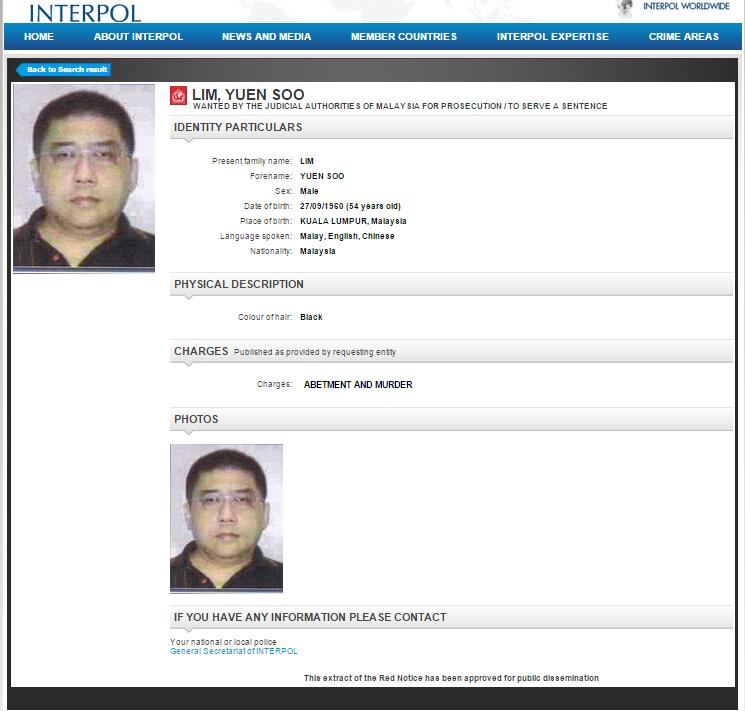 KL police had issued an Interpol alert on Lim Yuen Soo, but released him two years later after his arrest

Pascal Najadi has since protested to the United Nations over what he believes has been a willful failure by the Malaysian police and prosecutors to investigate the motive behind what has been confirmed to have been a hired killing, apparently connected to the Prime Minister. 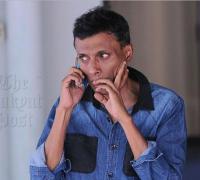 Pascal Najadi has now spoken exclusively to Sarawak Report and provided evidence pointing to a potential new witness in the case.

The witness has also spoken to Sarawak Report and has documented links to known gangland players connected to the case.

These include Richard Morais, who has said “I am a hardcore gangster and fear no one” in texts viewed by Sarawak Report and who is known to be the senior figure in a group known as Zero 4/ [0 4].

Morais has been named as the person who called Hussain Najadi to a meeting at a Chinese Temple frequented by Najadi’s wife on the morning he was shot. The circumstances of that meeting have never been fully explained, given the limitations of the court case, and it was upon leaving the temple that Najadi was shot dead.

The new witness, who was a former associate of Morais, has told Pacal Najadi and Sarawak Report that Morais had admitted to him that he knew that Najadi would be targetted exiting their meeting.

He told me “OK, I knew it would happen to Najadi”.  He was admitting that he had agreed to lure Najadi to the temple. He had never been to that temple before and he never does land deals, he is a gangster not a property dealer.

the witness has told Sarawak Report, making reference to suggestions put forward by police investigators that the purpose of the meeting at the temple had been to discuss planning issues to do with an alleged projected development of the temple site.

The witness has also claimed that police contacts linked to himself and Morais at the time confirmed that it was widely being alleged in the police force after the murder that senior gangland figures with high up political connections in the Chinese establishment had received a RM30 million payment in cash to organise the killing.

“A man who poses as a community philanthropist, but who is really a loan shark boss, was approached by a senior assistant to a senior political figure”

stated the witness, who has been in communication with Pascal Najadi for several months. He provided Sarawak Report with names of police bosses, who he says provided him with the information and also names of the senior political and gangland figures allegedly involved.

“In Malaysia you don’t get the Chinese Zero 24 gang to carry out a murder like this for nothing, they want big money. They organised it using the lesser figures, including the Zero 4 [who are Indian background]. The money was handed out and five days was given to get the job done. Najadi was talking too much”,

the witness said. Pascal Najadi has told Sarawak Report that he was horrified by the information, but not surprised:

“To me it explains the otherwise inexplicable cover-up and failures to investigate this high profile murder of my father. I have considerable confidence in this witness who was a close and long-time associate of the people he is referring to. If this is not what happened it is time the Royal Malaysia Police properly investigated the matter and stop trying to close the case by prosecuting the death sentence against a mere hired shooter”.

The retrial of the hitman Koong Swee Kwan is currently underway and is based on the defence’s submission that the judge who convicted him had also conducted the trial of a fellow suspect in the murder, who was found not guilty after providing highly prejudicial evidence against Koong. The contention is that the judge should not have conducted both trials.