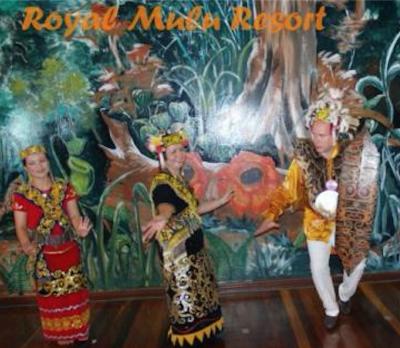 Abang Johari had been Najib’s choice for Chief Minister the first time around, when Taib Mahmud was originally booted upstairs to the Governor’s mansion, but the departing CM sneaked the popular Adenan Satem into the post.

Now that Johari finally has the prize it is clear that he is obediently doing Najib’s bidding, including keeping China happy as part of the 1MDB bail-out plan, secretly organised by Najib’s proxy 2nd Finance Minister, Jho Low.

Johari’s first big foreign visit therefore was to China, where he signed a memorandum of understanding on behalf of Sarawak’s Economic and Development Council (SEDC) that has opened the way for the resource-hungry super-power to move in further on Sarawak’s economy.

In this respect natives from Mulu National Park have expressed outrage that the announcement of the cooperation deal included a cosy arrangement for the management of their National Park resort to be taken over by a Chinese company named Beijing Glory without a word of warning or consultation with the indigenous Berawan tribe, to whom the area once belonged before being confiscated. 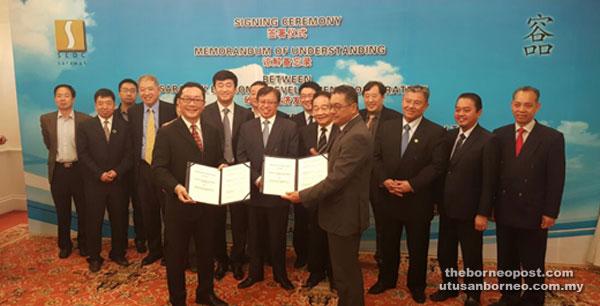 Today representatives of the tribe complained that they were shocked that the transfer of the management of the resort has been handed over to the Chinese company, without so much as a by-your-leave from the wealthy Geneid family (Taib Mahmud’s sister Raziah and her Lebanese husband Robert), who managed to grab control of the area years before in order to develop the luxury jungle ‘eco-hotel’.

The Berawan Tering community in Mulu were in utter shock when they read the above mentioned article. Feelings were mixed among the community members and most of us have an uneasy and uncomfortable feeling with this recent announcement.

Sarawak Report has documented and frequently written about the disgraceful confiscation of this valuable area from the Berawan Tribe by Taib’s influential sister for a mere token compensation. 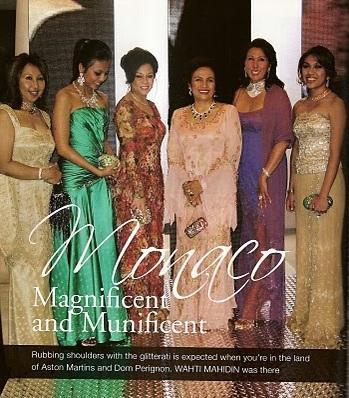 Numerous members of Taib’s family are now shareholders in the various companies behind the luxury resort, which has always been treated as a luxury jungle play-den by the Geneids, who have made millions out of lands and contracts gifted by Raziah’s brother. 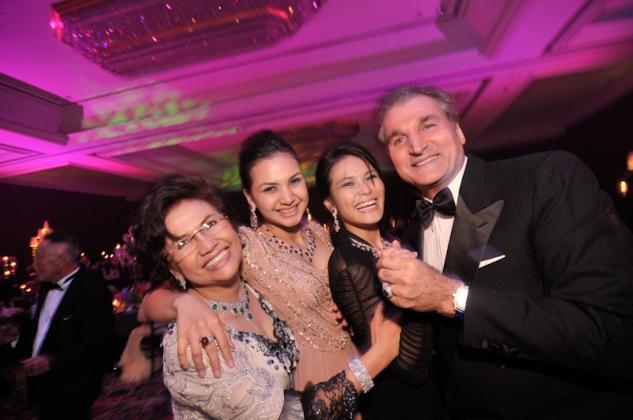 Whilst the disposessed Berewan of Mulu live in shacks and serve in the Mulu Hotel, the fun-loving Geneids are fond of lavish parties, big gems and couture outfits, usually featured in Tatler (where they have shares)

The Berawan themselves have been reduced to seeking what jobs they can, serving and entertaining visitors at the complex. 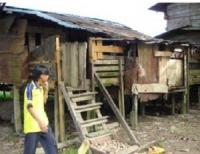 Dwellings of the local Berawan, original owners of Mulu

Nevertheless, the hotel has not been making money and the Geneids, who head the Board of Directors of the Borsamulu management company, have been looking to off-load the management onto professional hands.

Originally, they did a deal with the Marriott Hotel group to develop an ‘eco-resort’.

However, it seems the US company has pulled out following criticism over the corruption associated with the project.

The Berawan protestors have made clear they do not take kindly to this announcement of new Chinese owners without any consultation.

Our community, being the first settlers and natives of Mulu, would truly appreciate that if there were to be any change in the management of Mulu National Park, first consideration should be given to local companies especially companies owned by the local people from the community in Mulu because we locals have first-hand knowledge of our forests and land.

This recent announcement seems to show total disrespect and disregard towards our community who are the natives of Mulu. Does the Sarawak government see us as mere “animals” that rove through Mulu National Park?

Now, the way things have transpired, it seems that the Sarawak government has not only totally ignored our community but has totally surrendered and handed Mulu over to China.

What is more worrying and is one of our main concerns is that when the Chinese company takes over the management of the Park, it will only hire people from China and not give any work opportunities to our local community who live here and need to sustain a livelihood to survive.

Another key concern is that we fear that our Native Customary Rights (NCR) Land would also be handed over to the Chinese company.

Therefore, we object that Beijing Glory should take over the management of Mulu National Park.

Few would argue with such concerns and Sarawak’s Beijing delegation included senior long-standing Sarawak officials, who ought to have known better than to steam-roller through such a deal, for example the State Secretary, Morshidi Abdul Ghani.

However, no one in Sarawak will be of course in the least surprised at Abdul Ghani’s compliance, since his total obedience in all matters has long since been bought and paid for by the present political leadership in the form of a 14,000 oil palm plantation handed to his immediate family for a bargain basement price.

Tired of Mulu? The Geneids have got themselves a 5 star Japanese Golf Course! 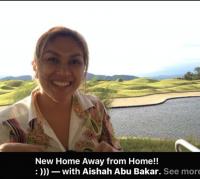 As for the Geneids, Sarawak Report can reveal a brand new discovery from their astonishing wealth portfolio of properties and businesses world-wide, gained as family hangers-on to Taib Mahmud.

Geneid family members have been given to circulating happy holiday snaps of themselves of themselves enjoying their “new home from home”, featuring none other than a very fancy  Japanese golf resort near Mount Fuji named Izu Heights Golf Club.

Research by Sarawak Report’s contacts in Japan has indeed indicated that the ‘entrepreneurial couple’ are as suspected the owners of the plush resort.

The parent company of the rolling golf course, is Izu Heights Development Pte. Ltd., whose representative is none other than Robert Geneid. 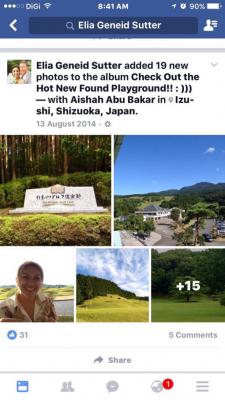 Other daughter Elia Geneid also enjoys the resort. She recieved tens of thousands of hectares of oil palm concessions in her 20s, so can doubtless afford a share

According to available data, the company was established on 28 February 2014 with 10 million yen in capital, but predictably operates at a loss.

But, as far as the family are concerned this is their “Hot New Playground”, so perhaps there will be less time spent at Mulu, leaving the jungle resort with more rooms free to earn some money?