Najib Offers To Take The Stand In Court! 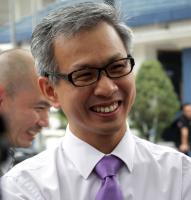 Libel or just facts? Pua receives a second show cause letter from Najib

Such letters are traditionally sent by lawyers under the label “Strictly Private & Confidential’.  However, Najib delivered his so-called ‘letter of demand’ to opposition MP Tony Pua (DAP) on television.

A TV3 news crew had been tipped off to follow the exercise, as an employee of the legal firm Hafarizam Wan & Aisha Mubarak arrived at Pua’s office and handed him the letter that has no legal effect until and unless the Prime Minister carries out his threat to take the matter to court.

It has left the world gasping. Does the Prime Minister of Malaysia seriously intend to put himself in the position of entering the dock to face cross examination on 1MDB?

After all, this is the man who ran when he realised he faced questioning in a debate on the subject from his predecessor Dr Mahathir and who just recently told his police chief to rule out another such debate, scheduled with his minister Mohamed Nazri.

In his three page letter, legal eagle Mohd Hafarizam Bin Harun professes his client to be scandalised by a series of allegations by Tony Pua on the subjects of 1MDB and also UMNO’s shady and baffling recent dealings with the former opposition party PAS.

Harun picks out in bold the comments in Pua’s recent blog posting of April 7th which he finds “defamatory”:

“the bigger agenda …is to bring down a kleptocratic administration led by the biggest thief of all in the country, Dato’ Sri Najib Razak”

Well, Pua certainly didn’t mince his words.  But, after two years of escalating scandal over 1MDB, where waves of evidence have confirmed earlier extremely well-founded suspicions and concerns that the Prime Minister had been lying about the $7 billion missing from the fund, it is hard to think how else Pua could have described the situation.

Back in July 2015 Sarawak Report and the Wall Street Journal published similar allegations and were also threatened with legal action by Najib, who then failed to carry it through.  A full year later the US Department of Justice published a devastating court filing, backing up everyting that had been reported and providing the full money trail for a total of $731 million dollars as it left 1MDB and entered Najib’s personal accounts.

A year on from that and Najib has failed to come up with any concrete rebuttal, beyond claims that an anonymous chap from the Middle East donated him the money.

Can Najib seriously be saying that he is willing now to risk intensive grilling on these matters from a barrister, when he full well knows that the agile minded Tony Pua would simply love to answer each and every question thrown at him on the subject, armed as he is with so much documentation from the American investigations, the Singapore investigations and the Swiss investigations into 1MDB?

Onlookers will now be wondering whether Najib is acting from a dictator’s sense of confidence that he now has such control over the legal system of Malaysia that he can rig a trial whereby he can sue for libel in KL, but not take the stand?

Or, perhaps he thinkd hr can ensure that only the bits he wants to be reported will be reported and a judge can be selected who will find for him, no matter what the evidence?

A country that has been used to a reasonable expectation of due process and relative judicial independence would surely be appalled by such maneouvres, jaded though the population has now become.

Indeed, if Najib manages to organise such special dispensations for himself, then people will be even more inclined to concur with the complaint of the cartoonist Zunar, currently facing threats of a 43 year sentence for tweeting that he believed the judges were now the pawns of politicans in Malaysia (following the conviction of opposition leader Anwar Ibrahim).

Najib’s lawyers are also fussing over Pua’s complaints about the way the whole governing  agenda of the country has been disrupted and held to ransom over the Prime Minister’s political games with the one time opposition party PAS.  Their client takes exception to the claim by Pua that there has been “clear cut collusion” between Najib and PAS over the tabling of their Hudud Bill.

Why has a mini ‘opposition party’ PAS been allowed to lead the governing agenda?

In the light of these statements, which have been highlighted and emphasised by Najib’s lawyers, the Prime Minister says he has been defamed – his reputation undermined.

According to his lawyers it is an outrage, for example, that this opposition politician has claimed that the Prime Minister is not competent to be a leader of the country (what democratic politician does not face that accusation from his political opponents?).

More to the point Najib is injured at the assertion that he has stolen billions in a grand kleptocratic theft, “the biggest scandal in the history of Malaysia” and abused his over-extensive powers spectularly in the process:

Defamation or merely the facts?

These are all extremely pejorative statements and there is little doubt that this opposition MP has made them. But, Najib’s problem is that there are few people in the world, who having viewed the available evidence could not agree that they are true.

Najib doesn’t have a reputation to defend, he lost it two years ago and should have stepped aside at that point.

The PM’s choice of the Putrajaya-based legal partners Hafarizam Wan & Aisha Mubarak to pursue his case is also troubling, since this law practice is itself entangled in the mire of 1MDB.

As more and more details from the anti-corruption commission’s (MACC) investigation into the Prime Minister’s bank accounts have surfaced and circulated in recent weeks, their’s have been one of the names listed as having handled money passed through Najib’s accounts from the civil service KWAP pension fund.

A fat RM3.5 million was paid by Najib from the 1MDB subsidiary SRC (which had borrowed RM4 billion from KWAP) into the firm’s client account in February 2015, according to papers leaked from the MACC investigation:

It raises the prospect of Najib’s own lawyers being called into the witness box by the defendants to explain the payment.

The fact that Najib’s till now pliant new AG has just astonished all by confirming that the investigation into SRC’s RM70 million in transfers to Najib, which he had declared closed in January 2016, is in fact on-going after all, will make such questioning all the more sensitive for their boss.

So, good luck to all of them in such a trial. The world will definitely be watching.

Experience suggests that Najib is likely either to indefinitely delay the action or to opt instead for employing his new law SOSMA, the official secrets Act or his new ‘Emergency Powers Act’ to move against detractors from the opposition, who are attempting to do their  job of holding him to account.

However, he has given himself just 7 days to make good on his threat launch legal action or to look chicken once again: 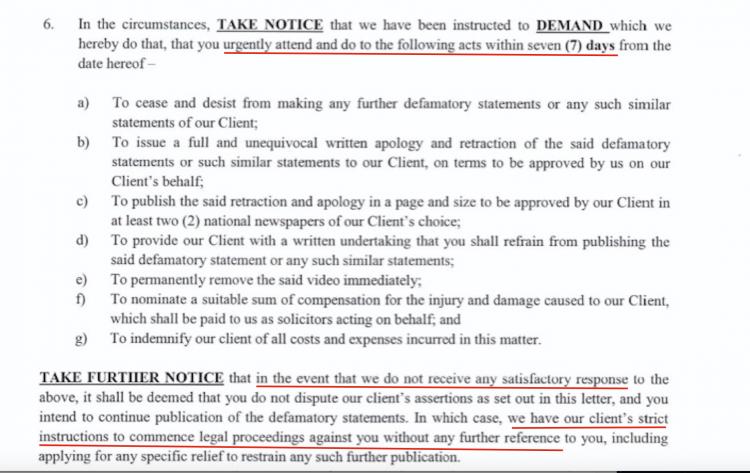 Remove, retract, apologise, pay up – or we take you to court?  Najib threatens to use his powers to “restrain further such publications”