Najib Should Authorise The Release Of His Degree Record

At the time of the introduction of Britain’s data protection laws many wise heads warned of unintended consequences. They were right. Data protection has become the catch-phrase for all those seeking to prevent open records for all the wrong reasons.

Thus is was that when Sarawak Report rang Nottingham University to enquire about its register of degree results it was informed that this is now privileged information owing to the University’s interpretation of the data protection laws.

How convenient, but also how nonsensical. In the United States, quite rightly, a degree is treated as a public record, accessible online.

After all, if people wish to advertise a degree on their Linked In or employ one as a status symbol or use it to gain credibility for a job or any other purpose, then it ought to be immediately available for others to check the claim.

For example, the Prime Minister of Malaysia (who has poured money into Nottingham University) announces on his Wikipedia page that he has a degree in Industrial Economics from the University. Given this is something that he has publicly announced and plainly wishes to be known, why does the University treat it as something to be kept secret?

More worrying, by refusing to openly verify such claims the University and others who choose to play the same game is encouraging a mass of dangerous deception. After all, why bother to purchase a fake degree from a Pakistani ‘degree mill’, like Somerset University or Preston University, for example, when you can claim to have achieved a degree from the likes of Nottingham and no one can disprove it?

According to the clerks at Nottingham University they have a procedure for ‘genuine enquries’, to help for example employers, who might like to check that someone claiming to be a qualified doctor or a civil engineer, perhaps, is genuine. In such cases, if (and only if) the stated degree holder is agreeable, the University is willing to provide a form, which the claimed degree holder must sign before the University will release the information to the specific person who has been authorised to receive it. 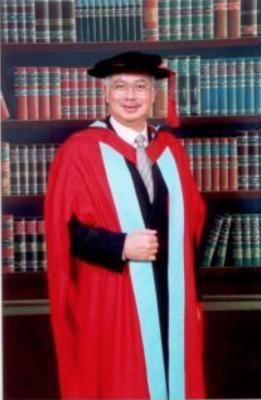 Najib’s life-sized portrait at Nottingham in honour of their ‘favourite alumni’ – but did he sit his exams?

Given however, that he has now driven his country to the brink of ruin, largely because he doesn’t appear to understand that minus $12 billion dollars is rather a lot of missing money, many of his electorate are wondering if he actually earned that degree at all and would like to check it.

Many say that he did not, not least because he was not present in the United Kingdom at the time of the exam that he would have needed to have sat in order to achieve it. There was an excuse of sorts, which was that his father had died a few months before.

Najib’s Wikipedia page tells a different story entirely. It says that he got the degree in impressive time, having just turned 21 in the summer of 1974, and that he then went back to Malaysia, before running for his father’s seat after he died in January 1976.

However, plenty are now sceptical and believe Najib Razak appears to have just decided that if he had sat the exams he would have passed them. Which is not the same thing. Over subsequent years Najib has for whatever reason poured Malaysian money into his former western university, even to the extent of opening a campus in Kuala Lumpur, a fact that has transformed the financial fortunes of this British institution.

This has annoyed many Malaysians, whose Finance Minister (Najib Razak) has been ruthlessly cutting the education budget for primary school children, student grants and all the rest. A large portrait of Najib Razak hangs in the centre of Nottingham university, which some campaigning Malaysian students have tried to have removed.

The matter has now become a political issue in Malaysia, with shades of Donal Trump’s harassment of Barak Obama over the so-called ‘birther issue’. Obama retaliated by publishing his original birth certificate, which satisfied the vast majority of right-minded folk.

But in Malaysia the issue is not resolved. In the latest development a distinguished former civil servant has taken himself out of retirement to challenge Najib in his home seat, citing his concern at the Prime Minister’s reckless management of the country and his propensity to lose billions into his own pocket, without appearing to appreciate the economic consequences for everybody else, who put their trust in him.

Abdul Rahman Mohd Noor says he knows Najib didn’t sit his degree exams, because he was the attache in the London High Commission in charge of student affairs at the time and had also been detailed to assist with the medical aspects surrounding the last month of Najib’s father’s life. 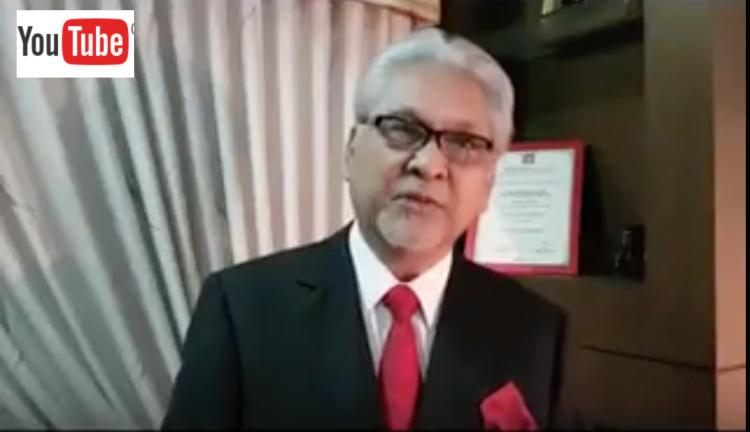 Abdul Rahman says Najib was still at the University when he was handling all these matters at the end of 1975 and departed for Malaysia after his father’s death in January 1976, clearly to mourn his father, but also to immediately campaign to secure the seat left vacant by his death, which he bagged at the tender age of 23.

If this turns out to be the case, it is quite possible that the University has nevertheless awarded their most generous alumnus an honorary degree or doctorate. However, without a shadow of a doubt, it is time that the nature of this relationship between politician and university was made fully transparent, given all the money that has been flooding from Malaysia and the investment in Nottingham’s campus in KL.

Meanwhile, it is time to also question this growing practice in favour of  handing on political positions in Malaysia to relatives after death, as if they were inherited possessions, since this is a backward and corrupted feudal practice, not modern democracy. Such a practice encourages the attitude that the office holder is owed some kind of birthright.  Next (heaven forbid) they might start to abuse their position of trust and authority to extract wealth also not rightfully theirs.

Sarawak Report has a suggestion for the voters of Pahang therefore. To arrive at the truth about this matter they ought to challenge their incumbant MP Najib Razak to sign the release form that will enable Nottingham University, under its own dubious rules, to confirm to Abdul Rahman Mohd Noor whether their top funding alumnus earned his degree or not.