Shocking Case Shows What Najib Ought Really Be Doing About Religious Schools...

On the day that the Prime Minister’s Office proudly announced that Najib was going to hand RM80 million of taxpayers’ money out to religious schools it emerged that an 11 year old boy, who had been routinely flogged by a bullying and plainly unqualified staff member (a convicted felon) in such a place, had died of his ghastly injuries.

It is one of the most troubling and distressing stories this writer has encountered about Malaysia. What has Najib said about it and why is he handing cash, no strings attached, to institutions that appear to be under-monitored when it comes to the protection and education of the most innocent and vulnerable in society?

Of this amount, he said, RM30 million was allocated for coordinating and developing tahfiz education through the National Tahfiz Education Policy (DPTN), the first of its kind given by the government for religious education….

“The handing out of allocations involved 819 recipients representing pondok schools, SMARs and of tahfiz institutions from across the country. [Malaysiakini]

Officials may say ‘no comment’ on the particular case, whilst a doubtless lengthy investigation and legal case drags on. However, the school ought be closed immediately forthwith. That boy didn’t flog himself to death and the rest of the pupils are not in a place of safety if what happened to him went permitted and unreported.

Yet, such matters of basic governance, the protection of the weak and the proper education of all the nation’s children to live in a modern world were as far as possible from Najib’s mind when he handed out his big fat pre-election bribe to predominantly PAS associated institutions in the hope of influencing votes.

The money was vaguely allocated to improvement programmes, but according to the announcement is being distributed directly to these schools, which are generally privately owned.  The purpose was to please voters from a party that BN is seeking to lure over to its side after years of PAS opposition to such corrupt practices.

What a terrible price has been paid by this boy and his family for this turning of a blind eye to how such schools are run, whilst encouraging their spread and private ownership with state handouts. Just to read the awful details of this case is to make any parent want to cry:

The 11-year-old student, whose two legs were amputated due to suspected physical abuse by an assistant warden at a religious school in Johor Baru, has died…Mohamad Thaqif Amin Mohd Gaddafi was undergoing treatment at the Hospital Sultan Ismail, where he was in the high dependency ward. Yesterday, it was reported that the boy might lose his arm as well…

The boy, who was in a comatose state, had his legs amputated after the blood cells and tissues were destroyed by bacterial infection…His right hand had also turned black due to the same infection, while blood clots appeared on his left shoulder.

The boy had in his diary reportedly detailed his suffering at the school and prayed his parents would allow him to be transferred from the religious school. The school assistant warden, who has been remanded over the case, is a convicted felon who served 15 months in jail for theft.

Religious schools are good business for their owners, particularly if they are willing to hire dangerous cut-price staff. Many of such institutions are owned by influential members of PAS.  The party has protested that Sarawak Report has reported the widespread perception in Malaysia that Najib is courting it with public money.  However, handing fat cheques with no real strings attached to such institutions is just one of the ways that Najib is seen by those who have left the party as attempting to buy influence.

Take for example this occasion back in 2015.  Ashraf Wajdi Dusuki, who can be seen handing out the whopping RM235,000.00 cheque below is the minister in the PM’s Office tasked with overseeing the distribution of such handouts, according to former PAS members. 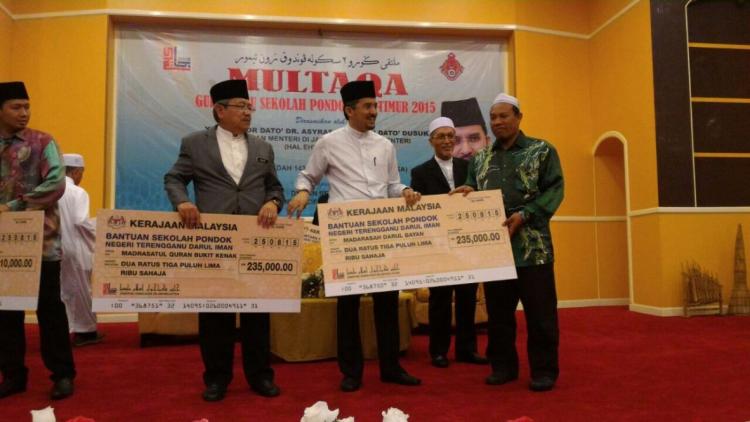 This unprecedented handout was just before the fateful PAS Annual Meeting that agreed to break the party from the opposition PR coalition and the recipient of  Ashraf’s cheque was the Madrasah Darul Bayan, owned by the PAS Terengganu Chief Commisioner Satiful Bahri. The cheque was received at this public ceremony by the Commissioner’s representative. 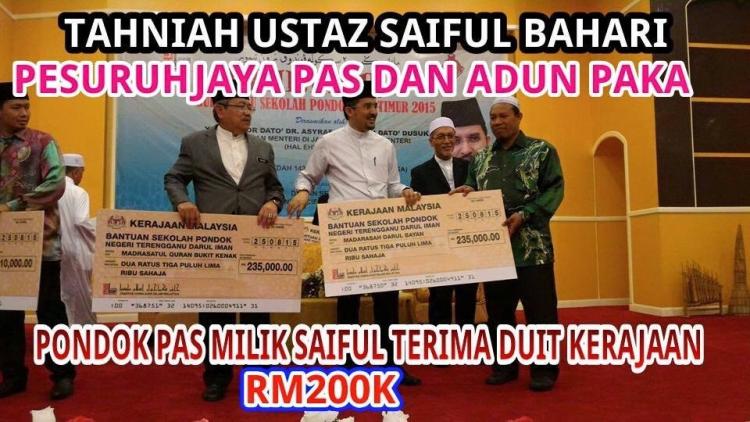 Did PAS worry about the origin of the money the school received?

Opposition politicians are noting the simlar apparently targeted timing of this latest announcement, just before the key PAS General Assembly starting 29th April, which will decide whether to finally sever ties with the opposition PKR and Bersatu, thereby providing BN with a handy split opposition at the upcoming election.

They liken it to PAS being lured to commit electoral suicide for the benefit of Najib.

PAS may not like Sarawak Report reporting on these matters and the concerns of former members and other opposition parties. But, since a boy has now died at one of these schools the government priority ought not to be to just hand out money to these institutions, but to send in squads of inspectors and proper qualified professionals to check they are being run safely and properly.

That is where RM80 million could be usefully spent and it is the right and proper job of government.  Vote buying is NOT how taxpayers money ought be spent.