A captive audience is one that has no choice but to listen to a particular speaker. In Malaysia’s FELDA communities, however, it’s a question of captive voters.

These communities (which command 54 parliamentary seats) are gated and the men at the gate are forbidding and threatening opposition campaigners from entering to canvass, meaning they can only hear from UMNO.

Because, as far as UMNO are concerned, these farm workers belong to them politically and they have no intention of letting them listen to alternative views, apart from the propaganda pumped out on government controlled radio and television and printed media.

The opposition say they have widespread evidence of recent criminal mismanagement of FELDA’s funds and also evidence FELDA money will be used to bribe votes at the upcoming election, just as it was also used, they say, for the Sarawak state election.

FELDA voters are likely to want to hear about that and to question ruling UMNO on the allegations.  After all, MACC investigations into FELDA mismanagement have been on-going for over two years, according to information received by Sarawak Report and just in January there were 5 arrests of senior staff relating to the fund’s investments. 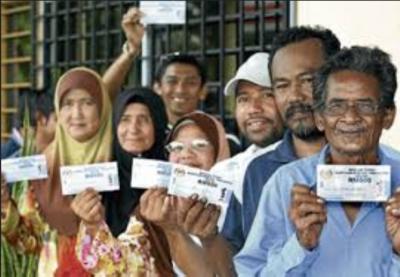 PR in the aftermath of the launch – but were these folk paid with peanuts out of their own money?

FELDA Global Ventures, launched on the stock market at RM5.5 a share in 2012, is latterly worth only a miserable RM1.9 following an immediate series of disastrous investments.

That is a direct loss and blow to the futures of all those settlers, whom Najib had persuaded to release their lands in return for this stock market ‘asset’.

Sarawak Report has already exposed a shocking parallel in Sarawak, where the entire native landowner ASSAR fund has likewise been run down to 17% of its nominal value, thanks to the disappearance of half a billion ringgit into a whole swathe of loss-making ventures, where nobody checked for conflicts of interest.

Pouff!  All the compensation money for native people, who had been forceably thrown off their lands for peanuts, now gone.

FELDA Losses – how settlers were duped

The issue is, say opposition voices, that along with so many other public funds, FELDA, which was set up to guard the interests of these landowners, has been raided and pillaged. Take for example the scandal of FELDA Global Ventures (FGV), Najib’s brain child stockmarket flotation of much of the settler’s land bank in 2012.

Najib had enticed reluctant farmers to release their land with an upfront RM15,000 ‘sweetner’ on the deal.  At $3.1 billion the huge sale was the second largest IPO ever after Facebook. And then the shares plummeted.

Even the Prime Minister’s own political crony and (second) cousin, Shahrir Abdul Samad (their mothers were cousins*) appointed to be CEO in January, expressed shock to discover the disappearance of nearly all the proceeds of that launch upon arriving at the fund:

“Felda received RM6 billion from the listing of FGVH which is Felda’s business asset. From that amount, we have spent RM1.7 billion as windfall,” Shahrir was quoted saying yesterday.

Shahrir said Felda awarded settlers and their families RM15,000 for each household, leaving behind a balance of RM4.3 billion.

“So where did this RM4.3 billion go? I think this has frustrated settlers who are very close to Felda … who admire the role of Felda … I think they have been disappointed,” Shahrir said.

FELDA settlers are right to be disappointed, but Shahrir ought not to have been surprised. He himself admitted to personally receiving a million ringgit handed to him by Najib, after being exposed by Sarawak Report.

Shahrir was clearly appointed for a reason and the former BN back bencher boss soon backtracked into explaining how the FGV money had been unfortunately invested in a number of apparently loss-making hotel and other enterprises, mostly abroad. Now he is trying to sell them off.

Nevertheless, just last month he concluded yet another plainly lousy deal on behalf of his cousin Najib, whereby FELDA agreed to a blatant half billion dollar purchase of 39% of Indonesia’s loss-making Eagle High Plantations way above its market value. The owner of Eagle High is a known businessman crony of the Prime Minister.

FELDA Global Ventures had been originally earmarked to do the deal at an even higher $700 million, however news of the scandal spiked the move and the EPF (a major investor in FGV) ditched its shares.

So, in the same way that Sarawak Report has shown that the vast majority of ventures entered into by ASSAR were loss-making, it appears to be the same with FELDA.  Sabah locals have complained about one investment cited by Shahrir  – The Grand Borneo Hotel in KK.

A local business observer contacted us to ask why FELDA decided on what seemed a poor investment compared to similar opportunities?  They can’t know the answer, they say, owing to lack of transparency in the deal:

The Grand Borneo Hotel was bought for RM86 million, yet our informant says “Not long before that Novotel KK within the same development, within the same block was offered to Felda at just RM70 million plus”.

“Felda‘s management visited Novotel KK. It was a better set up, better brand, higher occupancy, better position within Plaza One Borneo at a cheaper price, yet they bought Grand Borneo Hotel at RM86 million ?

Novotel KK has better location (end lot, more visible/prominent and has long-term contract for crews of few airlines which landing in KK Airport)….where is the capital appreciation?  Who made the commission?”

Sarawak Report has ascertained that The Borneo Hotel has 90 more rooms than Novotel. However on Bookings.com those are advertised at RM174, compared to RM253, meaning Novotel has the opportunity to make higher earnings.

Does Mr Shahrir have the answers?

Meanwhile, stealing from native people and then bribing them at elections with a fraction of their own stolen money has been a pattern in Malaysia and it should end. Native and rural people are no more nor less stupid than the rest of us. They are merely the victims of a conspiracy by those responsible to keep them from hearing about what is going on.