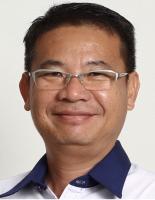 On the day that the United States Department of Justice took a further step in its inexorable proceedings against money laundering from 1MDB, the Treasurer of MCA Selangor let rip about “baseless” allegations on the subject.

It was “childish gutter political tactics” of DAP, he said, to raise information brought into the public sphere of payments to his party by PM Najib Razak “merely  based on an article in Sarawak Report“.

Where has Treasurer Loo Kooi Thiam been for the past two years?

We would humbly point out that the information about the payments to MCA, which in fact amounted to at total of RM13 million between 2012-13, according to the figures we have, is part of a large body of data from Malaysia’s official task force investigations into 1MDB, which has been widely quoted from and not just by Sarawak Report.

Most of the recipients pin-pointed by that data have remained instructively silent over the past few weeks and months, as the evidence has bit by bit leaked out, not just through Sarawak Report but also through the Wall Street Journal, ABC Australia and other platforms.

Others have admitted on the other hand that the payments were true.  For example, Najib’s own brother Nazir, who acknowledged the genuine nature of the data in his own case and said he had mistakenly understood the money received from his brother came from legitimate election donations.  Another UMNO branch head in Sabah, Marcus Mojigoh, has also admitted receiving the sum referred to by the list provided to Sarawak Report.

Only one Jahara Hamed of Penang has contested the data, although she has yet to provide her own evidence and has now apparently gone silent.  So, Mr Loo now joins her in rejecting the evidence about payments to MCA Selangor, likewise failing in the process to provide a transparent alternative insight into his accounts.

We are being asked to take Mr Loo’s word for it, in other words, and also to accept his sweeping claim that there is no other evidence whatsoever to support the contention that money was stolen from 1MDB and then distributed by Najib to BN related parties during, before and after the 2013 election.

“Lee’s allegation is a baseless defamation, which has caused great damage to the Selangor MCA,” Loo added.

If this was to be BN’s response to this mass of data obtained from bank statements, much of which has been corroborated by other information or admitted to, then it ought to have been better coordinated.  As it is, Mr Loo’s is a lonely voice and it also conflicts apparently with an admission by one of his own senior colleagues at MCA Selangor who admitted to have been surprised to be offered money by his Prime Minister, but admitted that he took it.

“I must admit, during the BN supreme council meeting approaching the May 5 general elections, he (Najib) in his capacity as prime minister and BN chairperson, did reveal that in that election, BN will support its component parties’ finances.

“I remembered clearly, I was the first to thank him”,

said former MCA Chairman Chua Soi Lek just last year.  Maybe Treasurer Loo is just out of the loop, in which case his tone of chastisement ill befits him.

Meanwhile, in its further court order in the United States today the DOJ has taken action to retreive money invested in the company Coastal Energy by a company belonging to the fugitive Penangite Jho Low, who is at the heart of the 1MDB scandal and who remains Najib’s closest financial advisor although in exile (what choice does the tainted PM have?).

Today’s court deposition alleges that Jho used 1MDB stolen money to contribute $50 million to the $2.3 billion ‘joint venture’ with Aabar/CEPSA, which benefitted former US jailbird Oscar Wyatt, a major shareholder, to the tune of $500 million.

Inexplicably, says the DOJ, Jho Low then received $350 million back from CEPSA the following week.  The reason for this 300% mark up remains a mystery to the DOJ, states the court deposition.

However, Sarawak Report has learnt from insiders on that deal that the point of Jho Low’s engagement in the ‘joint venture’ with Aabar with this comparatively puny contribution of $50 million was to open the opportunity for ‘options agreements’, which could then be deceitfully bought out.  If so, it was a scam identical to the one played by Jho and his collaborator from Aabar, ex-Chairman Khadem Al Qubaisi, numerous times as they milked money from 1MDB.

Jho Low’s London Mayfair properties, also exclusively revealed for the first time by Sarawak Report last year, have also been seized by the DOJ in the same order – also on the basis that Jho bought them and the company Myla using money stolen from 1MDB.

But, according to MCA Selangor Treasurer Mr Loo, the entire scope of the allegations are “baseless”, of course, and rely only on articles by Sarawak Report.