Has The UK Joined 'The Global Conspiracy Against Najib'? - A Westminster MP Speaks Out 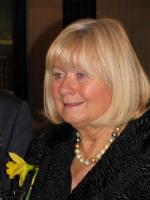 EDM by Ann Clwyd on 1MDB

Next week a British delegation of members of the Houses of Parliament is due to arrive in KL for an inter-parliamentary visit.

Sarawak Report has yet to receive the list of names, however, without a doubt, the mix of MPs and members of the House of Lords will have been appraised of the contents of the Early Day Motion tabled yesterday by Ann Clwyd MP, which slams the Najib government’s handling of 1MDB, abuses of justice and undermining of civil rights.

Najib and his remaining vocal supporters, such as Hadi Awang the leader of PAS, will of course dismiss the statement as more ‘foreign meddling’ and complain that the ‘global plot’ to ‘topple’ the Prime Minister is widening.  However, there is of course a simpler reason behind the growing international condemnation of the situation in Malaysia.

Ann Clwyd is a veteran of British politics, having held her Welsh Labour seat since 1984.  She is known for her formidable manner and she has always held a particular interest in international development, which led to her being one of the leading figures behind the uncovering of the Pergau Dam ‘arms for aid’ affair, which remains Britain’s most embarrassing foreign aid scandal and affected relations with Malaysia for years after.

Najib became Defence Minister in 1991, just as the payments on that dam contract were being processed as part of an arms purchase agreement – the scandal led directly to that practice becoming outlawed.

Therefore, Ann Clwyd knows more than most British MPs about the background to events unfolding in Malaysia and she has kept herself informed on developments in KL and with 1MDB.

In 2020 Malaysia takes up the Chairmanship of the Commonwealth and a week ago Clwyd expressed her concern at a meeting held in Westminster about the reputational issues to that institution should Najib remain the man in charge. Yesterday’s court developments in France with respect to yet another arms scandal involving Najib will not have mollified that concern.

This is not about a plot, plainly, but of a growing international concern over a senior international leader, who remains in office despite having been unmasked as one of the world’s worst kleptocrats, siphoning money out of a submarine deal and now 1MDB.

That concern extends to the fact that Najib has blatantly hounded his main political opponent into jail, through what the Early Day Motion (EDM) accurately describes as “legal proceedings which fell far short of international standards” and has further abused the legislative process to crack down on criticism and dissent.

Ann Clwyd is elected to uphold good governance by her constituents and recognises that the Commonwealth would not benefit from being chaired by a known international crook, who has cheated to stay in power, not least by gerrymandering and a host of other election tricks.

Yet, the comments of some of Najib’s supporters as the story was reported in Malaysia today, sum up the world view of his party perfectly, it seems

“How much did they pay this MP?”

one of them has asked.  Sadly, such people simply don’t get the concept of public service being the point of public office.  And, with an example to look up to like Najib Razak, it is perhaps not that surprising.  This is the full wording of the EDM:

That this House is alarmed about allegations of the misappropriation of billions of dollars from the 1Malaysia Development Berhad, a state-owned investment firm intended to promote economic development in Malaysia, including by the current Malaysian Prime Minister, Najib Razak; notes related on-going investigations in a number of countries, including the US and Switzerland; further notes the statement by the FBI Deputy Director Andrew McCabe, in connection with the largest single action so far by the US Department of Justice’s Kleptocracy Asset Initiative, that the Malaysian people were defrauded on an enormous scale; highlights the continuing restrictions on freedom of expression and of association in Malaysia, as well as the misuse of the Sedition Act, targeted particularly at Government critics, including opposition politicians and MPs, such as Anwar Ibrahim, jailed following legal proceedings which fell far short of international standards, and Rafizi Ramli MP; encourages the Government of Malaysia to allow international observers, including from a range of Commonwealth countries, at its upcoming General Elections, to demonstrate its commitment to free and fair elections, particularly given Malaysia will be taking up the Chair-in-Office of the Commonwealth in 2020; and calls on the Government to ensure that allegations of misappropriated funds from Malaysia having been used to by assets in the UK is thoroughly investigated.

The British MP’s delegation will not now be able to ignore these scandals in Malaysia, despite the enthusiasm of the present government for various trade deals masterminded by the likes of the Conservative big-wig, Lord Marland.  They will be bound to scrutinise these issues fully and question the Malaysian government about what is being done.

The issue of election monitoring will now also be rightly placed high on the international agenda for Malaysia – if Najib has nothing to hide, he should not worry about accepting objective observers, after all.