The Signs Are Full Steam Ahead For An October Election Option - But Trump Visit Will Backfire Badly!

Najib Razak has to be the only international leader who is seeking out Donald Trump these days, since the rest of the world’s movers and shakers are diplomatically doing their best to distance themselves as best they can from the bungling president. However, in this case, the two are as controversial as each other.

Meant to be kept under wraps for these very reasons until the last minute (the Wall Street Journal scooped the leak) the news of the invitation has already rebounded negatively on the international stage, causing further embarrasment for Trump and bringing further world attention to Najib’s scandalous kleptocracy. 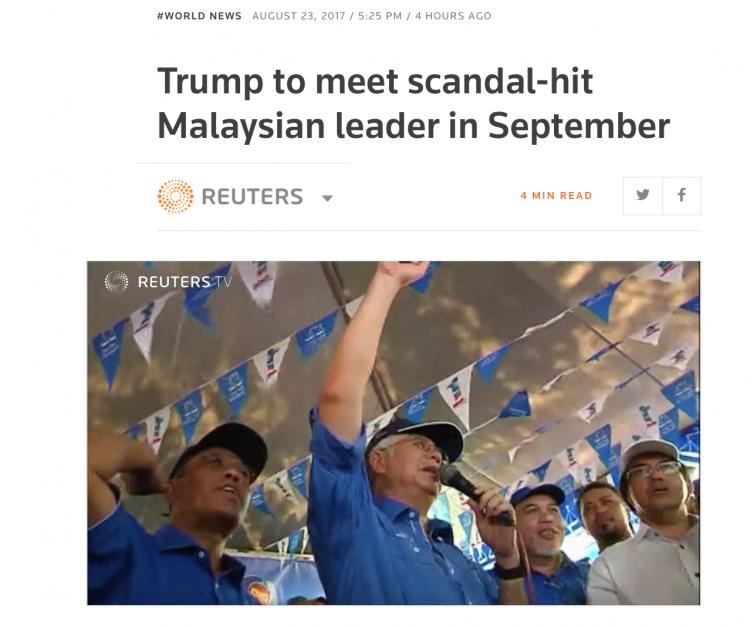 Drawing attention to Najib’s scandal – is that a good idea?

However, it is being played out differently by Malaysia’s propaganda machines, desperate to imply to domestic voters that Najib has turned the tables on the criminal case involving 1MDB.  The timing of the visit in mid-September is the surest sign yet that Najib is still placing his hopes on an October election.

It is a PR mistake, because if and when Najib does meet Trump (whose own position by now looks as fragile as Najib’s) those already negative headlines will become all the more acute, to the further detriment of both parties.

Trump is already being written off as a fruit-cake by most of the world’s media, which will not hesitate to wallow in Najib’s notoriety and reflect it back on the floundering president. As for Najib, he is already known to be a mega-thief by the readers of financial papers and after this visit every cable TV news viewer on the planet will know it too.

Getting Off The Hook?

Malaysia’s Prime Minister has one good reason, only too plain for all to see, for begging this Trump audience. He still reckons the ‘top boss man’ in the US can get him off the hook over the 1MDB mega-theft.  It’s how many Malaysians also think: after all, that’s how it works back home under BN.

Najib’s big bargaining chip will be North Korea and Malaysia’s strategic positioning in the South China Sea.  He will be hoping convince the President that it is absolutely vital to his efforts to contain the madman of Pyonyang that Malaysia be kept ‘on-side’ –  the price being, of course, that Najib Razak gets let off the hook for stealing $6 billion and laundering most of it through the United States.

To this end it has already been reported that Najib has hired, at the usual grand public expense, a rookie lobbyist, who was on Trump’s campaign, much in the same way he earlier threw 1MDB money at a company called DuSable Capital Management, owned by Obama’s confidant, Frank White.

That huge payment to White apparently helped gain Najib a game of golf and a couple of meetings with the previous president, before White rapidly pulled out of the toxic association with 1MDB after it was exposed by Sarawak Report.

The betting has to be that this lobby effort won’t get much futher either, since Malaysia is of course merely a bit-player in the North Korea strategic row.

This is particularly since Najib has allowed his country to develop extraordinarily extensive ties with that oppressive regime, in return for the use of slave labour from North Korean prison camps for mines and businesses owned by Najib’s political allies in places like Sarawak (family members of present Sarawak Chief Minister, Abang Jo, and previous Chief Minister, Taib Mahmud, were using North Korean slaves to dig coal at their ‘Lucky Hill’ mining concern, which has lethally exploded twice in recent years). 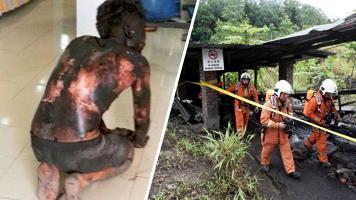 Americans will further have to consider how it was in the middle of KL airport that North Korean operatives were able to murder the brother of North Korea’s mad dictator with toxic poisons deployed in a public place and then how those behind these operatives were later protected and sent home through a deal done by Najib with the Embassy.

Likewise, in considering Najib’s value as an ally (compared to just about any other potential alternative Malaysian leader) the US State Department will note his recent cosying up to China, allowing it new strategic footholds and economic inroads into Malaysia’s independence, purely in order to bail himself out over the billions he has stolen.

For such reasons Najib’s finagling of a meeting with Trump is highly unlikely to result in a command by the State Department to the Department of Justice that US national interest requires that Najib Razak is let off the hook over criminal activities on US soil. Not least, because the matter has become so intensly public.

But, Najib’s perception managers will stick to their game plan for now.   The meeting with  Trump will be portrayed as validation by the United States and proof that the Prime Minister can still visit the US (on a diplomatic passport) without being arrested.

Najb’s propagandists will then continue to say that this can be taken as ‘confirmation that the case against 1MDB has been dropped’ and that Najib was always ‘innocent’.

If they can convince a section of the electorate that this nonsense is true, despite the continuing criminal investigations by the DOJ, then they will consider their objective achieved towards an October election, safe in the knowledge that if things still look too unpromising that month the PM will be able to put off the party till next year.

As part of this timing, Najib will also try to gain a perception advantage by seeking to personally take the glory from the South East Asian games, also to be hosted in Malaysia the coming month. Forget the atheletes, it will be Najib who will be acting as if he won those medals with Rosmah excelling at the ladies events!

Economically, the advantage of polling as soon as possible in October is that Najib only has to continue to throw Bank Negara’s reserves at propping up the ringgit for just another month, having somehow paid off the remaining $300 million owed to IPIC by the end of August, while avoiding the awful prospect of having to pretend that 1MDB has found another £600 million plus (‘from its rationalisation exercises’) which is due by the end of the year. 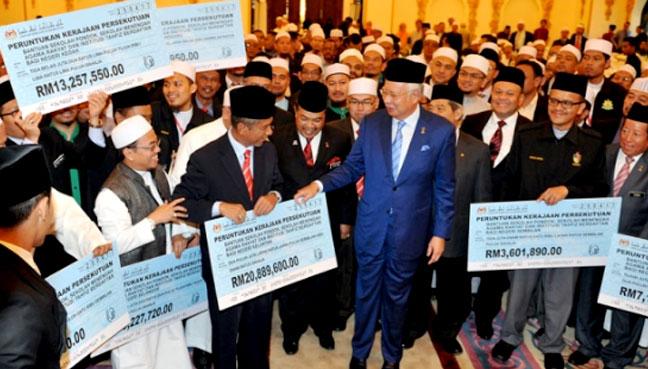 The other glaring sign that Najib is hoping to make that October election choice is that he has started signing mock cheques and flashing promised cash in key areas he is seeking votes. Last week came RM200 million for Kedah in Langkawi, before that RM80 million for religious schools.  “I help you if you help me” has been Najib’s blatant electioneering slogan over the years, and now he is getting underway with that well established pattern of open election bribery once again.

We suggest any would-be bought voters should demand to see the actual colour of Najib’s money first, however, rather than falling for ‘mock cheques’ and promises of investment that won’t ever happen. The rats have cleared the larder.

So, it is all about keeping up appearances and winning an election so that those responsible can issue their own pardons.  Opponents have already noted with weary recognition the heightened hysteria from Najib’s teams of ‘cyber-warriors’ and ‘perception war-mongers’, who get extra dedak at such times, and the growing level of public accusations, aggressive legal persecutions and ‘crackdowns’ on critics.

We can all look forward to more: improbable and disreputable individuals will be dragged before cameras to ‘confess’ to having ‘collaborated’ with Najib’s various political enemies and civil society detractors; Royal Commissions will be called for to investigate anything under the sun (as long as it does not involve matters such as Altantuya, 1MDB, Scorpene, defence contracts or judicial persecutions) and yet more wild global conspiracy theories and nonsense accusations will be confected out of the back of the nasi lemak cafe in Moss Side, Manchester owned by the son of Najib’s self-proclaimed ‘proxy’ blogger, ‘RPK’ and elsewhere.

Yes, election season is underway for all to see.