Has Najib Razak just made the miscalculation of his political career?  Was this his fire the FBI Director moment, as he attempted to curry favour off a President, whose Justice Department has been investigating him for fraud?

Malaysian Airlines has been fighting off bankruptsy, yet Prime Minister Najib Razak publicly tasked it yesterday with buying scores of jets to the tune of $10 billion, all apparently to help President Trump brag that he is ‘doing deals’ to boost the US economy!

Worse, Najib also dangled what is left of Kazanah’s sovereign wealth reserves and even the pension money invested in the Employee Provident Fund in front of Trump, wheedling in an audibly trembling voice:

Meanwhile Najib has been borrowing long-term from China to support Chinese orientated infrastructure projects (and conceal 1MDB interest repayments) back home in Malaysia!

Najib of course has no legitimate authority to speak for the EPF in this way. The fund is supposed to make its decisions based solely on what will benefit ordinary Malaysian pensioners. However, here was Najib in the White House promising to funnel Malaysia’s savings into US infrastructure, in order to put a feather in the baseball cap of Donald Trump.

Neither ought Najib speak for the sovereign fund Kazanah. Yet his very next promise (in grovelling tones) was that he would ensure that Kazanah will pour in more of its reserves into Silicon Valley.  Trump has expressed annoyance over how Malaysia was starting to do rather well out of its own high-tech components production and has in previous years developed a healthy positive trade balance with the United States.  Trump wants to ‘bring those jobs back to America’ and Najib obliged by saying he would use Malaysia’s money to help him do it!

Is this how Najib hopes he can buy Donal Trump’s influence over the Justice Department and call off the investigation into 1MDB – at the expense of Malaysia’s ordinary folk and their savings?  It certainly looks like it:

Number one, we want to help you in terms of strengthening the US economy. I come with three specific proposals. Number one, we intend to increase the number of Boeing planes to be purchased by MAS. We are committed to 25 planes of the 737 MAX 10, plus eight 787 Dreamliners. And there is a strong probability – not possibility – probability that we will add 25 more 737 MAX 10 in the near future. So within five years, the deal will be worth beyond $10 billion. That’s one. We will also try to persuade AirAsia to purchase GE engines… [Najib speech at White House]

After all, Najib’s surprise purchase announcement appears in conflict with all recent predictions about the airline’s planned purchases and readjustments, which include far more modest leasing arrangements and the divestment of several aircraft.  What reason for this crippling U-Turn?

As for Air Asia, their senior executives are reportedly still laughing at the commitment on their behalf.

The misjudgements have piled up further. According to senior finance ministery sources the Malaysian Government is presently struggling to find funds to pay its civil servants salaries over the coming months.  Tax receipts have plunged in recent quarters. Under such circumstances one would have suggested the visiting PM and his wife might have made do with bunking down at the Embassy or somewhere modest for their US visit, which is already costing taxpayers a bomb.

But no, it has emerged that Malaysian taxpayers have the privilege of forking out for the first couple and their entourage to stay at none other than the fantastically expensive 5 Star Trump Hotel in Washington, which offers rooms up to the cost of a staggering $3,500 (RM15,000) a night for an Executive Suite. 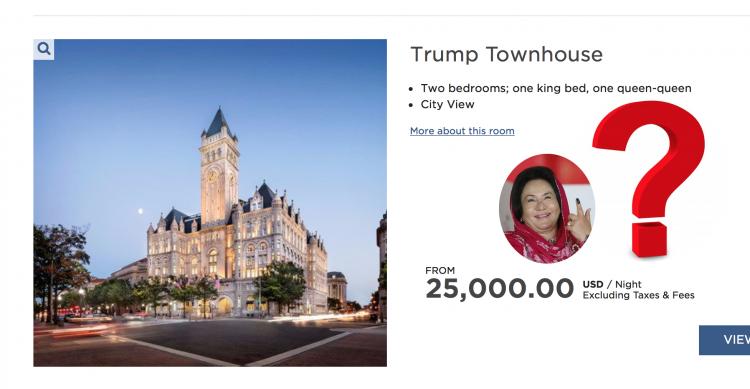 Spend big – it benefits our host!

To any observer the decision to stay at this particular hotel out of all on offer in the US capital represents a blatant blandishment.  It is exactly the sort of payout that ethics guides and Trump’s critics have pointed out was the danger from the President not fully divesting his interests or presenting his finances transparently.

From the first day of his presidency people have complained that tin-pot dictators would start beating a path to the door of his various hotel establishments in order to shower him with praise and money.  Najib just did exactly that and the US media are already baying in disgust at the shameful behaviour of their President once more.

It makes Malaysians look cheap, whilst costing their country dear!

And, just in case anyone is trying to argue that the Trump Hotel DC stay was just a coincidence or a convenience that happened to rack up millions, it has now been revealed that when Najib’s ‘formal working visit’ ends, he and his wife and entourage will be heading over to New York, where they will be again, but this time ‘informally’ meeting Donald Trump and staying – GUESS WHERE? – at his Trump Hotel NY!

4.      …After the 30-minute meeting between Najib and President of Trump on this day, I was informed there would be another meeting between President Trump and family members of Dato ‘Seri Najib in a private location that is the Trump Tower in New York, owned by the family of President Trump [translation of information from a senior source provided to opposition MP Rafizi Ramli, published yesterday]

Do we think that the ‘First Family’ and their over-grown boys will be paying for that ‘holiday’ stay themselves?  To the contrary, we advise that once again, Malaysia must brace itself for the bill for Donald’s gold plated hospitality, although the civil servants who have organised the trip may find themselves without a salary sometime soon.

Golden opporutnity for a quiet whisper in Trump’s ear about a private condition for the deal?

1MDB and the word ‘kleptocracy’ were strictly off the Make American Great Again agenda at the White House, according to the press briefing given by its spokesman (Najib turned down the opportunity offered to meet the press – funny that).

However, one wonders if it might not just be a bit more central to those private discussions later in New York?  After all, what exactly is the point of having a completely separate planned but private meeting in Trump’s own home away from the formalities and publicity of Najib’s supposed ‘official visit’?

Najib will have to forgive Malaysians for assuming that it is at this meeting that Najib plans to bring up 1MDB.  For example he could open with:

“Mr President, look what we offered you.  Billions to be sucked from the bank accounts and pension funds of ordinary Malaysians, just so you can do your big bragging number about “making great deals” and bringing money back to the US.  So, now we are away from the cameras, can we discuss my private condition to this particular deal?  It’s no skin off your nose and since you’re a businesman, you know how it goes!”

Najib cannot avoid the fact that the vast majority of Malaysians will surmise that this has been the real purpose of this expensive trip orgainised by hired lobbyists and that Najib will be looking for a commitment from Trump at this special little side-meeting to lay off the pressure from the DOJ.  After all, why should Najib want to help ‘MAGA’ at Malaysia’s expense for nothing in return?

What is worrying him most and particularly his wife Rosmah is that her son Riza has been named by the Department in its court papers as a top suspect in its present criminal investigations, together with his gambling pal Jho Low who was Najib’s proxy for the thefts. Beyond them, the finger points squarely at the ‘First Couple’ themselves.

The Prime Minister must be hoping for a sympathetic ear.  Trump hates the DOJ, after all they are on to him too! Trump is also no ordinary president, as the majority of Americans seem to be swiftly learning to regret: he puts his personal brand and alleged business sense far above the importance of the normal considerations of the body politic, like upholding law and order.

So, Najib plainly hopes that by giving Trump a podium gift he can use for years:
“I got an order for 58 jets from the Republic of Malaysia folks, just from one smart deal I made with their President Najib”), he can get the DOJ off his back.

Trump will doubtless tell Najib that he will see what he can do and not to worry, just sign for those planes.  But, the truth is neither party can deliver on either side of this phoney announcement made by two hucksters both in the business of perceptions rather than reality.

Najib has behind him a string of recent MOUs forged with numerous heads of state, which have all bitten the dust once the political moment passed. Strategic economic alliances with Saudi Arabia and Abu Dhabi; massive arms purchases promised to Britain, France and Russia; huge projects with China all aimed at keeping foreign governments sweet and lowering criticism or trying to create a grand impression in the newspapers back home.

Najib’s finances are bare – he could barely pay the fines to IPIC for 1MDB last month – the endless promises to buy, dispensed whenever he meets a foreign leader, are just so much candy floss on a stick (dig into the deal and there is no substance).

And, just in the same way that Trump is never going to sell those planes, the US President is in no position either to deliver on a promise to pull off the dogs from the DOJ.  He can’t even shut them up about his own Russian business deals, which plainly keeps him up worrying half the night.

These two deeply unpopular leaders may sympathise with each other, but the only way they can actually help each other is by pretending. Najib will pretend to invest in MAGA and Trump will help pretend that the US is no longer investigating 1MDB.

Their problem is that hucksters get rumbled sooner rather than later and the game they are playing is fairly plain and obvious to a growing segment of the population of both countries, whatever gets pumped out on Malaysia’s “Fake News” propaganda stations.