Someone clearly thought it was a good idea to help out Malaysia’s unpopular and criminal PM, Najib Razak, with a high-profile visit to Donald Trump in advance of calling an awkward election.

That person must think that a broad coalition, led on a reform agenda by a previous highly sucessful Prime Minister of twenty years, would be a worse option for Malaysian or perhaps American interests than a notorious kleptocrat.

They must also consider it would be better for Najib to remain as PM rather than his jailed opponent, a former successful Finance Minister, who won the popular vote in GE13 and has campaigned against the endemic corruption that wracks the country.

However, it is a position that is getting harder by the day to argue, certainly in terms of public perception, because people are wondering why the Trump administration appears to be cynically ignoring its own legal action against theft and money-laundering that benefitted Najib and his own wife and family (the largest ever kleptocracy case)?

Also, why is it also contradicting its own policy on North Korea by welcoming Malaysia’s leader instead of blasting him for his various illegal dealings with the rogue nuclear state?

Indeed, if Najib and Trump dare take questions during this White House visit they can be pretty sure these are the sort of things most journalists will want to ask about. Leo DiCaprio’s Piccaso gift; Miranda Ker’s diamonds, Rosie’s $27million dollar necklace and Jho Low’s yacht, all funded from stolen development money will make irresistable topics – and then there is also the tricky matter of Malaysia’s use of North Korean slave labour.

Why is Trump being advised to associate with such a tainted pair? One long-time Washington observer has suggested one frivolous reason to Sarawak Report, which would surely be inadequate:

Trump likes to meet with everyone. He likes to be distracted and entertained, by people coming to see him, in his space. He hates overseas trips. People have to come to the throne room to see him.

It has been suggested things might in fact turn ugly in that Throne Room, given recent events, were Trump to receive a proper briefing on the nature of his husband and wife team guests.

North Korea is the foreign topic first and foremost on the President’s mind, followed by his steaming frustration over China over this and other matters, and Malaysia is negatively connected to these issues.

After North Korea detonated a hydrogen bomb at the weekend Trump threatened to cut economic ties with all countries that trade with the pariah state and by now he ought to know that one of the worst offenders and violators of UN sanctions over North Korea in recent years has been Najib’s BN government.

In a recent article The Diplomat magazine succinctly summarised Malaysia’s wilful flouting of UN sanctions and its western allies in its dealings with North Korea. It makes highly disturbing reading:

The article also highlights Malaysia’s “rare reciprocal visa-free travel arrangement” with North Korea, which undoubtedly assisted in the assassination of Kim Jong-nam. It goes on to point out that Malaysia’s lax import and export controls has made it a serious weak link over proliferation of arms and nuclear products.  This worried the Obama administration, says the Diplomat and it should worry Trump all the more so:

the Obama administration expressed concern – especially in relation to Iran – that “Malaysia was becoming the ‘new Dubai’ for illicit traders.”…Despite improvements, there are still limitations: the Financial Action Task Force noted in its 2015 review of Malaysian anti-money laundering and counterterrorist finance controls that Malaysia still has significant technical gaps in the implementation of targeted financial sanctions, such as long delays in transposing new UN designations.

UN reports in 2013 and 2016 suggested that the country had been used as a meeting venue, and traveled through, by North Korean arms dealers….Glocom is said to be a “Malaysia-based company” advertising “radio communications equipment for military and paramilitary organizations.” While not officially registered in Malaysia, two Malaysian registered companies .. were said to be acting on its behalf. The UN report describes Glocom as a “front company of the Democratic People’s Republic of Korea company Pan Systems Pyongyang Branch.
A second case involved Kay Marine, a boat builder sanctioned by the U.S. State Department in 2016….. Are there more Glocoms and Kay Marines in Malaysia or elsewhere? Likely so.

There are other shocking human rights aspects to the Najib government’s self-interested exploitation of North Korea’s attempts at sanctions busting.  Malaysia is one of the few countries in the world that has permitted the provision of work visas for North Korean nationals and it was Sarawak Report which exposed how the families of BN government ministers have been exploiting the arrangement to import slave gangs of North Korean prisoners to do dirty jobs in mines and other work sites in Sarawak.

The shocking and disgraceful exploitation, a violation of basic human rights, came to light after two fatal explosions at the Lucky Hill coal mine of Sarawak. The victims turned out to be these unfortunate slaves, imported as one Sarawak Government spokesman explained, because local people were unwilling to do the unpleasant and dangerous work (especially not for free one assumes).

The owners of the Lucky Hill Mining company included a brother of the present Chief Minister of Sarawak and a sister of the former Chief Minister and present Governor of the state, Taib Mahmud.

No action was of course taken against these high-level folk either over human rights attrocities or plain safety failures. The surving workers have been dispersed from the mines, however activists have informed Sarawak Report that these free labourers have since been spotted on various construction sites around the state, meaning that the government of Najib Razak has done nothing to clean up its act on the use of slave labour from North Korea.

Sarawak Report suggests that Trump address these matters with Najib and that his administration should recognise that a regime that is corrupt and morally bankrupt is also a dangerous regime to his neighbours and supposed allies like the United States.

The other major concern over Najib and his wife is a domestic matter for the United States, since the FBI have been conducting a massive criminal investigation into the money launding of over $4.5 billion of stolen money through the purchase of assets in the United States.

Last month they confirmed that the asset seizures are part of a major criminal investigation, an announcement with Najib’s supporters attempted to spin into a claim that the entire case on 1MDB had been dropped. This could not be further from the case, although Trump’s invititation will of course enable the same spinners to further claim it represents ‘proof’ that the United States Department of Justice plans to let their leader off the hook over the largest global kleptocracy investigation ever undertaken.

Further developments over the last 24 hours have ratchetted up this matter further also with the FBI depicting Najib’s government in its latest court statements in the most sinister terms possible – willing to threaten, intimidate and even endanger witnesses to the case.

Sarawak Report has examined the court documents, placed before the Los Angeles Central Court at the start of the week, and they provide a damning assessment.  The string of filings make clear that the DOJ had applied to ‘stay’ (freeze) its civil action on 10th August for the simple reason that the legal teams representing Jho Low (and his family trust), Riza Aziz, Khadem al Qubaisi and their various companies under seizure had started to ask for disclosure of the FBI’s evidence on the case.

Since the latest FBI/DOJ court filing had consisted of 251 pages of closely detailed evidence the defence teams had come back demanding a list of no less than 358 items of disclosure representing thousands of documents, emails and witness statements from the parallel criminal investigation presently underway into the thefts from 1MDB: 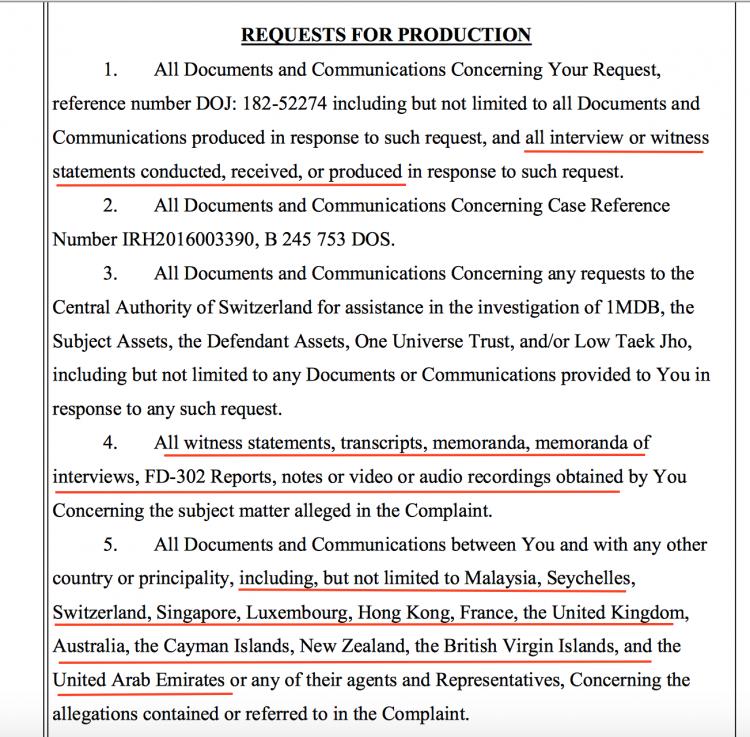 It was in reponse to this that the DOJ applied to freeze the civil case until it has completed all its other criminal investigations. The defence lawyers opposed their motion and on Monday 5th September the DOJ lodged a rejection of that demand with a series of legal responses backed by statements from their investigators.

Their prime concern was that if the information being demanded by Jho Low’s lawyers were given out then witnesses would more than likely to be threatened an intimidated and indeed worse.  It paints an unflatering picture of the suspected criminals behind the 1MDB thefts and their position on the case looks sure to be upheld.

Testifying as to why such matters must not be disclosed FBI agent Robert Heuchling laid a declaration before the court including the following statement:

By obtaining discovery directly from the government or
third parties about the government’s investigation, individuals and
entities involved in the Criminal Phases could potentially conceal,
alter, or destroy evidence, as well as intimidate and/or retaliate
against potential witnesses.

The FBI agent then provides the court with some examples of the threatening and extra-judicial tactics taken by the Najib Government against 1MDB critics and other forms of intimidation that have been carried out in KL. It makes for shameful reading:

This is a shameful reminder of what has been going on in Malaysia now put before a US court.  A former Ambassador to Malaysia John Malott has also been writing about the situation in an article that like many others ought to be taken up and read by Trump’s advisors.  Malott also posted this succinct summary on his Facebook:

“Basic facts: Najib and his family and cronies have stolen somewhere between 4 and 8 Billion dollars from the country. The US Department of Justice has moved to seize the assets they bought with that money in the US. Malaysia consistently breaks UN and international sanctions on North Korea. Najib has imprisoned his political foes, charged them with sedition, and taken away their passports. He controls the newspapers, television, and radio. The police and judiciary are totally under his thumb. He and his corrupt wife run the government like a family business. Businesses tremble before him. Plus he likes to play golf. He’s really Trump’s kind of guy.”

As John Malott said in his article – “Welcome to Washington Mr Prime Minister”!