Is Najib Starting To Regret The Enemies He's Made? COMMENT

After the cringe-making scenes over the past two days, where Prime Minister Najib and his wife staged a ‘sympathy photo-op’ at the bedside of their victim, the political prisoner Anwar Ibrahim, closely followed by the Deputy Prime Minister, Zahid Hamidi, it is clear there is a drive for ‘reconciliation’ underway.

Everyone knows that it was Najib who hatched the plot to frame Anwar, given all the evidence that has become available.  It is also plain that he was behind the abusive legal process by which Anwar’s High Court acquittal was over-turned, owing to an appeal made by the prosecution, which had no place in law. 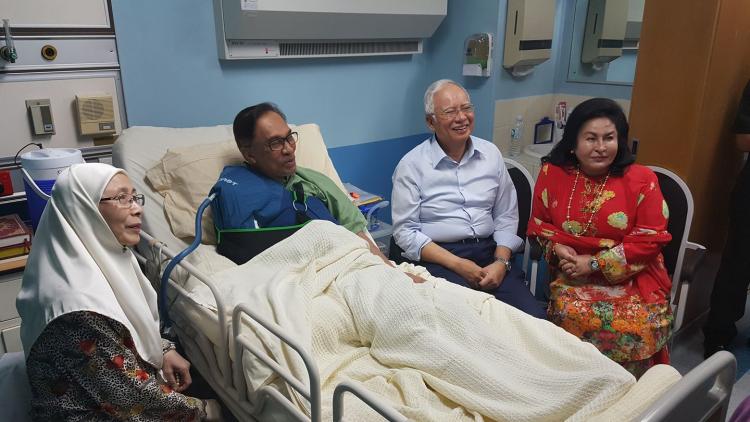 Easy for the Prime Minister to display the ease and health of a free man. But, does he secretly fear that it is he who ought rightfully swap places with imprisoned Anwar?

At the time Najib reckoned he needed the man, who garnered more votes than he did in GE 2013, behind bars. However, now he is trying to show the world what a nice fellow he is by turning up to visit his prisoner in hospital, after years of sleeping on a prison floor had necessitated another operation on Anwar’s back (the first was thanks to being beaten up in jail the first time round).

Few would have mustered up the saintliness to have produced the thin smile that Malaysia’s opposition leader so graciously provided for his uninvited guests. But, maybe he is enjoying the satisfaction of knowing how the gesture proves that Putrajaya’s incumbants feel vulnerable as the next election looms?

Were offers made, one wonders, to Malaysia’s long-suffering and charismatic politician during that sympathy visit, as Najib strives to neutralise the toxic and unexpected joint Mahathir/Anwar ticket poised to lead the opposition in 2018?

It would be clutching at straws, but a key plank of Najib’s long-term re-election strategy, which was the prizing of PAS from the opposition camp, appears to be showing diminishing returns in the face of popular disillusionment with PAS as a result.

Information passed to Sarawak Report also indicates that Najib is likewise trying to create an impression of sweetness and light with powerful enemies abroad. A major PR initiative was designed to create the impression that Najib had ‘squared’ the United States and United Kingdom when he visited both in September.

‘Look I wasn’t arrested’! was the PM’s triumphant message as the Malaysian delegation camped out in force at the Trump Hotel in DC and committed future billions of Malaysia’s public money to benefit both those foreign powers, who are investigating Najib. his family and associates for kleptocracy and money laundering in their jurisdictions.

Sarawak Report received advance details of another foreign ‘reconciliation’ gesture, this time with Abu Dhabi.  That meeting took place on Friday 17th November with the brother of the ruler of the emirate, Foreign Minister, Sheikh Abdullah bin Zayed Al Nahyan in Kuala Lumpur.

Behind the diplomatic niceties of the meeting the real agenda for the discussion was a drive to bring to a close months of poisonous animosity that has raged between the emirate’s sovereign fund IPIC and Najib’s 1MDB, thanks to repayment defaults by the latter on a bail out package for which Abu Dhabi claimed Malaysia owed them a total of $6.5 billion.

Najib’s kleptocracy scams had caught up IPIC’s most senior officials, now jailed in Abu Dhabi, yet the Malaysian PM has steadfastly maintained no wrong doing on the part of 1MDB, let alone himself.

Despite the denials, it is well known that a London arbitration court ruled against 1MDB and that an initial $1.2 billion is now due from Malaysia by the end of this year, the second half to be paid by the end of next month.  It’s left Najib scrambling to find the money, which he has ludicrously pretended is coming from cashing in 1MDB ‘investment units’, which international investigators and the Singapore courts have long since proved were bogus. 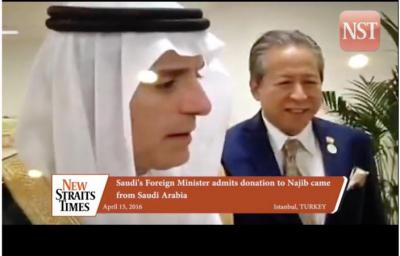 For his part, Najib is plainly anxious to repair tattered relations in the Middle East, particularly since his key contact in Saudi Arabia, Prince Turki bin Abdullah, featured as one of the most prominent figures caught up in the recent anti-corruption sweep of arrests.

Meawhile, the powerful and respected Saudi Foreign Minister, Adel Al-Jubeir, is said to be still smarting over being dragged into one of Najib’s 1MDB cover-up stunts last year

It’s all a considerable mess and Najib’s flagging popularity with Saudi’s close allies in Abu Dhabi will not have been helped by the activities of paid propagandists from the Malaysian Government sponsored ‘cyber-warfare’ unit, who have been villifying Abu Dhabi Royal Family members connected to IPIC, as part of the debt repayment squabble.

For example, certain government sponsored blogs have been publishing illustrated charts alleging global conspiracies, linking all the critics disliked by Najib into one alleged nefarious plot to dislodge him.  The Abu Dhabi Crown Prince has found himself added to this insulting line up! 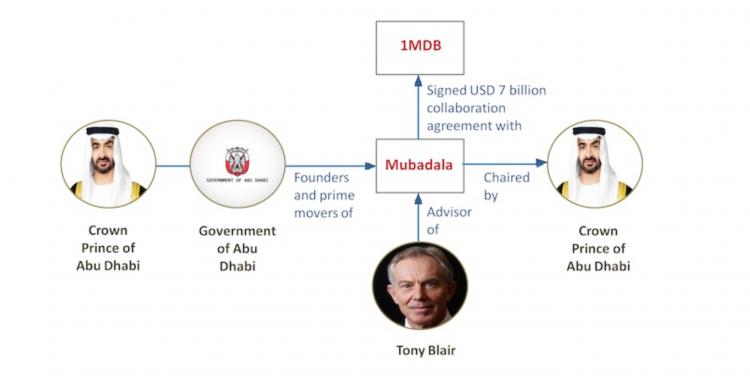 Another brother of the emirati ruler, the IPIC boss Sheikh Mansour, has likewise found himself villified by these semi-official organs, orchestrated out of the Malaysian Prime Minister’s office:

Having started out with a plain agenda to curry favour with the royal families of the Middle East, Najib has succeeded in putting noses out of joint across the region, thanks to 1MDB, but he appears now to be hoping to repair the damage.

Whether all this new sweetness and light all round will convince ordinary voters is another matter. Increasingly, Malaysia has found itself compared to scenarios like Zimbabwe’s, as Najib’s pattern of kleptocracy and repression has unfolded over recent years.  Malaysia’s ruling couple ought to take a look at that present example to see how such blatant looting of public money goes down with members of the public.