PetroSaudi's Prince Turki Is Rounded Up On Corruption Charges In Saudi

For two years Malaysia’s PM Najib Razak has leaned on an implausible explanation for his pre-election bonanza of $681 million in his bank account, which was that it was a kind ‘donation’ from Saudi Royals. These Royals were hinted to be a king and his son, whom current Deputy PM Zahid Hamidi claims also to have met and discussed the ‘donation’ matter with.

The US Department of Justice have, to the contrary, traced the money step by step back to a theft from Malaysia’s own 1MDB development fund, which was controlled by Najib.

Requests that the alleged Saudi royals should be named have always been met with a shrug by BN’s top brass – why should one delve into detail about such ‘untouchable’ people was the official line?  On the other hand, off the record, Najib’s key media spinner, his British communications chief Paul Stadlen, has subtly directed journalists to a BBC article which named the late King Abdullah and his son Prince Turki, who is a former shareholder and director of PetroSaudi. 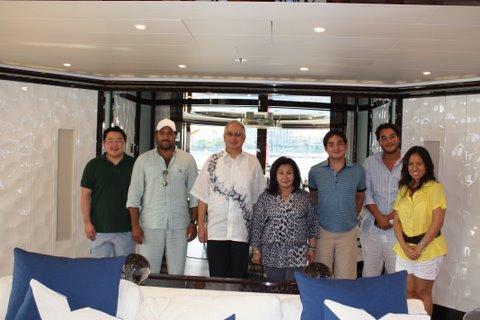 PetroSaudi was the company embroiled in the first major theft from 1MDB, a matter originally exposed by Sarawak Report and now confirmed by the FBI/DOJ court filings on the world’s largest kleptocracy investigation.

Some $1.83 billion was stolen from 1MDB using a bogus joint venture with PetroSaudi during the period 2009-11. At the time this supposed Saudi oil company was effectively a shell, despite being presented to the Malaysian public as a major player in the oil business.

The money trails show that $77 million was paid to Prince Turki in the aftermath of that deal, although most of the cash went to Jho Low, who was Najib’s own proxy in the negotiations. Even larger kickbacks also went to Prince Turki’s active business partner, Tarek Obaid, who has faced investigations into the affair in several countries and is currently remaining in Switzerland.

Prince Turki extricated himself from PetroSaudi soon after the scandal broke and is no longer involved in the company.  He has also taken action over being effectively named as “Saudi Prince” in the DOJ’s original court filings in 2016, which detailed how $24.5 million had been passed from Jho Low’s company Good Star in 2011 to a Saudi Prince and then $20 million of that was passed on to Najib: 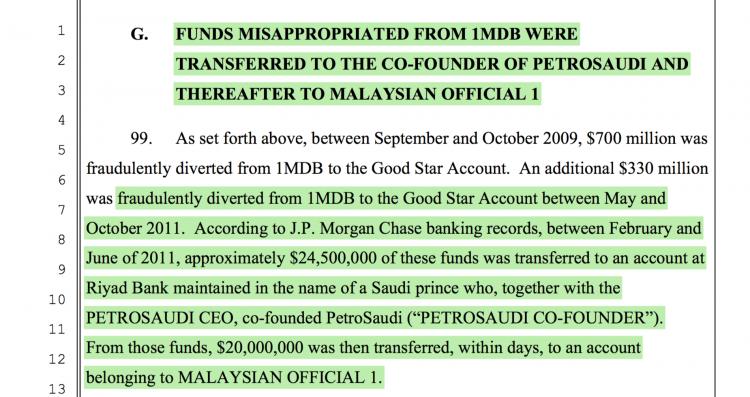 Turki’s lawyers have been pointing out that the most recent version of the FBI filings (July 2017) indicate a more complex transaction that may have distanced the prince through the joint ownership of a company that received the cash.  The revised version of the court document refers to a Riyadh company and Saudi Associates rather than a Saudi Prince:

According to J.P. Morgan Chase and RBS Coutts banking records, between February and June of 2011, approximately $24,500,000 of these funds was transferred to an account at Riyad Bank maintained in the name of two Saudi nationals who were associates of LOW and TAN (“SAUDI ASSOCIATE 1” AND “SAUDI ASSOCIATE 2”). From those funds, $20,000,000 was then transferred, within days, to an account belonging to MALAYSIAN OFFICIAL 1 [updated version of the DOJ court filing]

Prince Turki went on to become Governor of Riyadh, thanks to his powerful connections as the seventh son of the former King Abdullah.  However, he was sacked the day after his father died and now he features as number three on the list of princes rounded up overnight by the new powers that be in Saudi Arabia. 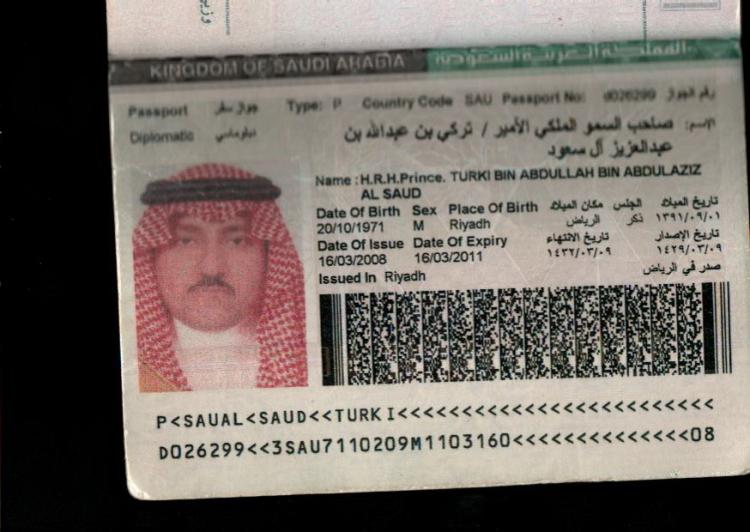 Prince Turki has been incarcerated

He and his fellow princes have been charged with corruption, which makes an uncomfortable prospect for Najib Razak, who has continued to rely on his dodgy Saudi Prince donor story to cover up the vast sums found in his bank accounts by global and domestic investigators tracing the billions stolen from the fund he controlled. 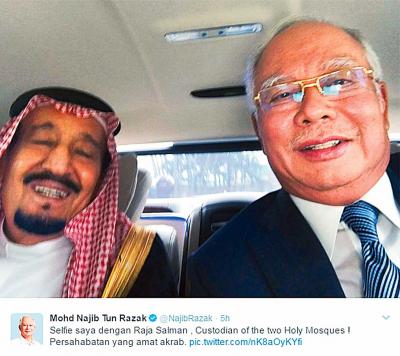 Najib uploaded a ‘selfie’ with King Salman, but the heat has been turned up with the arrest of his key contact

Najib and his wife Rosmah have traded on their supposed good relations with Saudi as a vital part of their bid for respectability.

Najib gloried that he had managed to steal a selfie opportunity with the new King Salman on a visit to Malaysia and circulated it on social media.

He and his wife have hurried to and fro from Mecca to repeatedly and very publicly perform religious obeisances.

Crucially, he was able to stage through his foreign minister, Anifah Aman, a press interview with the Saudi Foreign Minister, in which the Minister said he accepted after all that there had been such a donation.  No details were given and earlier the same minister had denied that Saudi royals had provided Najib’s cash.

There is a view that one trade-off for this willingness by the Saudi establishment to turn a blind eye towards Najib’s domestic corruption issues has been Malaysia’s support of their military adventures against Yemen. Solidiers have even been despatched to join the military operations pummelling that troubled and backward country. 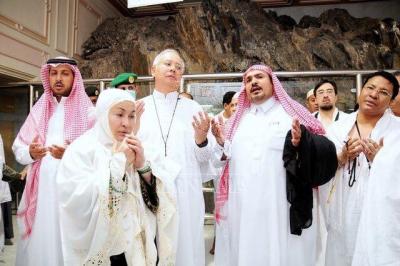 In seeming harmony with this currying of favour, Najib has also bowed towards supporting increasing extremism and intolerance over religious matters in Malaysia, promoting the ‘Islamic State’ agenda of the Saudi-educated leader of the Islamic party PAS, which was perhaps supposed to bring Malaysia in line with the Middle East, but has destabilised relations between communities in his own multi-cultural South East Asian country.

Now, however, the power in Saudi is a young Prince, who says he wants a corruption clean up and to modernise the Kingdom. Even if that means turning on members of his all-powerful Royal Family, once considered so ‘untouchable’.

The Prince, who has effectively taken over all his father’s powers, has also made clear he wants to ‘return his country to moderate Islam’ and to encourage tolerance and openess towards other faiths that will encourage outside investors, as Saudi looks forward to a future where the world no longer relies on its petroleum deposits.

“We want to lead normal lives, lives where our religion and our traditions translate into tolerance, so that we coexist with the world and become part of the development of the world,” he said…Saudi Arabia’s crown prince vowed Tuesday to destroy “extremist ideologies” in a bid to return to “a more moderate Islam.”…”Seventy percent of the Saudi population is under the age of 30. In all honesty, we will not spend 30 years of our lives dealing with extremist ideologies. We will destroy them today and immediately,” bin Salman said. [CNN News October 25th]

So, the question is, where does this leave Najib and the tacit understanding that all his money was a nice gift from the previous King and his son Prince Turki, now arrested on corruption charges?  What will those charges be?

Also, where does the new look Saudi Arabia leave Najib’s growing pact with the old-school Muslim supremacist, Hadi Awang of PAS, who wants to introduce Hudud Law and an ‘Islamic state’ into Malaysia?

This is not the only foreign corruption case that 1MDB’s erswhile partners at PetroSaudi are facing.  There is a developing court case in Venezuela, which is proving very embarrassing indeed and also proving that every word that Sarawak Report has written about the concerns over corrupt conduct over the company’s 1MDB financed investments in Venezuela are founded on fact.

A recent article in the Venezuelan press details that court proceedings have now implicated the fugitive former head of the state oil company and six senior executives in a corrupt contract that was effectively bought by up front cash introduced by PetroSaudi from 1MDB. In return these officials lumbered their own country with an outrageous agreement that guaranteed PetroSaudi vast returns on their paltry investment, which has now ceased to produce any oil at all.

PetroSaudi has been suing Venezuela to honour that dodgy contract, which is an issue that is separately still going through the London courts.  The person who supported that contract and who provided the front required by PetroSaudi, which was posing to Venezuela as a Saudi state linked company, was Prince Turki.  He had performed a similar role in giving status and a sense of official Saudi backing from his father, the then King, at the launching of his company’s joint venture with 1MDB.  This was his opening letter to the Venezuelan authorities, which had been dictated by his partner Tarek Obaid: 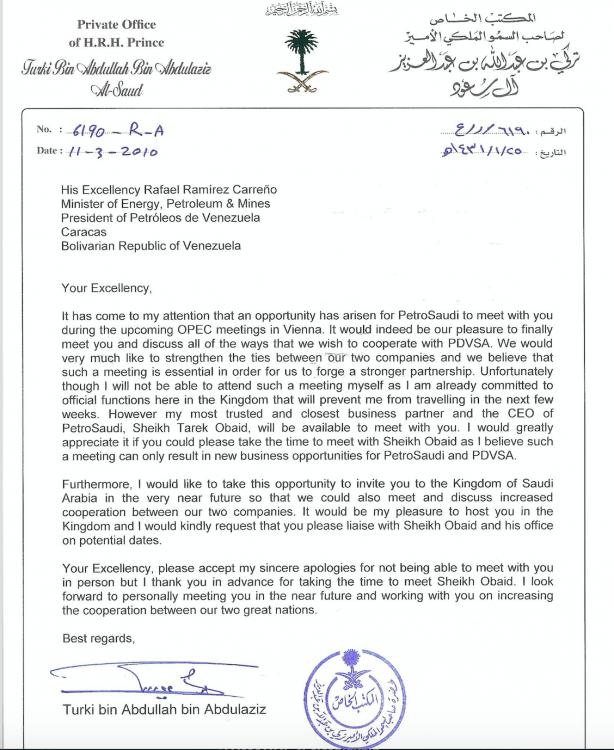 Malaysians, including Najib, must now wait with interest to see what information comes out of Saudi, now that his key ally has been hauled up on charges. 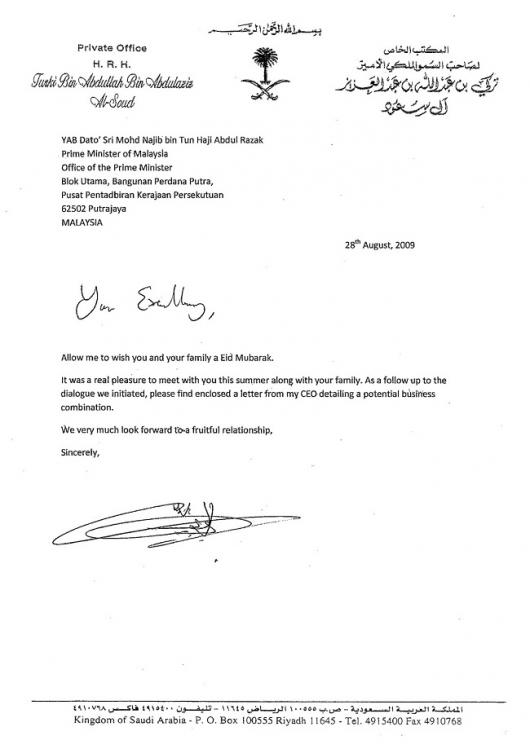 Prince Turki’s alleged  letter to Najib, (released in 2015 by Najib’s propagada unit under the pseudonym of the Lim Sian See blog spot) 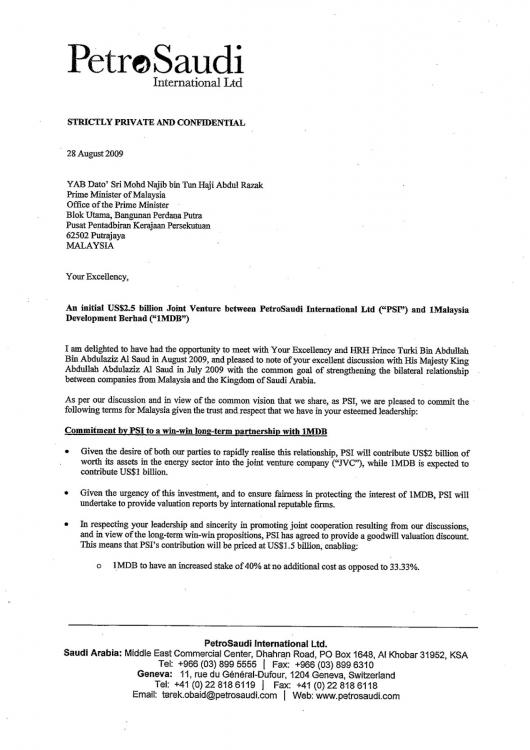