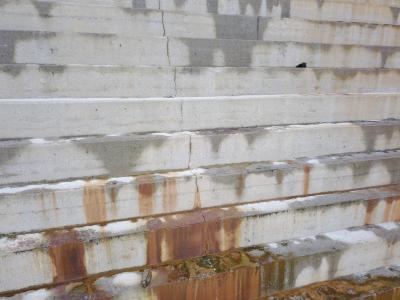 Minister said there were no cracks, merely construction joints

Water is now visibly pouring from several points on the lower face of the newly completed Bengoh Dam, according to dramatic footage captured over the last few days and provided to Sarawak Report.

The public have been barred from inspecting the site, since concerns about a large damp patch on the dam’s outside wall were raised earlier in the month.

However, a team who managed to get past the barriers, has taken several photos and footage that reveal the extent of the problem. 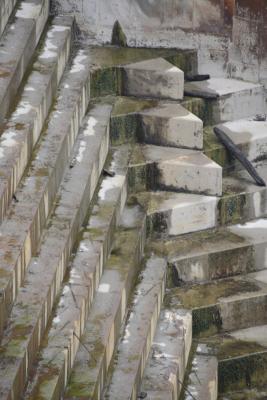 Extensive area of seepage does not appear to match construction joints

Several small springs can be seen spouting water on the outside face, which has developed a large damp patch that has already become moss-covered with a visible rust residue.

The outlets are dotted around the damp area of wall and appear to be unrelated to any of the existing construction joints, which had been earlier explained as the cause of the seepage in official statements.

There are also cracks and seepages at the far right side of downstream face of the dam, say the observers.

The unofficial inspection team even gained access to the control room, located inside the base of the dam, where they say that water is also visibly seeping down the inside walls, although at a slower pace.

“This is where people are monitoring the dam. There are CCTV cameras, generators, lights, electricity, all the control switches and there is water moving down the walls”

a source has told Sarawak Report. 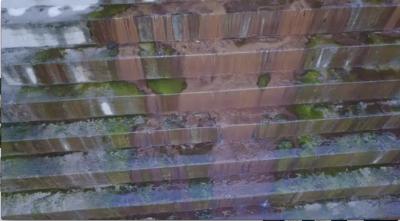 The State Government has released statements to say there is no reason for concern and that the seepage is entirely normal.  The Minister for Utilities, Steven Rundi, issued a press release last week saying that the water was coming through ‘contraction and thermal joints’ that were part of the construction of the dam:

“Some water flow through these joints is expected…. and the wet patch seen on this area is due to this seepage”

the Minister said.  He also claimed that a world renowned UK company, Halcrow (now, in fact. part of the Colorado CH2M group) had recently visited the site in October and declared it to be problem free. He implied that Halcrow/CH2M has been monitoring the situation on behalf of the local contractors, who are Naim Land (a company linked to the Governor’s extended family businesses) and KTA Sarawak.

“The recent lowering of the reservoir water level was in accordance with the operation procedures advised by the dam’s consultant. It was a planned lowering of the water levels … As such, the dam’s integrity and safety are not compromised whatsoever. This was confirmed by the dam consultant and their specialist from Halcrow Consultant, United Kingdom, during his recent periodic inspection visit to the site in late October 2017″ [Rundi press statement] 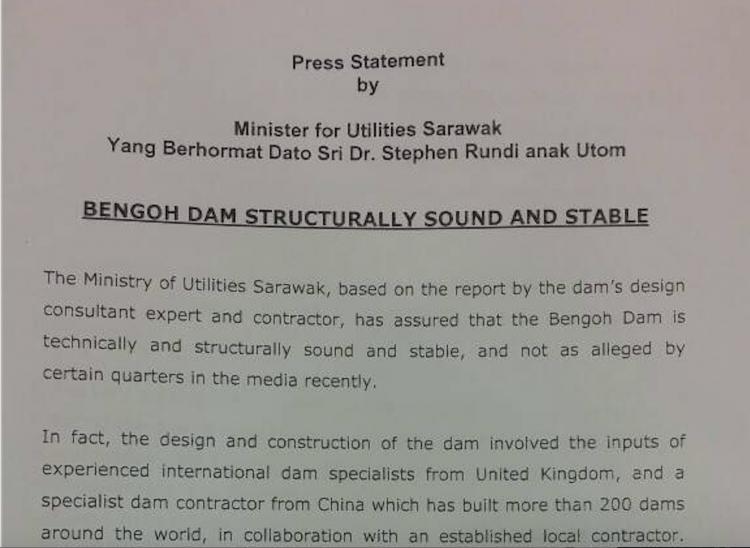 British dam experts have vouched for the safety and construction of the dam, says the Minister 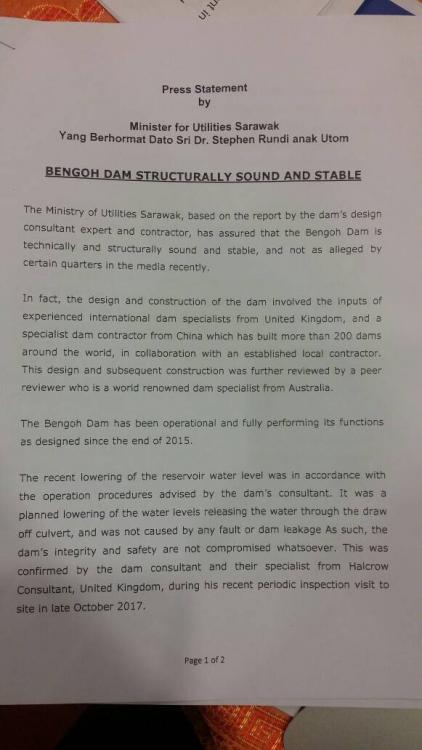 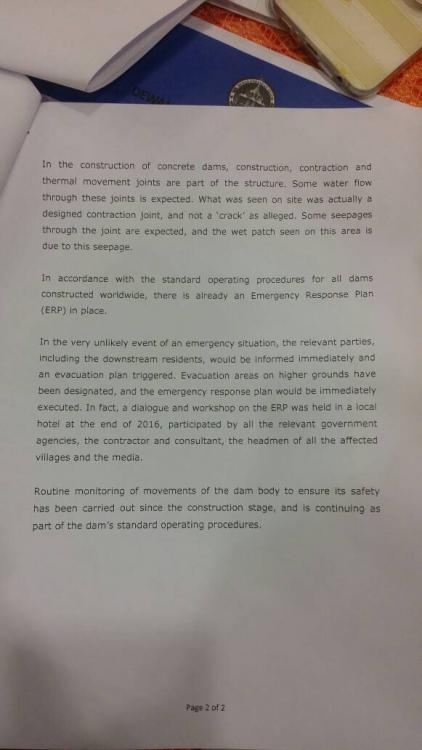 According to Hansard, the Speaker of the Sarawak State Legislative Assembly added to these remarks (unusually addressing the matter instead of the Minister himself) in response to questioning by opposition YBs.

He told the State Legislative Assembly that the Minister had ‘almost given up an entire day of his time’ to the matter of the dam on 14th of November and that during consultations with  the contractor and experts had been reassured that all was well:

“..a consultant from the United Kingdom had flown in and confirmed that the integrity of the dam is not affected. The contractor [Naim Land] whose opinion is based on an experience of constructing two hundred dams over the world assured that the dam is techically and structurally sound and safe. The recent lowering of the reservoir water, water level, was in accordance with the operation procedures advised by the dam consultant. It was a planned lowering of the water level releasing the water through the draw off culvert and was not caused by any fault of the dam leakage.
As such, the dam’s integrity and safety are not compromised whatsoever. This was confirmed by the dam consultant and the specialist fro Halcrow Consultant United Kingdom during his recent inspection site late October 2017″ [Hansard 15th November]

Opposition State Assembly Persons have, however, raised their objections to what appear to be mixed messages in these statements. If the leakage is common and to be expected, why has the dam level been lowered for repairs, they want to know?  They are also questioning why so far no maintenance or repair personnel have been seen doing anything active on the site?

Furthermore, there has now been back-tracking on the original explanation about construction joints, says Batu Lintang MP, See Chee How.  The leaks are plainly not linked to specific joints.  Besides, he points out, modern advanced “waterstop” engineering technology has now overcome the earlier problems of leaks developing along such cracks, which had occured only after several years with older dams.

Bengoh has only recently been impounded and the leaks are not along the joints, the state legislator has pointed out:

“I will be seeing the Speaker about what was a misleading ministerial statement to legislators. The minister misled the Speaker into misleading the State Legislative Assembly thereby commiting a grave contempt. I am sad that the government is not giving due urgency and consideration to the threats posed by the seepages.”

‘We Don’t Have Much To Do With That Project’, Says Halcrow!

Sarawak Report has also contacted the UK company Halcrow, which was cited by the Speaker during his reassurance to the State Assembly that the Bengoh situation is perfectly normal and non-urgent and is, moreover, being managed by international experts.  His parliamentary statement also implied that the company’s consultants have confirmed the dam is ‘sound and stable’ having been “much involved in the construction”, which was to “international standards”.

The Speaker went so far as to name two British experts from that company last Wednesday:

“The same expert, precisely from Halcrow, now with CH2M-Jacobs, Mr Anthony Morrison, was engaged by the local consutant to make the periodic inspection. He stayed 6 days in Kuching in October 2017.
The agreement signed between the local consultant and Halcrow remains valid, with Halcrow’s responsibilities assumed by the take over company… Besides Anthony Morrison, Halcrow’s dam specialist geologist, Mr Michael Palmer, was also very much involved in the dam design and construction…..
The dam has been constructed to international standards. The consultants are duty bound to give their professional comment that the dam is structurally safe and sound. Seepages through dams are normal occurrences. However, good engineering practices require that the seepages should be patched up as much as possible as a serviceability issue and not that the dam’s safety is compromised.  The contractor is continuing to patch up the areas concerned. This will likely take up to 6 months to complete…
There is no urgency. The Minister is in the know, the consultant are there, the contractor gives an opinion based on experience of constructing 200 dams all over the world and then experts coming in from UK, and so forth.  Now, I do not wish you to contradict the experts and the consultants… “

Having thus explained that the situation was under control and being monitored by top international consultants, the Speaker then refused to allow a vote on the motion put forward by opposition MPs.

When contacted, however, Michael Palmer told Sarawak Report that he has not personally been to Sarawak for several years. He confirmed his colleague Andrew Morrison did visit in October, however he commented that “we don’t have much to do with it [Bengoh] these days”.

Mr Palmer then referred Sarawak Report to his media team in Colorado for any further comment on our questions.  We have asked for clarification on the exact nature of Halcrow/CH2M’s relationship with the Bengoh contractor:

Given your company was referred to formally in the State Parliament last week as the primary source of assurance that this seepage is being expertly monitored and that, thanks to yourselves, the dam structure has been given a clean bill of health, a statement on the role of Halcrow/ CH2M at Bengoh is important to have on record.[our question to Halcrow]

Opposition Assemblyman See Chee How has expressed concern that the company stated to be monitoring the situation has itself said that it has not much to do with the matter any more. He is seeking an urgent meeting with the Speaker, in order to show him the latest video footage and to discuss the response of Michael Palmer to Sarawak Report:

“It certainly appears that the seepages are much more serious than what the minister had tried to portray in the august House. For the Legislative Assembly to perform its full functions, it is the duty and responsibility of the ministers to provide accurate, truthful and full information. By giving a statement which contained words which were later found not to be true, the minister may be censured for committing a grave contempt.”

Sarawak Report has also raised further questions about the Australian expert cited by the Speaker:

the Speaker told Parliament.  However, later in his speech he made the following point also:

“Reports available:
3rd party Audit, carried out by JP Wahba and GHD Australia, indicates its acceptable, carried out in 2013. A new audit is planned for at the end of 2017/2018.

Sarawak Report asks if the latest audit carried out by this 3rd party independent body was in 2013, what possible reassurance does this provide over the present situation and a leak that could hardly have been predicted three years before the dam was even completed?