Sarawak Report has submitted a 20 minute recording, recently released into the public domain by Amanah, as further evidence in its defence of the libel case brought by PAS President Hadi Awang against this website in the UK High Court.

It purports to feature senior PAS member Nik Abduh admitting the party has received millions in cash from UMNO.

Nik Abduh has called the recording a fake and PAS Secretary General has described it as a ‘waste of time’ to investigate whether the recording was of Nik Abduh or not.

However, Sarawak Report has received a complete copy of what it believes is the original version of the recording, which has been expertly transcribed and is currently being forensically tested, following extensive corroboration that the recording is genuine and the speaker was indeed the then PAS Youth Leader, Nik Abduh.

During the remarks, made to a delegation of PAS members (one of which claims to have recorded and then forwarded the speech in defiance of a threatened curse by Abduh) the then youth leader apparently makes a number of key acknowledgements, including that top echelons of PAS, including himself, have been complicit over the receipt of millions of ringgit from UMNO, in order to further the party’s political agenda.

The President of the party, Tok Guru Hadi Awang, had determined this to be acceptable, as long as the money is used for ‘Islamic Purposes”, the speaker told his listeners:

Among the reasons why we succeeded was with UMNO’s help. UMNO helped us to achieve victory. In 10-11 of these activities. That is us being smart. Umno is stupid. Why do people keep asking us about UMNO’s money? This issue is now over. Tok Guru Nik Aziz took a considerable amount of UMNO’s money. Not a problem? Tok Guru Harun Din, not a problem. This meeting today not a problem.

…. I have met Tok Guru Haji Hadi. Tok Guru Haji Hadi said it was good for us to take UMNO’s money. Just do whatever we want. But do not use the money for our private matters. For our personal gain. Instead, use it for Islamic purposes. That’s why we have good relations with UMNO today…

It was why Najib could accept amendments made by MT [PAS Council] members.” [TRANSLATION]

The meeting, which allegedly took place some time in late August last year, followed several days of angry debate amongst PAS leaders about the issue of receiving money, much of which had been reported publicly.

A youth leader named Nurul Islam had publicly acknowledged on a new media chat group that he had attended an occasion, where twelve people had met with Party President, Hadi Awang, in his capacity as Vice Chairman of the International Union of Islamic Scholars.

Nurul Islam had claimed in his postings that Hadi had approved the taking of money from UMNO at the gathering and claimed that other named fellow attendees could also testify that he had.

Nurul Islam later uploaded a photograph of the event as he rebutted angry responses and said that allegations that he himself had taken RM2 million were untrue.

The resulting fracas saw Hadi’s son-in-law, Zaharuddin Muhammad, wading in.  He publicly announced that the claim that Hadi had given a green light in favour of taking UMNO cash had to be untrue.

Zaharuddin said he had indeed contacted others from the group, who denied Hadi had issued any such fatwa [legal opinion] ruling that it was acceptable to take money from UMNO.

As his son-in-law, Zaharuddin wrote that he knew Hadi better than Nurul Islam did and that Hadi was very scrupulous about where he took money from.

The matter blew up further during the Parliamentary session at that time, when Zaharuddin allegedly confronted Nik Abduh, a known protagonist  of cooperation with UMNO, about the matter, an incident apparently referred to by Nik Abduh in the recording as being ‘stabbed from the front’. 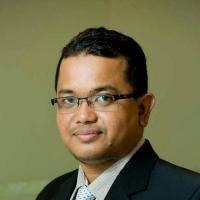 He urged PAS ‘friends’ not to fall out with each other, but to work things out as he then went on to discuss what he said he knew to be the true situation on the matter.

The meeting at which the recording is said to have taken place, had apparently been requested after that public row by Zaharuddin, in order to discuss the matter with Abduh and reach the truth. It is understood to have taken place around late August and that Zaharuddin came to meet Abduh with a number of colleagues. Abduh is heard telling them that he will explain the truth of the situation, but there must be no recording and the matter must be kept secret between themselves:

“Actually, if you want to know how the story goes, I’ll tell you. I just want to ask you not to tell anyone else.
Yes, if you do tell, I’ll curse you so that you turn to ash. If you do, you’ll become dust.
I want to tell you the true story. Tonight, I want to reveal the truth about Ustaz Zaharuddin. I blame Ustaz Zaharuddin for the conflict. He did not back stab. He stabbed in the front.
I want to say something, I have asked you not to get into issues involving friends. It is wrong to have prejudice among friends. [TRANSLATION]

The speaker then engaged in a lengthy explanation telling his audience why he knows better than the angry son-in-law of Hadi about what is going on at the top of the party. As the son of the former Spiritual Leader he too fell out with a son-in-law, who thought he was privy to all party secrets because of the relationship.  In fact, he mocks, there are many party secrets that sons-in-law do not get told.

What he then confirms is that Nurul Islam’s statement that PAS has accepted millions of ringgit from UMNO was correct and claims there is nothing wrong with this, because the money is being used to pursue the party’s political aims and purposes.

In response to the release of the recording Nik Abduh has issued a statement to say that it is a fake and the above remarks were not made by him.  He has said the claims are all a lie.

PAS Secretary General Takiyuddin Hassan has also issued a statement saying the matter is “too trivial” for the party to launch any immediate investigations into the authenticity of the tape.  According to Berita Daily Takiyuddin said this was because the matter was concocted by PAS’s enemies:

PAS secretary-general Takiyuddin Hassan said there was no reason to investigate Nik Abduh Nik Aziz on the matter which he said had been concocted by PAS’ enemies.
He was referring to calls being made by Kelantan Amanah for PAS to investigate Nik Abduh and his supposed claims of receiving money from Umno.
“This is a trivial matter… we will still look into it but at our pace and we will not be pressured to do so by Amanah leader Husam Musa.
“It is a waste of time,” he told Berita Daily when contacted.
He downplayed Husam’s eagerness for PAS to thoroughly investigate the matter, adding that PAS had no reason to probe if the voice in the audio belonged to Nik Abduh or not.

Sarawak Report believes, on the other hand, it has been passed the recording by a credible source and that several indicators corroborate that the tape is genuine and the speaker is indeed Nik Abduh.

We have therefore applied to have the new evidence added to the defence against President Hadi Awang, who has sued this website for stating that there is a widespread belief in Malaysia that Prime Minister Najib Razak has been financing PAS as part of a strategy to break the opposition alliance against UMNO.

Sarawak Report has invited PAS, Secretary General Takiyuddin Hassan and Nik Abduh to comment on this matter, but at this point none have replied to that request.

Hadi’s libel case rests on his claim that a statement by Sarawak Report made in 2016 referring to financial support of PAS by Najib would be understood to mean that he personally was accepting cash.  The first hearing of the case before a judge will take place April 30-May 2nd, at which this application to include the extra recorded evidence has also been submitted.

Sarawak Report has also applied for the case to be stayed, alleging intimidations, intereferences and abuses on behalf of the litigant against the defendant and witnesses and has counter-sued for damages in the light of those abuses.

Hadi Awang’s claim against Sarawak Report can be obtained by clicking here.

Sarawak Report’s defence and counter-claim, together with proposed amendments relating to the Nik Abduh recording, can be obtained  by clicking here.