The transaction was a recent drip feed of RM2.5 million in cash into two of PAS’s key party funds, that took place on 21st March.

Sarawak Report has received information from what it believes is a reliable source about what happened. On that date an individual, whose current official title describes him as being a special officer linked to a treasurer of UMNO, presented himself at a Bank Islam branch in KL clutching a bag of cash amounting to RM2.5 million.  As one does. 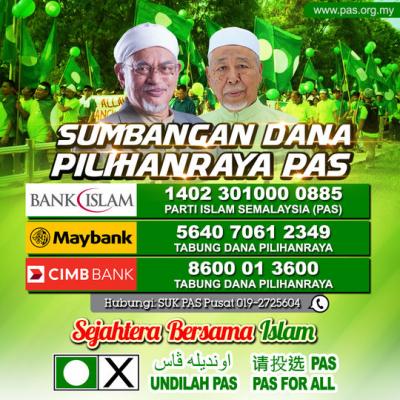 Without apparently batting an eye, this bank had proceeded to process the cash at his request into the two PAS accounts:

RM1.5 million went into the Tabung Pembangunan JPP PAS Pusat account number 1402 301002 8183 held at the bank, which is advertised in the party’s fundraising (right).

Another RM1 million went into a trust account managed by three prominent PAS leaders in Terengganu, who also control a private school that has started to receive large cheques under the government’s new policy of supporting PAS Islamic schools.

The three individuals were YB Saitiful Bahri Mamat, Shukrimun bin Shamsudin and Muhydin Abdul Rashid, according to material that has also been viewed by Sarawak Report. 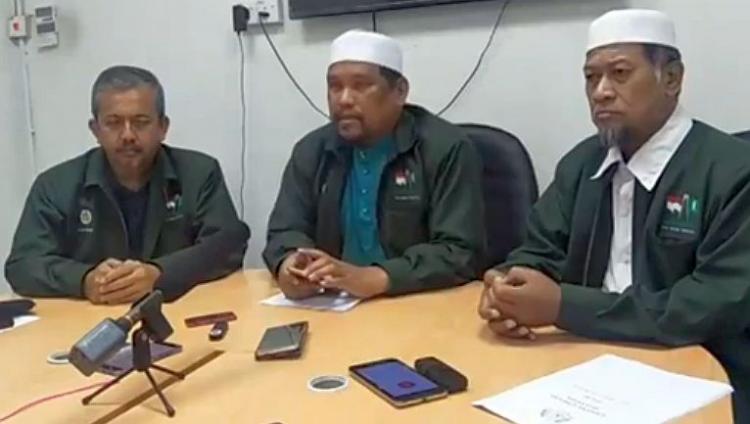 PAS has denied that the money came from UMNO and it has refused to name the individual who walked into the bank.

However, on April 6th one of PAS’s most senior and vocal ex-members the MP Mahfuz Omar (who only resigned to join Amanah at the turn of the year) made the first of a series of statements about the transaction, naming a certain Shamsul and asserting the money was from UMNO.  By the next day the details had appeared in an anti-PAS campaigning Facebook Page, named Ana Tahu. 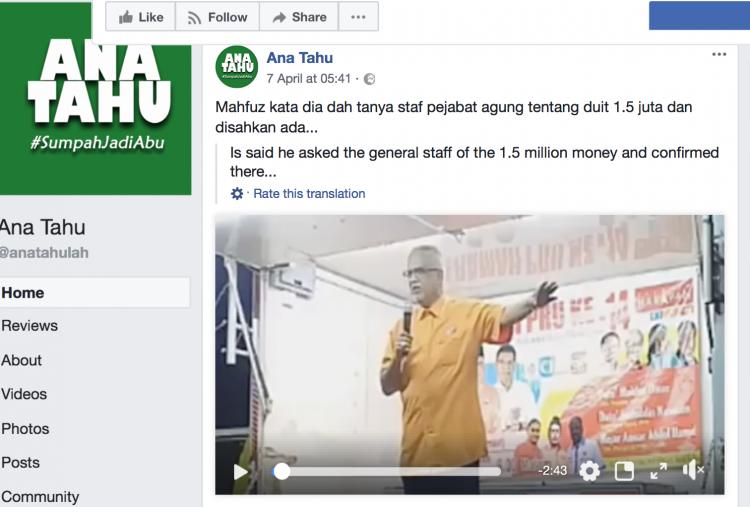 The blog challenged PAS to deny the payments

The goading continued with more speeches and in other blogs, whilst certain pro-PAS outlets retaliated. Hadi’s close friend and self-professed proxy to Najib, the blogger RPK, for example, suggested that Dr Mahathir had paid the MP to tell this as a lie to assist in a London court case related to allegations of payments to PAS (involving Sarawak Report). 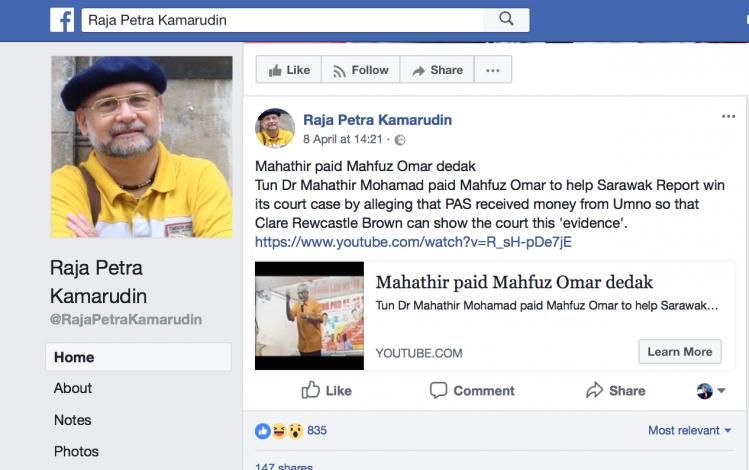 However, in the past few days official PAS spokesmen have taken a different tack. The three Terengganu PAS account trust holders first held a press conference on April 16th to deny they had received any money from UMNO, accusing the MP of slander

“I want to make it clear that Terengganu State Pas denounces the allegations and defamation that PAS Terengganu has earned from Umno..That is an accusation, a false slander made against Terengganu Pas” [Satiful Bahri Mamat, Malaysian Dateline, translated]

It was correct, he acknowledged in the recorded session, that these two payments were indeed made by an individual on 21st March into the two PAS party accounts as alleged (he apparently did not deny or explain why the huge payments were made in cash).

However, he said it was a lie and calumny to say that the payments were from UMNO. 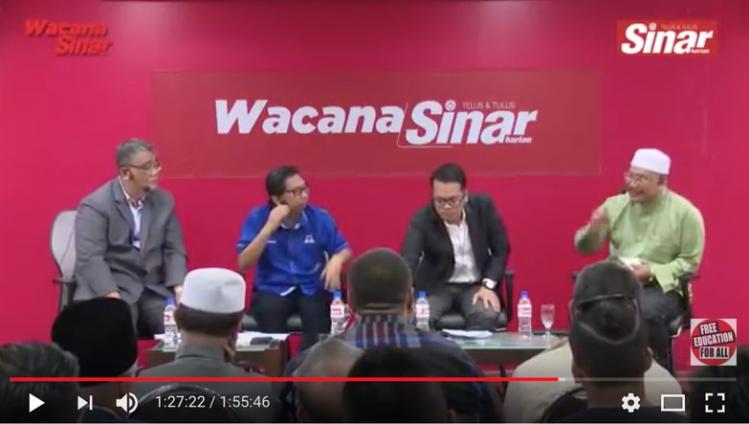 “This was a donation from an individual, not from Umno. It did not come from the Umno office,” Zuhdi told a forum organised by Sinar Harian in Shah Alam yesterday.
Expressing gratitude to the donor, Zuhdi, however, did not name the individual.
“That is why we say ‘thank you’ to the person who donated – thank you.
“After this, if there is anyone who wants to donate RM5 million, Alhamdulillah,” he added. [Malaysiakini]

PAS is therefore now acknowledging that whilst their former senior member, Mahfuz Omar MP, had indeed received correct and detailed information about these recent extraordinary cash deposits of two and a half million ringgit, he had chosen to  twist one key fact, by lying about the identity of the individual who had staggered into the bank with the donation.

The donor was an individual (clearly a highly wealthy and generous individual) PAS now accepts, but the party is not prepared to acknowledge who he is.  On the other hand Dr Zuhdi, on behalf of PAS, has categorically denied the individual represents UMNO or that the money originally came from UMNO.  They expect Malaysians to take this matter on trust, end of story.

Sarawak Report would like to point out that this half-way position is simply not good enough when discussing such enormous sums of money coming into a political party.  Malaysians have already started drawing parallels with the coy refusal of Prime Minister Najib to name the alleged Arab prince, whom he claims donated him a billion dollars, that the US Department of Justice says it has traced back to money stolen from 1MDB.

PAS claims it has higher standards and its President has just announced that it is the ‘clean party’ in this election. Therefore, surely such a refusal to name major cash donors is unnacceptable?

The benchmark for any properly run democratic party the world over is that the sources of large donations must be openly declared, for reasons that are obvious and numerous, but which all relate to the avoidance of tainted money and undue political influence by hidden interests. 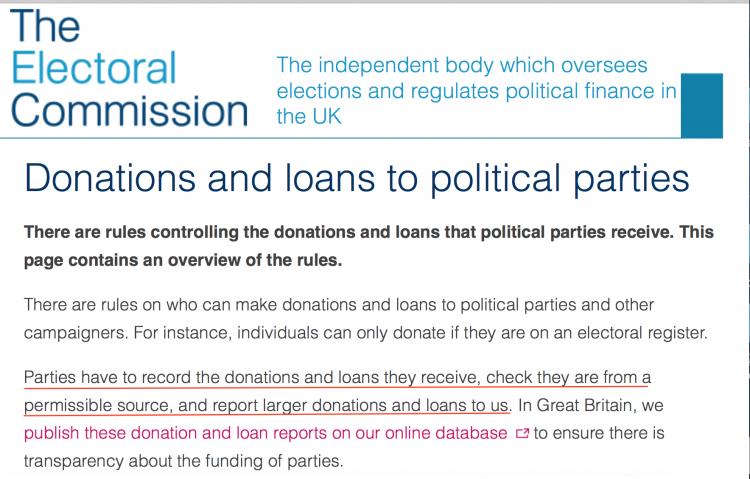 Ensuring transparency – the way it is done in Britain

Much as people might wish to believe politicians who declare themselves to be holier and cleaner than other politicians, those politicians ought nonetheless lead by example and open up their books in a proper and transparent manner, before brazenly asking for a further RM5 million from more ‘individuals’ as Dr Zudhi did yesterday.

Certainly, less wealthy PAS members can think about putting their money back in their pockets.  When asked how the party was going to fund the RM34 million it will cost to fight a record 160 seats (more even than UMNO itself) leaders explained that each of its million members should pay RM34 each.

It seems the party can in fact rely on a small number of individuals to do the job and is succeeding in raising mega-donations in a manner it has famously been unable to do in the past.

So, there is a simple way to stop the slander.  Name the individual who walked in with RM2.5 million in cash and deposited it in your bank account or give the money back.