“Shameless!” is the title given to a popular TV show where grifters, who live off society instead of earning a resposible living, are exposed to an audience that gasps in amused outrage at their bare-faced, blatant dishonesty and deceit.

Fortunately, these characters are supposed to represent the lowest of the low and not the country’s top decision makers and international representatives.  However, for mortified Malaysians it is their own PM who is currently making the same sort of spectacle of himself, as he openly exhibits every possible shameless manoeuvre to bribe voters and bend and abuse the rules to retain power.

Witness this weekend, how at a giant stadium hosting a fancy, colour-cordinated staged event, costing millions of ringgit, to launch their manifesto, the PM told the thousands bussed in as camera-fodder that there would be a doubling of BRIM payments – for the two months just before the election.

That act of dubious legality (given it took place after the dissolution of Parliament) formed the PR centrepiece of Najib’s “Manifesto” and BN expect voters to thank them by giving this kleptocrat the keys to the Treasury for another five years.  Shameless! 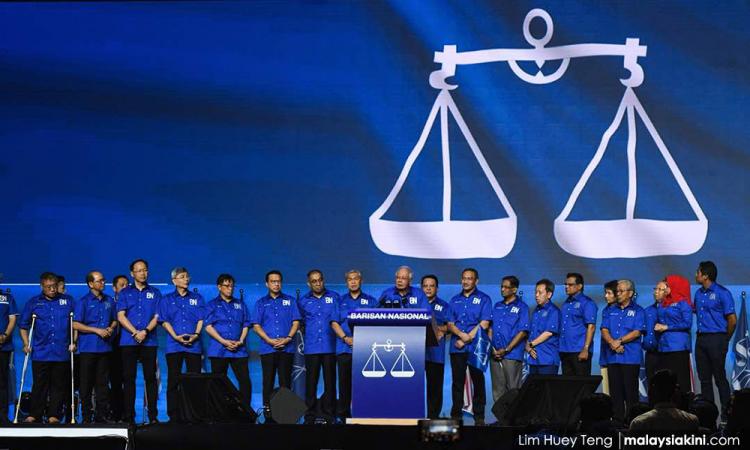 It’s nothing new, of course.  This is the politician who was caught openly on the hustings bribing Sarawak voters with a promised handout of public money – but only if and after his by-election candidate had been voted in.

“You help me and I will help you… I keep my promises!” was the slogan he employed on that occasion, as he set out his proposal for a mass bribe, designed to corrupt an entire community. Utterly shameless already in 2010.

Indeed, Najib has behaved like this for so long, dishing out money in all directions, that he clearly believes he has proved a point, which is that the entire country has been corrupted by the political party which he represents.  Big bribes for the high ups and smaller bribes for the lowly: “Cash is King” was how he allegedly expressed his logic to Dr Mahathir.

So, for the cheap dedak, we have already seen the bags of rice emerge, emblazoned with the pictures of the various BN candidates who are hoping to receive grateful votes in return. Shameless! 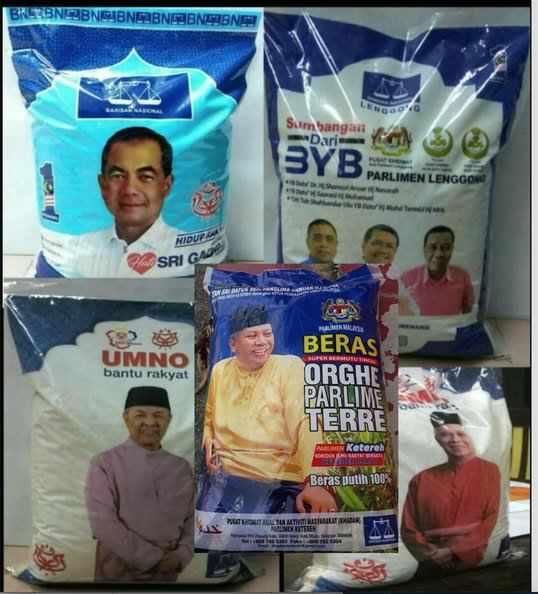 In return for your vote!

Those voters should demand these kind gentlemen account for the money that bought these bags of rice – last election it was 1MDB stolen cash, handed out in vast cheques by Najib to UMNO HQ.  In other words voters were being told to be grateful to recieve back a small part of their own stolen money and hand power back to BN in return.

It seems that Najib really thinks he can treat Malaysians like protitutes from Port Dickson, handing them an extra tip before he demands the favour.  Since that is what he plainly thinks of his own people, the rest of the world are left to watch and see if he is right.

Gift From A ‘Burgeoning Economy’

Of course, Najib did pluck out an excuse for his oh-so-convenient hand-out announcement, straight after he had disolved Parliament and on the eve of the election.  His claim was that it was made possible thanks to Malaysia’s brilliant growth figures, owing to his amazing stewardship of the economy.

The trouble is that who can any more believe a word the government or Najib says (if they ever did) or indeed any of the figures published under his management of the Ministry of Finance?

The man has been proven such an out and out liar so many times over the past years, as he has wriggled to cover up scandal after scandal of his own making, that he has been forced to pass a law that commands Malaysians to repeat obvious lies propagated by the government and forbids them from repeating concrete facts recognised the world over.

Dashed through the pre-election parliament in a fashion denounced by the United Nations and NGOs across the globe, Najib has dubbed his order a law against ‘Fake News’.  Sadly, the Fake News comprises the ludicrous lies and propaganda he has been pumping out to cover up his misdemeanors and not the obvious truths that Malaysians are now banned from publishing or passing on to friends.

For example, the fact that Najib’s step-son Riza just paid a $60 million fine to the US DOJ, as a plain admission that the money had been stolen, as claimed by the DOJ, from 1MDB, is now categorised ‘Fake News’.  So is the fact that the FBI just seized a super-yacht in Bali and have been granted custody of it by the US courts on the grounds that Jho Low bought it using stolen 1MDB cash.

Both these facts are being categorised as ‘Fake News’, because Najib’s BN government spokesmen have declared no money was stolen from 1MDB and they have denied Jho Low was the owner of the yacht (even though the porky tycoon openly contested the confication in a US court last month).

With a government that is prepared to enforce such a tissue of ludicrous lies Sarawak Report considers every announcement to be unfortunately suspect, including the supposedly burgeoning economic figures that are being bandied about and the supposed ‘bouncing back’ of the ringgit announced by Najib’s recently appointed Governor of the Bank Negara.

Sarawak Report would feel safer in giving credence in the long-standing former Deputy of the Bank, who recently retired in protest at being asked to do things he regarded as shocking and unprofessional.  Given Najib’s track record, we have little doubt that massaging economic figures and artificially pumping the ringgit would rate as small beer in his apparent quest to mug Malaysians of all their cash.

Certainly, it is plain as daylight that there is nothing, repeat nothing, this PM would be prepared to stop at, in order to achieve this re-election and secure his position against prosecution for a litany of crimes that now loom over the man, who appeares to consider that high office offers total immunity from any kind of prosecution for any kind of crime: cover-up of murder, perversion of justice, false imprisonment, massive theft – you name it.

Such shameless and blatant manoeuvres have, just in the past few days, included the ramming through of an outrageous gerrymandering of constituencies designed to retain BN in power with as little as 16.5% of the popular vote.

He did that thanks to an existing gerrymandered majority of seats, despite his loss of the popular vote. UMNO has taken good care over the years to make sure it controls the ‘independent’ Election Commission. Shameless! 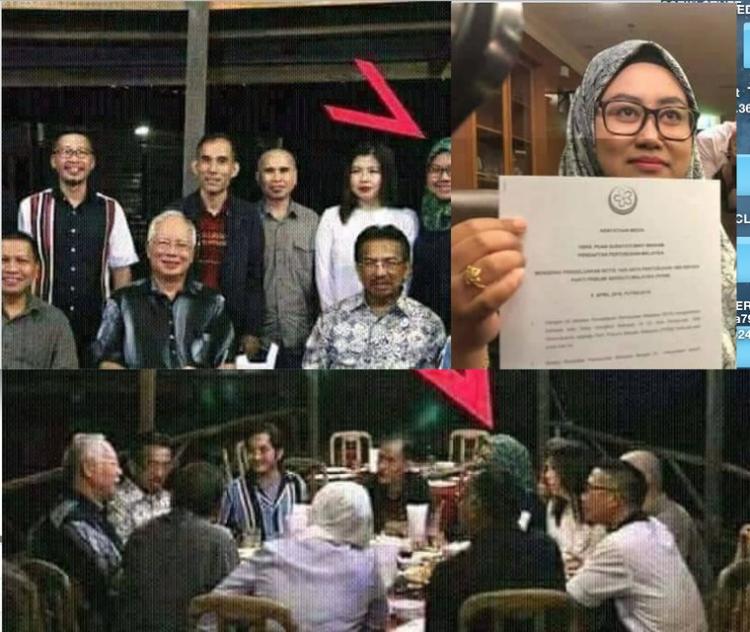 Infuriated netizens have circulated this series of pictures showing the alleged cosy relationship between Najib and the Director of the Register of Societies, seen here enjoying a dinner together with Sabah party boy and fellow Kleptocrat, Musa Aman

Not content with merely rigging the seats, of course, the cornered PM has sought to bolster his position even further, by the simple act of vetoing the opposition!

This he achieved thanks to a helpful last minute ruling by the Register of Societies, which simply declared the day after Parliament was disolved that the main Malay opposition party Bersatu (led incidentally by Najib’s most formidable political opponent, Dr Mahathir himself) was no longer ‘legal’.

How come?  Thanks to outdated legislation designed to control a communist insurgency in the 1950s, whereas in genuine democracies anyone can set up a political party and run it according to their own agreed rules, in the phoney democracy of Malaysia, people have to ask permission to associate from the government controlled Register of Societies, which operates entirely at the convenience of the ruling party itself.

This ROS decides the rules for the party and then rules when these are broken and the party is then de-registered.  The lady Director of the ROS, who declared Bersatu ‘illegal’ last week failed to make her reasons clear, but it was plain to everyone that her orders to do so had been clear enough – from the boss Najib.  Shameless!

Malaysians are now to be treated to weeks of enormously expensive posturing and grandstanding by these awful old hypocrites from Najib’s line-up of super-wealthy fellow kleptocrats.  The TV screens and client media will be stuffed full of scenes of them handing over cheques, patting the heads of ‘simple folk’ and acting holy in the mosques.

It is how Najib has fought every single election so far (including one he nearly lost, before he worked to gerrymander his own seat).  He reckons that Malays are just there to be bought and that politics is about judging the right price and nobbling the opposition, before tucking into the spoils of office – and he is totally shameless about showing it!

UPDATE – Shameless List!
No sooner had this article been completed than another whopping great shameless gesture in the 3 year extension of the tenure of Najib’s embarrassment of an Attorney General was announced.
This was the crony appointed in the place of the illegally sacked former AG, who’d drawn up a charge sheet against the PM for stealing millions. Apandi was the buffon who publicly declared that investigations had concluded Najib was innocent after all, whilst holding up the papers that proved they had actually found Najib guilty!

Given these shameless actions seem set to continue unabated, Sarawak Report proposes to draw up a Shameless List of the ‘Dubious Skipper’s’ past and upcoming shennigans over the coming days. Feel free to contribute examples to [email protected]