Sarawak Report has been warned Malaysians should be prepared for the discovery that the vast sum of money found at Najib’s property in the KL Pavillion building (RM114) was merely petty, housekeeping cash, compared to what the lady of the house was storing in her various bank accounts over the years.

We understand it amounted to billions of ringgit.

This website already revealed back in 2015 how one Roslan bin Sohari had paid a total of RM2 million in cash, through eight separte transactions, into Rosmah’s Affin Bank account No-1000 2000 0058, between February and April 2015 alone.  He had brought the money in cash. 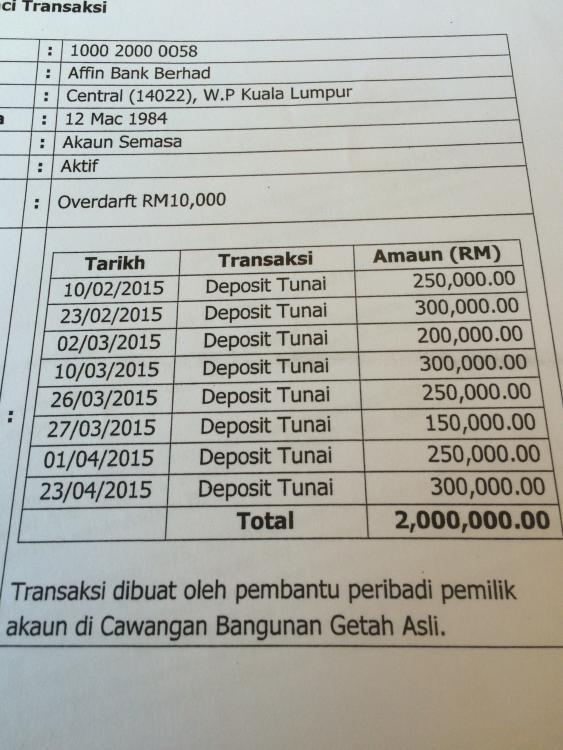 Popping a bit of housewife’s petty cash into the bank?

Roslan Sohari had responded by denying he worked for Rosmah and calling Sarawak Report’s story a fake.

However, a perusal of his own Facebook page soon revealed that a man of this name had been travelling around the world on the exact same dates as Rosmah and Najib over previous months and years, staying at the very same luxury five star hotels.  He had faithfully posted pictures and details of himself on these trips to prove the point. 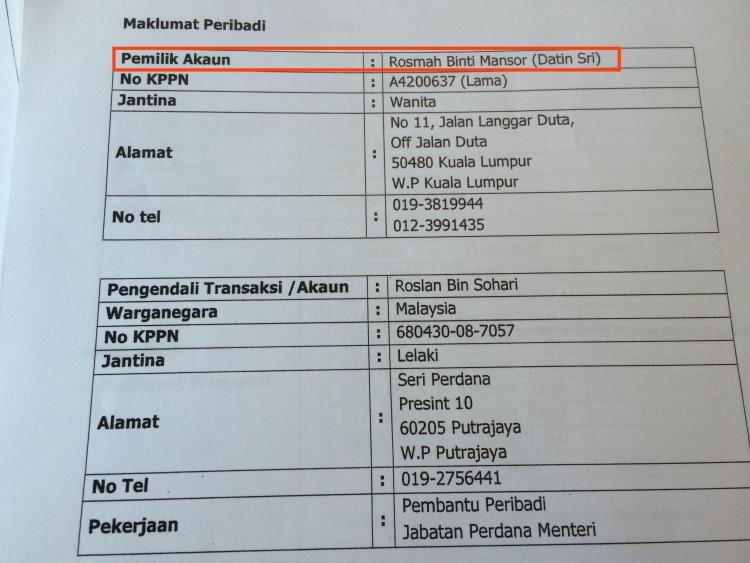 Roslan denied all at first

Moreover, the Whatsapp contact for the number registered as being Sohari’s by the bank also showed the same photo of him standing in front of the Paris Arc de Triomph as one he had used on Facebook. 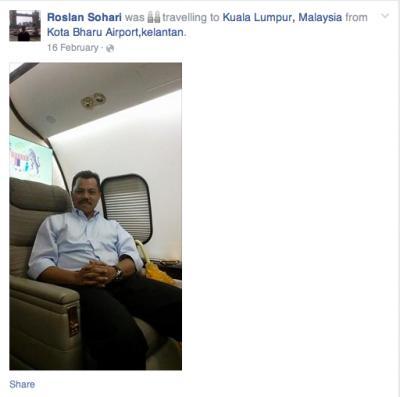 This chap on Facebook (before the site was hastily pulled down) advertised himself as none other than the Resident Manager of the Prime Minister’s Office, reflecting the bank documents, which described his employment as ‘Personal Assistant in the Prime Minister’s Department’.

In short, the number given by the bank as belonging to Roslan Sohari, the man who brought in money for Rosmah’s bank account, tallied with  the Whatsapp’s phone directory and profile picture for a person of that name.

And that picture identically matched the man who had a Facebook account under Roslan Sohari, who claimed to work for the Prime Minister!

As late as last year, Sarawak Report learnt from separate sources that Roslan Sohari was a member of the large entourage that checked in with the former Prime Minister and his wife to the Trump International Hotel in Washington DC, where they had come to visit the US President, who owns the hotel.

Sarawak Report has received further undocumented information about this and related accounts, from sources it has reason to believe. Back in 2015 these sources confided that Rosmah held no less than RM2 billion in this Afin Bank and related accounts in other banks.  We now understand that the sum in fact topped RM4 billion ringgit, but that much has been transported out.

In which case, investigators and asset tracers certainly have their work cut out. Malaysians will want to see that money back and will surely be interested to know what excuses the former ‘First Lady’ will provide to explain such sums and whether they will be any better than her husband’s?

Will they involve more election donations or perhaps selling the rights to her singing, writing and other talents to eager businessmen (yet to market the precious products)?  Have her bomoh’s learnt to magic cash from thin air?

Or are the numerous reports that have been circulating true, which is that this ‘First Lady’ had been getting her talons into every government contract going, from armourment purchases to the sales of state lands and development deals, with a demand of anything up to 60% on the profit in return for that precious signature from her husband?

Her former close confidant and business partner on such deals, Deepak Jaikashan, is on record saying her stated ambition in life was to top the wealth of the Sultan of Brunei. Thanks to the investigations now under way, Malaysians ought soon discover just how near she got to achieving that goal, before interrupted by GE14.